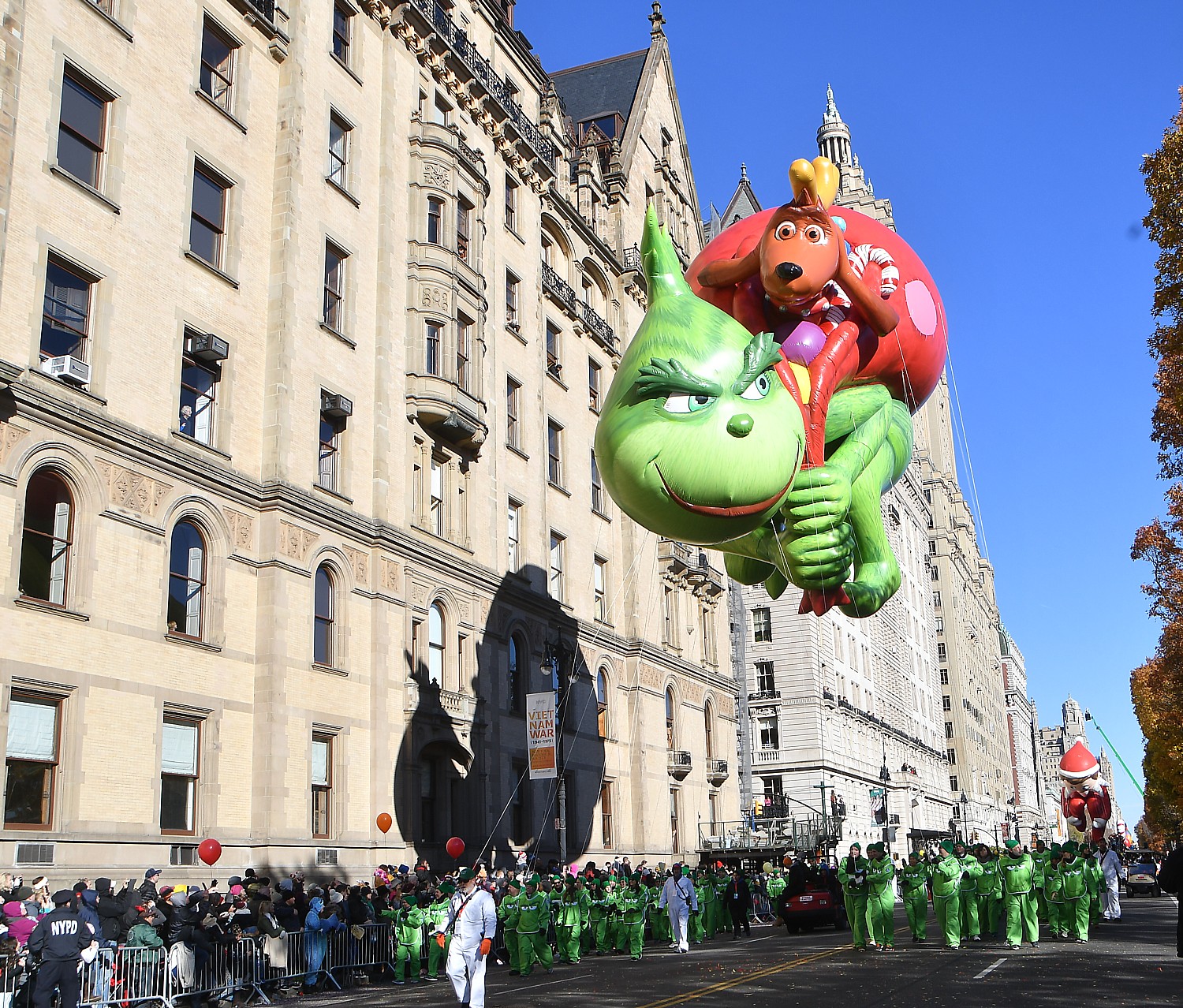 An estimated 3.5 million people were on hand for the 91st Annual Macy’s Thanksgiving Parade, amid perfect blue-skies day. Many had staked out their place along the parade route by 4 am, bundling up in the 30-degree temperature, which thankfully warmed up when the parade got going and the sun streamed across Central Park.

Macy’s CEO Jeff Gennette along with NBC TV’s Al Roker, surrounded by a few of the 1,000 clowns and 10,000 participants, to cut the ribbon.

New this year: a Singing Christmas Tree populated with 125 Macy’s employees, which Gennette said would become a new tradition for the parade.

Fan favorites include the population of giant character balloons, now expanded to 17 with the addition this year of four giant characters: Olaf from Disney’s “Frozen,” Illumination presents Dr. Seuss’ The Grinch, Jett from Super Wings™ and PAW Patrol, plus 28 legacy balloons, balloonicles, balloonheads and trycaloons.

The balloon line-up also featured the return of Harold the Baseball Player, a legacy Macy’s character prominently featured in Twentieth Century Fox’s iconic holiday film classic “Miracle on 34th Street.” In celebration of the film’s 70th anniversary, the Harold heritage balloon was for this year’s Parade, painted in hues of black, white and grey, to look exactly as it did on-screen during a memorable scene in the 1947 film. In addition to Harold, the famed spokesduck, the Aflac Duck, debuted as an all-new balloonicle (a Macy’s Parade innovation of hybrid cold-air balloon and vehicle).

The balloons became a feature of the Macy’s parade after just the first three years of the parade, which began in 1924 by some Macy’s employees, who brought live animals. But by 1927, the live animals were considered a nuisance and replaced (except for New York City mounted police, followed by a team of sanitation workers who receive as loud a cheer) by the giant balloons, one of the famous unique features of the parade.

Designed and created by the incredible artists of Macy’s Parade Studio, which include carpenters, painters, animators, sculptors, metal fabricators, scenic/costume designers and electricians, this year’s line-up of floats sets an unparalleled stage for entertainment. The painstaking process of creating a Macy’s Parade float is both a creative and technical endeavor. Macy’s Parade floats are often three-stories tall and several lanes of traffic wide, but must collapse to no more than 12½-feet tall and 8-feet wide in order to travel safely from the New Jersey home of the Parade Studio, to the Manhattan starting line via the Lincoln Tunnel each Thanksgiving eve. These creations are not only works of art, but also engineering marvels.

Specialty Parade entertainment always provides an exciting and sometimes humorous look at the nation’s finest performance groups. Returning to the line-up this year are the dancers and cheerleaders of Spirit of America Dance Stars and Spirit of America Cheer. These groups combined feature more than 1,000 of the nation’s very best performers recruited from small towns and big cities.

Adding to the dance floor revelry was 34th & Phunk, a special group commissioned and produced by Macy’s with organizers from the United States Tournament of Dance. Choreographed by the legendary artist Willdabeast Adams and acclaimed dancer Janelle Ginestra, 34th & Phunk will be a one-of-a-kind hip-hop dance crew featuring performers of all ages and from all walks of life, who have a passion for dance and precision movement. The talented kids of Camp Broadway this year auditioned and were selected dancers/singers from military bases around the nation and paid tribute to America with their performance.

Rounding out the performance group list are the zany Red Hot Mamas (Post Falls, Idaho) who delivered their signature humorous take on the holiday season, along with the whimsical stars of the Big Apple Circus (New York, NY).

Iconic symbols of thanksgiving – The giant turkey, Pilgrim Man and women lead the parade. Finally, the most stupendous float of all: Santa Claus with his elves and reindeer ushering in Christmas. A shout turns into a rolling cheer, children and parents scream and raise their arms as he passes.

The Macy’s Parade has become the launch for the winter holiday season not just for New Yorkers, but for the entire nation. The television broadcast is watched by some 50 million.