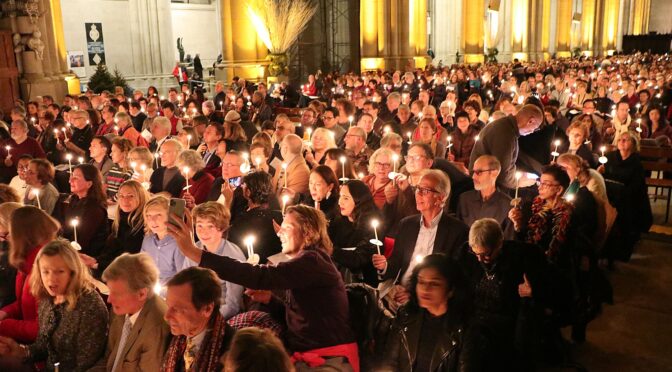 The Cathedral Church of Saint John the Divine welcomed in the New Year and a new decade as it has since 1984, with a concert devoted to Peace. The people who fill this enormous space, coming in many cases year after year, come for the solace the concert always brings, the re-commitment to a world of tolerance, acceptance, that comes together in peace and good will to resolve conflicts.

The Cathedral Choirs joined forces under the leadership of Kent Tritle, Director of Cathedral Music and one of America’s leading choral conductors. This signature event is one of many comprising the 2019–2020 season of Great Music in a Great Space.

When the first concert for peace was offered, in 1973 at its sister cathedral in Washington DC, America was at war, an election had been decided, but Leonard Bernstein inaugurated the New Year’s Eve Concert for Peace in 1984, years after the Vietnam War was concluded, because in the world, there has never been a time without conflict.

Even though technically, America is not at war, there is war raging in the land. “Americans are our own enemy, one against another,” Reverend Canon Patrick Malloy said. But every culture has the means to bring light out of darkness. “The world is varied and venerable ways, strikes fire, refuses to surrender to the dark.”

This year, the Cathedral Choir and Orchestra performed music ranging from Baroque works of Handel and Bach to contemporary works of artist-in-residence, organist David Briggs and Lee Hoiby’s poignant setting of ”Last Letter Home.” This work is based on a letter sent by Jesse Givens, Private First Class, U.S. Army, who drowned in the Euphrates River on May 1, 2003 in the service of his country. His letter to his wife Melissa was sent with the directions, “Please, only read if I don’t come home.”

The Cathedral Choir’s own Jamet Pittman again led the audience in “This Little Light of Mine” as the assembled in the sanctuary lit candles to welcome the new year with hope, joy, and affirmation.

The night also featured special guest appearances and performances by Judy Collins, who sang her iconic “Both Sides Now,” and “Amazing Grace” her voice ringing through this soaring space;  saxophonist and artist-in-residence Paul Winter performed Paul Halley’s “Winter’s Dream”;  artist-in-residence Jason Robert Brown, performed with his wife and daughters, “Sanctuary,” a song which Brown wrote especially for this concert; and host Harry Smith, the renowned journalist, who has hosted the Peace concert for some 30 years.

Reflecting on recent events, Smith said, “two-thirds of millennials don’t know what Auschwitz was; four out of 10 adults don’t know. So when things happen like what happened last weekend in a suburb of New York, we take pause.”

With that in mind, the Cathedral Choir offered an addition to its program, singing “Oseh Shalom”.

“The real news is terrible – also known as fake news. Mass shootings…Despair of an economy that works really well for a few. Wars without end, conflicts without resolution. It’s why so many of us show up here for New Year’s Eve…

“’We are the ones we have been waiting for. We are the change we seek,’ said Barack Obama,” Smith said to applause.

The atmosphere in the Cathedral Church of St. John the Divine (not to mention the acoustics) is spectacular. You think you have been plunked down in Europe in a building 1000 years old – this grand Gothic stone structure with soaring arches 177 feet high. The original design, in the Byzantine Revival and Romanesque Revival styles, was begun in 1892, but after the opening of the crossing in 1909, the overall plan was changed to a Gothic Revival design. Actually, the building was never finished – it is still only two-thirds complete. After a fire damaged part of the cathedral in 2001, it was renovated and rededicated in 2008. Even without being fully built, it is the fifth largest church in the world, based on area (121,000 sq. ft.)

The Cathedral Church of St. John the Divine is the Cathedral of the Episcopal Diocese of New York. It is chartered as a house of prayer for all people and a unifying center of intellectual light and leadership. People from many faiths and communities worship together in services held more than 30 times a week; the soup kitchen serves roughly 25,000 meals annually; social service outreach has an increasingly varied roster of programs; the distinguished Cathedral School prepares young students to be future leaders; Adults and Children in Trust, the renowned preschool, after-school and summer program, offers diverse educational and nurturing experiences; the outstanding Textile Conservation Lab preserves world treasures; concerts, exhibitions, performances and civic gatherings allow conversation, celebration, reflection and remembrance—such is the joyfully busy life of this beloved and venerated Cathedral.

The Cathedral is open daily from 7:30 a.m. to 6 p.m. Visit stjohndivine.org for more information and a schedule of public programs including concerts, among them the Cathedral Choir and Orchestra performing J.S. Bach’s monumental “St. John Passion,” on March 31, 2020 at 7:30 pm.