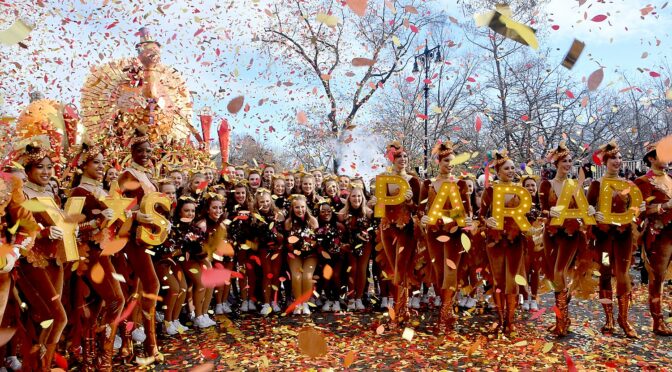 The 93rd edition of the iconic Macy’s Thanksgiving Parade  ushered in the holiday season with 16 giant character balloons; 40 novelty balloons, heritage balloons, balloonicles, balloonheads and trycaloons; 26 floats of fantasy; 1,200 cheerleaders and dancers; more than 1,000 clowns; and 11 of the nation’s finest marching bands, starting with the pilgrims riding a giant turkey and finishing with Santa Claus on his sleigh.

Despite strong winds and gusts on the cusp of forcing the giant balloons to be grounded, heroic balloon handlers acted more like wranglers to keep the balloons in control, though flying so low as to touch the ground. Still, there were thrills to be had, and not just the excitement at seeing favorite characters as tall or as long as a building flying overhead, as the balloons passed cross-streets where the winds were strongest, almost pushing the balloons over. The crowd cheered their encouragement, “Go, go, go.”

New giant balloon characters joining the line-up this year included Astronaut Snoopy by Peanuts Worldwide, Green Eggs and Ham by Netflix, and SpongeBob SquarePants & Gary by Nickelodeon. In celebration of his 75th birthday, a heritage balloon and fan favorite Smokey Bear once again takes to the skies over Manhattan.

Parade watchers also got a taste of the specialty performance groups. Joining the line-up this year were the teen dancers and cheerleaders of Spirit of America Dance Stars and Spirit of America Cheer – together featuring more than 1,200 of the very best performers recruited from hometowns nationwide. Also, the hilarious 610 Stompers (New Orleans, LA), modern dance youth talent showcased by The Alvin Ailey School (New York, NY).

Some 3.5 million people turn out to line the two-mile parade route; another 50 million watch on television.