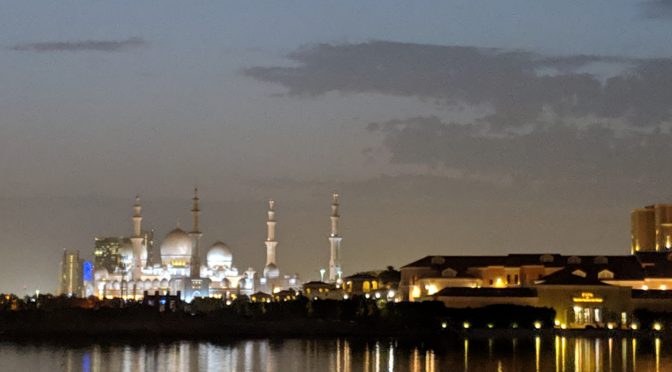 Abu Dhabi is one of those places where the impression you have is either completely wrong or nonexistent. At least for me. Coming here on the Global Scavenger Hunt was yet another instance of proving what travel is all about: seeing, learning, connecting for yourself.

Yes, it is about conspicuous ostentation. That part of the pre-conception seems validated.

But what I appreciate now is how an entire nation state was built out of a chunk of desert. The skyscrapers and structures that have grown up here in a matter of decades, not centuries.

My first awareness comes visiting Fort Hassan, the original defensive fort and government building, and later the sheik’s residence built around (it reminds me of the White House, which is both the home of the head of government and government office). Fort Hassan has been restored (not rebuilt) and only opened to the public in December 2018.

You see photos of how the fort/palace looked in 1904, with nothing but desert and a couple of palm trees around it. Today, it is ringed (yet not overwhelmed) by a plethora of skyscrapers, each seeming to rival the next for most creative, most gravity-defying, most odd and artful shape. It is like a gallery of skyscrapers (New York City Museum of Skyscrapers take note: there should be an exhibit) – both artful and engineering. I note though that as modern as these structures are, they basically pick up and mimic some of the pattern in the old fort. And the building just seems to be going on.

And then you consider: it’s all built on sand (and oil). “In 500 years from now, will these be here?” Bill Chalmers, the organizer of the Global Scavenger Hunt for the past 15 years. We had just come for Bagan, Myanmar, where the temples have been standing since the 11th century, despite earthquakes and world events.

There is also a Hall of Artisans which begins with an excellent video showing how the crafts reflected the materials that were at hand (eventually also obtained through trade) and then you see women demonstrating the various crafts, like weaving.

From there, I went to a souk at the World Trade Center that had stalls of some traditional items – wonderful spices for example – but in a modern (air-conditioned comfort!) setting, and directly across the street from a major modern mall promising some 270 different brand shops. Souks are aplenty here.

I found myself dashing to get to the 2 pm tour I had to pre-arrange at the Abu Dhabi Falcon Hospital which was at a surprising distance, a 35-minute drive.

This proves most fascinating to learn how these prized birds are handled. We are taken into a waiting room, surprised to see a couple of dozen hooded falcons, waiting patiently in what is a waiting room. Their owners have dropped them off for the day for whatever checkup or healthcare they require; others stay in the falcon hospital (the biggest in Abu Dhabi and one of the biggest in the world), for months during their moulting season, when they would otherwise live in the mountains for six months. They are provided the perfect cool temperatures they would have in that habitat, before coming to the desert in spring to hunt, and later to breed.

We get to watch a falcon being anesthesized – they quickly pull off his hood, at which point he digs his claws into the gloved hand holding him, and his face quickly stuffed into the mask and put to sleep. His claws, which normally would be shaved down in the wild, become dangerously overgrown in captivity; the falcon doctor also shows how they can replace a feather that has become damaged, possibly impeding the bird’s ability to fly or hunt (they can carry prey four times their weight), which have to be the exact same feather, which they match from the collection of feathers from previous moultings. Then we get to hold a falcon. Not surprisingly this is one of the scavenges on the Global Scavenger Hunt (worth 35 points in the contest to be named “World’s Greatest Traveler”).

It is a thrilling and unique experience. I meet a woman from Switzerland who is engaged in a four-week internship at the falcon hospital, learning how to handle and care for the falcons – information she will bring back as a high school teacher. She tells me they are very kind and gentle, and bond with their owner. The feeling is clearly reciprocal – the falcons can fly with their owner in first class, have their own seat and their own menu (fresh killed meat).

Next I go to the Grand Mosque – an experience that is not to be believed. If you thought the Taj Mahal was magnificent, a wonder of the world, the Grand Mosque which was built in 1999 and uses some of the same architectural and decorative design concepts vastly surpasses it, in architectural scale and in artistic detail, not to mention the Taj Mahal is basically a mausoleum, while the Grand Mosque is a religious center that can accommodate 7800 worshippers in its main sanctuary, 31,000 in the courtyard (one of the largest mosaics in the world), 51,000 worshippers altogether for such high holy events as Ramadan over 55,000 sq. meters – the largest mosque in the United Arab Emirates and one of the largest in the world.

The experience of visiting is also surprisingly pleasant, comfortable, welcoming – not austere as I expected (after having visited Buddhist temples in Myanmar). Women must be fully covered, including hair, but they provide a robe (free); the public tour (an absolute must) is also free, indeed, the admission ticket to the Grand Mosque is free. When you arrive at the Visitors Center, which is at some distance from the mosque, you go underground to where there is an air-conditioned mall, with restaurants and shops, then go through a tunnel like an airport (it kind of reminded me of how Disney moves its visitors into its attractions).

I timed the visit to arrive about 4:30 pm – and go first to what is labeled as the Visitors Happiness Desk – how could I resist? The two gentlemen who manned the desk (surprisingly who were natives of Abu Dhabi when 88 percent of the population here come from some place else) were extremely well suited to their role – extremely friendly, helpful. As I am asking my questions, who should arrive but my Global Scavenger Hunt teammate (small world!), so we visit together, and fortunately, she managed to get us on the public tour which had already left.

We left just at dusk, with the lights beginning to come on, and a touch of sunlight breaking through clouds that made the structures even more beautiful if that were possible.

I asked the Happiness guys where to go for the best view of the mosque after dark, and they directed us to The Souk at Qaryat (Al Beri), just across the water from the mosque. Sure enough, the view was spectacular.

We arrived in Abu Dhabi about midnight local time after having left our hotel in Myanmar at 5:15 am, flew an hour to Bangkok where we had an eight-hour layover challenge (I only managed to do a water taxi on the canal and explore the Golden Mountain and some buildings and watched preparations for the King’s coronation (I later heard it was for a parade that day). Then flew six hours to Abu Dhabi where we gained 3 hours (that is how we make up the day we lost crossing the International Dateline and why it is so hard to keep track of what a day is), so for us, it felt like 3 am. Bill Chalmers, the organizer, ringmaster and Chief Experience Officer of the Global Scavenger Hunt said that this was the most arduous travel day we would have (and the 18 hours travel from Vancouver to Vietnam was the longest airline time).

Tonight’s scavenger hunt deadline is 10 pm, when we will learn where our next destination will be on the 23-day day mystery tour. Only five of the original nine teams are still in contention to win the designation “World’s Best Traveler” (and free trip to defend the title next year).

Another was to “hold an informal majlis with actual locals (people actually from UAE and not at any hotel) over an Arabica coffee; talk about a few things like the future of Abu Dhabi, oil, tourism, arranged marriages, Western values, etc.” That would earn 35 points.

Other possibilities: ride “the world’s fastest rollercoaster” (75 points – Paula and Tom did that, she said it was like 4G force); visit the Emirates Palace, walk it from end to end and have a “golden cappuccino” (they literally put gold flakes in the cappuccino, this is Abu Dhabi after all) for 35 points; take in the grandeur of the Prsidential Palace, only recently opened to the public, and visit Qasr Al Watan (50 points).

Many of the scavenges (including mandatory ones), have to do with local food, because foods and food preparations are so connected to heritage, culture, and environment. One of the scavenges here was to assemble three flavors of camel milk from a grocery store and do a blind taste test (35 points).

A lasting impression that I will carry away from this brief visit to Abu Dhabi: the theme this year is “Year of Tolerance.“

We gather together at 10 pm in the lavish lobby of the St. Regis, excitedly trade stories about our travel adventures during the day. Inevitably, I am jealous of the things I didn’t do, couldn’t fit in to do – like visiting the Fish Market, the Iranian Souk, the Presidential Palace, built for the tidy sum of $5 billion (open til 7 pm, then a lightshow at 7:30 pm).

And then we learn where we are going next: Jordan!