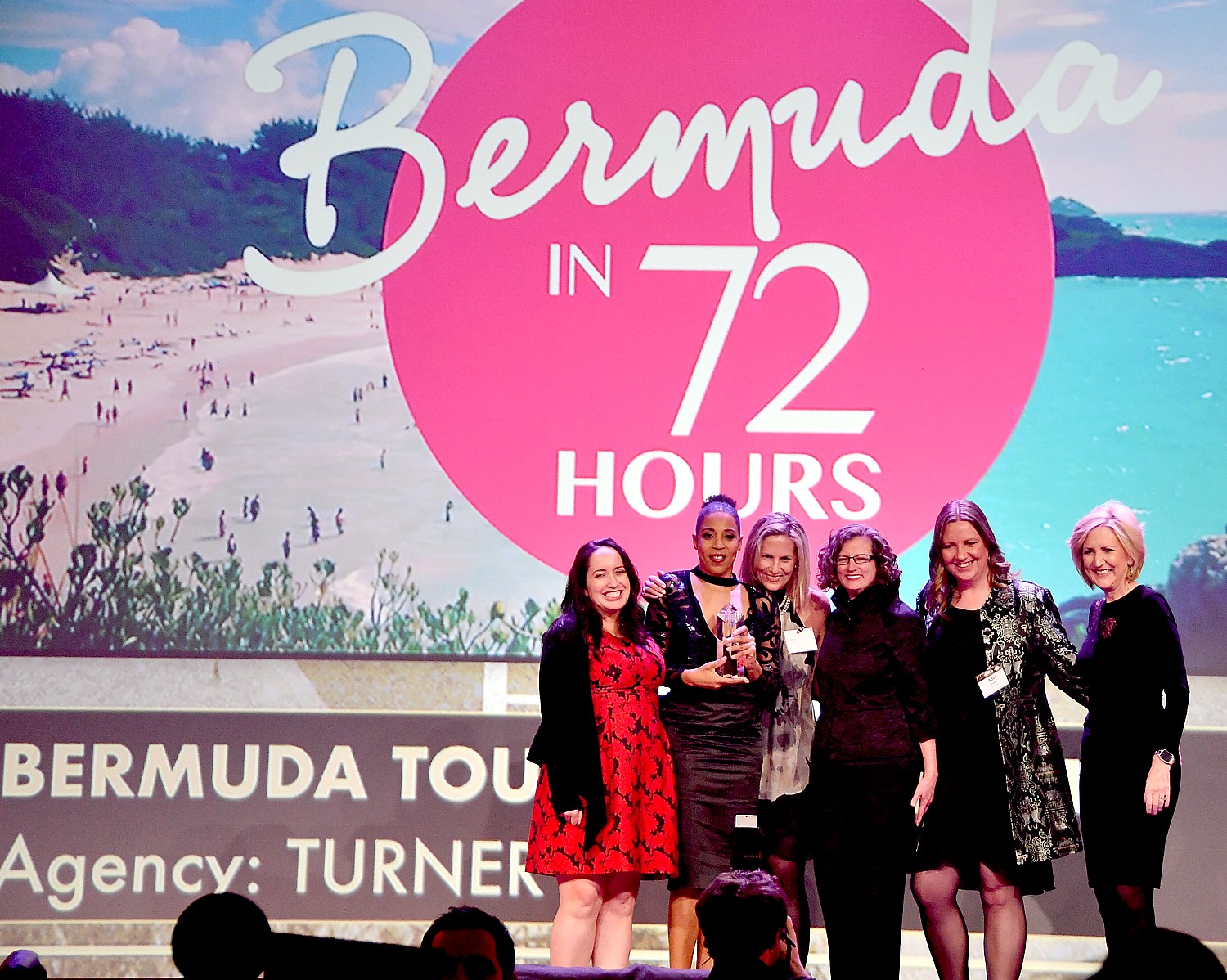 They are the CLIO awards of the hospitality and travel industry – a gigantic segment of the US economy and culture which people don’t readily recognize as being so integral to everyday life. But these are the campaigns that excite, engage, inform and ultimately spur millions of us to venture out and experience new places and people. At the same time, travelers bolster local, state and national economies, create an economic underpinning that sustains heritage, culture and the environment.

“It’s always wonderful to be able to celebrate the innovators of our industry. Their outstanding work challenges and inspires the rest of the profession,” said Robert A. Gilbert, CHME, CHBA, president and CEO of HSMAI. He added, “Tonight was a special milestone—the Adrians have now been recognizing excellence in the hospitality industry for six decades.”

Dating back to 1956, the Adrian Awards applaud marketing achievements in hospitality across multiple segments of the industry. Award winners are selected by senior industry and media experts from more than 1,200 entries, for three main entry divisions: advertising, digital marketing and public relations. Gold Award winners across these three categories were recognized during the Adrian Awards Dinner Reception, which was co-sponsored by HSMAI and Google. Platinum winners were selected from the standout Gold Award winners. Winners were selected from 1000 entrees.

The stakes are huge: these advertising, marketing and public relations campaigns are a key part of the travel and tourism industry that generates $2.1 trillion in economic output (2.7% of the nation’s GDP) from domestic and international visitors (includes $927.9 billion in direct travel expenditures that spurred an additional $1.2 trillion in other industries through a ripple effect). Travel expenditures support 15 million jobs (8 million directly); account for $221.7 billion in wages, and generate $141.5 billion in tax revenues to federal, state and local governments, levels that increased significantly over the past eight years, helping to lift the nation out of the Great Recession.

For example, Bermuda, which won “Best of Show” in Public Relations, undertook its campaign to reverse a decline in tourism that is such a large part of the country’s economy.

Best of Show Awards, the highest honor of the evening, were bestowed upon a Platinum Award winner from each of the three divisions—advertising, digital marketing, and public relations:

Digital Marketing “Best of Show” – From Brake Lights to Rested Nights – Red Roof Inn and its agency, 360i

The following are Platinum Award winners in the advertising, digital marketing, and public relations divisions:

Gold Award winners’ submissions were shown on digital displays at the Adrian Awards Dinner Reception and featured during the Gala stage presentations. “The honorees in this year’s competition displayed innovation, creativity, and demonstrated measurable results and return on investment that were noted by this year’s judges as being exceptional,” said Fran Brasseux, HSMAI Executive Vice President.

“It is an honor to be a member of this illustrious group of industry leaders,” said Brandman, at the awards ceremony. “I would like to dedicate this award to my father and my mother, for raising me and my siblings to be global citizens, and instilling in us an unstoppable desire to experience the world and share whatever wisdom we pick up along the way.”

“It is truly an honor to accept this award,” stated Koehl Award recipient Randy Smith, who was unable to accept the award in person. “I have been incredibly fortunate throughout my career in the hospitality industry in working with smart and talented people.”

The winner of the seventh annual Leader in Sustainable Tourism Award, presented by HSMAI and National Geographic Traveler, was Amelia Island Convention & Visitors Bureau for “Clean Beaches and Sea Turtles.”

“Presented in conjunction with National Geographic Traveler, the Leader in Sustainable Tourism award recognizes a person, company, or community for demonstrable leadership and innovation in preserving and communicating an authentic sense of place through a wisely managed tourism program. Nominees are judged by how their efforts preserved the environmental, cultural, and historic integrity of a destination, and how the program demonstrated leadership, innovation and accomplished its goals.”

The Pioneer in Visual Storytelling Award, presented by HSMAI and Libris by PhotoShelter, a new award presented for the first time at these Adrian Awards, went to Newfoundland and Labrador Tourism and their agency, Target.

“The Pioneer in Visual Storytelling Award celebrates a brand in the travel and tourism industry that has shown consistent commitment to using visual assets creatively in marketing and communication to tell its story. Nominees are evaluated based on high-quality production value of images and/or video, compelling storytelling across platforms, use of forward-thinking formats, innovative distribution and demonstrated impact on their audiences. Successful entries use visual assets to inspire an emotional response, motivate audiences to take action and help the brand meet strategic objectives.”

The HSMAI Lifetime Achievement Awards recognize individuals who have spent a major portion of their careers in the hospitality and travel profession and have contributed to the betterment of the industry in a significant and lasting way, over an extended period of time.

Melanie Brandman, honored with the Winthrop W. Grice Award for Public Relations, is the founder & CEO of The Brandman Agency. With offices in New York, Los Angeles, London and Sydney, Brandman is recognized as one of the most credible travel and communications experts in the business. She has ensured that The Brandman Agency has remained at the forefront of the industry by being an early adopter in the ever-evolving digital and influencer space. Prior to establishing The Brandman Agency, she served as Vice President, Corporate Affairs for InterContinental Hotels Group based in London. Brandman’s other successful ventures include Travel Curator, an online travel website, content development, and distribution platform targeted to an affluent, forward-thinking audience of global travelers. The site was voted one of the 10 Best Luxury Travel Blogs by readers of USA TODAY and 10Best. This past year, Brandman was named ‘Most Compelling Woman in Travel’ by Premier Traveler magazine.

Randy Smith, the recipient of the Albert E. Koehl Award, co-founded STR in 1985. STR provides clients from multiple market sectors with premium, global data benchmarking, analytics and marketplace insights. With just over 300 employees, STR maintains a presence in 16 countries around the world with a corporate North American headquarters in Hendersonville, Tennessee, and an international headquarters in London, England. Prior to starting STR, Smith was Director of Research for Laventhol & Horwath. He has been recognized by Business Travel News, Lodging Hospitality magazine, ALIS, Industry Real Estate Financing Advisory Council, Florida State University College, and the International Society of Hospitality Consultants.

The Albert E. Koehl Award for Lifetime Achievement in Hospitality Marketing recognizes individuals who have spent a major portion of their careers in the hospitality and travel profession and have contributed to the betterment of the industry in a significant and lasting way, over an extended period of time. The award is named in honor of Albert E. Koehl, a pioneer in hotel advertising. Past Koehl award recipients including: David Kong, Roger Dow, Eric A. Danziger, Sol Kerzner, Ian Schrager, Barbara Talbott, Barry S. Sternlicht, Vincent Vanderpool-Wallace, Horst H. Schulze, John J. Russell, CHME, Michael A. Leven, CHME, Richard Branson, Christopher J. Nassetta, and George Aguel.

“HSMAI is proud to honor Melanie and Randy for their impressive careers marked by innovative contributions to the global hospitability industry,” said Robert A. Gilbert, CHME, CHBA, president and CEO of HSMAI.

Selected by a panel of senior industry executives, The HSMAI Top 25: Extraordinary Minds in Hospitality Sales, Marketing, Revenue Optimization for 2016 were honored by HSMAI in a reception co-hosted by Questex Hospitality + Travel and also recognized on stage during the Gala.

The HSMAI Top 25 Extraordinary Minds for 2016 are:

“HSMAI is proud to recognize an outstanding group whose impressive achievements define success and inspire their peers in the hospitality industry,” said Robert A. Gilbert, CHME, CHBA, president & CEO of HSMAI. “Their deep knowledge, nimble response to changing markets, and innovative solutions have driven their success and strengthened our industry.”

The Hospitality Sales and Marketing Association International (HSMAI) is committed to growing business for hotels and their partners, and is the industry’s leading advocate for intelligent, sustainable hotel revenue growth. The association provides hotel professionals and their partners with tools, insights, and expertise to fuel sales, inspire marketing, and optimize revenue through programs such as HSMAI ROCET, Adrian Awards, and Revenue Optimization Conference. HSMAI is an individual membership organization comprising more than 7,000 members worldwide, with 40 chapters in the Americas Region. Connect with HSMAI at www.hsmai.org, www.facebook.com/hsmai, www.twitter.com/hsmai and www.youtube.com/hsmai1.