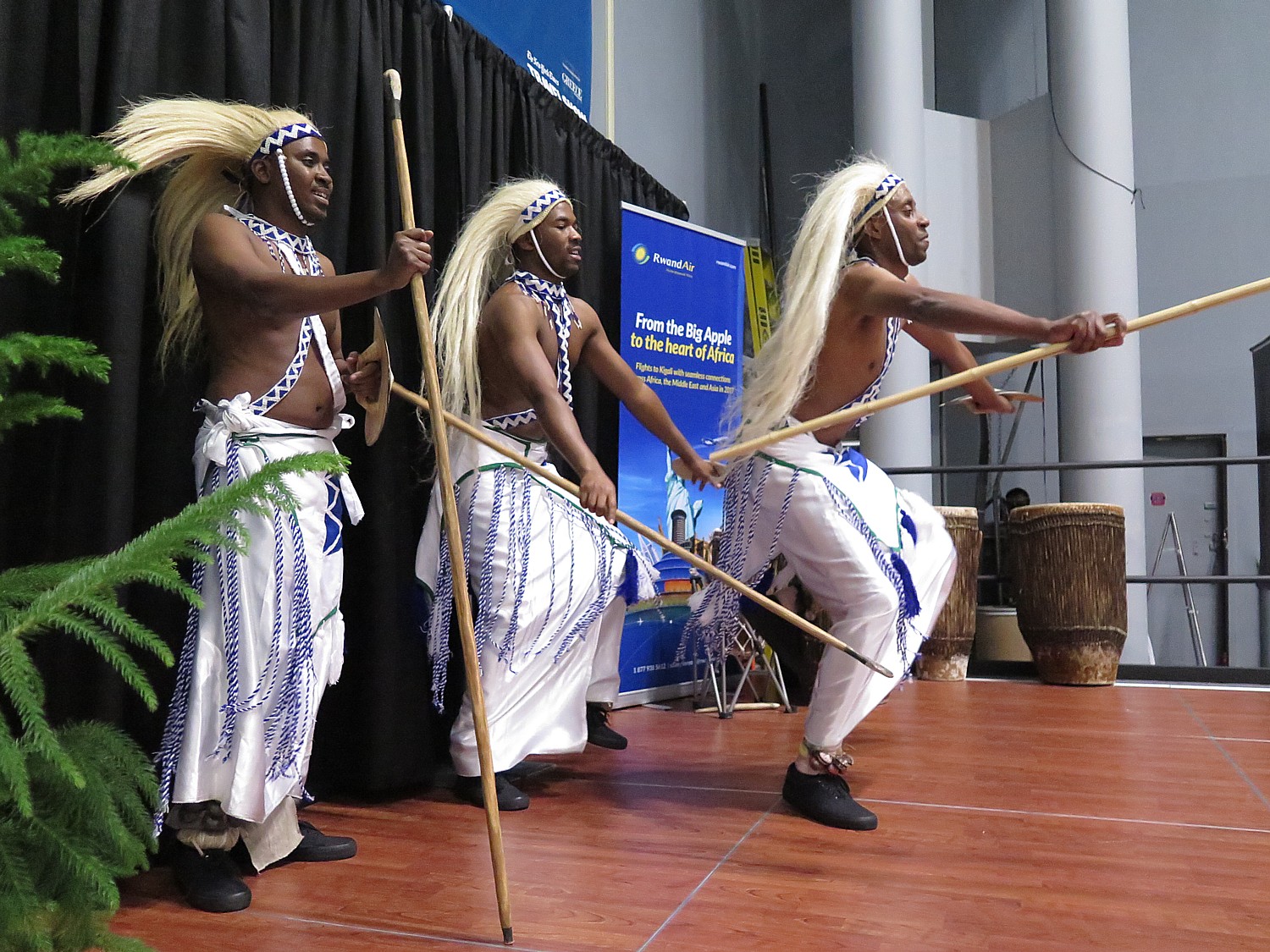 According to travel expert Peter Greenberg, that dreaded four-letter word “fear” could actually work out to the benefit of Americans who want to explore the globe..

That, in combination with a strong dollar against just about every other currency, means that Americans have a buyers market in a “brave new world of travel” characterized by “disruption.”

Americans who travel abroad, though, tend to be open minded, able to adapt to different situations, and open to adventure and the unknown.

As it turns out, only 37% of Americans have passports (and, Greenberg notes, only 42% of members of Congress and Senate – a revealing aspect at why some have such an insular, provincial view, or who hold so ardently to the myth of American Exceptionalism. It’s easy to imagine America to be exceptional when you don’t actually see anything else first hand.)

“How can you make global policy if you have never left Kansas?,” Greenberg, a best selling author and TV travel commentator, asks the standing-room crowd  attending his seminar, “The Brave New World of Travel,” at the 2017 New York Times Travel Show  at the Javits Center in New York.

The Travel Show took place just as Trump’s Muslim/Travel ban was causing havoc and bringing out thousands of protesters at international airports across the country, an anathema to the people attending the show who clearly valued international travel as a bridge between peoples, cultures and politics.

The “disruption” that is at the heart of the “Brave New World of Travel,” is that there are more international airlines, creating more competition, more services, and keeping fares from rising, more competition among hotels and cruiselines. Even the uncertainty (insecurity) around global affairs creates a buyers’ market for intrepid travelers who see more reward than risk.

Since 2006, he says, there have been 75 new routes from such carriers as Turkish Airlines. Condor Airlines used to be a charter carrier, now is a scheduled carrier. Norwegian Airlines has really rocked the market with low fares.

It’s a buyers market in the hotel industry also, though it is harder to see why, with mergers and acquisitions like Marriott & Starwood giving a single entity even more control of the marketplace. It could be because after making their deals to sell inventory through online travel agencies (OTAs) like Expedia, now the hotel companies are trying to incentivize customers to book direct. “Why click around? They will give free WiFi and a donut.”

How can you benefit? Greenberg says don’t book the newest ships (they aren’t discounting their fares); rather, “book the 2-3-4 year old ships that are just as good but have excess capacity.” Norwegian for example has fares as low as $65/night. “You can’t wake up in Brooklyn for that.”

“Now you know you can go, the question is how do you go.” When he asks people to raise their hands if they make their reservations online and most people in the room do, he comes back, “You’re all losers,” with a smile.

“I know why you book online –because you can do it at 3 am and you don’t have to talk to anyone. You’re very happy to hit a key and book. But now you have disenfranchised yourself with 40% of inventory.”

He derides the “lost art of conversation,” and says, “it’s okay to research online, but don’t book online.”

He notes (what Pauline Frommer had observed in an earlier seminar also), that when you search for an airline fare, and happen to wait and return an hour later, you will find the fare has increased, perhaps $100 more.

That’s because the computer remembers you, appreciates a supply/demand market and can pitch you a higher fare. “Clean up your cookies or use somebody else’s computer.”

“When you have a conversation with an airline rep or a cruise rep, you may think it is about getting the best rate – losers! –It’s not about the rate, it’s about the value. The internet does nothing creativity, thinks literally, it can’t answer the questions you should ask.

“You might get a good rate online, but when you have a conversation directly with a hotel, you can ask for the hotel to throw in free WiFi, get rid of dreaded resort free, get the kids to stay free, eat free.

With a cruiseline, “it’s not about the cost of cabin, it’s about onboard credits, which excursion should or should not take.” [In this respect, you are much better off booking through a travel agent, who can usually get free upgrades, free drinks, perhaps even a shore excursion thrown in.]

Where do You Want to Go?

“Where do you want to go?” he asks. “This is where you get into trouble – how many have bucket list? He asks, and a few people raise their hands. “Loser,” is his retort.

He says he wouldn’t say no to going to North Korea (I know who is in control), Iran [which is actually become a hot destination for Americans, up until Trump’s election and the travel ban]. I would even go to Northern Iraq, because it is under control of Kurds, every airline goes there and is safe.” [Which might have been true before the Trump travel ban which Iraq retaliated against in kind.]’

“‘Fear’ is a four-letter word. Don’t be motivated, don’t be driven. How many read US State Department travel advisories – you should read them but when people hear there is an advisory, they don’t go.”

The State Department’s travel advisory for Turkey advises travelers that Turkish  drivers pass on the left and on the right. “Have they been on Southern State Parkway?” he jokes. “I was in Turkey 48 hours after the New Year’s Eve nightclub shooting. I did not feel threatened or afraid.

“The best time to go anywhere is after natural disaster, civil disturbance, terrorism.”

[Indeed, six countries have travel advisories against the United States because of the epidemic of gun violence.”

“Tourism creates jobs – these destinations that have been hurt by natural or manmade disasters are desperate to have you there. And who wants to stand on line? Go to a place that is happy to have you, a great deal, an amazing experience. And it sends a statement that we will not be beaten by that.

He notes that 707 Americans have been killed in acts of civil unrest of the past 28 years. “Put that in perspective: every week in this country 800 citizens are killed or injured in accidents in their bathtubs. People worry about shark attacks –after 1 person is attacked. More are killed in auto accidents abroad; the second greatest cause of death is by selfies – people fall off cliffs, are hit by trains – 100 people are killed by selfies. Put the numbers in perspective.”

“All these passport holders, you love to travel. Now you’ve got to use them – you are in the drivers seat – the most beneficial position.

“It’s not seasonal – there will be deals all year long because economies are taking longer to recover – Italy, France, Turkey – you can go anywhere – Brazil, Argentina. Then, there are the deals airlines are doing with stopovers, hotels, tours.

“Now think of what’s on your bucket list, burn it and figure a place where you can have great experience.”

Beating the Airlines at Their Own Frequent Flyer Game

Airlines have radically changed their Frequent Flyer programs. “If you didn’t pay a lot [for a fare] you don’t get much [in points]. It’s not just hard to earn miles but hard to redeem them.”

In fact, Greenberg notes that there are some 23 trillion unredeemed miles outstanding.

“Airlines, he notes, are free to constantly change rules for using frequent flyer miles to their advantage because there is no regulation by attorney general. They are protected by deregulation and can change the rules any time, which means every day, they have outstanding miles as a liability but they don’t want to displace revenue passengers.

“There is no such thing as a free ticket anymore; every plane is full.”

But miles are great to use to “figure a place you’ve never been, never wanted to go, and go there. Pick 330 days out and go.”

Still, you may just want to go to Hawaii and Paris and use your unredeemed miles to get there.

Greenberg proposes a rather adventurous way to beat the restrictions that make it almost impossible to use frequent flyer points,

“Let’s say you want to go to Hawaii a week from today and have enough miles based on eligibility– The carrier indicates you can’t have the fare at 12,000 points, but you can at 50,000 (extortion).

“You call up the airline to redeem miles. ‘When in my lifetime will  there be a seat?’ The airline tells you after Thanksgiving. ‘I’ll take it.’

“Then pick an arbitrary day. But now you have a ticket that has the flight and the cities just not the date you want. So you hang up and call the regular reservations number. You  tell them you want to purchase six seats on that flight. You just want to know there are 6 seats on the flight.

So you send your bags ahead by Fed Ex, he says.

“You know there are seats – every day you call, you  pick the first flight of the day – go down on the day want to fly, NY-Hawaii – 5 am with ticket – fly standby, no bags. If there is a seat on the plane, they will let you on. Or if that is full, the next or the next (there are many flights during the day).

“If you ask if you can fly standby with a Frequent Flyer ticket,  they will say no, but the counter agent will say yes.”

[I find myself thinking this is all well and good and wonderfully adventurous, but how would this work for the return flight?]

“The rule is – don’t hoard miles. There is no upside.” On the other hand, you are a full if you redeem your miles for a magazine subscription.

“Don’t succumb to those offers. Instead, think 333 days out and beat the airlines at their own game playing by their rules.”

With the US dollar so strong, it isn’t just that the dollar has more purchasing power abroad, but that travel to the US becomes more expensive for people to come here. That means that it will be harder for airlines to fill their seats coming here.

(Of course, this, combined with the travel ban means that US inbound travel, a key export that contributes to a favorable trade balance and supports millions of US jobs and economic activity, will also be depressed, perhaps for Americans to fill the vacuum with domestic travel.)

“In a world of disruption, you get to disrupt. You have the knowledge. You can always go to Paris or Hawaii, but the world is open and [destinations] are ready.”

Pauline Frommer at NYT Travel Show: How to Get Best Value for Your Travel Dollar in 2017