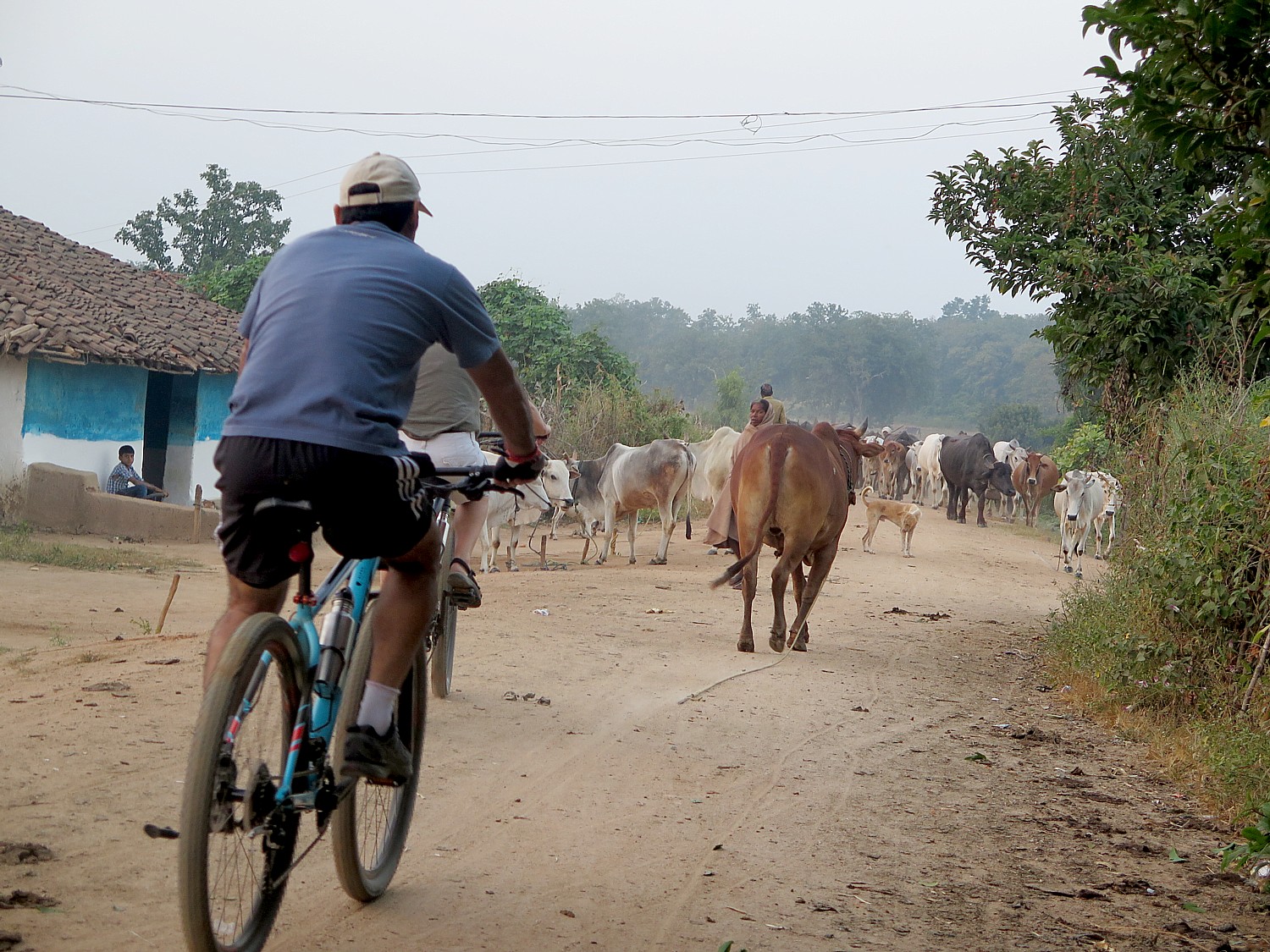 Our 25 km cycling trip through the Forest Corridor sanctuary between Pench and Kanha national parks in central India – literally the locale for Rudyard Kipling’s 1895 classic “Jungle Book” –  is the most challenging ride of the aptly named new “Jungle Book Wildlife Safari & Cycling Adventure” offered by Royal Expeditions (see story). But the most colorful, scenic and interesting ride comes during our stay at the Kanha Earth Lodge (another fantastic ecolodge), alongside the national park, when we ride through villages and alongside farms.

After an exciting game drive in the Kanha National Park in the morning (still no sighting of the tiger, though) and lunch at the lodge, we set out on a 14.9 km route that circles back to the lodge. It is a mix of road and single-track off-road (though the cars don’t drive on anything better), and involves some technical riding (sand, gravel, rocks).

What is so special about cycling is that it brings you into local communities, at a pace and perspective, perched on the bike saddle, to really see things, to be in the scene, not just a spectator looking through glass, and with the ability to stop, look around, and interact.

Not too far from the Kanha Earth Lodge we come into a village, where our guide invites us into a home to see what it looks like on the inside. A father and son are there, looking a little mystified at this sudden intrusion. There are cows and goats in pens in a front courtyard (in this community, the animals are kept in front of the house and not usually in pens, as a sign of wealth and status, Vishal Singh, the managing director of Royal Expeditions who accompanies our small group, tells us). It is dark and spartan inside – there is electricity and a small, old television set. Most homes do not have indoor plumbing. There is a beautiful garden in the back.

We ride a little further and hear drumming so we ask to go inside and come upon a band of shepherds rehearsing with dancing and singing, getting ready for a competition that is part of the Diwali harvest festival underway.

As we set out to continue on our ride, we find ourselves going against a massive herd of cattle (with horns, no less) that fills the narrow street, with no choice but to bike straight through. The cows, it turns out are used to people, and as we come mere inches in front, turn slightly to make way for us. There is a shepherd at the back of the herd, but we are told that the cows find their way to their own homes for the night.

People cycle all over India, but not in the manner or style that we are riding, so we are curiosities. In fact, it is astonishing to see the loads that people carry with a basic bike, though scooters and motorcycles are extremely popular (and we’ve saw as many as four people on a motorbike). When you see people biking with a load of sugar cane or batches of wood or pipe on a regular bike – not the mountain bikes or hybrids with 24 gears that we have – it is awe-inspiring.

We become immersed in these scenes of everyday life and fields and farms: women are carrying massive loads on their heads, walking with the grace of a model in an etiquette school; men driving carts pulled by cows; school girls in their neat uniforms riding bicycles home (the government gives girls a bicycle when they matriculate to high school); a fisherman who has just returned with his catch.

Then toward the end of the ride, on a berm overlooking gorgeous rice fields on one side and a small lake with water buffalo on the other, trees along the border completing the picturesque setting as the sun begins to set, the Kanha Earth Lodge fellows set up a snack using the front of the jeep as a table – offer soda, coffee, tea, water, a kind of fried onion (tasty!).

We snack leisurely while watching people cutting down the rice stalks with scythes; others take huge clumps in yokes on their shoulders to great mounds growing ever higher with each new contribution, to dry before being threshed. Soon, a woman comes along who we had met in the village earlier, engages in conversation and takes photos with us.

The sun is a blazing red-orange when we set out on the last leg on a sandy road. I get one shot just before it disappears into a line of clouds. As dusk sets in, the temperature becomes much cooler as we make it back to the hotel just before dark – greeted with a wash towel and refreshing lime juice.

Photo tip: For biking, I use a Canon G16, a small point-and-shoot I can keep around my neck and pull out with one hand. It is remarkably fast and responsive, has a terrific zoom lens that is wide enough for landscapes, long enough for close-ups, has an enormous ISO range plus built-in flash if necessary, sensitive sensor that gives rich color, and has image stabilization. It also takes video. I’ve taken shots in horribly low light using the Automatic setting.

The Royal Expeditions trip is designed to really immerse us in the cultural experience.

On our third day, we have a morning game drive at Pench, then lunch at the Pench Tree Lodge, then drive a couple of hours to Kanha National Park, which will be our venue for the next three days for game drives and cycling. The drive gives us a superb view of local life – Vishal notes that in India, “Daily life is lived in public” as we see a fellow brushing his teeth in the street. Vishal times the trip so we arrive in time for a weekly village market underway, just at the base of the forest road to the Kanha Earth Lodge.

Madhya Pradesh is dominated by tribal groups, remarkably untouched by development in other parts of India.  The differences in the tribal community, spread over various parts of the state, are based on heredity, lifestyle and cultural traditions as well as social, economic structure, religious beliefs, language and speech.

This is most apparent in the market. It is a swirl of color, sound and activity.

Merchants spread out food produce and wares on cloth on the ground – have their scales to weigh. They hawk their wares. People crowd around to buy. Cash money is exchanged. It is a kaleidoscope of color: the women in vibrant saris, the fresh produce.

Cows roam freely in the market- one snatches a potato from a pile and the merchant yells and reaches over to swat it with a switch to get it to move on.

We are here at around 4 pm and the warm light makes for gorgeous photos. Indeed, Royal Expeditions offers a photography tour that goes from village to village for their markets.

There are the photos I’ve seen in my mind –that I have wanted to take my whole life. The colors and contours of the bright saris against the brown fields, or the colors of the mud homes, newly painted in broad horizontal stripes – white and blue or pink or green – for the Diwali Festival, the Festival of Lights celebrating the last harvest before winter, against the field of bright yellow mustard (canola) flowers.

In these settings – even shooting from a moving vehicle and especially for wildlife – I use my new Nikon D500 DSLR with a 28-300 mm lens with image stabilization, which I find wide enough for landscape scenes, but close enough. The camera’s best virtue is how fast it responds, its enormous  ISO range (I even shoot village scenes at night as we drive back to the lodge). In general, its 20.9 megapixel CMOS sensor produces rich tones though I am still trying to figure out how to get the best exposure readings. It takes cinematic 4K UHD video and is WiFi capable. It is relatively light compared to other professional-grade cameras and fits ergonomically in my hand, which is a comfort when you are shooting for hours at a time.

It’s hard to overstate how unusual this trip is – the whole idea of being able to bike where wild animals can also roam, when people are not allowed to step out of their safari vehicles, normally. The trip is result of a creative insight as well as the tour company’s connections with the preserve officials to get the permits to bike into the sanctuary.

Indeed Royal Expeditions has royal connections: the tour company, which specializes in luxury, customized and special interest trips, was founded in 1993 by the Princess of Jodhpur, who served in Parliament and as the nation’s Minister of Culture (see http://royalexpeditions.com/)

Notably, our trip, which covered about 25 km of the Forest Corridor, was immediately followed by a fascinating 160 km fundraising ride, produced by Tour Operators For Tigers (TOFT) along this same forest corridor that we traveled, linking Pench with Kanha national parks, where wild animals freely roam. Singh is a founder of the group which has about 150 members now. This year, about 20 people took part in the 4-day/3-night ride which raises money to hire local people as village guardians, providing them with smart phones so they can alert authorities to illegal poaching. But I see the ride as a major lure for cyclists from around the world because of its unique setting and challenge (the “road” is more of a mountain bike trail, especially so soon after the rainy season), as well as the opportunities to stay in guesthouses in these villages, not to mention the mission. “Authentic” doesn’t even begin to describe the experience.

Like the Pench Tree Lodge which we enjoyed during our time at the Pench National Park, the Kanha Earth Lodge (www.kanhaearthlodge.com) enhances the wilderness experience. It is an ecolodge made of all natural materials that is stunning in its design that blends so perfectly without adverse impact on the environment, uses local and traditional art (there is even a fellow who paints tigers), has its own organic garden and a lovely swimming pool, a stunning lodge (WiFi available in the office), and each evening, during cocktail hour, the in-house naturalist offers fascinating presentations about the wildlife and the national park,.

Next: Tiger Tiger! On Safari in Kanha National Park