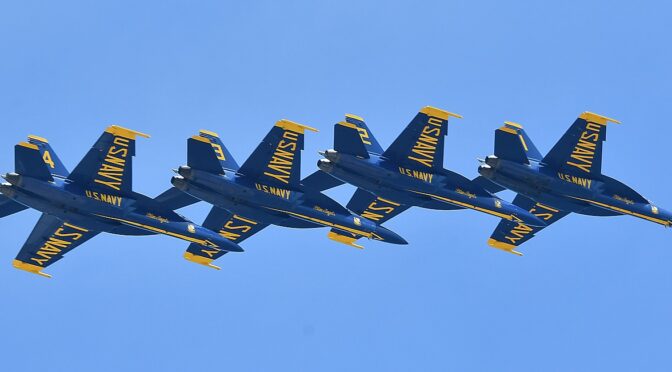 The US Navy Blue Angels were the headliners at the 2022 Bethpage Air Show at Jones Beach State Park, Long Island, over Memorial Day weekend, performing their heart-stopping maneuvers in their F/A-18 Super Hornets.

The Blue Angels were formed in 1946 by Chief of Naval Operations, Admiral Chester Nimitz, who had a vision to create a flight exhibition team to raise the public’s interest in naval aviation and boost Navy morale (and likely Congressional funding). In the 1940’s, the demonstration team thrilled audiences with precision combat maneuvers in the F6 Hellcat, the F8 Bearcat and the F9 Panther. During the 1950’s, they flew their aerobatic maneuvers in the F9 Cougar and F-11 Tiger and introduced the first six-plane delta formation, still flown to this day. By the end of the 1960’s, the team was flying the F-4 Phantom, the only two seat aircraft flown by the delta formation. In 1974, the Blue Angels transitioned to the A-4 Skyhawk, a smaller and lighter aircraft with a tighter turning radius allowing for a more dynamic flight demonstration. In 1986, the Blue Angels celebrated its 40th Anniversary by unveiling the Boeing F/A-18 Hornet. In 2021, the team began flying its current aircraft, the Boeing F/A-18 Super Hornet and celebrated its 75th anniversary.

A total of 17 officers voluntarily serve with the Blue Angels at one time, according to the Blue Angels’ website www.blueangels.navy.mil/. Each year the team typically selects three tactical (fighter or fighter/attack) jet pilots, two support officers and one Marine Corps C-130 pilot to relieve departing members. They typically serve two years with the team and then return to the fleet after their tours of duty.

Who gets selected? “The Chief of Naval Air Training selects the “Boss,” the Blue Angels Commanding Officer. Boss must have at least 3,000 tactical jet flight-hours and have commanded a tactical jet squadron. The Commanding Officer flies the Number 1 jet. The Chief of Naval Air Training also selects the “XO,” the Blue Angels Executive Officer. XO is a Naval Flight Officer (NFO) or Naval Aviator with at least 1,750 flight-hours.

“Career-oriented Navy and Marine Corps jet pilots with an aircraft carrier qualification and a minimum of 1,250 tactical jet flight-hours are eligible for positions flying jets Number 2 through 7. The Events Coordinator, Number 8, is a Naval Flight Officer (NFO) or Naval Aviator who has finished their first tour. The Marine Corps pilots flying the C-130J Hercules aircraft, affectionately known as “Fat Albert,” must be aircraft commander qualified with at least 1,200 flight hours.

“The mission of the Blue Angels is to showcase the teamwork and professionalism of the United States Navy and Marine Corps through flight demonstrations and community outreach while inspiring a culture of excellence and service to country.”

Just about every two years, the Blue Angels come to the Bethpage Air Show at Jones Beach to thrill audiences. This year, they performed in front of a capacity crowd of 181,000. Here are photo highlights.

The Blue Angels typically alternate with the U.S. Air Force Thunderbirds who are scheduled to headline 2023 Bethpage Air Show at Jones Beach next Memorial Day weekend.