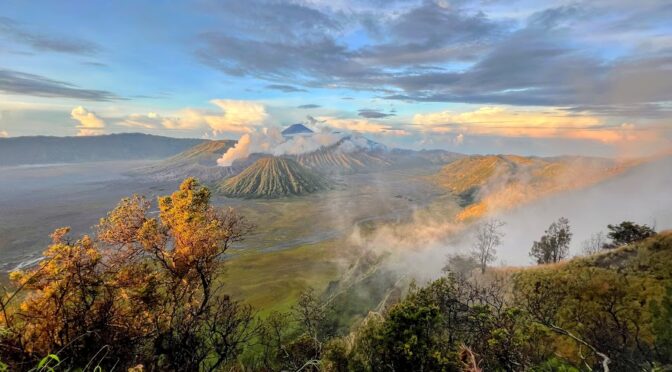 Eric and Sarah are on a 6-month around-the-world sabbatical, joining a huge movement of young people who are choosing to live the nomadic life (at least for a time) and travel or work remotely, becoming immersed in local life and culture. They are filing these dispatches periodically. They previously reported about their adventures in Mexico, South Korea, Vietnam, Malaysia and Cambodia. Here’s their dispatch (#4) from Indonesia:

Oddly enough, we write this from basically our last day of summer, as we wrap our 3 months of traveling Southeast Asia and head south to Melbourne, Australia tonight where deep winter awaits. If ya’ll are wondering how we are possibly spending every minute of every day together, the answer is our deep, eternal bond and newfound zen mentality. JUST KIDDING, the answer is podcasts, we listen to a lot of podcasts. 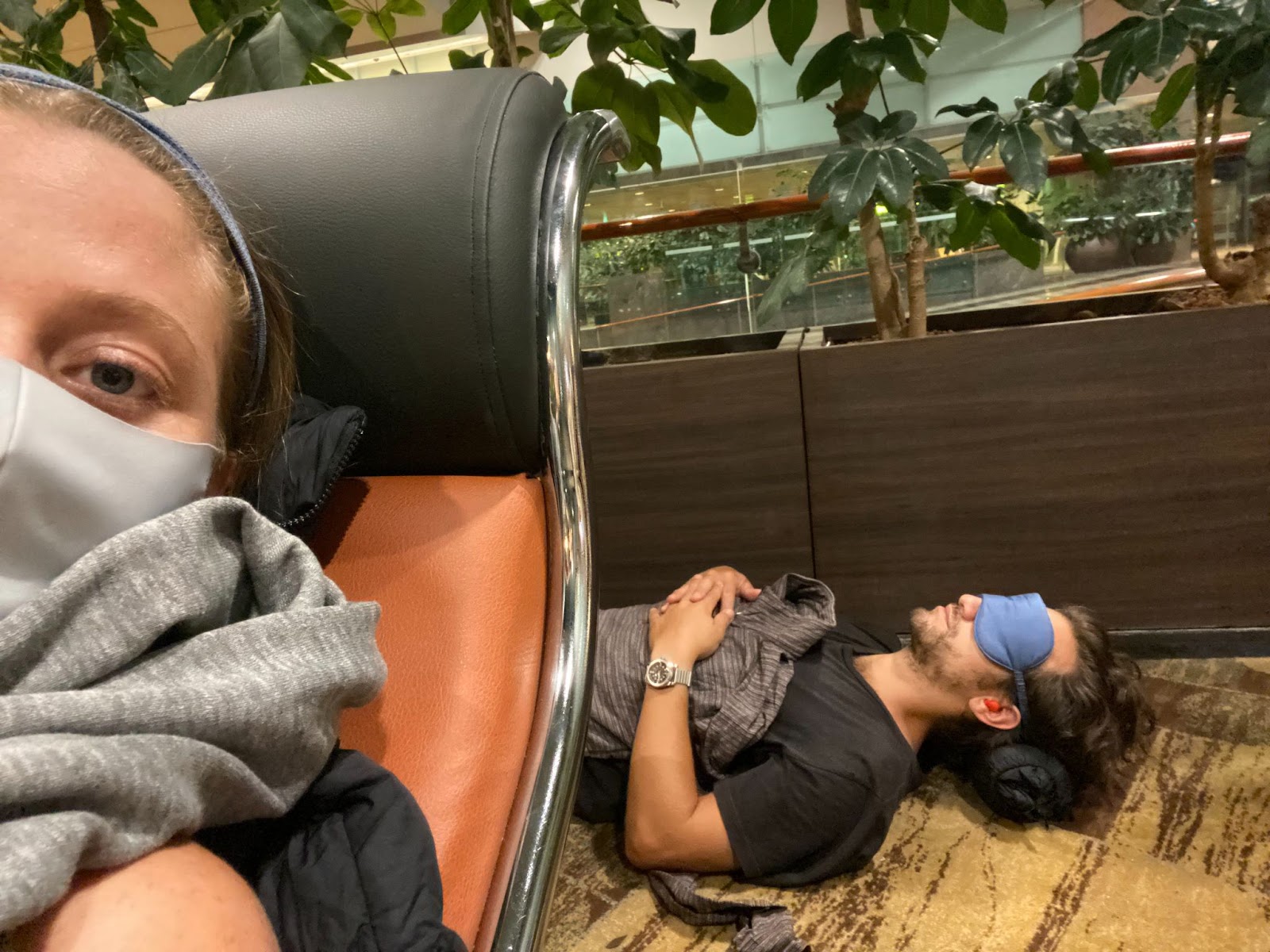 We kickstarted the month of June with an overnight layover at the Singapore airport, which we were somehow excited for (what is wrong with us?). Perhaps because we expected that we could make our experience at least as good as glamping at this airport-from-the-future. We peacefully strolled the airport’s mall and butterfly garden, and even peeped the medical center and movie theater (sadly no movies during the pandemic), all the while unknowingly giving up any and all of the free sleeping pods. The airport hotels and spas were grossly out of budget, so when 10PM rolled around, cut to Eric on the floor with his trusty eye mask and earplugs, and Sarah curled up on a hard chair with a true-crime podcast to lull her to sleep.

A short plane-ride later we touched down in Java, Indonesia’s most populous island, where we encountered probably the most difficult language barrier of the trip thus far. We also found ourselves consuming some form of fried rice or noodle, sprinkled with egg, meat and veggies for breakfast, lunch, and dinner. But our main mission here was tackling two volcano treks; first up- Mount Bromo. We set out on the sunrise trek to the viewpoint of this beautiful volcano at 3:30AM. Along the way we’d come to understand that treks in Indonesia have accessible peaks by many means-jeeps, motorbikes, horses, and even human carts (yes, you can pay approx $35 USD to have three men push you in a rickshaw/adult stroller up the extremely steep face of a volcano).

At first, Sarah found the many options beyond hiking really cool from an accessibility standpoint (you can take the OT on a sabbatical, but you can’t take the OT out of the OT on the sabbatical.. or whatever). But, we came to find these avenues (including the cart) are utilized by fit people, even dressed in hiking gear (!?). The views were incredible, and we were proud of ourselves for earning the trek, but the peaks were super crowded. 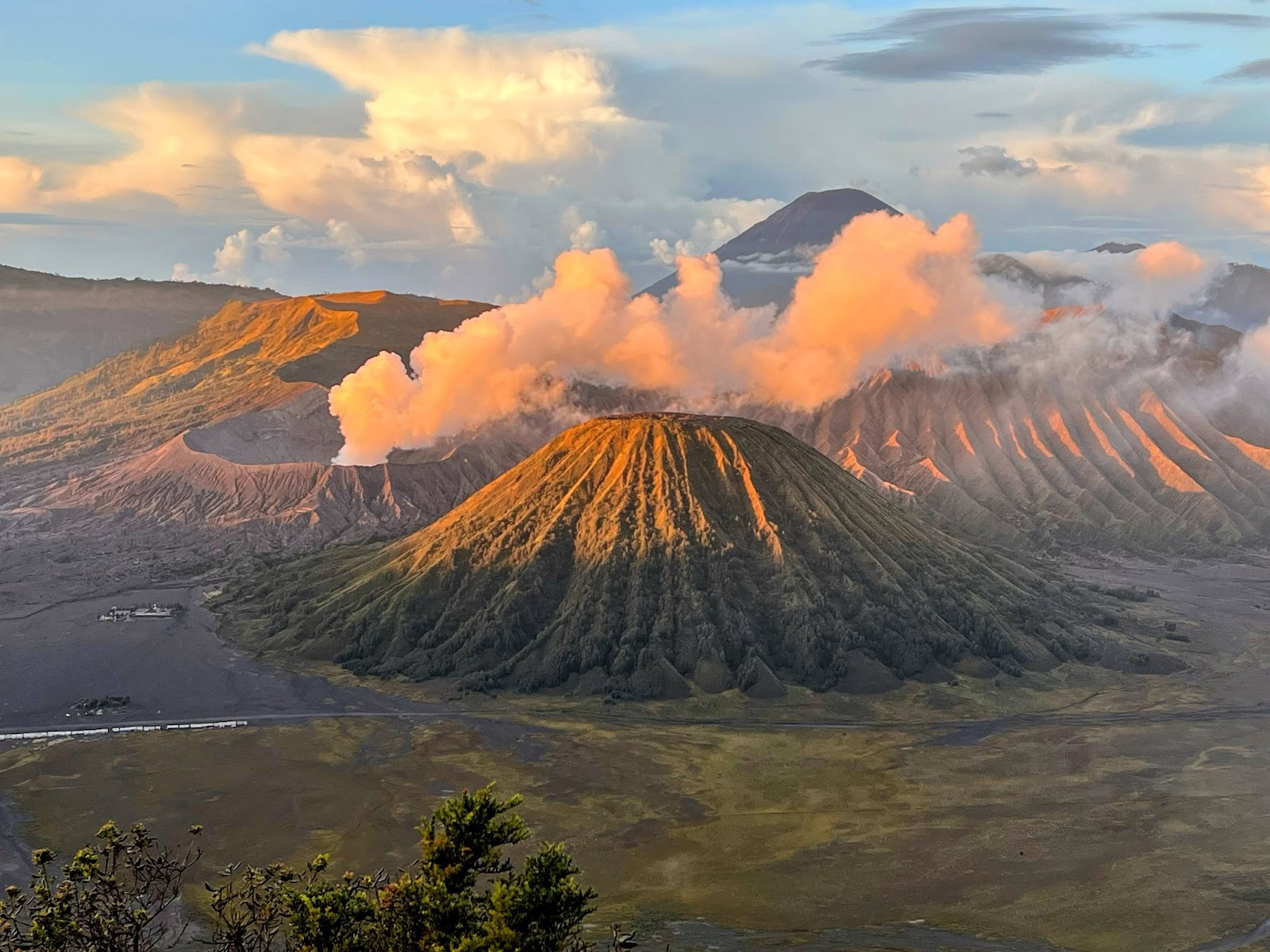 Second, we journeyed to Mount Ijen in far east Java. Mount Ijen is unique in that it is home to one of the last sulfur mines still mined exclusively by hand, and the most sulfuric lake in the world (with a pH of 0.2). Sulfur vents burn neon blue flames in the middle of the night, which is what we were aiming to see when we woke up at 1AM and motorbiked up the dark and steep winding mountain roads to begin the trek at 2AM.

The trek itself involved hiking up to the top of the crater, then down into it (with gasmask in hand because of the sulfur fumes) alongside the sulfur miners who do this backbreaking trek with 150–200 lbs of sulfur bricks multiple times a day (!!). We cheaped-out and didn’t hire a guide, so we stuck close to a guided group during the crater descent for some free advice. The one thing we heard: “be careful this water is very hot” as we came upon a creek. But uncoordinated and distracted Sarah (remember the part above about the murder podcasts?) stepped on the first rock jutting out of the stream, immediately panicked, wobbled, and stepped off her rock, one foot, then two.. *SPLASH* right into water more acidic than battery acid. She quickly scampered to the side, gritted her teeth, and waited for her feet to dissolve. BUT PHEW, by some good fortune, absolutely no harm was done.

The blue fire was cool but Eric was sure we were doing lifelong damage to our eyes and lungs so we snapped some pictures and got THE HELL out of there. We walked back up the crater rim to see the sunrise, and chivalrous Eric lent his dry hiking socks to Sarah before we scurried down the mountain to try to beat the rickshaws. 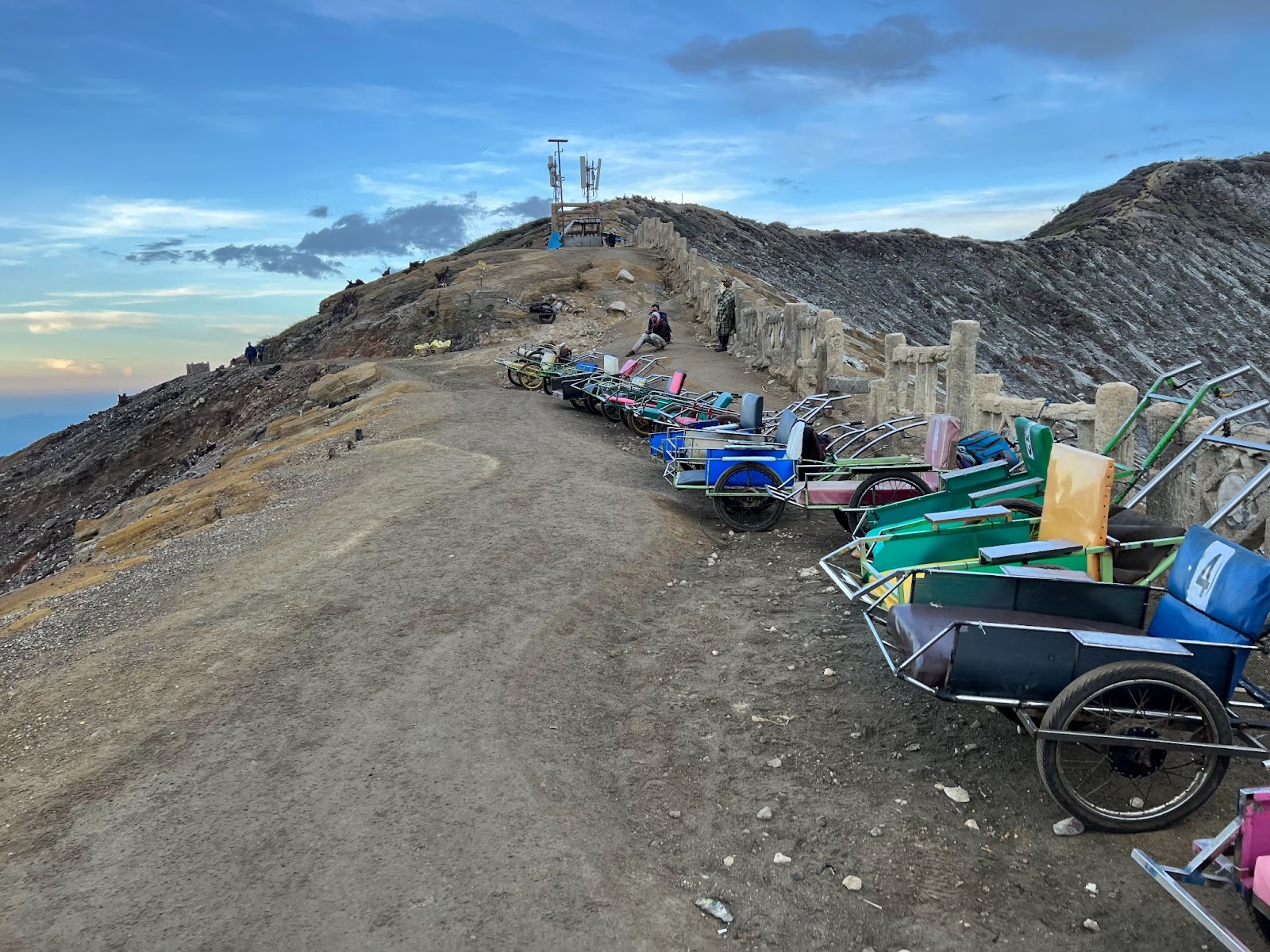 We went home to crash at our accommodation down the hill from Ijen–a bamboo hut with curtains instead of walls–which looked quite dreamy online, but the constant ripping from sleep by the sound of critters scurrying around, and in, our hut (and Eric’s accompanying yelps) made this a true instagram-vs-reality situation. The hosts were very sweet, but we were excited to get THE HELL out of there (again).. we packed our bags and took the $1 ferry east to Bali.

Indonesia as a whole has a Muslim-majority population, but the island of Bali is predominantly Hindu. We observed their appreciation and respect for nature when they’d place offerings of flowers, fruits, and leaves on their doorsteps each day to nourish the gods. North Bali felt largely untouched by mass tourism, and we took serious advantage of the empty beaches and $5 fish dinners (for two).

Once we made our way south to Ubud, we were transported to another world of pre-pandemic travel. Streets full of tourists flocked to cafes where the most popular item on the menu was something like Buddha Bowl, or Keto Kale Bowl. We dabbled in many different yoga classes (even accidentally signing up for 90 minutes of breath work), and ate smoothie bowls to our hearts’ content.

Further south in Canggu and Uluwatu we sat on many-a-beach watching absolutely insane surfer talent, on literally every wave. Though we must admit the beaches weren’t the best for the non-surfers; sticky sand, lots of rocks, and strong currents.

In very Bali fashion, we lunched next to Kelly Slater in west Uluwatu. Unfortch, it was at this spot that Eric’s burrito fell apart as soon as he picked it up. As he was putting it back together, he spotted a worm crawling through the lettuce. Eric plucked it out and we watched it inch across his hand. We had to act cool in front of Kelly of course, so we just made pity faces at each other and shrugged. Eric blissfully chewed on while Sarah stared off in space, thinking about all the bugs we’ve likely consumed, buried in street food this trip. 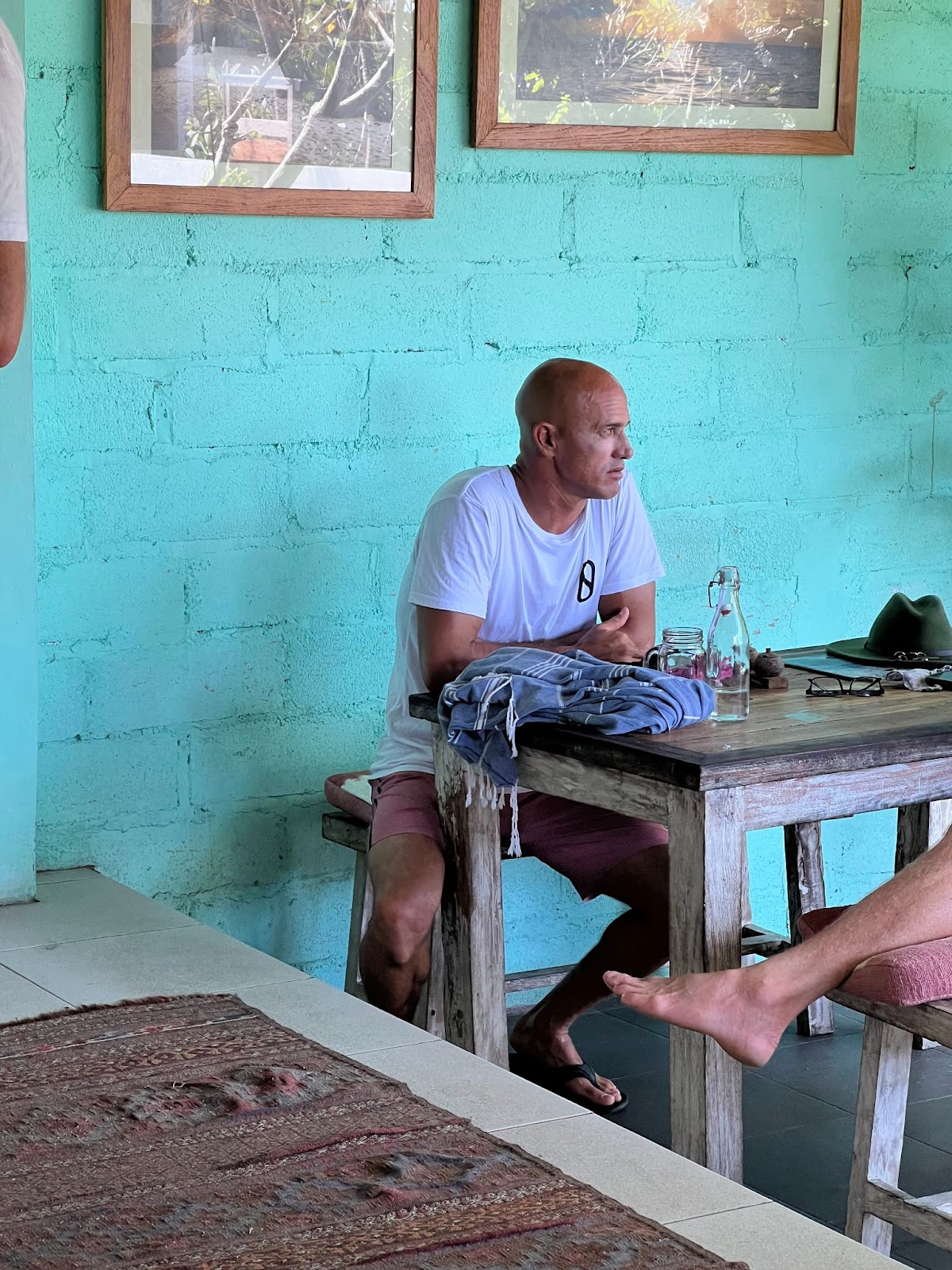 In very Bali fashion, we lunched next to surfer Kelly Slater in west Uluwatu. © Eric Leiberman/goingplacesfarandnear.com

Before leaving the island of Bali, we followed a friend’s recommendation of spending an evening at The Istana: a luxury wellness and “biohacking” center on the edge of a cliff. After locking up our phones, per policy, we explored the various hot/cold pools and chatted with the characters (mostly expat locals) who frequent The Istana. Along the way we met Poppy, a ~12 year old girl (?? she didn’t actually know how old she was) who was born to British and Swedish parents on a sailboat in Panama when her parents were living at sea for 6 years. She told us she goes to forest school in Uluwatu with 4 other expat kids in her age group, and that her older brother (who sounds like he’ll be a professional surfer) was pulled out of school because his parents thought he was being taught “too many sad things”. Hippie parents take on entirely new meaning in Bali. 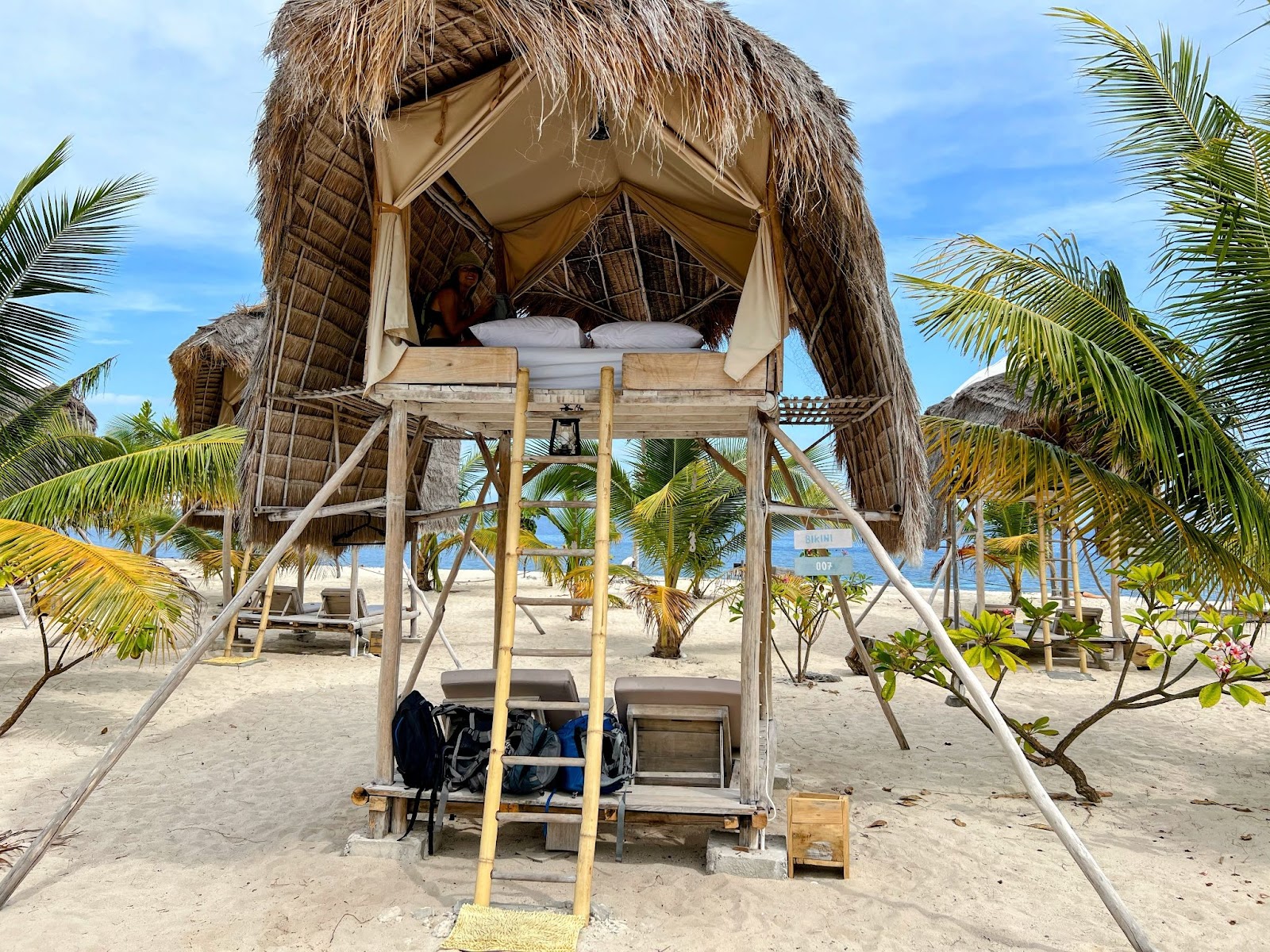 On Flores, we spent 3 nights on a remote island living in a beach hut, playing ping pong and attending movie nights & bonfires with the same 30 people every day © Eric Leiberman/goingplacesfarandnear.com

Our last stop in Indonesia (where we write this dispatch) is the island of Flores, a plane-ride east of Bali. This leg of the trip started great – we spent 3 nights on a remote island living in a beach hut, playing ping pong and attending movie nights & bonfires with the same 30 people every day (essentially Jewish summer camp). But when we got back to mainland Flores, things took a turn..

We didn’t intend to spend an entire week at the port-town of Labuan Bajo, but we did. Did we like Labuan Bajo? Lets just say we ate pizza for four consecutive nights and our highlight each day was going to Starbucks and ordering an iced matcha/espresso hybrid (the classic coffee is tragically bad in Indonesia-mostly instant coffee or pour-over in your mug that’s watery and gritty, which while drinking Eric constantly remarked, “HOW IS IT SO BAD, THEY GROW IT RIGHT THERE?! [points to any mountain in the vicinity]”).

This town is known basically for one thing, and that is its proximity to Komodo National Park, a boat ride away. Eric be-friended (then be-enemied) all of the local guys in town running the racket of booking boats. We’d come to learn that the dozen of them are all in cahoots, upselling while funneling you to the same 1-2 boats actually in the harbor. Our boats were confirmed, deposits paid, and then canceled the night before for varying fabricated reasons, keeping us in the vortex of this mind-numbing town for more days than we’ve spent in any single town on this trip (read: gut-wrenching). We finally got a boat on our last day in Indonesia, and saw the elusive Komodo, which exists in the wild only here (it’s a carnivore and cannibal, mothers even eat their own babies so the little ones hide in trees for the first three years of their lives- WTF). Our boat also plopped us on an island with a pink sand beach for an hour, so we left happy 🙂

Onward to the depths of winter – first in Australia, then New Zealand then closing out this crazy adventure in South America.