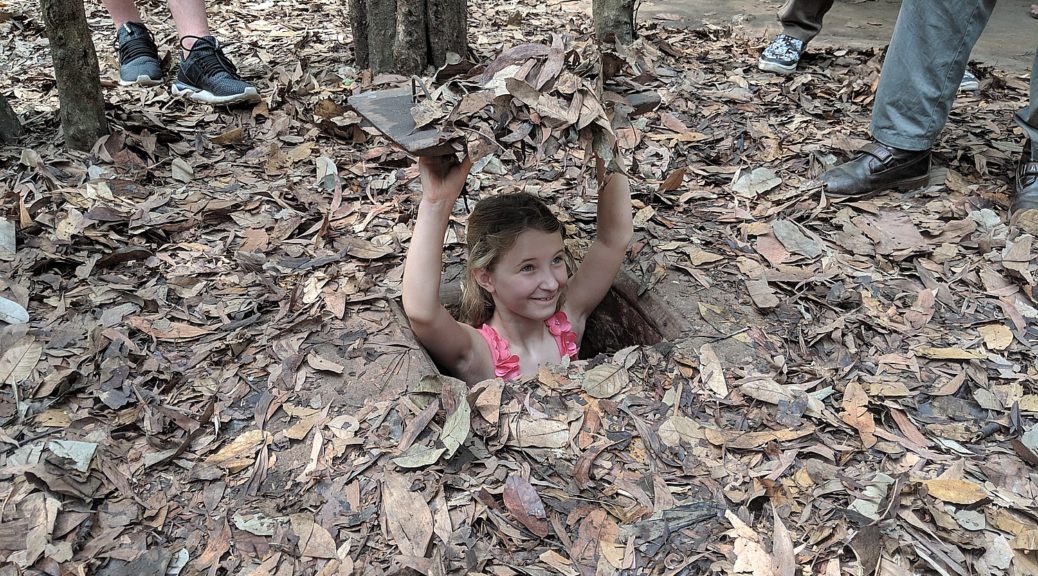 Our second day in Saigon, Vietnam. I am lucky enough to get on a Saigon Tours half-day trip to Cu Chi Tunnels, an immense network of connecting tunnels located in the Củ Chi District of Ho Chi Minh City (Saigon), which the Viet Cong used to launch guerrilla warfare against the Americans during the Vietnam War.

(Saigon is the second leg of nine during a 23-day, around-the-world Global Scavenger Hunt, “A Blind Date with the World,” where we don’t know where we are going until we are given 4-hour notice. Under the Global Scavenger Hunt rules, you are not allowed to take a commercial tour, or hire a private guide, or even use a taxi for more than 2 scavenges at a time, since the object is to force you to interact with locals. I knew that even though the visit was one of the “Bonus” scavenges, I wouldn’t get points, also my teammate Margo, was doing her own thing in Saigon, visiting the Botanical Gardens.)

The visit is profound, and though the script is written by the victors, is appropriate to represent the side that wanted to push out colonists (though in retrospect, I realized that there was no real mention of the fact that the South Vietnamese leadership didn’t want the Communist North Korean leadership to take over, either – nothing is simple, especially not in the world of geopolitics). You have to appreciate the commitment and courage and sacrifice of the Viet Cong in living the way they did – creating a virtually self-sufficient community under ground, planting boobie traps for the Americans, repurposing unexploded bombs into weapons and old tires into sandals, cooking only at night and channeling the smoke to come up in a different place (where it would look like morning steam, so not to give away the location of the tunnels). We get to climb into a tunnel, and go 20, 40, 60, 80 up to 160 meters, seeing just how tiny they were – you have to crouch all the way through and sometimes even crawl. There is also a shooting range where you can shoot an AK 47, M16 (extra charge), but the constant sound of gunfire gives you some sense of what they were living through. There was a hospital, a wardrobe sewing area, we watch a woman demonstrate making rice paper. At the end is a film that uses grainy black-and-white imagery with a narration that spoke of the commitment to save the Fatherland from US aggression.

On the way back, the guide offered to make a detour to take us to a factory, created by the government to employ people who were handicapped because of coming upon unexploded ordinance, or who had birth defects as a result of the chemical weapons used against the Vietnamese. Originally the factory produced cigarettes, but today, they produce really beautiful handicrafts – mainly lacquered and inlaid items.

The trip provides an excellent opportunity to see other Vietnamese communities outside of the urban center.

After returning to Saigon, I go off to continue my theme – visiting the buildings that the French built, starting with the magnificent Post Office (where I wind up spending close to an hour choosing from a stunning array of post cards, buying stamps and writing the cards), then onto the Reunification Palace (which I thought was open until 5 but closed entrance at 4), then on to the War Remnants Museum, where I visited until it closed at 6 pm, because there was so much to see and take in.

You should begin on the third level, which provides the “historic truths” (actually the background) for the Vietnam War, which more or less accurately presents the facts. On this level is a most fascinating exhibit that presents the work of the multinational brigade of war correspondents and photographers, along with a display of the dozens who were killed in the war. The photos are presented in an extraordinary way: showing the photo, then providing notes about the background, the context, and the photographer. Here too, the language (which was probably produced by the news organizations that put on the exhibit), was accurate. Among them is the famous, Pulitzer-prize winning photo of “Napalm Girl” where, for the first time, I notice the American soldiers walking along and one who looks like he is casually lighting a cigarette as this young girl is coming down the road in terror. The photos then and now are chilling, but today, they properly evoke shame.

It only gets worse on the second level, where the atrocities committed during war are provided in the sense of artifacts, and details that could have, should have properly been used at war crimes trials. But none took place. Another exhibit documents the effects of Agent Orange.

The first floor, which should be visited last, addresses the Hanoi Hilton, the place where American prisoners of war, including Senator John McCain, were kept. Here,though, is where it can be said the propaganda offensive takes place – there are photos showing a female nurse bandaging an American’s head wounds, with the caption that noted she had put down her gun in order to care for him. This exhibit brings things up to date, with the visits of President Clinton in 1994 (in another section in noted that Clinton’s visit brought the end of economic sanctions, and with the country’s shift to market economy, produced revitalization, as measured by the boom in mopeds.

But on the bottom floor, they show photos of Obama’s visit and most recently of Trump in Vietnam.

This floor also has an exhibit devoted to the peace movement in the US and around the world, with some famous incidents, such as the shooting of the Kent State four.

Outside are displays of captured American plane, tanks, and other items.

I looked around for an American who might have served in Vietnam to get an impression, but did not find anyone, and saw a few Vietnamese (most of the visitors were Americans or Europeans), but only one or two who might have been alive during that time and wondered what they thought. Clearly the conclusion of the displays was in favor of reconciliation when just as easily, and using a heavier-handed propagandist language, could have stoked hatred. The exhibit is careful not to paint all Americans and not even all American soldiers as monsters but one photo caption was particularly telling: it showed an American hauling off an ethnic minority and noted that “American troops sent to the battlefield by conscription knew nothing about Vietnam, thought the Cambodia people of ethnic minorities were living near Cambodia were collaborators for the enemy.” I left feeling that the experience was close to what you feel visiting a Holocaust Museum. And it is pain and remorse that is deserved.