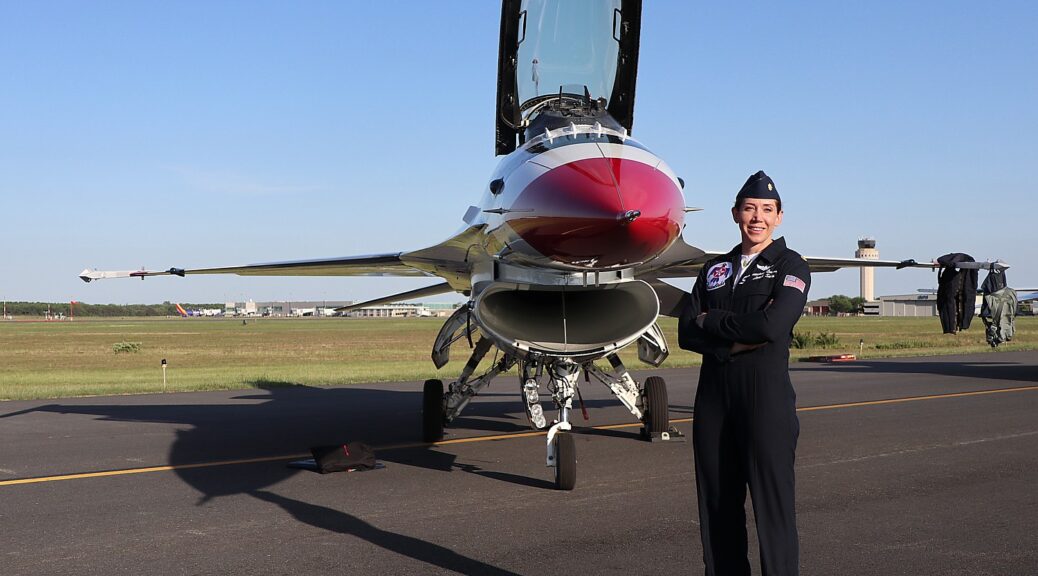 I got to watch the USAF Thunderbirds arrive at MacArthur Airport ahead of their headlining appearance at the Bethpage Air Show over Memorial Day Weekend at Jones Beach State Park, and then got to speak with the pilots. I confess that I have admired Michelle Curran, only the fifth woman (since 2005) to pilot one of the formidable F-16 jets, since I first saw her in the 2019 Bethpage Air Show, when she was the #6 (opposing solo) pilot. This year, she is the lead solo doing the daring-do maneuvers, where two opposing fighters come at each other at, like, 1200 mph. And she does it upside down (almost the equivalent of Ginger Rogers doing it backwards and in heels?). I couldn’t be more excited to meet her if she were Beyonce. And I am not alone.

“People come up and say ‘I’m so proud of you,’ – something your mother would say. It shows the impact we are having,” she says.

She reflects that last year, the personal contact with people was lacking, but the team did city- flyovers, honoring health workers, essential workers and first responders. People would send photos and such, showing how moved they were to see the flyover.

“it has been awesome to be part of that, to be in this position, in this time of history. I will look back.”

She reflects what it is like to be part of this very special team – there are 130 on the team.

“It’s like no other organization I have ever been a part of,” said Curran, who has been in the Air Force for 12 years.  “I fly for them, not to let them down.”

But she adds, “And for all those little kids – they may not ever become a pilot, but they may think, ‘Maybe I can do that hard thing I didn’t think I could’.”

“Moms drag their daughter over, ‘She just flew!’  I makes them realize doors are open to them.”

The team flies in many countries and parts of the world where it is unthinkable for a woman to be a combat pilot. And she is aware of what seeing a woman in her role can mean. “I see that look on faces – that light bulb moment.”

She is the fifth woman to fly with the Thunderbirds (the first was in 2005). Just 2% of pilots are women. “We know each other – a sisterhood.”

It’s become more accepted, but she is aware of things that women have to “navigate” that men don’t even think about.

Curran is in her third year on the air force’s elite demonstration team – usually, the special assignment only lasts two years, but because of COVID-19, the tour is extended – and now is the lead solo pilot. The number of her jet, 5, and on her uniform, and the uniform of her crew (who are also women), are upside down, because in her role, she spends most of her time inverted, even as she makes that thrilling opposing pass.

We ask what it feels like to fly. Is she nervous at all? They practice so much, it is all quite routine, even the communications between pilots. “It’s all very professional in the air with the comm. No. 6 [the opposing solo] gives the challenge and the response, but I can hear his energy. When all six [of the Thunderbirds] come together, if the air is smooth, we’re all firing on all cyclinders, it’s a cool feeling.  But when we’re down on the ground, and talk to each other, we might say, ‘Wow, we worked hard.’ Or ‘ We really crushed it.’”

“I do normal things in the morning. It hits me when I step out to the jets. Game on. There is a charge of adrenalin, but once I take off, it is just focus. I’m in my happy place. I know what I need to do. Focus.”

Her call sign is “Mace” (which she uses in her social media, @mace_curran)– and while she doesn’t reveal the secret to what is behind the nickname, she says it is a tradition in a fighter squadron to get a call sign they are mission qualified. “The whole squad gets together, talk about dumb mistakes – and then you get a call sign.” But the origin remains a secret.

Curran entered the Air Force in 2009 with a Reserve Officer Training Corps commission from the University of St. Thomas in St. Paul, Minn. She completed the Joint Specialized Undergraduate Pilot Training in Columbus, Miss., and was assigned to the F-16 at Misawa Air Base, Japan. Curran has flown more than 1,500 hours in the F-16, including 163 combat hours over Afghanistan in support of operations Resolute Support and Freedom’s Sentinel. Prior to the Thunderbirds, she was an F-16 Instructor Pilot and Flight Commander at Naval Air Station Joint Reserve Base Fort Worth, Texas.

I also get to chat with Maj. Zane Taylor, the right wing pilot flying the No. 3 jet.

He is the epitome of what the Thunderbirds are about. A native of Orlando, Florida, he reflects that he first saw the Thunderbirds when he was just four or five years old, and was so awed, he wanted to fly. “I knew it was something I wanted to do – not that the dream would come true but there are steps and I could do the best I could.”

He didn’t imagine then he would become one of the Thunderbirds, and even now, reflects “being proficient is one thing, but it takes luck and timing to get the F-16.”

The F-16, he says, is basically an “engine with wings” – it can fly at supersonic speed (though the FAA no longer allows it at air shows).

He reflects that he is ‘just a standard Air force fighter pilot, flying every day, multiple times a day to master maneuvers.” Except for the pretty paint and smoke, the maneuvers the Thunderbirds fly are the same for what are used in their combat training.

Like Curran, he says it is the team of 130 that make the Thunderbirds possible. “The plane doesn’t fly if just one doesn’t do their job.”

His call sign is “Strobe.” He wouldn’t give the back story of how he came to be called “Strobe’ either, except to say, “As a young pilot, I thought I knew what was going on. Most call signs are not flattering.”

Taylor is a 2010 graduate of the U.S. Air Force Academy, where he majored in Systems Engineering. Prior to joining the Thunderbirds, he served as an F-16 evaluator pilot, Holloman Air Force Base, N.M. He has logged more than 1,700 flight hours, including more than 280 combat hours over Iraq and Syria in support of Operations Inherent Resolve.

He is in his third year on the Thunderbirds. He expects he will go back to a combat air squadron after this assignment is finished, and based on his age and experience, could become the director of operations.

He says that among his favorite things are riding roller coasters (he was looking forward to getting a ride on the Cyclone at Coney Island).

The other pilots include:

Maj. Ian Lee is the Left Wing Pilot for the U.S. Air Force Air Demonstration Squadron, flying the No. 2 jet. He is a 2010 graduate of the U.S. Air Force Academy, where he double majored in Economics and Management. Prior to joining the Thunderbirds, he served as the Chief of Weapons and Tactics of the 79th Fighter Squadron at Shaw Air Force Base, S.C. He is a graduate of the U.S. Air Force Weapons School and has logged more than 1,700 flight hours, including more than 470 combat hours in support of Operation Inherent Resolve and Operation Freedom’s Sentinel. He is in his first season with the team and hails from Cerritos, Calif.

Maj. Michael Brewer is the Slot Pilot for the U.S. Air Force Air Demonstration Squadron, flying the No. 4 jet. He is a 2005 graduate of Embry-Riddle Aeronautical University, Prescott, and commissioned from Officer Training School, Maxwell Air Force Base, Ala., in 2010. Prior to commissioning, he flew as a commercial flight instructor, cargo pilot and airline pilot. Prior to joining the Thunderbirds, he served as an F-15E Instructor Pilot and Flight Commander of the 334th Fighter Squadron at Seymour Johnson Air Force Base, N.C. He has logged more than 5,800 total flight hours and 1,050 hours in the F-15E, including more than 315 combat hours over Afghanistan, Iraq and Syria in support of Operation Enduring Freedom and Operation Inherent Resolve. He is in his third season with the team and hails from LaGrange, Ill.

Maj. Kyle Oliver is the Opposing Solo Pilot for the U.S. Air Force Air Demonstration Squadron, flying the No. 6 jet. He majored in Communication Technology and Music and earned his commission in 2010 as a graduate of Ohio State University’s Reserve Officers’ Training Corps program. Prior to joining the Thunderbirds, he was an F-22 Instructor Pilot at Joint Base Langley-Eustis, Va. He has logged more than 1,300 flight hours, including more than 230 hours of combat experience over Iraq and Syria in support of Operation Inherent Resolve. He is in his second season with the team and hails from Beavercreek, Ohio.

Lt. Col. Kevin DiFalco is the Director of Operations for the U.S. Air Force Air Demonstration Squadron, flying the No. 7 jet. He majored in Aerospace Engineering at the University of Colorado at Boulder and earned his commission in 2004 through the Air Force Reserve Officers’ Training Corps program. Prior to joining the Thunderbirds, he served as the Assistant Director of Operations of the 555th Fighter Squadron and Director of Operations for the 31st Operations Support Squadron at Aviano Air Base, Italy. He is a graduate of the USAF Weapons School, a 2016 and 2020 NASA Astronaut Air Force nominee and has logged over 1,900 hours of flight time, including more than 297 hours of combat pilot experience. He is in his second season with the team and hails from Fort Collins, Colo.

The Air Force’s official air demonstration team, designated the 3600th Air Demonstration Unit, was activated at Luke Air Force Base, Arizona in 1953. The unit adopted the name “Thunderbirds,” influenced in part by the strong Native American culture and folklore from the southwestern United States where Luke Air Force Base is located.

See more, including their schedule of performances, at the US Air Force Thunderbirds site, afthunderbirds.com.