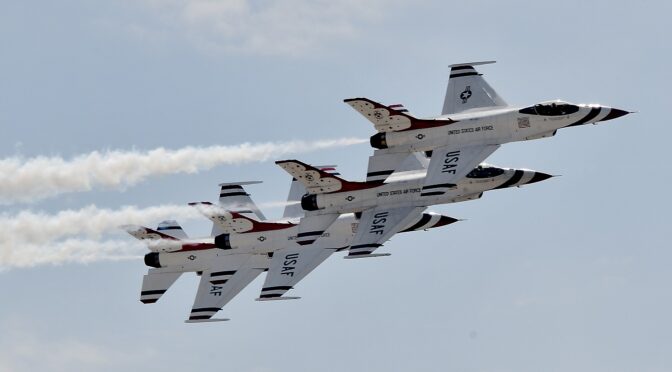 Update: At this writing, the Bethpage Air Show was scheduled for Memorial Day, Monday, May 31. All tickets for Saturday and Sunday were to be honored.

The Bethpage Air Show at Jones Beach State Park was canceled Saturday due to weather, the state Office of Parks, Recreation, and Historic Preservation said in a statement. However, a livestream of Friday’s practice sessions – include footage from go-pros from the pilots and a Thunderbirds chase plane that shadowed the F-16s in their thrilling maneuvers –  is airing on  Saturday, 10-3 pm.  It can be seen on WABC-TV, as well as on WABC’s Connected TV Apps on Amazon Fire TV, Android TV, Apple TV, and Roku. The original plan was to livestream the rain date of Sunday, May 30, 2021. (It was not known whether Sunday’s show would also be canceled for weather).

The $10 event passes to the show can be returned in exchange for two free passes to visit any state park.

The show, which would have been the 17th at Jones Beach State Park, brought special excitement because of having been cancelled last year due to COVID-19, and the opportunity for crowds – albeit at 50 percent capacity – to gather again is a vital sign of the region’s return to normalcy. At this state park and many others around the state, free COVID-19 vaccines were being administered (with two-day passes to state parks as an additional incentive).

Here are photos from the practice performance including:

An air show first, livestream viewers will be treated to a special inside look at performances. The GEICO Skytypers, the A-10 Thunderbolt, David Windmiller and Michael Goulian will have cameras on board their planes to provide viewers with an in-cockpit perspective, live, during the show. It’s these videos which will be streamed in place of Saturday’s performance.

At this writing, there was no decision on whether the Sunday performance would take place. Known to many as the Greatest Show on Long Island, the Bethpage Air Show was canceled last year due to the Covid-19 pandemic.  Show organizers instead held the first Bethpage Virtual Air Show which enabled fans to experience performances straight from the pilots’ cockpits.

For up-to-date information about this year’s show, visit  www.bethpageairshow.com or https://www.facebook.com/BethpageAirShow/, or contact the New York State Office of Parks, Recreation and Historic Preservation, Regional Office, Recreation Department at 631-321-3510.