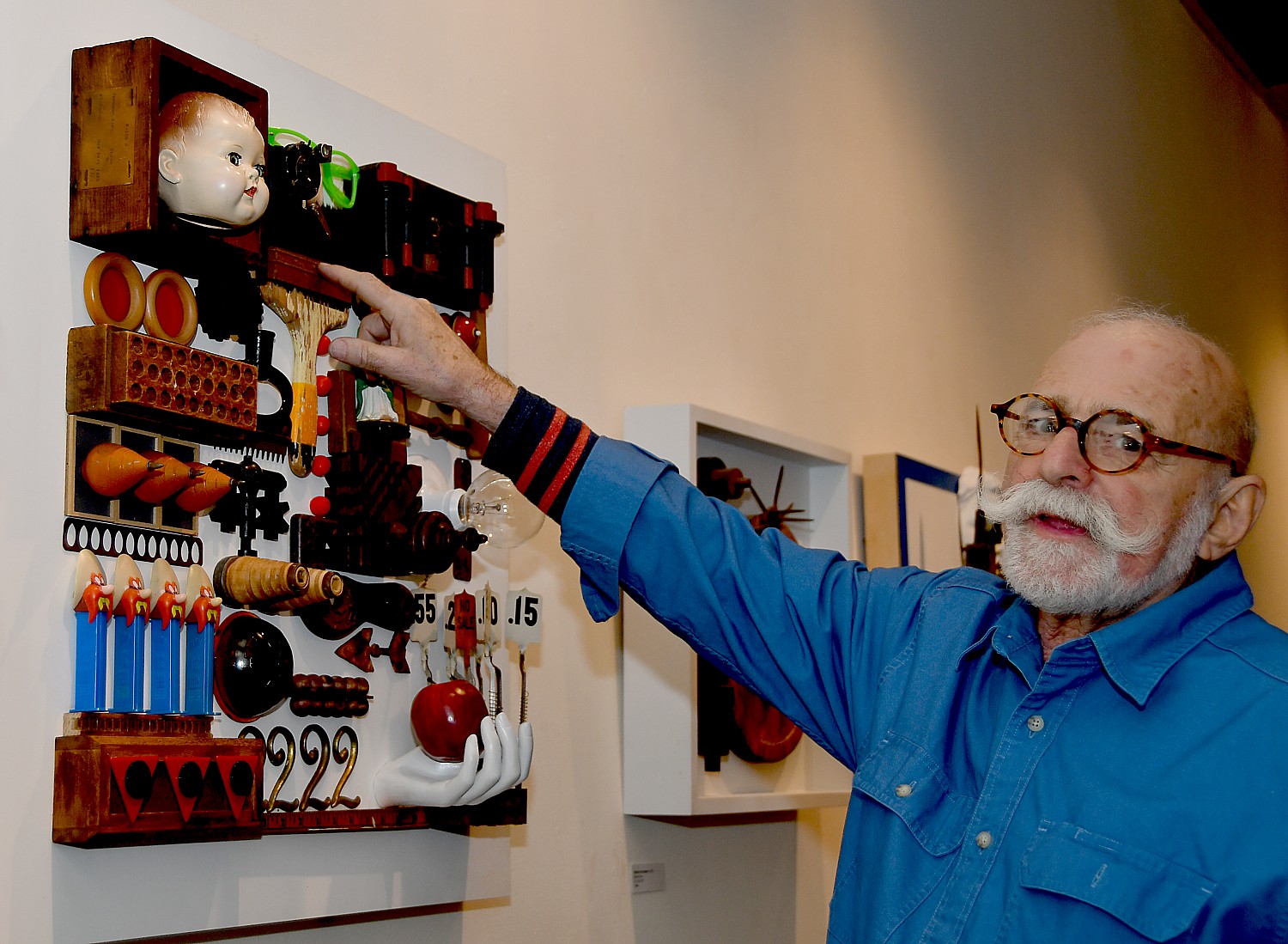 When RJ Rosegarten left Great Neck 17 years ago, where he had gone to school, raised a family, had a career in advertising and served as Mayor of the Village of Great Neck Plaza, he was finally free to pursue an ambition from childhood: to be an artist.

He returns to the Gold Coast Arts Center in Great Neck Plaza – which as mayor he helped bring fruition – with a show, “Lost & Found: the Art of Assemblage” which draws upon his strong sense of design and construction. The exhibition is on view through March 12.

“Assemblage involves the thoughtful combination of elements to create something new and original,” states Jude Amsel, the curator who installed the massive exhibit of some 50 works.

RJ Rosegarten (better known by Great Neckers as Bob) claims that the pieces are not intended to hammer home a theme or message or story, that he approaches the work from the point of view of design, color and form, meticulously choosing objects that together form the image he has conceptualized in his mind.

At the end of it, he says, he comes up with a title. “That’s often the most difficult part,” he says.

His humor comes through with the titles (“it’s Great to be King”), but don’t read in a theme or moral – it’s for the beholder to find your own meaning.

But if the piece is built around an aesthetic, the choice of objects – each with their own meaning – the title, in fact, broadcasts a mood, emotion or message even if was subconsciously in Rosegarten’s mind, or resounds in the viewer’s own head. The design captures your attention, but then you keep going back to explore and discover and your head forms its own patterns and themes.

He describes his effort obtaining just the right red delicious apples (so realistic you think they are actual fruit), for his piece, “Legacy of the Red Apple,” (2016). He had two heads that he fused into one, like Siamese twins. Why apples? “In the Garden of Eden, the Tree of Knowledge had fruit.”

He can tell you the provenance of each object in the piece – where he obtained the silver head in “Sarah Silverstone Presents” and how it took a long time before he found just the sunglasses he wanted for the piece, how the drawer it is assembled in came from a factory (the writing is on the side). He sees Sarah as a person, referring to Sarah as “her”. Indeed, the two gauges and thermometer evoke her personhood, even symbolically.

There is a story behind every piece – about how I got there, where the pieces came from – can tell you where every piece came from – glasses – looked for it a long time – looked for a long time where to put – fit on Sarah – gauge, knew where it would go – design them, lay them out, do not glue them, leave for a week, come back and keep looking at them, move around, put pieces in/out, then glue, last stage – once glue, sign name, over – can’t go back and say I wish I put a ball in there.

“Sarah Silverstone has a twin sister,” he says, explaining that he bought two of the metallic faces. “Sarah represented to me the absolute woman, a sexy woman; her sister is so sexy, every time I pass her, I talk to her, ‘Hope you have a nice day.’”

He has the same personal connection with the “Wizard of Odd” and the “Thought Collector”.

The personal connection is manifest in his work, Dorzi/Dorzi, built around a vinyl record, but not just any 1950s 45rpm. His friend made the label to suggest it was made by the Bobby Randall 3 band. You learn that Bobby Randall, he explains  was non-ethnic name Rosegarten was going to use when got out of college and was going into advertising. (He was discouraged from changing his name by his grandmother.) There are 3 hands – for the three band members, in a pose as if they are snapping their fingers to the beat.

His grandmother and grandfather appear again in small photographs that are embedded into a series of four “Junk Drawer” works.

Junk Drawers may look like a hodgepodge, but are not random, he says.

“I visualize what junk drawers have,” he says. “Everyone has junk drawers – in bedrooms, kitchens, desk drawer, basement.” He chooses the items that fill the drawers (which he builds) independently, and over time, lays them out and photographs them. “Then I take everything out and glue back the items one by one.”

The Junk Drawer series each has a photograph of grandmother and grandfather at Rockaway Beach.

One of the boxes has a plastic Howdy Doody figure, while another has the Princess character from the show. He says he goes for colors, shapes and looks for holes.

“It’s not nostalgia,” he insists. But as he knows the provenance of every piece – some have personal connection, like the photos of his grandparents and a John Lennon/Imagine photo.

“Every time you look, you see something else.” Or actually, you “find” something new.

But looking at the items, it is hard not to become nostalgic as you find items that spark memories of your own past. The Junk Drawer series and his Americana series are like mini-Smithsonians of American cultural icons of the 1950s, 1960s, 1970s and so forth.

Rosegarten says he loves making the Junk Drawers and would customize for someone on commission. “I would go to your house and if you didn’t have the elements I wanted, I would ask if I could use some of mine.”

The pieces he chooses are specific – he combs particular shops (he has his favorites for manikins in the Garment District), antique stores, flea markets, garage and barn sales, which “are entertainment in the country and have become an essential part of my new work with found objects. One day I might find a rusted scythe with a broken wooden handle; the next day a box of glass dolls’ eyes or a red View-Master. I put the material in labeled boxes and store them to be rediscovered.

“When I select objects for a new composition, I may sit with them for days, moving them around like pieces on a chessboard until they take shape. Placement and balance are key. I remove pieces; add others, balancing shadows, shapes, textures and color until I know instinctively that the work is completed: the new composition has taken on another dimension, a unity of its own and gained strength and character.”

Rosegarten, who grew up in Great Neck (he graduated high school with movie director Francis Ford Coppola), now lives “in the country” in upstate New York, in a house he built 17 years ago where he has a 30 x 30 ft studio off his bedroom that opens to a deck and pond, and a 2500- sq ft basement work area.

His collected objects are neatly organized in labeled tubs under tables – machine parts, metal parts, extra toys, manikin hands.“Everything has a place, a place for everything.”

Often, he visualizes the entire piece in his head before he starts his assemblage.

“I just finished a piece Thursday. It doesn’t have a name (or does it have a name): The Quick Brown Dog Jumps Over the Lazy Fox. Why? Because part of the visual – a box,with 2 white hands, at the top has the keyboard of a very very small typewriter –a  vertical piece, a piece at bottom, a nodule on top hands,. The sense of design is perfect. It was in my head.”

“I never went to art school, except for a month at the Art Students League, Bruce Dorfman, teaching there since early 60s – he said, push the envelope. It’s ok if off-center, if you don’t have anything there and want it to sit there.”

Indeed, it is so ironic considering that most people move to Great Neck from New York City because of the public schools, that his big regret is that when his family was still living in the Bronx, he was accepted into Music & Art, but before he could attend, his family moved to Great Neck.

He was doing painting until 1990s, then, around 2000, he went to an antique show on 6th Avenue and came upon wooden patterns which were used to make metal parts in the early 1900s. “I bought 20 of them –they were inexpensive – I didn’t know what I would do with them. I washed them off, That’s when I started.“

It fit into his overarching philosophy of reuse, repurpose, renewal – “an ability to use things that have been tossed away and have them come back and serve another purpose – Lost and Found (is what I call it). I’m not interested in what is sold in dollar store but things that have age, patina, character. Snapshot” is built around an antique folded camera and tractor parts.

“I take individual pieces that by themselves are utilitarian and they become a “body” – a personality. Each has its own personality.”

The exhibit also includes Rosegarten’s paintings, which have the look and vibe of Pop. “Just as I have reinvented myself a number of times in the past 30 years, so too has my art undergone a metamorphosis. Over the last ten years, it has moved from post-Pop paintings to a more muscular sculptural medium, where form and design take precedence over color.”

Regina Gil, Founder/Executive Director of the Arts Center, writes in her introduction to the catalog:

“In this latest chapter of his creative life, RJ Rosegarten draws upon the rich fabric of his imagination, strong art and design skills, and solid knowledge of carpentry that lets him execute what he already sees in his mind fully formed. And the results are impressive.

“Here is a man who grew up in a small town, absorbing all the qualities of civics, ethics, and community values that one associates with such an upbringing. He married young, had three sons and led the life of the American Dream. He even went on to work in the advertising world; that fabled Madison Avenue bastion of the creative idea sellers; but not as an artist, as a ‘suit’. So, without knowing it, he was adding to his arsenal of skills by including leadership, salesmanship, and public speaking to his repertoire. But he was fascinated by and engaged with the artists and designers.

“When he left advertising, he became a beloved and respected mayor of that same town, bringing his love of the town and business acumen to the job. He demonstrated that the world of politics and government were new fields on which he could impose his creative eye. As a result, the town grew and he was elected and re-elected time and again.

“It was only when he left the town again, retiring from public life that he began to fully realize his longtime dream of being an artist in his own right. And he is an artist in the fullest sense of the word. Not only are his technical skills the very best; but his thoughts, ideas and vision are on display, inviting the viewer to enter his carefully constructed world; challenging the viewer to understand his point of view, to embrace it or to disagree.  A lifetime of thinking and living, of humor and wit, of deep, serious emotion and also of playfulness; the full range of the human experience in a construction of wood and found objects.

“As a longtime friend, I am delighted to see RJ ‘Bob’ Rosegarten come home to Great Neck. Without his friendship and assistance, mentoring another dreamer through the shoals of politics, fundraising, and community engagement, it is doubtful that this Gold Coast Arts Center could have found its home here. It seems fitting that we honor him with this exhibit that introduces the people he served as mayor to the man he is now —  the artist.”