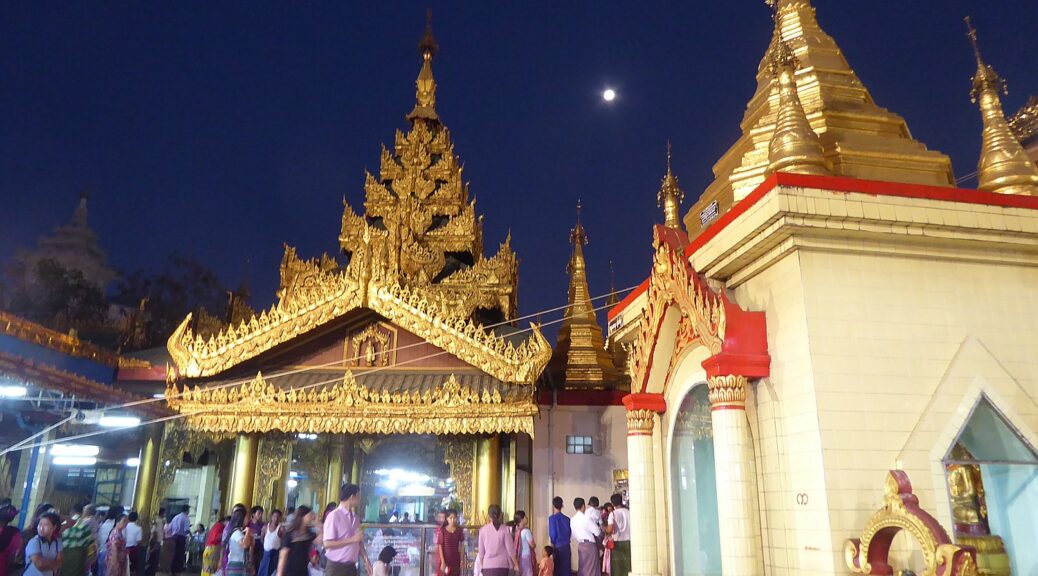 It is only a two-hour flight from Ho Chi Minh City, Vietnam, to Yangon (formerly known as Rangoon), Myanmar, the third leg of the Global Scavenger Hunt, a 23-day around-the-world mystery tour. We arrive at our five-star hotel, the Sule Shangri-la, around noon. We will have our meeting at 2:30 pm when we will get our booklets, spelling out the challenges we will face in the Golden Land.

After 60 years closed to the world, Myanmar, formerly known as Burma, was only reopened to the outside world in 2011, so I am most intrigued to see it for myself. The country has also received horrible press over the persecution of the Rohingya people, which raises controversy for Bill Chalmers, who meticulously organizes the Global Scavenger Hunt. But it encapsulates his philosophy, bordering on religion, that appreciates travel as a way of forging understanding, bringing people together and yes, fostering progress and change.

Throughout this Global Scavenger Hunt, “A Blind Date With the World” – where we don’t know where we are going next until we are told when to go to the airport or get ourselves there, and along the way, complete scavenges and challenges – we are encouraged, even forced, to “rely on the kindness of strangers,” to interact with local people even when we can’t understand each other’s language. (Towards this end, using cell phones or computers to research, access maps or GPS is not allowed.)

Though it is a conceit to think we can parachute into places and understand the nuances of complex issues, travel is about seeing for yourself, but also gaining an understanding of one another, disabusing stereotypes or caricatures, and most significantly, not seeing others as “other”, which works both ways.

In very real ways, travelers are ambassadors, no less than diplomats. Isolating people is not how change happens – that only hardens views and makes people susceptible to fear-mongering and all the bad things that have happened throughout human history as a result. “See for yourself,” Chalmers tells us.

Chalmers offers this to ponder: The point of a travel boycott is to force a government to reform their ways (corruption, human rights, democracy and such) is based on the concept that tourism income mostly goes into the hands of government, not the people, so enables their power and policy. But others believe that tourism is not only economically helpful to locals, giving them the means to improve their living conditions, but vital to pro-democracy, humanitarian movements because of the two-way flow of information.

On balance, Chalmers tells us, “I don’t like the idea of a boycott. Travelers are serving as ambassadors, doing fact-finding.  This country is emerging from decades of isolation – there are problems, humanitarian problems on a large scale. It is a troubled country with great suffering.

“Bear witness for yourself. Enjoy the rich culture, the people, play journalist, bea  reporter, have conversations, learn and gain perspective. Parachuting in can’t give you full expertise. All acquire more accurate idea, local perception. Talk with locals, see for yourself.

“The issue with not coming is you paint a broad picture about everyone. When we travel, a lot of people disagree with our government but don’t take it out against us as individuals. We practice diplomacy of engagement. Not coming won’t change minds but possibly, coming can help change minds.” I contemplate that point: imagine if the people we meet as we go around the world held us personally responsible for caging migrant children and keeping parents separated in conditions that wouldn’t meet the Geneva Conventions requirements for POWs.

“Myanmar is breathtakingly beautiful,” Bill tells us. “Say yes to things. There are extraordinary sights.” But he isn’t naïve. Anticipating the problems, frustrations we will have, he gives us a list of to-do’s and don’ts (buy food and water before getting on a train, ferry or bus; Myanmar roads are among the most dangerous;  have a safe word between teammates that is code for “danger.” Travel, he says, is about “conquering fears, heat, holidays.” Indeed, the fact it is Myanmar’s New Year’s Day and many services are closed becomes a major issue for me.

The Global Scavenger Hunt is also about teamwork, and one of the rules is that you can’t separate from your teammate (Chalmers actually feels very guilty about the possible friction the competition can foment in couples). So, though we are not officially competing for points, I go along with my teammate, Margo, who wants to travel to Mandalay instead of Inle Lake, which I become extremely excited to see after hearing about this enchanting place, after visiting the temple city of Bagan.

We learn that the Myanmar leg is designated a Par 5 (very tough, the highest is Par 6). The challenge we are given is to spend the next two nights on our own, that we have to go to two of the three cities (Yangon, Bagan, Mandalay and Inle Lake), but can only take two flights (necessitating ground transportation between two cities of the triangle) and have to be back to The Sule Shangri-la in Yangon by 6 pm on Saturday. Chalmers spends much of the time spelling out the special rules for this leg of the contest, the winner of which is designated “World’s Greatest Traveler”.

“Today the real travel test will begin. Our teams collective travel savvy and travel IQ will be tested here in Myanmar… in this daunting, breathtaking, frustrating, exhilarating haunting, sacred, dynamic, traditional, thrilling, rapidly changing (and I could go on and on) destination! It will be an interesting four days. Have fun and be safe folks,” Chalmers writes on the Global Scavenger Hunt blog.

We spend the next 3 1//2 hours organizing where and how we will travel to Bagan, Mandalay and back to Yangon. Under the rules of the contest, we are not allowed to use our own computers or phones to book flights or hotels, or even the hotel concierge, but have to go out and find a travel agent. That proves problematic because of the holiday, but Kim says that a fellow on the street has told her where there is a travel agency. Sure enough, he is waiting for us on the street (internal warning light goes off) to walk us down dinghy alleys to the agency which looks and smells like a hovel.  Another team is already there, handing over a wad of cash, since the agency isn’t accepting a credit card (ostensibly because of the holiday). I get nervous and suggest we leave, and make the bookings on our own (since we are not competing, we can use our computers). But this proves an interesting experience.

By the time we finish, I only have time to walk down a modern boulevard to the Sule Pagoda, which sits at the center of the city as well as the city’s political and economic life.

According to legend, the stupa was built even before the more famous Shwedagon Pagoda during the time of the Buddha, which would make it more than 2,600 years old. The Sule Pagoda served as a rallying point in both the 1988 uprisings and the 2007 Saffron Revolution.

It’s the last day of the New Year celebration and place is packed with people bringing offerings, lighting candles and spilling water at their Weekday shrine. It is dusk when I arrive, and I watch the moon rise and the sky deepen in color to azure blue, the brilliant gold of the pagoda a blazing contrast. A guide immediately comes up to me to offer to take me around and checks his book to see exactly what day of the week I was born, so I know which is my shrine (Thursday is my shrine; the mouse is my animal); he shows me a photo of President Obama striking one of the bells during his visit here.

On the way back, I walk across a bridge that spans the boulevard for a sensational photo of the pagoda.

I have yet to see the famous Shwedagon Pagoda. Fortunately, I will have more time to explore Yangon when we return on Saturday.

We are up at 4 am to leave at 5 am for the airport for a 7 am flight to Bagan on Golden Airlines. The hotel has very kindly packed a to-go breakfast. It turns out several of us are going on the same flight to Bagan.

This morning in clearer light, having become entranced by the description of Inle Lake, a villages built on stilts and only accessible by boat, and hearing one team discuss the overnight bus they will take from Bagan to Inle Lake, I decide to go on my own to Inle Lake instead of to Mandalay. But that depends on whether I can get seat on all-night bus, a hotel in Inle Lake and a flight from Inle Lake on Saturday morning to be back in time for the 6 pm meeting/deadline.

I plan on seeing more of Yangon when I return.

More travel information is at http://myanmartravelinformation.com/top-destinations/yangon.html.

The Global Scavenger Hunt is an annual travel program that has been operated for the past 15 years by Bill and Pamela Chalmers, GreatEscape Adventures, 310-281-7809, GlobalScavengerHunt.com.