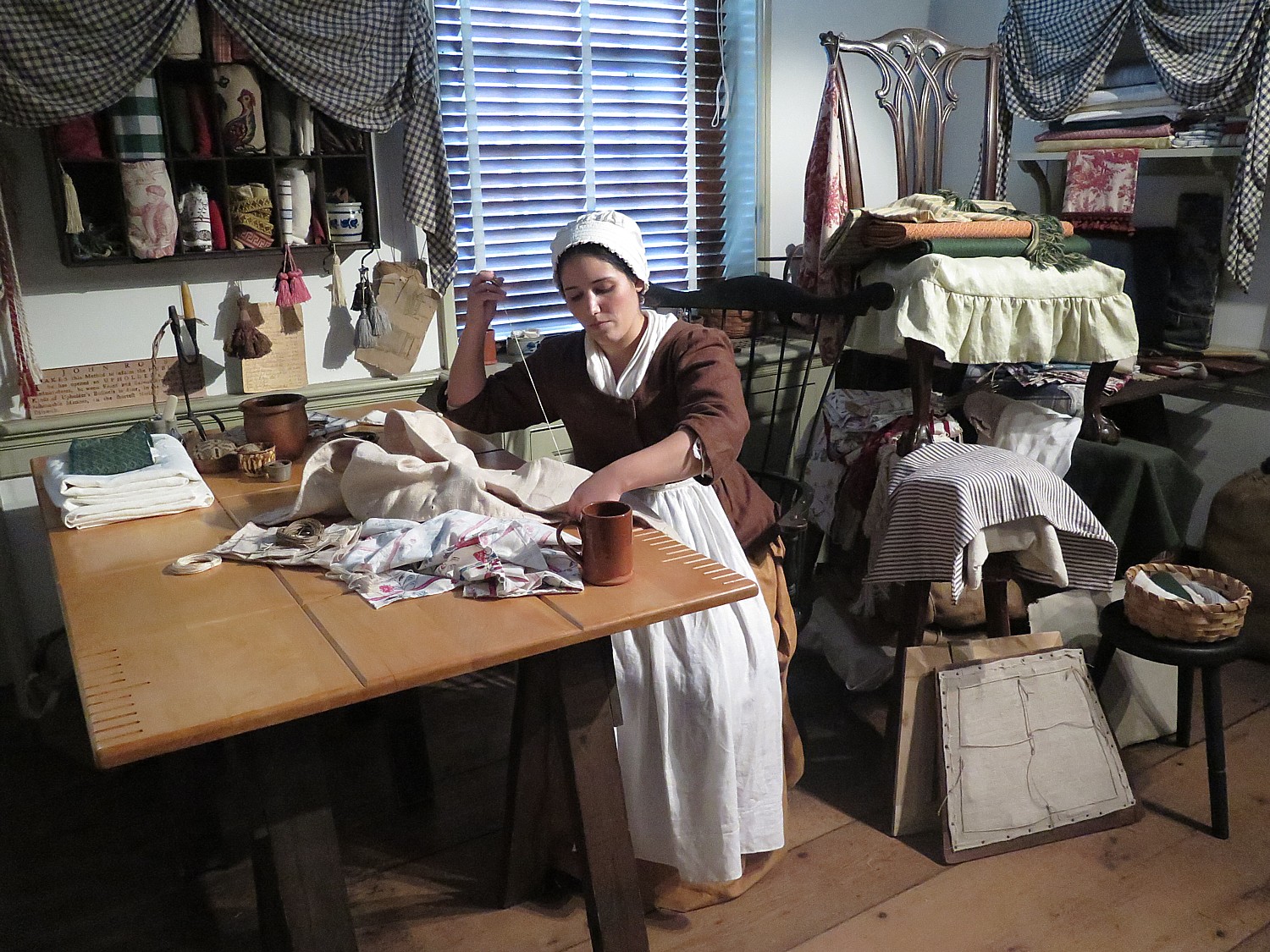 My third day of my deep-dive into Revolutionary War America in Philadelphia is devoted to exploring key figures and sites that I have never visited before: Benjamin Franklin Museum, the Betsy Ross House and the National Constitution Center. I especially appreciate what I am seeing after my visits to the newly opened Museum of the American Revolution and the National Museum of Jewish American History in the first two days.

Betsy Ross was a pistol.

I realize that all I know of Betsy Ross is that she created the first American flag. But this museum, which is operated as a private, nonprofit attraction, really conveys what a significant figure she was – independent when few women had any independence at all, a true patriot who was courageous in working on behalf of the Revolution. And, like Ben Franklin, what a modern person she was, who I can believe, would have been at the front of the Women’s Marches waving a feminist flag of her own design.

Her story would be worthy of a drama: She was shunned by her Quaker family for eloping (at age 21) with John Ross, a man of a different faith (the son of an Anglican Reverend) – imagine running off and marrying for love in 1773. She was independent: soon after they were married, John, who had joined the local militia, was killed and she found herself a widow who had to fend for herself. Because they had no children, she was able to keep her property. She rented a room in this townhouse, as well as a shop on the street level where she had her own business sewing upholstery and throughout her life was a savvy businessperson.

She would have known General George Washington from Christ Church which the young couple attended.

You traipse through the small house – to the room she rented in what was a boarding house (not just women), and realize how unusual this is, and then, as you descend the stairs into the shop, much to my surprise, you meet Betsy Ross herself, sewing some fabric. You get to ask her questions about her life.

I ask her what the date is – Nov. 5, 1776 – and really get into the spirit of the thing, knowing that she will only answer questions up to that point, when I know what comes next.

She has been working on the flag in secret, upstairs in the room, where she keeps it hidden under fabric.

Why did she take the risk? “My late husband was a patriot. I wanted to support Washington and make something to allow the spirit of my late husband live. We never had a child. [Creating the flag] this was like giving birth.”

She said that she went from father’s house to her husband’s. Now 24 years old, “the heaviness of a loss forces you to grow up in different manner. Being on my own is more difficult than I would have imagined.”

Her husband, John, passed in January and she moved in March. “This is the Widow Lithgow’s home –she rents to individuals. I rent a room and shop space from her. If I remarry, I will go to different lodging.”

She relates how General Washington had particular design in mind when he came to her in 1776. He was open to suggestions: his original idea for the symbol for American independence had the shape of square rather than rectangle (that was her idea).

Also, Washington had wanted six-pointed stars but Ross pushed to change the shape to five-pointed stars by demonstrating that it was easier and speedier to cut, and how she would sew it in so that the design could be seen on both sides.

She tells me with an appropriate measure of sass in her tone that a trusted messenger brought her flag  to Washington rather than he come himself. “He has heavier things on his mind – to win the battle, not a flag.”

I never considered, before “meeting” Betsy Ross how courageous she was to make the flag – she could have been caught and jailed for sedition.

I ask if she has met Ben Franklin (thinking that his printing shop is nearby), but she says that she knows of him but has not met him. “He’s out of town a lot. I hear he is quite taken with squirrels,” she says with a slight smile as she continues to sew.

She actually had a very good business going during the American Revolutionary War, making flags for the Pennsylvania Navy.

Betsy Ross was born in 1752, and after attending a Quaker-run school, her father apprenticed her to an upholsterer. There, she fell in love with John Ross, a fellow apprentice, the son of an Anglican priest at the historic city parish of Christ Church, and the nephew of George Ross Jr. who was a signer of the Declaration of the Independence. The young couple eloped in 1773 when she was 21, marrying at Hugg’s Tavern in Gloucester City, New Jersey. The marriage resulted in her expulsion from the Quaker congregation.

The young couple soon started their own upholstery business and later joined Christ Church, where their fellow congregants occasionally included the visiting Virginia Colony militia regimental commander who would soon become General of a newly organized Continental Army, George Washington, as well as other visiting notaries and delegates who would become leaders of the rebellion and later, members of the Continental Congress.

They were married only two years when John Ross, a member of the local militia, was killed. They had no children.

She continued working in her upholstery business for the Revolution, repairing uniforms and making tents, blankets, and stuffing paper tube cartridges with musket balls for ammunition for the Continental Army.

On June 15, 1777, she married her second husband, Joseph Ashburn, a seaman. In 1780, Ashburn’s ship was captured by a Royal Navy frigate and he was charged with treason (for being of British ancestry, because the British did not recognize American colonial citizenship) and was imprisoned at Old Mill Prison in England. During this time, their first daughter, Zilla, died at the age of nine months and their second daughter, Eliza, was born. Ashburn died in the British jail.

Three years later, in May 1783, she married John Claypoole, who had coincidentally met Joseph Ashburn in the English Old Mill Prison and had been the one to inform her of her husband’s death. (Ross must have really been something, and the young woman playing the part today conveys that spirit.)

Betsy gave birth to five daughters with John Claypoole: Clarissa, Susanna, Jane, Rachel and Harriet (who died in infancy). With the birth of their second daughter, in 1786, they moved to a larger house on Philadelphia’s Second Street, settling down to a peaceful post-war existence.  Philadelphia prospered as the temporary national capital (1790–1800) of the newly independent United States of America, with George Washington as the first President,

By 1812, John Claypoole’s war injuries had left him disabled; he died in 1817 after two decades of poor health. Betsy’s young, widowed daughter Clarissa moved into their home with her five children and a sixth on the way. With Clarissa’s help, Betsy continued to run her upholstery shop and flag-making business. But after 50 years in the trade, Betsy’s rapidly failing vision led to her retirement at the age of 76. Betsy eventually became blind. She spent the last three years of her life living with her daughter Jane’s family on Cherry Street in Philadelphia. She died peacefully in her sleep on January 30, 1836, at the age of 84.

Betsy Ross’s body was first interred at the Free Quaker burial grounds on North Fifth Street in Philadelphia (interesting in that the Quaker’s shunned her); 20 years later, her remains were moved to the Mt. Moriah Cemetery in Philadelphia. Then, in 1975, in preparation for the American Bicentennial, the City ordered the remains moved to the courtyard of the Betsy Ross House. Cemetery workers found no remains beneath her tombstone, but bones found elsewhere in the family plot were deemed to be hers and were re-interred in the grave which we tourists visit at the Betsy Ross House.

The museum does an excellent job of revealing the situation of women in Revolutionary times, what it was like for the women and children left behind when their men went to war, and how they provided for themselves when they were widowed. I go down to the kitchen area where another woman interprets what it would have been like to have been a Washerwoman – one of the few professions that a woman who had to fend for herself could undertake.

“Working as a laundress was a difficult, low paying job in the 18th century; in early colonial period, many were enslaved or indentured servants; toward the end of the 18th century, most were free black women and widows struggling to support themselves.”

We are introduced to Judath, an African American washerwoman employed by Elizabeth Drinker, a wealthy Quaker woman. Jane Gray, a widowed African American washerwoman, who was a member of the “Black Class” at St. George’s Methodist church and later joined St. Thomas’ African Episcopal church. Susanna Cook, a widow with two children who lived at 3rd & Walnut Streets, whose husband died in the Yellow Fever epidemic of 1793 and to earn a living, rented out rooms and worked as a washerwoman earning $3 a week; she fell ill in 1801 and died impoverished in an almshouse.

There are special exhibits: “Stitching the Story Together: Betsy Ross and the American Flag” opens March 1; “Furnishing the Widow’s Chamber (opens March 1).

Allocate about an hour to visit.

When I leave the Betsy Ross House, I think how appropriate that other clothing/sewing places are also on this block, and just a few doors down, come upon Women’s Resistence – The Outrage (www.the-outrage.com)

The brand was started 2016 – it was supposed to be celebratory for first woman president, but instead, has become an outlet for outrage and resistance for artists and activists. A portion of sales helps benefit organizations – ACLU, Planned Parenthood, 350.org. The first store oened in DC; this one opened this fall, with other outlets planned across the country.

My immersion into Revolutionary War Americana in Philadelphia continues at the Constitution Center.

72 Hours in Philadelphia: Ben Franklin, America’s Revolutionary ‘Elder Statesman,’ Would Have been Quite at Home in 21st Century