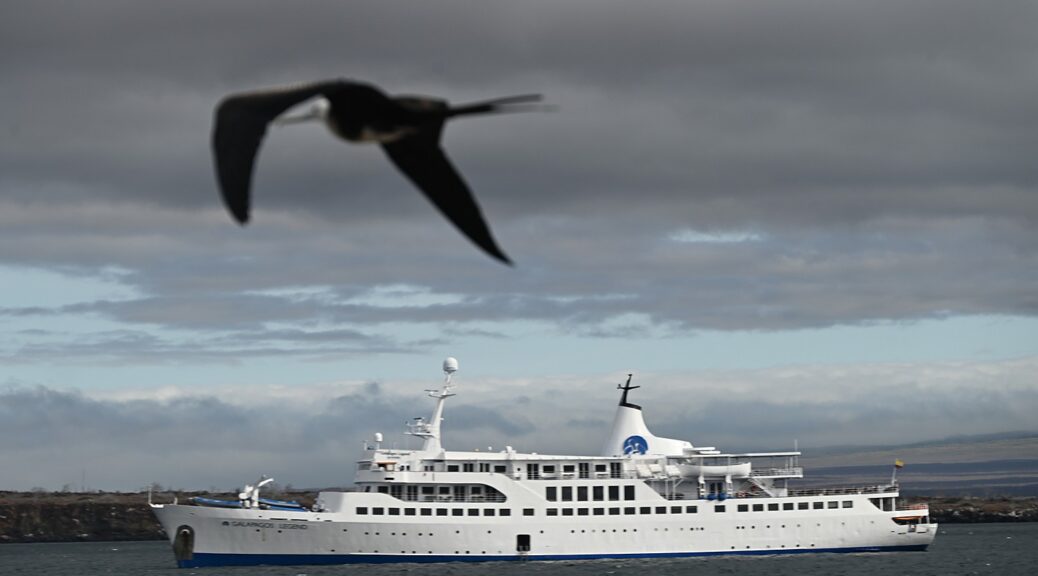 The Galapagos, an archipelago of some 200 islands spanning 8000 sq km  just below the Equator and 600 miles from South America’s coast – has the most varied ecosystems and diversity in such a concentrated area on the planet.

You see animals and floral life that don’t exist anywhere else in the world – not even from one island to the next. It’s the only place in the world you can see sea lions, penguins and albacore tuna with parrot fish, angel fish and flamingoes.

We get so close because here, animals do not have a fear of humans because humans are no longer their predators. Most profound, is how vividly we can see the impacts of the environment on the evolution of a species, right down to their blue or red booby feet and the red sac that expands like a balloon on the male frigate bird’s neck. We see mating rituals, newborn chicks, adolescence and death. We get to swim with sea turtles and sea lions.

The best way to experience the Galapagos – a place that can only be described as “enchanting,” “mesmerizing,” “awe-inspiring” – is by ship. We book a four-day/three-night cruise on the 100-passenger MV Galapagos Legend, a gorgeous ship big enough to afford all the luxury amenities you could crave and small enough to be intimate. Go Galapagos, the operator, offers four itineraries (longer itineraries are available by combining sailings) and we choose the “East” which seems to afford less time sailing (in this time of year, we are concerned about rougher seas) and more time exploring islands, hiking, snorkeling and seeing a good portion of the wildlife that the Galapagos is most famous for.

Each of the destinations we visit is so different – in landscape, geology, wildlife, vegetation – that the experience we have changes drastically from morning to afternoon and day to day.

This Galapagos cruise proves to be the perfect combination of pure excitement and pure enjoyment. It is the very definition of “soft adventure” – giving us the ability to experience something really exotic, unique, remote and isolated, but in absolute comfort, adding the priceless dimension of being an experience that can be shared by a family, young and old.

After spending a couple of days on Santa Cruz island, we meet up with the rest of our cruise passengers for this sailing of the Galapagos Legend at the international airport on the adjacent island (a US Naval Base in World War II), and are taken by bus to a small marina where we are tendered by dinghy to the ship.

It is still morning when we go aboard for a “captain’s welcome” have an excellent orientation to the ship and the cruise, and then have lunch as the ship sails to the first island we explore. (A short, easy sail, it gives us time to acclimate.)

We have two naturalists on board, Alejandro and Billy, rangers who work for the Galapagos National Park. They not only guide us, but are responsible for making sure the strict rules that protect the ecosystems are enforced. (You can’t visit the islands on your own, and even the operators and cruise ships are limited in the number of people that can be anywhere at any one time.)

The Galapagos became Ecuador’s first national park in 1959 and began operations in 1968, with tourism really getting underway in the 1970s. In 1979, UNESCO declared the Galápagos Islands a Natural Heritage for Humanity site, making the Park Service responsible for guarding and conserving the islands.

Alejandro tells us the rules that are in place to protect the animals, too many of which have been endangered by invasive species including rats, cats, dogs and most significantly, humans.

We are instructed to stay on the marked trails and not stray or go off on our own, not to bring any food (water is okay), not to use the camera flash (light is too strong and would stress the animal) or selfie stick. We must not take anything from the island, not a shell, not sand nor stone. “Keep it as natural as possible, with the least human impact, so we have this for future generations.” But the Galapagos already has clear examples of how fast human impact can set into motion the extinction of species.

The mystery is how these animals even came here to begin with. They are said to have evolved from animals that managed to get here from North and South America – but the most eastern island, San Cristobal, is still 600 miles from South America’s coast. They tell us how an iguana could have floated here on some sort of “raft”-like vehicle, which Karen comprehends about as well as the “Big Bang” theory of the universe exploding from a ball of matter that could fit in the palm of your hand.

(Think of it: an iguana would have to survive weeks at sea with swells and storms without food or water, arrive on an island and somehow meet a fertile animal of the opposite sex in a timely way in order to reproduce. It sounds about as credible as Adam and Eve in the Garden of Eden having two sons but being the progenitors of all humankind. After Billy later explains about teutonic plates that move 2 meters a year, west to east, and how these islands actually floated here, Karen is more inclined to think that these animals’ evolutionary ancestors were already onboard.)

The oldest islands are in the East (San Cristobal) and are 3 million years old; the youngest islands are in the west and are one million years old, and actually moving eastward at a rate of two meters a year. But, Billy tells us, an island would “disappear” before it reached South America’s coast (!!??). (Actually, Karen thinks the island would more likely disappear – and sooner – because of climate-caused sea-level rise, which makes her worry about the fate of these animals.)

Our first walkabout is that afternoon, on the island of North Seymour, a bird lover’s dream. The dinghy takes us to a “dry” landing which means we step onto slick rocks (they put down a towel to make it easier). We spend about two-hours (is it that long? Time flies by) walking a rocky – but easy – trail that makes us feel like we are strolling through Wonderland.

Because humans are not perceived as a threat, the animals pay us no attention. We can walk amazingly close to bird colonies, even to chicks still in the nest, as if we were invisible; they just continue doing what they will do. And yet, we later have experiences where it seems the sea lions do want to attract our attention, show off and even play with us, and on one occasion, a blue-footed booby (adolescent?) seems curious enough to just stand in the middle of the trail as we take photos, study us, and wait for us until we come back.

“Two things make Galapagos unique,” our guide, Billy, tells us. “Fear doesn’t exist and there is harmony – the hawk, boobies, iguana live in harmony [balance] because there is enough food to eat.” He tells us that the government gave fishermen an incentive to become guides, so there is less fishing and more for the animals. “Harmony and no fear.”

North Seymour is fantastic because we see several of the birds the Galapagos are so famous for– the blue-footed booby, the magnificent frigatebird (the largest colony in the Galapagos is here), swallow-tailed gulls; also land iguana (2500 are resident here). And we see them all!  It is thrilling for us to see a blue-footed booby for real (the males use their webbed feet to attract a prospective mate, but when we go to San Cristobal, we see the red-footed booby, where red proved more enticing).

We also see boxes used to trap the rats (that came with humans) that were endangering the rest of the native species.

We get to see the great frigatebird males courting the females by clicking, bill-clapping shuddering and flapping their wings, while puffing up their bright red, gular pouch, as big as a balloon. Billy tells us it’s late in the season, so this is their last chance to mate.

We see frigatebird chicks in all stages of development. Billy tells us that the female lays only one at a time, and one of the two parents have to cover it or it will die from the heat, while the other goes fishing. When it hatches, if the parent doesn’t feed it, it will die. The parent is also responsible for cleaning the chick. “The very young need more protection than food, the older ones need more food than protection.”

We see a blue-footed booby chick in the nest. Billy tells us that the female lays 3 eggs, 12 days apart, so they hatch at different times after 28 days of incubation. The oldest is the largest and takes food first so has a 100 percent chance of survival; the second is smaller, so can’t outdo the eldest for food, and has a 50 percent chance; the third is the smallest, and has only a 25 percent chance of surviving. If there is enough food, all will survive. “In the nest, there is natural selection for the strongest and fittest.”

We also see death – a dead booby chick. Billy tells us that if he sees a booby chick fall out of the nest, the ranger isn’t allowed to help it and it will die. “It means the chick has a balance problem, and if it mates and reproduces, that trait will be inherited and would be the result of the ranger’s mistake. That individual should die before it reproduces. That’s natural selection.”

When you are here, you realize what an ecosystem is – the cooperation and competition that is required for survival.

We come upon a land iguana (they survived here but went extinct on Baltra), which is unfazed as groups of us stand over it. I’m fascinated by its delicately formed hands and feet that look so human, and yet, this isn’t just a different species but a different genus, reptilian.

There aren’t any hummingbirds here, Billy says, because there isn’t the kind of vegetation that hummingbirds require – a lesson that “Prey and predators have to colonize together or one or the other disappears.”

The humans who began arriving in the Galapagos in the 17th century were predators also, engaged in the fight for their own survival. Without food or fresh water, they relied on giant sea turtles and tortoises. “They could survive for 6 months with meat and water from a sea turtle –the turtle was their supermarket for hundreds of years.”

Next: Our Voyage on the Galapagos Legend Continues to Santiago

CRUISING ON THE GALAPAGOS LEGEND: A VOYAGE OF WONDER