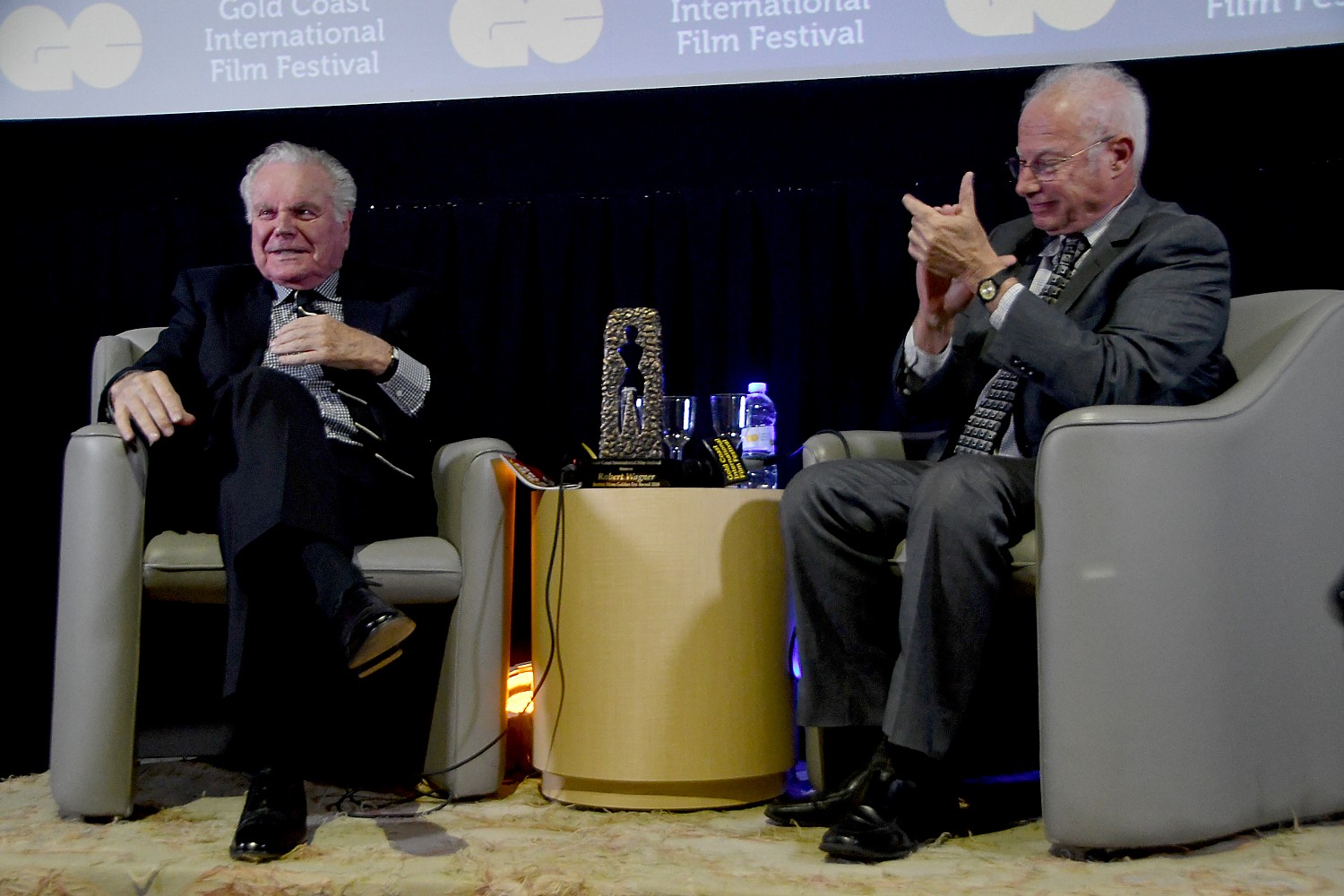 The stars shone over the Gold Coast Arts Center in Great Neck, Long Island as film and television star Robert Wagner was honored with the second annual Burton Moss Hollywood Golden Era Award in recognition of his long, illustrious career that began in 1950 with his film debut in The Happy Years.  The award was presented at the center’s annual gala which also helped raise funds for the nonprofit Arts Center and its Gold Coast International Film Festival, which starts on Friday, November 2, 2018 on the storied Gold Coast of Nassau County’s North Shore, once home to entertainment legends including W. C. Fields, Paulette Goddard, Oscar Hammerstein, Alan King, Francis Ford Coppola, George Segal, and F. Scott Fitzgerald.

Joining Wagner at the gala were such luminaries as his wife, actress Jill St. John; his daughter Courtney Wagner, who co-hosts Boulevard, their new cable program about the movie stars of Hollywood; actress Sharon Gless (Cagney and Lacey) and her husband, producer Barney Rosenzweig; and Princess Yasmin Aga Khan, whose mother, the late Rita Hayworth, posthumously received the first Burton Moss Hollywood Golden Era Award in 2017.

Iconic talent agent, Budd Burton Moss, the award’s namesake, also attended the event in tribute to his childhood friend.  Moss, the most respected and admired talent agent of Hollywood’s Golden Age, attended elementary school in California with Wagner, forging a relationship that has endured since.

Actress Diane Baker and noted radio and television personality Larry King sent along their best wishes via video. Also in attendance were Harriet Fields, granddaughter of the late W.C. Fields, and renowned film historian and film professor, Foster Hirsch, who moderated a candid, lively and informative discussion with Wagner before the presentation of the award.

Wagner may well hold the record for longest continuous career – he has been acting for 70 years, a fact acknowledged by tributes from Larry King and actor Diane Baker.

During the conversation with Hirsch, Wagner spoke of his mentors, who bolstered his career: actor Spencer Tracy, who “changed my life,” and film producer Darryl Zanuck, who basically discovered him, developed him and said of him, “You will be a big star.”

Clark Gable got him a screen test at MGM, but that didn’t work out, and got a contract with 20th Century Fox ($55 a week), where he stayed for 20 years, a part of the studio system.

“The studio system worked well for me. People at 20th Century Fox looked out for their people.”  His departure coincided with the collapse of the studio system.

“I owe my career to Darryl Zanuck,” he said. “He knew scripts, stories, believed in the people around him. He really cared about me.. Darryl was watching me. When he left [the studio], it was a different situation.”

He joked that he wasn’t happy doing “Prince Valiant,” revolutionary for being one of the first movies filmed in Cinemascope. “It was the wig – it got in the way. Dean Martin talked to me for 10 minutes; he thought I was Jane Wyman.”

He reflected on his transition from film to television – something that wasn’t done at the time. “Lou Wasserman said to me, ‘I want you in this magazine – TV Guide. I think this medium is for you.” Wasserman proposed making a pilot for “It Takes a Thief,” and promised that if it wasn’t picked up, he would make it into a movie. It wasn’t picked up; he made the movie, and then it was picked up.”

“It started mid-season,” Wagner related. “That’s death. I thought my career was gone. But the audience liked it.”

Fred Astaire was his co-star. “There was nobody like him. A meticulous man. I asked him to play my father. I knew him when I was a kid – I went to boarding school with his son. Who asked me over for the weekend at his house. Astaire picked me up, put me in the back seat of his convertible – I was 7 or 8 years old. I didn’t know who Astaire was at the time. I spent a lot of time with him over the years.”

Hirsch pressed him on how his mentors seemed to all be father figures because his own father was “rather difficult.”

“My father was a product of that era. He did things his way. I was programmed to go into his business – steel. I always wanted to be actor in movies, from time I saw my first movie.”

He spoke of the many “marvelous leading ladies” he worked with: Audrey Hepburn, Sophia Loren, Bette Davis, Elizabeth Taylor, to list but a few,” writing about them in his book, “I Loved Her in the Movies,” one of three Hollywood memoirs he has published.

“You can’t be a leading man without a leading lady.”

And he spoke lovingly and admiringly of his wife, the actress Natalie Wood, whose real name was Natalia Nikolaevna Zakharenko, a child of Russian immigrants. She made her debut before she was five years old in a 15-second scene in the 1943 film, “Happy Land,” and at the age of seven, played a German orphan opposite Orson Welles and Claudette Colbert in “Tomorrow is Forever” (1946).

“They dyed her hair blond and taught her a German accent… She had God-given talent.”

He said that he doesn’t believe “West Side Story” would have been made without Wood. “She was so good at accents. She was good at everything.”

In the audience was his wife, Jill St. John, “the first Bond girl,” with whom he performed “Love Letters” on the stage, criss-crossing the country for nine years.

“The performances had to be different, otherwise they would have had to take me away with a net. We had to keep it different.”

Wagner’s numerous film credits includes With a Song in My Heart, Broken Lance with the legendary Spencer Tracy, Dragon: The Bruce Lee Story, The Pink Panther, The Curse of the Pink Panther, Midway, The Towering Inferno, Banning, Harper, Prince Valiant, The True Story of Jesse James, and All the Fine Young Cannibals. He re-created his role of Number Two, the villainous henchman to Dr. Evil, the archenemy of Mike Myers’ title character in Austin Powers: The Spy Who Shagged Me.

On television, Wagner has starred in three long-running hit series, It Takes a Thief, with Fred Astaire, Switch, with Eddie Albert and Sharon Gless and Hart to Hart, with Stefanie Powers.  He also starred in the top-rated miniseries Windmills of the Gods, based on Sidney Sheldon’s best-selling novel; with Joanne Woodward in A Kiss Before Dying; and with Elizabeth Taylor in There Must Be a Pony. He also appeared in the memorable Seinfeld episode, “The Yada, Yada, Yada,” as Dr. Abbot.

Named for the man who has represented some of Hollywood’s finest stars, the Burton Moss Hollywood Golden Era Award pays tribute to film legends who may not have been honored adequately during their lifetimes, and whose names and legacy are in danger of becoming forgotten by newer generations of filmgoers.  The award itself, an original work of art, was created by celebrated sculptor Edwina Sandys, who also attended the event, is a granddaughter of Sir Winston Churchill.

Presenting the award to Wagner, Princess Yasmin Aga Khan, who had received the first award on behalf of her mother, Rita Hayworth, said she had devoted her life as a spokesperson for the Alzheimer’s Association, working for a cure, andnoted that among the many programs offered at the Gold Coast Arts Center (programs “from womb to tomb” in art, music, performance) are Making Memories a program that serves those with Alzheimer’s and memory impairment.

Proceeds from the benefit support the Arts Center’s outreach projects including Making Memories, as well as ArtReach, a program that brings Arts Center faculty and programs to underserved schoolchildren and others, to enrich their curriculum with arts education in the areas of ceramics, painting, music, dance, and chess.

The Gold Coast Arts Center is a 501(c)(3) organization dedicated to promoting the arts through education, exhibition, performance, and outreach. Located on the North Shore of Long Island, it has brought the arts to tens of thousands of people throughout the region for over 20 years. Among the Center’s offerings are its School for the Arts, which holds year-round classes in visual and performing arts for students of all ages and abilities; a free public art gallery; a concert and lecture series; film screenings and discussions; the annual Gold Coast International Film Festival; and initiatives that focus on senior citizens and underserved communities. These initiatives include artist residencies, after-school programs, school assemblies, teacher-training workshops, and parent-child workshops. The Gold Coast Arts Center is an affiliate of the John F. Kennedy Center for the Performing Arts Partners in Education program, and the National Gallery of Art in Washington, D.C. More information can be found at www.goldcoastarts.org.