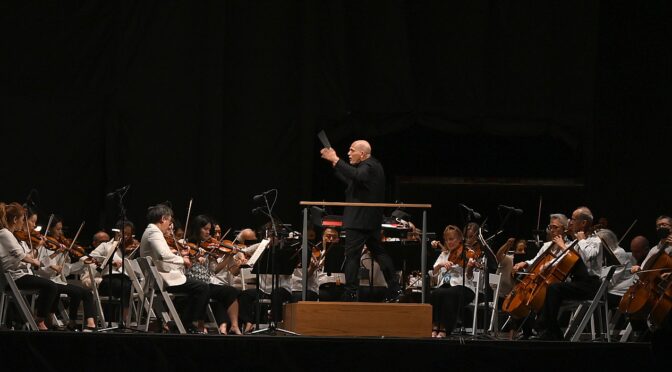 The 2022 New York Philharmonic Concerts in the Parks, Presented by Didi and Oscar Schafer, made a triumphant return to Central Park on Wednesday, June 15, marking the return of the beloved series following two years of cancellations due to the pandemic. It was the second of four free outdoor concerts conducted by Music Director Jaap van Zweden – the first had taken place at Van Cortlandt Park, Bronx on June 14, followed by Cunningham Park, Queens (June 16); and Prospect Park, Brooklyn (June 17). All four outdoor performances conclude with a fireworks display.

The stunning program includes Wagner’s Prelude to Act I of Die Meistersinger von Nürnberg, Bruch’s Violin Concerto No. 1 with a masterful performance by Bomsori Kim as soloist, Dvořák’s Symphony No. 7, and works by New York Philharmonic Very Young Composers: 14- year-old Naama Rolnick’s Keep Walking, who wrote her sensational piece at the age of 10 and who flew in from her home in Israel to enjoy hearing it played by the New York Philharmonic, and 17-year-old Alexander Rothschild Douaihy’s thrilling “A Human Rhapsody,’ which he composed at the age of 15.

In addition, Musicians from the New York Philharmonic are perform inga Free Indoor Concert, on Sunday, June 19, 2022, at 4 p.m., at St. George Theatre in Staten Island. (Tickets are free but required.)

“Like so many New Yorkers, Didi and I missed tremendously the Concerts in the Parks these past two summers,” said Philharmonic Chairman Emeritus Oscar S. Schafer. “We love the parks, and we love this orchestra, so we’ve been eagerly awaiting their return. We look forward to seeing people come together in these beautiful parks across the boroughs to enjoy magnificent music performed by this virtuosic orchestra. It will truly mean that New York City is back!”

“What a joy to be returning to the Parks of New York after two years of not being able to perform for the Parks’ audiences,” said Music Director Jaap van Zweden. “Music speaks to our hearts better than any language, and the New York Philharmonic players and I cannot wait to reconnect with the thousands and thousands of people throughout the Boroughs of New York who come to the Parks to hear us.”

“We are so excited to welcome back the New York Philharmonic for the iconic Concerts in the Parks series!” said NYC Parks Commissioner Sue Donoghue. “This series brings together people from all backgrounds to enjoy world class music for free, in some of our most picturesque parks — this is summer in New York at its best!”

The New York Philharmonic’s free parks concerts have become an iconic New York summer experience since they began in 1965, transforming parks throughout the New York area into a patchwork of picnickers, and providing music lovers with an opportunity to enjoy “priceless music absolutely free, under the stars”. More than 15 million listeners have been delighted by the performances since their inception. All programs are subject to change.

Here are more photo highlights from the Central Park performance: