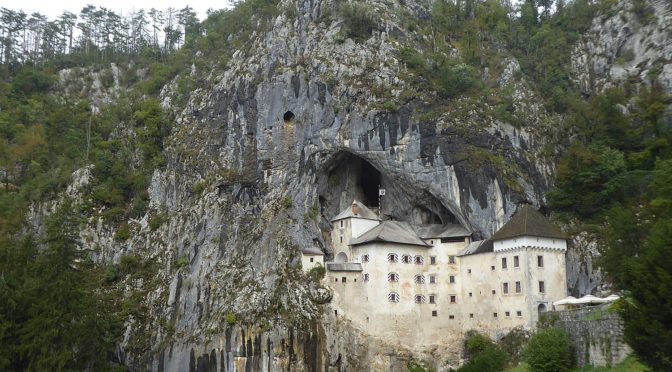 When I signed up for Biketours.com’s guided eight-day “The Emerald Tour of Slovenia’s Gems” bike tour, I was expecting sprawling landscapes and quaint villages. What I wasn’t expecting was to be surprised each day by some unique attraction. Postjana caves, Predjama Castle, Škocjan Caves, the most magnificent parts of the trip prove not to be above ground, but underground, as we experience what Slovenia’s karst (limestone) geology really means.

Our second day of biking is a bit more demanding as we cycle 36 km up and down over hills, forest roads and a “typical” karst polje (field) with intermittent rain showers. We leave the main tourist routes and ride through the Slovenian countryside, cycling passed the beautiful Slivnica Mountain and the “disappearing” lake of Planina. And if there is a theme for the day, it is about Slovenia’s remarkable natural wonders.

We stop in the Rakov Škocjan nature reserve, where the Rak River has carved out a beautiful gorge, interesting landscape formations, including two natural bridges – which proves just a teaser for what we will experience later.

Indeed, the spectacular highlight comes after we check in to our hotel, Hotel Kras. We quickly drop our things and walk up to Slovenia’s justifiably most popular tourist attraction, the Postojna Caves.

Spectacular is an understatement. Colossal only begins to describe it. Stupendous is probably closer.

The jaw-dropping Postojna Cave, the most extensive cave system in Slovenia, is a series of caverns, halls and passages some 24 km long and two million years old.

The visit begins with a spectacularly thrilling train ride that Disney would envy (but there is no warning to “keep your hands inside the car, your head down and hold on to your kids!” just a brief whistle and we’re off). The open railway car speeds us through the narrow, twisting opening more than a mile into the cave, some 120 meters below the surface and I swear, unless you were mindful, you might lose your head on a protruding rock face. Rather than a Disney ride, the image that comes to mind (no less surreal) is the frantic train ride Harry Potter takes to escape Gringots.

Then we get to walk 1.5 km through this fantastic cave system of massive halls, stunning rock formations, stalagmites, stalactites that have been carved by the Pivka River. It is impossible to imagine how the first people explored these caves – it was discovered 1818 and first opened to visitors in 1819. We walk over what is known as the “Russian Bridge,” built by World War I Russian POWs, for tourists. The scale of the halls is not to be believed.

They manage to move some 1,500 people through the caves each day on the 1 1/2-hour tour,  that ends with a peek at an aquarium containing the proteus they call a “human fish”, a mysterious creature that lives in dark pools inside the caves – just one of some 100 species that live in this netherworld.

Another thrilling rail ride whisks us 2.5 km out of the caves to the surface. (Wear a jacket, the cave is about 10 degrees Celsius, and you need appropriate foot gear.)

It is hard to imagine anything as thrilling as the Postojna caves, but this day’s attraction is also breathtaking and extraordinary.

It is foggy when we set out on what will be a 48 km biking day, but becomes sunny and cool. We take a short detour, riding 11 km (much of it uphill), before we arrive at the incredible sight of Predjama Castle, improbably built into a crevasse halfway up a 123-meter cliff-face.

The impenetrable fortress, first built in 1274 by the Patriarch of Aquileia (I was there! just a week before on the Venice-Trieste-Istria self-guided bike tour! See bit.ly/2JnF8Su) that looks down at the valley protrudes dramatically into the surrounding basin. It is claimed to be the biggest castle in the world built in a cave.

We are enthralled by the story of the vivacious and daring knight, Erasmus, the “Slovenian Robin Hood” who lived here. Erasmus of Lueg, son of the imperial governor of Trieste, Nikolaj Lueger, was lord of the castle in the 15th century and a renowned “robber baron.”

As legend has it, Erasmus riled the Habsburg Monarchy when he killed the commander of the imperial army, Marshall Pappenheim, for offending the honor of Erasmus’s deceased friend. He took refuge in the family fortress of Predjama, and, allying himself with King Mattias Corvinus, attacked Habsburg estates and towns in Carniola. This angered Holy Roman Emperor Frederick III (a Habsburg) who dispatched the governor of Trieste, Andrej Ravbar, to capture or kill Erasmus.

The enemy’s strategy was to blockade the castle and starve Erasmus out, but they didn’t realize that the castle was actually built at the mouth of a cave, linked to a network of tunnels that provided “a secret path to freedom”.

Erasmus had steady access to supplies. He would acquire freshly picked cherries which he would throw at his adversaries to taunt them.

Erasmus is revered as a hero for keeping the Austrian army at bay for a year and a day.

The self-guided audio tour you listen to as you climb through the warren of rooms, is unbelievable. and learning how Erasmus met his untimely demise (literally caught with his pants down), is worthy of Greek mythology or Hollywood.

Apparently, the weak link was the lavatory: Someone in the castle was bribed to signal when Erasmus went to the lavatory, and they launched a cannonball that killed him. (There are stone cannonballs laid out so you can get the picture)

“It was never a pleasant place to live in – cold, dark, damp but safe. There was safety but little comfort. In the Middle Ages, safety was most important.”

It is fascinating to see how the castle and the cave intertwined the natural and manmade.

What you appreciate, as the audio guide notes, is “the inventiveness of Middle Ages people.”

For example, a channel chiseled into the rock provided fresh water, which was directed to lower floors.

The ruler’s bedroom had the brightest light, and was the most pleasant and the warmest part of the castle.

We see the 16th century coat of arms of the family who lived here for 250 years.

We visit the castle chapel and the vestry and see how it overlooked the torture chamber (there are sound effects to add atmosphere).

The ceiling of the medieval Knight’s Hall was painted with ox blood and there is a small secret room where the family documents were kept safe.

I subsequently learn that after the siege and destruction of the original castle, its ruins were acquired by the Oberburg family. In 1511, the second castle, built by the Purgstall family was destroyed in an earthquake. In 1567, Archduke Charles of Austria leased the castle to Baron Philipp von Cobenzl, The castle we see today was built in 1570 in the Renaissance style, pressed up against the cliff under the original Medieval fortification.  The castle has remained in this form, virtually unchanged, to the present day.

In the 18th century, it became one of the favorite summer residences of the Cobenzl family, among them the Austrian statesman and famous art collector Philipp von Cobenzi and the diplomat Count Ludwig von Cobenzi.

The castle was inherited by Count Michael Coronini von Cronberg in 1810 and was sold to the Windischgratz family in 1846, who remained its owners until the end of world War II, when it was nationalized by the Yugoslav Communist government and turned into a museum.

It costs 37E for a combo ticket (with the Postojna cave park and castle), definitely worth it.

We bike in the countryside through small villages (“Slovenian flat “ – rolling terrain- as our guide Vlasta calls it). Quaint homes are decorated with flowers. Vlasta says that locals are in competition with each other for the best floral decorations.

Stopping for a picture of flowers that decorate houses, we find ourselves in front of a World War II memorial. Vlasta uses it as a teaching moment to explain some of the history of Slovenia and Tito: “Slovenians were against Hitler after Hitler invaded Czechoslovakia,” she tells us. “Tito broke with Stalin – allowed freer movement (things were never as bad as in Soviet Union). People could move freely, could go to Trieste to buy Western goods. There was some self-management.”

She adds, “People always wanted democracy but some say things were better under Communism. Today, there is free enterprise but there is also rising income inequality, unemployment, young people can’t get jobs or afford houses,” she says, sounding a familiar refrain. “Slovenians used to like to own their own house but mortgages were affordable; now too much. Now, you may have three generations living in the same house.”

We stop in front of one of the oldest houses to appreciate the architecture, and again, the use of flowers as decoration. At another stop, she points to a flag hoisted on top of a tree pole to signify a marriage.

We stop for lunch at a delightful restaurant, where we eat at tables outside, under a walnut tree – Vlasta says women used to take the black for hair dye and to make schnapps (“Of course, Slovenians make everything into schnapps”). The restaurant has page after page of items with truffles; I enjoy the fish soup immensely.

Riding through vineyards, we meet a woman biking with her two children whose family owns these 500 Riesling vines. She tells us that the family comes together to pick the grapes – it takes 4 hours – and produce 600 liters of wine.

We arrive at a charming guest house, Hisa posebne sorte, in Stanjel, at 4 pm, having biked 44 km for the day.

The guest house was built 1991, a modern representation of karst architecture using old stones. The cellar, which serves as the restaurant, is a large open arch, absolutely gorgeous, decorated with their daughter’s sculpture (Teacurksorta.com), which I learn also was part of the “dragon” exhibition at the castle museum in Ljubljana.

The guesthouse offers a set dinner menu which this evening consists of zucchini soup, fresh baked bread, a pork dish, and a delectable dessert using the juice from forest fruits.

Along the way, we have seen vineyards, farms, orchards of apples, pears, plums, figs.

The attractions along the Emerald tour of Slovenia are what make this 8-day bike tour so special. The climbs – the ups and downs of Slovenian hills  make the ride a bit physical. There is not a lot of English spoken (except in the facilities that accommodate tourists) and it is hard to read the language, but that just makes Slovenia more exotic, more interesting, and you find other ways to connect.