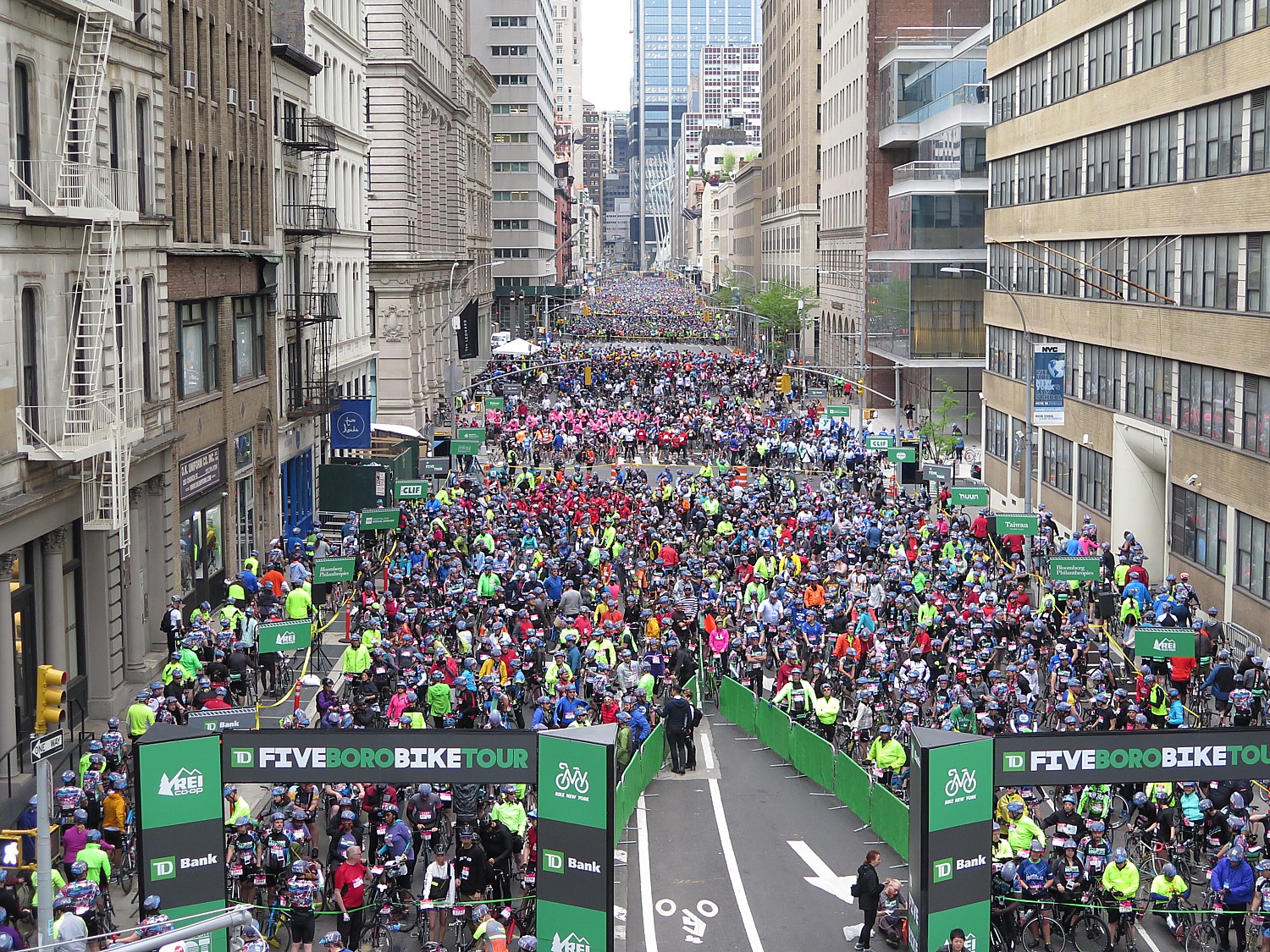 I was thinking of Nancy Vadreen, the student ambassador for the 41st annual TD Five Boro Bike Tour, as I flew down the mile-long descent off of the Verrazano Bridge (after the mile-long ascent) that deposits the 32,000 cyclists into the festival venue on Staten Island, feeling the wind in my face, so refreshing and freeing.

At the send-off for the ride that morning, she had described that feeling as a yearning. She was a 30-something who had never learned to ride a bike. “I dreamed of riding.” She went on the internet and discovered that Bike New York offers free classes at  many locations throughout the city. In fact, 25,000 people last year learned how to ride through Bike New York, the largest free biking education program in the country, and the annual TD Five Boro Bike Tour is the main fundraiser.

And here she was, riding in the 40-mile bike tour. “I’m proud and grateful to be riding the 40-miles at the TD Bike Tour. To learn to ride, to feel the wind when you coast downhill.”

I saw her again on the Staten Island ferry back to Manhattan after completing the ride – the thrill of accomplishment was still on her face.

REI, the presenting sponsor of the tour, pointed to the company credo, “Life outdoors is life well lived, it forges better connection to yourself.” 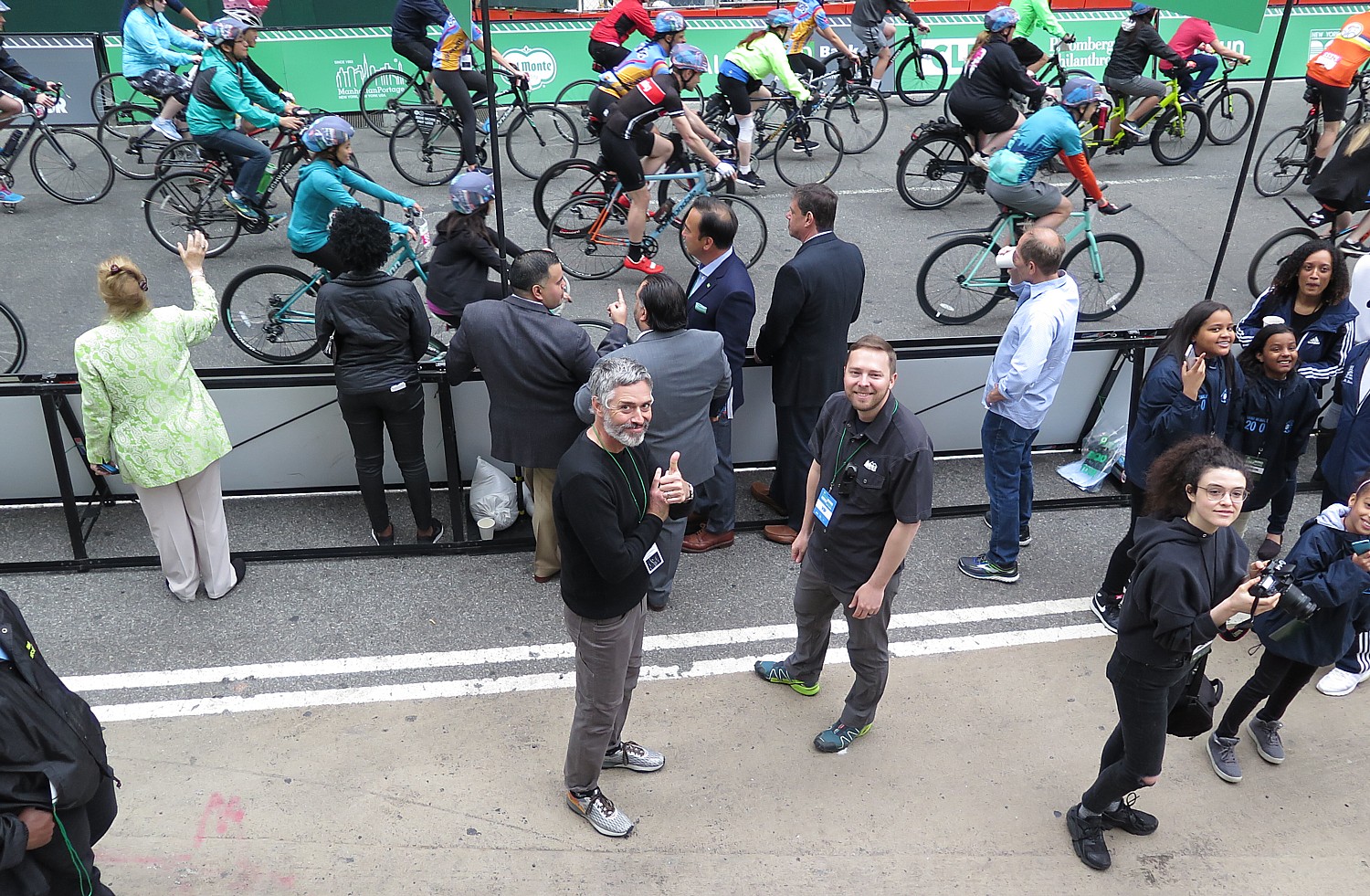 Kurt Feilke, retail director for the Northeast district for REI, the presenting sponsor of the tour, pointed to the company credo, “Life outdoors is life well lived, it forges better connection to yourself.” © Karen Rubin/goingplacesfarandnear.com

Such an outdoors experience does even more – it fosters such a sense of comradeship, this shared experience. And  it brings you into neighborhoods that are so typically New York, with bands and entertainment to cheer and inspire the riders.

What is so special about New York City’s TD Five Boro Bike Tour is how, for one day, you and 32,000 of your closest friends, feel like you own the city. The streets, bridges and highways – like Sixth Avenue, the FDR Drive, the Queensborough Bridge, the Brooklyn-Queens Expressway and the Verrazano (the longest suspension bridge in the Americas) are your domain. It makes you giddy. Neighborhoods ring with sound and spirit – Greenwich Village, Harlem, Astoria, Williamsburg, Greenpoint, DUMBO, Staten Island, Central Park’s blossoms seem to burst just for us.

The ride this year marked the 41st year of this event, which is the largest noncompetitive bike tour in North America. The ride has come quite a long way from that first one, in 1977, when just 250 people participated.

Riders, who race to get a spot as soon as registrations open (participation is limited to 32,000 but could easily be thousands more), came from every state in the nation (yes, Hawaii and Alaska), and this year came from 40 countries.

Manhattan Borough President Gale Brewer said “Thank you for your bike lane advocacy, for being healthy, for being part of the city’s future.” She thanked the DOT for making the Harlem River Bridges safe.

The annual event raises money for bike education. Bike New York operates bike education centers, after school programs, summer camps, and this year launched a Women’s Initiative, as well as its first membership program. “Alums” from the bike education program are joining the ride this year as “Student Ambassadors.”

The bike tour is also a model of sustainability, promoting recycling, water conservation, becoming the largest sporting event to be certified for sustainability by the Council for Responsible Sport 3 years ago. Each rest stop featured “zero waste” receptacles. Even the rider numbers were recycled.

The ride is designed to be a family friendly tour, not a competition, appealing to all abilities, ages – volunteers hold signs to slow the pace and alert riders to turns and obstacles.

TD Bank, which has been the title sponsor for the past 12 years, pointed to the continual expansion of sustainability efforts.

There’s a lot of good will here REI raises $5 million for community organizations.

But it is mostly in the one-to-one, the shared excitement that goes through all the people.

The 40-miles pass with one broad smile – we are sent off by the choral singing of Music With a Message, socially-conscious youth who inspire positive change and bring their message of love, hope in their singing.

At 6th Avenue we get our first cheering squad – there are at least one in every borough – and bands representing their borough, including Bombayo, Giant Flying Turtles, Night Spins and the Rusty Guns (one of my favorites).

“The thing that ultimately makes the event so special has remained a constant and can be summed up in one word: diversity,” writes Bike New York CEO Podziba in the official guide to the tour. “For decades, we’ve welcomed riders from dozens of countries and from every corner of this one, children and octogenarians, bike messengers, weekend warriors, everyday commuters, and even unicyclists, old pros and first timers… You never know who’ll be standing next to you at the starting line – they may be from a country you’ve never heard of.

“But diversity isn’t simply what makes our ridership so special – it’s also what makes New York City like no other place on the planet. Depending on who you ask, as many as 800 languages are spoken here. As you ride through all five of our beautiful boroughs… you’ll get the experience a 40-mile slice of the most populous, dynamic and ethnically diverse city in the country.”

There are any number of incarnations of bikes – tandems, kiddie carts, even elliptical contraptions that seem better suited to a gym (I meet a woman from Salt Lake City who said that 100 of them joined the tour from all parts of the country). There was even a grandson riding a rickshaw so his grandmother could have the joy of the Five Boro tour.

Indeed, everyone marvels at how well organized the ride is and all the precautions that are taken to make the ride safe, though we did see some spills and marveled at how quickly aid was provided..

We are 32,000 riders, but there are 2,000 volunteers who assist all along the way – marshals and course captains and EMS, and people along the route who tell us when to slow down and prepare for a turn, and rest stop people who hand out water and snacks.

And there is such a sense of liberation to take over New York City’s streets.

The ride embraces all five boroughs – and each shows off with street entertainment, raising the spirits of the riders along the route, and at rest stops (Clif Bar sponsored a DJ and entertainment at the Con Ed rest area) and at the Finish Festival on Staten Island (still three miles from the actual 40-mile mark, at the ferry terminal), where, all the finishers received a medal (and TD sponsored a free massage).

As in recent years, the  bike tour is preceded by a two-day Bike Expo, when bikers can take advantage of discounts and giveaways by scores of bike, biking gear, and bike tour companies and destinations from Quebec in Canada, to Taiwan, and special biking events through the World Association of Cycling Events.

I learned about a new online biking trip planner for the state of Maine, organized by the Bicycle Coalition of Maine, various biking groups and clubs (www.bikemaine.org/wheretoride), as well as Maine’s annual 8-Day Bike Maine trip with 450 riders going 320 miles (2018 is fully booked). There’s also the Bold Cost Scenic Bikeway, 211 miles of low-traffic, on-road riding; you can get detailed online and printable maps, GPS data, and local information to organize a self-guided ride (BikeBoldCoast.com).

Also, a 45-day cross-country bike tour, from San Diego, California to St. Augustine, Florida, with luxury accommodations (none of this camping stuff), fine dining, for $13,000, through Cycle of Life Adventures (they also have less ambitious itineraries). (cycleoflifeadventures.com, 303-945-9886).