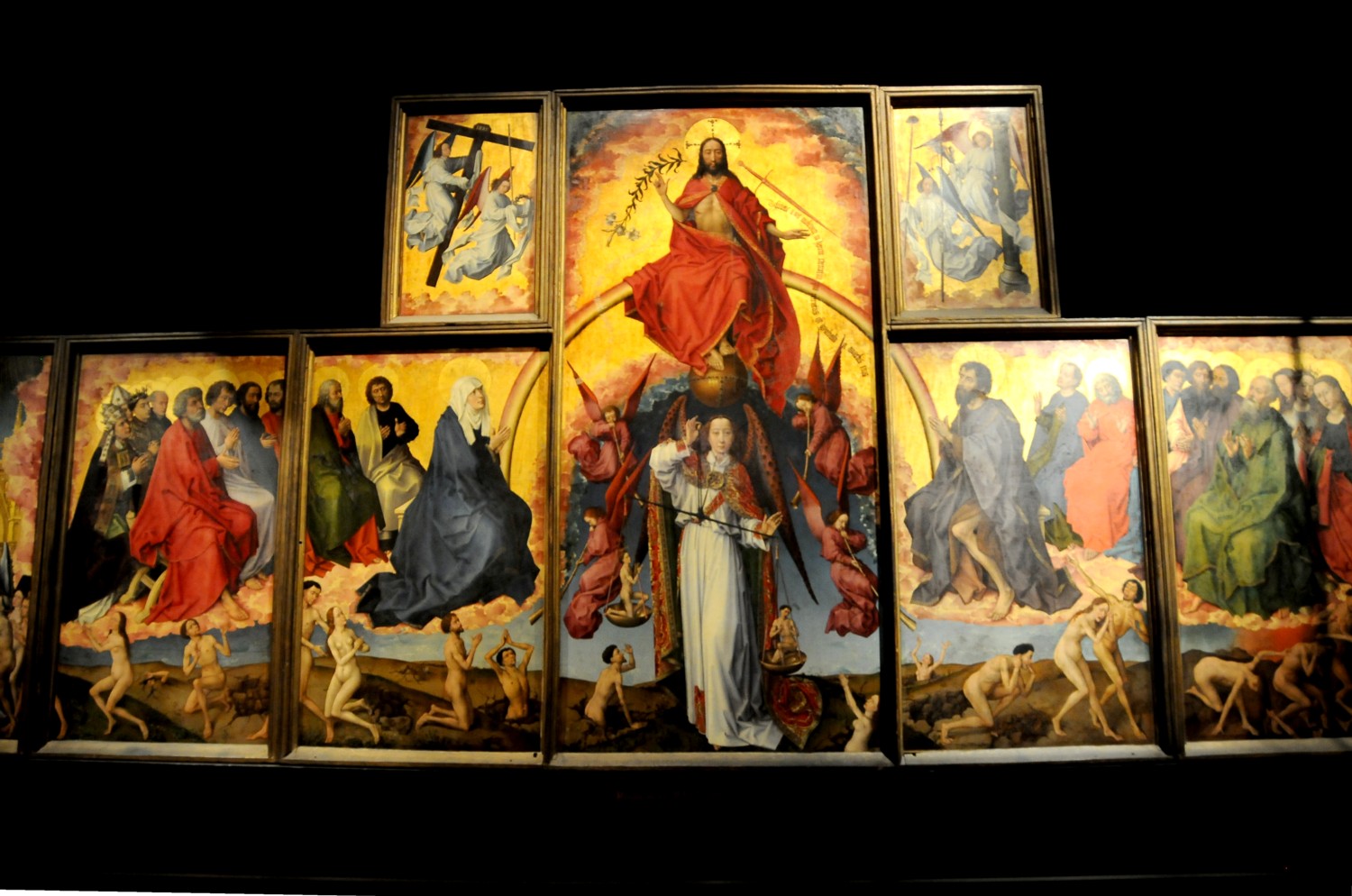 These next two days aboard the Caprice barge hotel, we cruise to a spiritual center, which is in the capital of Burgundy’s wine region, the Hotel-Dieu in Beaune, and the next day to the “mother church,” as it were, of Burgundy wine, the Clos de Vougeot, seat of the Confrerie des Chevaliers du Tastevin, the Burgundy wine society.

I get up early enough to have another walk in this picturesque village of Chalon sur Saône, before the barge pulls away at 8:30 am. We sail down the River Saône as we enjoy breakfast.

Hotel-Dieu a charity hospital founded in 1443, is one of the most important monuments in Burgundy © Karen Rubin/news-photos-features.com

We spend a lazy morning, sailing on river – this part more typical of a cruise. We sit and read, chat with our traveling companions, and look out at the pleasant landscape – riverside homes, and occasional heron or egret.

Before we know it, it is time for lunch – “charcuterie” (a cold meat platter), green bean salad, tomato and feta cheese salad, green salad, and lemon tart.

The wine is 2010 Macon Villages, a Burgundy white Chardonnay that is light, fruity, and perfect for lunch; and Cotes du Rhone, 2010, of Lyon, fruity flavor of cherries and red berries, a blended Gambon Cabernet, light wine for lunch

We arrive at Seurre, a lovely riverside town with a 16th century church and beautiful brick houses from the 17th century and travel by bus 26 km to visit the famous city of Beaune.

Beaune is the wine capital of Burgundy most famous for the magnificent Hôtel-Dieu, a charity hospital founded in 1443. The most important monument in Burgundy, it boasts the finest Burgundian-Flemish architecture in the world (and I believe it) and the largest roof of colored, varnished tiles, its opulence seemingly contradicting its purpose.

The Hotel-Dieu was built in 1443 by Nicolas Rolin, the chancellor to the Duke of Burgundy, Philippe-le-Bon. Rolin was in charge of finances (collecting taxes), and lo and behold, became extremely wealthy. At the end of his life, he had a great desire to “give back” to community (and buy a place in heaven). In 1463, King Louis XI, said, “This is a beautiful thing to do with all the money he stole.”

Remarkably, though no longer a hospital, the Hotel-Dieu is still a retirement home – with the longest waiting list in France. It is a wealthy institution from tourist revenue and donations over the centuries in the form of the vineyards and the wine that is produced. The home owns 60 hectares of most prestigious Bourgignon vineyards. At the annual wine auction, the wines typically fetch far more than wine is worth, to give “donation”.

The “new” part dates from the 17th century.

During June and July there are concerts here.

Inside, we see a vaulted gothic ceiling – how the hospital room would have had beds, with red velvet curtains for privacy, lining each side of the room.

The hospital area in Hotel-Dieu, where beds with red velvet curtains line both sides of the vaulted room © Karen Rubin/news-photos-features.com

We see where “Seule etoile” is spelled out in floor tiles, an expression of love from Rolin to his wife, meaning “only star,” which comes from the way he referred to his wife, “The only star of my heart.”

The kitchen has a huge dual-hearth Gothic fireplace, with its original accessories; the floor of the hearth is tiled with the “Seulle star” motto. Most interesting is the steel spit, made in 1698, which is turned by a little “robot,” Maitre Bertrand, dressed in the traditional costume of large floppy boots, white breeches, red jerkin with gold buttons and a white cap with turned up brim.

The Hotel-Dieu in Beaune boasts the finest Burgundian-Flemish architecture in the world © Karen Rubin/news-photos-features.com

We visit the centuries old pharmacy and can see the machine that was used then to make suppositories.

There are shelves stocked with bottles of ancient remedies from that time, like Teriacr, one of most common remedies of the time, made from venom of viper. I see a jar dated 1777.

In the pharmacy at Hotel-Dieu, the charity hospital founded in 1443, see centuries-old jars of medicines © Karen Rubin/news-photos-features.com

The glass bottles still contain “specifics” with names that sound like they have come out of Harry Potter: woodlice powder, eyes of crayfish, vomit nuts powder, elixir of property.

The piece de resistance of the hospice is the Polyptych, kept in a darkened room which you enter through a glass door. These are unimaginably stunning panels commissioned by Rolin in 1443 and completed in 1445, attributed to Flemish artist Roger Van der Weyden. Representing Last Judgment, it was placed above the altar of the Chapel, but was only allowed to be seen by the sick on Sundays and feast days.

The detail is so exquisite, there is even a large magnifying glass that makes sweeps over the panels. You see St. Michael weighing souls, Christ, Virgin Mary (trying to alleviate judgment), St. John, apostles. The people who are damned are on the right; the left has people who will go to heaven.

Our walking tour continues in Beaune – the church of Notre Dame, dating the 13th century, has a magnificent stained glass window, rare for its grey and yellow coloring, dating from 16th century.

Panels of the Polyptych, completed in 1445, attributed to Flemish artist Roger Van der Weyden, at the Hotel-Dieu, Beaune © Karen Rubin/news-photos-features.com

This being the capital of Burgundy wine, there is a Museum of Wine (we visit an outdoor display of ancient presses) and walk through ramparts from the 15th century.

After Guy’s guided tour, we still have two more hours to explore Beaune on our own before returning to the barge by bus. It is a bustling city, with loads of wine cellars and shops and cafes, befitting a wildly popular tourism center.

Beaune is a bustling city in Burgundy © Karen Rubin/news-photos-features.com

Back at the Caprice, I go off to explore Seurre, which dates from 1278.

The “new” town hall was built 1771, with neoclassic façade.

L’Eglise Saint Martin dates from the 13 C-14C; it was damaged in 16 and 17C but restored. The chapels were built for the most revered families of 15 and 16 C. The largest chapel was for the Bossuet family, the most influential family in the city. Some were elected city magistrates and mayors of Seurre, but the family had humble beginnings as wheel wrights. (There is a Rue Bossuet in Dijon.)

Dinner consists of a marvelous gazpacho soup with crayfish; codfish in a delicious lobster sauce served with artichoke, zucchini, and cherry tomatoes; and for dessert, a grape tart.

The cheese selection, Comte, is from the Franche-Comte region, and Sainte Maure is a masterpiece of Touraine goat cheese, rolled in black wood ash, recognized for the long straw through the middle (which facilitates handling).

The wine this evening is a Montagny l’er Cru (“cru” means it is a superior wine); and a 2010 Chinon from the Loire, which has a sharp, firey, fruity, black currant flavor.

I am thoroughly enjoying these anecdotes about the wines and cheeses.

We start the day sailing on the River Saône to St. Jean de Losne, where we connect to the canal de Bourgogne.

We see scores of barges here, including many live-aboard barges that people either rent or own. I don’t envy their effort to get through these locks on their own.

Today’s shore excursion takes us through the Cotes de Nuits region, famous for its vineyards, to Clos de Vougeot, where wine has been produced by local monks since the 12th century. It also is the seat of the Confrerie des Chevaliers du Tastevin, the Burgundy wine society.

Winemaking in the Cotes de Nuits dates back to the 12th century © Karen Rubin/news-photos-features.com

The 12th century monks of Citreaux transformed winemaking, turning their vineyard into a model for “scientific” pruning and cultivation.

In 1790, during the French Revolution, the Abbey and its annexes including the Vougeot vineyard, were confiscated and declared “Property of the Nation”. For the next century, the domain changed owners frequently. It was gradually broken down until 1889, when the buildings and remaining vineyard came into the hands of Leonce Bocquet, a Burgundian owner, who saved the edifice from destruction and spent vast amounts of money restoring it.

The Caprice cruises the picturesque canals of Burgundy © Karen Rubin/news-photos-features.com

Etienne Camuzet, acquired the chateau in 1920 and made it available to the Confrerie des Chevaliers du Tastevin, an association of wine growers, in 1934.

In 1944, it became the “spiritual” home to the Confrerie, which became the caretaker of the Clos de Vougeot, turning the chateau into a kind of Acropolis of Burgundy where pilgrims from the world over come (www.tastevin-bourgogne.com, info@tastevin-bourgogone.com).

The association wanted to elevate Burgundy wine, which had fallen in prominence to Bordeaux wine. The society was meant to market the wine, but they did something quite clever: they invited popular entertainers (like Maurice Chevalier) and important diplomats to become Members of the Society. It worked, and they brought back Burgundy as a major player in the international wine industry.

On the walls, we see the annual photo of the Society members, looking regal in their sashes.

From here, we go to a private wine tasting in Nuits St Georges before we return to Caprice.

The Caprice cruises through picturesque countryside of Burgundy © Karen Rubin/news-photos-features.com

Along the way, we see fields of sunflowers browning – used for fuel – and solar panels on “ancient” houses.

Meals are an Event

Meals are an event on the Caprice. The tables today are decorated with colored napkins, beautiful place settings. Tina waits for everyone to be seated, and then makes a presentation of the menu, the wines and the cheeses, telling interesting stories about them.

The Caprice cruises the canal of Burgundy © Karen Rubin/news-photos-features.com

The wines are Cotes Chalonnaise and Cotes de Provence Rose

After lunch, we bike along the tow path of the canal.

The gatekeeper at lock 62 shows us his museum of collections – everything from postcards to wine to coins.

Fine dining aboard the Caprice

The cheeses today are Morbier, a cow’s milk cheese, sometimes known as night/day cheese becasue one side is made from morning milking and the other is evening, Tina says. “With a good palette, you can tell the difference -stronger tasting side is the morning milking, more flavor.”

Valencay is a goat milk cheese in the shape of a truncated pyramid, with a salty flavor and crumbly texture, coated in wood ash to preserve the flavor. Tina tells us the story of the cheese, which dates back to Napoleon: it was made in his honor in the shape of a pyramid, expecting Napoleon to be victorious in Egypt. Instead, Napoleon, who lost in Egypt, was offended by the point of the cheese, so it is always made with a truncated pyramid “so not to offend his relatives” (it is fantastic).

The Caprice is owned by Barging Through France, and represented by France Cruises, Inc, San Antonio, Texas, 866-498-3920,www.francecruises.com, www.FranceCountryTours.com.