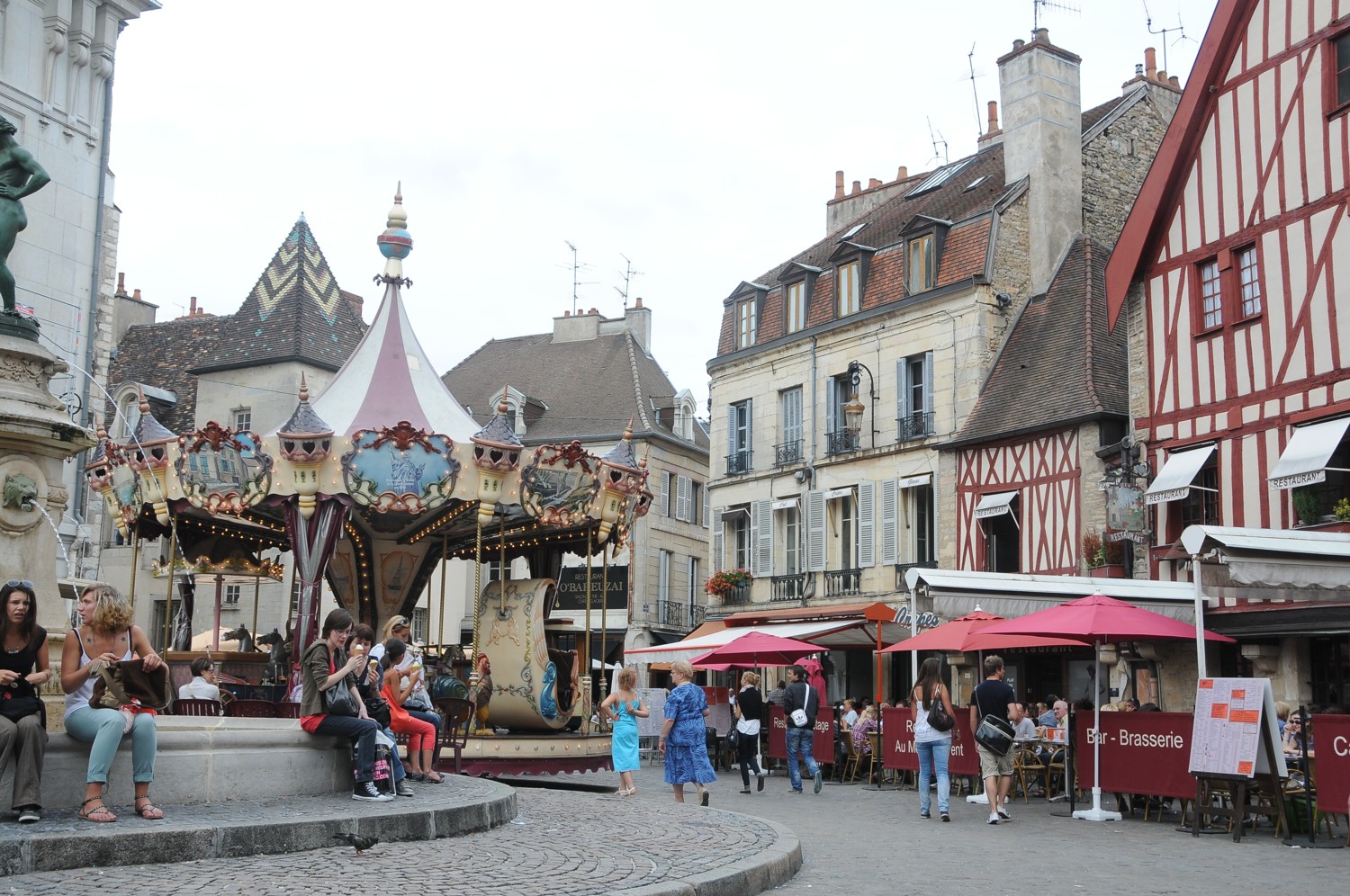 We are only a few miles to the last lock before Dijon, the capital of Burgundy, and the French landscape, though still predominantly countryside, becomes more and more populated and commercial as we come closer.

After breakfast on board the Caprice, our charming barge hotel, we take bikes and explore a village.

Back on board the Caprice, Chef Herve treats us to a cooking demonstration – he is preparing salt-encrusted salmon, which is the lunch entree, along with a variety of salads.

The Caprice, one of France Cruises’ luxury hotel barges, floats up a canal in Burgundy © Karen Rubin/news-photos-features.com

The wine is a 2010 Musadet Sevre et Maine sur Lie, from the Loire Valley, with a fresh, sharp, neutral flavor to compliment fish; and a 2010 Burgundy red, Saint Armour, named for the village which was named for a martyred Roman soldier, with a fruity flavor of currants.

The last bridge before we enter Dijon’s port is one where we all have to duck – it seems the barge uses every inch of space above.

We come into the port of Dijon, where we will stay overnight.

Caprice’s Chef Herve serves the salt-encrusted salmon for lunch; earlier in the morning, he provided a cooking demonstration © Karen Rubin/news-photos-features.com

Guy, who has been our guide and bus driver throughout our journey, takes us for a guided tour into the Dijon’s old city, the climax to an incredible week-long journey into Burgundy’s countryside. Dijon is the crowning jewel.

The historic district is just a 15-20 minute from where the Caprice is docked, so we can return on our own and have a couple of extra hours to explore.

As always, Guy, who is a former journalist, is fascinating, illuminating with stories and anecdotes what we can appreciate visually.

He reminds us of the popular Burgundy drink, Kir, which was named for a mayor who served from 1946-1960, was a priest, a canon, and a member of Parliament- the famous drink is named for him. “He did nothing in Dijon – that was reason it is well preserved.” The current mayor, on the other hand, wants to modernize, and is constructing a street car (light rail).

Dijon is a household name because of the mustard, which is still produced here, but these days, they import seeds from Canada. It is also a center for artificial flavors and fragrances.

Dijon is the capital of Burgundy – hospitals, university, administrative services (government), and the main stop between Paris and Lyon.

Burgundy was an independent state, and allied with Britain against France. The last Duke was killed 1463 – his enemy was King Louis XI of France, known here as “the Sneaky One” because though France had a treaty with Burgundy but the King still invaded Dijon.

One of the highlights is the main indoor market – a marvel of steel architecture that goes back to Eiffel, though his colleague finished the project.

The Caprice squeaks under the bridge as we float into the port of Dijon © Karen Rubin/news-photos-features.com

It is just across from the church of Notre Dame with a marvelous bell clock. “The King of France tried to bribe a town in Burgundy to rebel, and when it did, the Duke besieged it and as punishment, in 1673, took the clock. At the time, it only had a man with the pipe; then in 17C, the people of Dijon (who have a good sense of humor), added a woman so the man wouldn’t be lonely, and in 18C, added two children.” The man strikes the bell on the hour; the woman on the half, and the children on the quarter hour.

Notre Dame has stunning gargoyles, but Guy tells us that a usurer was killed when a gargoyle broke off and fell on him. As a result, the “corporation” of loan sharks demanded they all be taken down; but finally, they were cleaned and replaced in 18C. Notre Dame was defaced during the 1793 Terror, and the anti-religious furor that swept through.

The Church of Notre Dame provides a dramatic backdrop at the end of the Rue Musette © Karen Rubin/news-photos-features.com

The owl is symbol of Dijon, and there is an owl on Notre Dame that legend says, you touch with your left hand to have a wish come true (it’s been rubbed smooth over time).

Here we come to the Maison Millière, the charming shop we had first encountered on our first afternoon in Dijon, which specializes in hand-crafted owls.

There are fabulous buildings – stately majestic public buildings, grand mansions that served the noble members of Parliament – through Dijon.

Many of the grand buildings have been “re-purposed” after the Revolution.

Guy, our guide from the Caprice, explains the legend of rubbing the owl that is on the side of the Church of Notre Dame, with your left hand: wishes come true © Karen Rubin/news-photos-features.com

What is astonishing is how many famous people are associated with Dijon: the architect of Versailles, Jules Mansart, also designed the Plaza Royale; Francois Ronde, who designed the Arc d’Triomphe in Paris, is from here.

I wander on my own, and am fascinated with the street names, many with biographical information

In the square of Dijon’s Old City, buildings from the Renaissance flank a carousel from 1865 © Karen Rubin/news-photos-features.com

Rue Danton was named for “conventionnel organisateur de la defense nationale, ne en 1759, mort sur l’echafaud en 1794.” I am fascinated and subsequently learn that Georges Danton was a French Revolutionary leader and orator, often credited as the chief force in the overthrow of the monarchy and the establishment of the First French Republic (September 21, 1792). He later became the first president of the Committee of Public Safety, but his increasing moderation and eventual opposition to the Reign of Terror led to his own death at the guillotine.

I come upon Eglese Saint Philibert, originally built in 12th century, and destroyed in the Reign of Terror that followed the French Revolution. It is now undergoing a restoration.

I am so happy that I will have two extra days in Dijon (see story).

I walk back to the Caprice in time for our gala farewell dinner.

The last night of our cruise is a gala dinner (we “dress” in our finest, that is what we have with us) – the table, in a U-shaped banquet formation, is set magnificently, with fresh lilies and zinnias.

The menu consists of foie gras with leek salad with a sweet fig jam; filet de boeuf with red wine sauce, potatoes from Noirmoutier and mushrooms.

The 2007 Sainte Croix du Mont, a Sauvignon Blanc, Tina tells us, is produced at a vineyard on right bank of Bordeaux in southeast France, where there are early morning mists (usually not good for wine) is difficult to produce. “You need a lot of luck. The grapes have to develop a ‘local rot’ – a fungus – which actually produces a bursting sweetness. The yield is small – you have to pick the grapes by hand when ripest – a lot of work. It’s lighter than a dessert wine but full bodied.”

The red is a Grand Barrail Larose St Emilion 2009, a Bordeaux.

Three houses dating from the 1400s in Dijon’s Old City: the middle one is propped up by the two on either side © Karen Rubin/news-photos-features.com

The cheese tonight is a Roquefort – the quintessential sheep’s milk blue cheese from Avignon in the south of France, owes its distinctive character to a mold found in the soil of local caves

The second cheese is a Brie de Meaux, from the Ile de France, a creamy cow’s milk similar to Camembert. “King Louis XIV had 3 passions: poetry, wine and cheese,” Tina, the general manager, says. “He would send a damsel a cheese with a poem”

The dessert is a Chef’s surprise (actually a birthday cake for one of the guests).

Lunch onboard the Caprice always features red and white wines as well as cheeses © Karen Rubin/news-photos-features.com

Friday morning, after breakfast, we depart the Caprice. The whole crew, wearing their Barging Through France shirts, line up to greet us and bid us farewell. It is that most amazing and gratifying feeling that only travel provides when you get to realize how everyone has bonded and formed friendships in just a week’s time.

In reflection, I think this is as perfect a trip as it could have been, vastly exceeding my expectations – in terms of the sights we have seen, the interesting attractions and excursions, the quality of the wining and dining, the cruise experience – France Cruises, the American agent for Barging through Burgundy which owns and operates the Caprice, really offers superb value for money.

The passengers onboard have really bonded – gives you plenty of opportunity – we are not on top of one another, but the meals, where you basically sit where you want or where there is room, so the table groupings always change, and you get to know one another, or when walking or biking along the canal, or on the bus or walking through the villages during our excursions, or in the evening sitting around in the lounge or on deck… people came from all over and many different backgrounds, but shared an interest and eagerness to learn and experience things, and we each shared from our own experience and knowledge base.

The immersion into French food and wine – especially with the selection of wines and cheeses at lunch and dinner – has been very satisfying and also interesting, since food and wine are so inextricably linked to culture and heritage of a place.

The size of the boat and the service makes it ideal for families, family reunions and groups of friends traveling together. There are barge boats that a single family can hire and guide themselves , though it seemed to me to be tricky process to go through the canals – some were automatic, operated by sensors, some had attendants, but some involved hand-cranking the bridge or pulling a chain to activate the doors.

Many people have the concern that you can get bored on a barge cruise or feel confined, but we are never bored or stir crazy – because of the opportunity to go off the boat and explore, especially by bike, and also the excursions. Those who want a more sedentary experience can have it, as well.

This size boat and the itinerary are perfect for us – not too small that you are forced to be on top of people or lacking in level and quality of service, and not too big.

The crew of the Caprice at the farewell gala banquet © Karen Rubin/news-photos-features.com

The daily excursions are marvelous and interesting and take you to places you might not have known to visit, and into the essence of what the region is -particularly the visit to the Chateau Rully with the Count – just seeing the portraits on wall of his ancestors, the very mug his 14th century ancestor had drunk from (that he still uses), the personal artifacts of the family were amazing.

Considering all that is provided, and the high level of service, the experience fulfills France Cruses’ boast that this cruise affords some of the best value in canal cruising in France (particularly with the special offers and packages that are available from time to time). I am a believer.

The cruise aboard the Caprice is now completely updated for next season:http://www.francecruises.com/barge-354-Caprice-742.html

Dijon is such a fascinating city, our exploration continues (see A Walk Through the Centuries in Dijon, France).