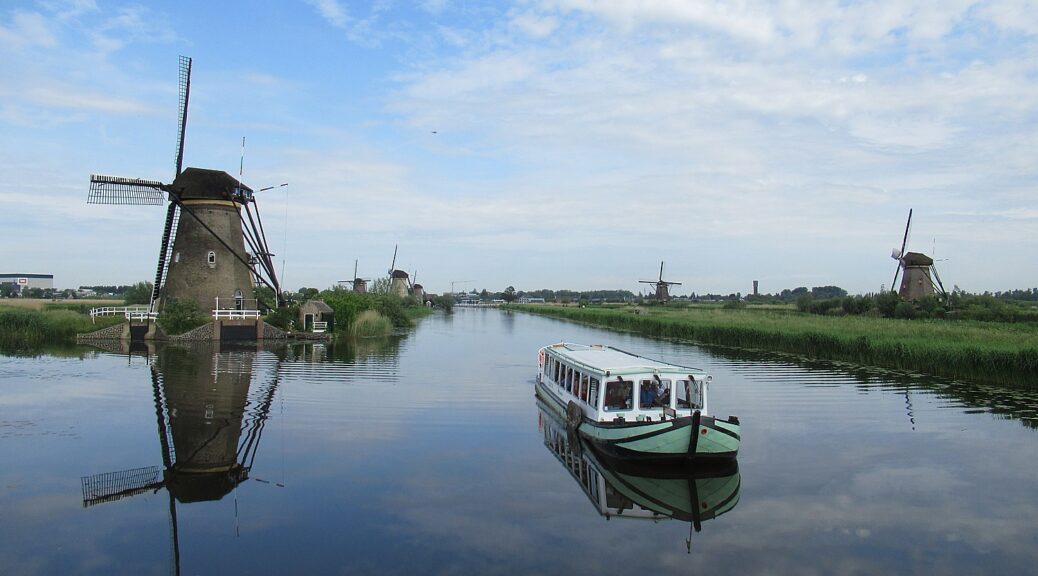 Day 6 of our BoatBikeTours bike trip from Bruges to Amsterdam proves to be the absolute highlight (out of many) and not just for the iconic attractions (spoiler alert: windmills!), but the serendipitous experiences that are the essence of travel.

We set out for this day’s ride, 35 miles from Dordrecht to Vianen, riding along a berm that looks down on the river where we can see our ship, the Princesse Royal, sailing along on the left while on the right, just behind a row of houses, we see windmills.

We soon come to Kinderdijk, a UNESCO World Heritage site where you can see one of the best collections of these centuries old windmills (the name literally means children’s dike).

I always thought of windmills as industrial engines to grind grain or saw wood, and windmills had that function in Holland as well, but in the mid-1700s, Holland used windmills as pumps to drain water to create farm land that otherwise would have been below sealevel. They began by reclaiming two huge patches of land with a system of canals, dykes and windmills to pump water out. Methods changed over time, with the addition of steam engines, electric pumps, that are in a race to take the water out of reclaimed land. But it is expected that this place will eventually succumb to the sea and be below sea level. (Like Venice, see the windmills now!).

The Dutch have been building hydraulic works for the drainage of land for agriculture and settlement since the Middle Ages and have continued to the present day. And these windmills’ most critical task was the ongoing water drainage because 26 percent of The Netherlands is below sea level. Each year, 5 trillion gallons of water must be pumped out to avoid flooding the low-lying parts of the Netherlands. (https://netherlandsinsiders.com/why-is-the-netherlands-known-for-windmills/)

At its peak, there were more than 10.000 windmills operating in The Netherlands. Today, there still are more than 1,000 (and we encounter many of them along our ride – along with the modern day version, wind turbines).

Two of the mills at Kinderdijk, Nederwaard Museum Mill (built in 1738), and Blokweer Museum Mill (which shows what life was like in the 1950s) are opened daily to the public, in addition to boat tours, which can be visited with an entrance ticket .

Kinderdijk is an enchanting place – like a Dutch painting come to life – and after giving us a good amount of time to explore on our own, we get back on the bikes and follow the trail through this entire expanse to continue on our way to Schoonhoven.

We bike to where we are having lunch – a delightful market and a marvelous shop, which usually has tables outside. But they are doing construction so we sit at tables in the barn, with cows, goats, rabbit, lambs. (Unexpected!).

Rain is expected and sure enough, it comes in like clockwork (1 pm) as a furious downpour with thunder and wind. We are cozy inside with the cows and goats. (I’m just so grateful the rain waited until after we visited Kinderdijk.)

Right on time, the thunderstorm passes, but more is expected, so our leaders decide not to offer the option of the longer ride (we were looking forward to riding through peoples’ backyards, as our leader, Arnold Thurko, described), and so set out.

The atmosphere is utterly magical – a milky/creamy quality washing over the green/grey landscape with touches of yellow and orange, dotted with windmills.

The ship meets us at Schoonhoven and takes us on to Vianen.

Dinner this evening is a delicious broccoli soup with cucumber; cod with white herb sauce; vegetables, potatoes; and for dessert, a white chocolate mousse with pistachio.

After dinner, we walk off the ship and our leader, Corrie Stein, guides us on a tour of of Vianen, delighting us with her storytelling. Vianen, she says, calls itself a “free town,” by which I take to mean they are libertarians, resistant to national authority, like paying taxes, and not too welcoming to outsiders. “The city is proud of being a free town.” “Libre” is proclaimed on a sign as we walk in.

She points out other aspects of culture: “Dutch symmetry”. “People will have two of the same planters for symmetry/balance” and the tradition of keeping curtains open (so others can see how nice it is inside).

The local hero here is Hendrik von Brederode, a nobleman who lived from 1531-1568. He became   important during the Dutch revolt against the Spanish king for religious freedom, the Eighty Years War.

“In the Netherlands, when we want something badly, we can petition parliament. Nobles sent Hendrik to the representative of the Spanish king in Brussels to petition for freedom of religion. But in translation, the word ‘beggar” or ‘begging’ was attached to him. “From then on, they called themselves ‘beggars’.” Hendrik was nicknamed the “Grote Geus” or the “big beggar”.

“Eventually we got freedom of religion, after the 80-year revolt.”

Most villages have a main square. Vianen – being so independent, I guess – has a boulevard instead.

Napoleon made a road from Paris to Amsterdam and armies and Napoleon came here (& Dordrecht) and drank red wine.

At the Town Hall, Corrie explains that the ground does not support tall towers, and there is not a lot of stone to build with, so it is very prestigious to build with natural stone instead of brick.

On the chimney on top of the Town Hall we see a stork nest – Corrie says the story that associates storks with delivering babies comes from Dutch tradition.

On the outside of the apothecary, there is a bust of a taste tester “to show the medicine was safe.”

Where the historic castle used to stand today there is a water tower – the first in Netherlands to be made of concrete – which turns out to be an icon of Vianen.

She also points to a tree – the Queen Wilhelmia tree. “The House of Orange was depending upon one small girl to keep the house going – would she stay alive? Communities planted trees of hope. The House of Orange had one child – Queen Juliana – who had four daughters.”

In the morning of Day 7, our last day of cycling, our ship, the Princesse Royal, sails from Vianen to Breukelein, which I learn (most delightedly) that this is where the first settlers of Brooklyn came from. (Corrie jokes that it has its own Breukelen bridge; we stop at for photos). We will bike from here to Amsterdam (New York, you will remember, was originally New Amsterdam) – our last stop on our boat/bike tour.

The path from Breukelein along the River Feckt that goes up to Amsterdam is gorgeous, dotted with literal mansions built by textile magnates. “400 years ago this was an important place- the wealthy from Utrecht and Amsterdam would flee the city in summer –heat, diseases – and built impressive summer houses,” Corrie tells us.

They were built over a 400 year period and French destroyed many and many were replaced, so they have different styles. Many have impressive gardens and tea houses. It is reminiscent of Newport’s “cottages.”

“It was scary for people to be outside city, so they even “controlled” their gardens and would buy the view across the river (that remains true today).

We cycle on to a dairy farm and cheese factory, Willigen, in Vreeland and are given a truly fascinating tour by owner Corey, (her brother, Henry Villa, is famous for his cheese shops but his sister, who uses the same recipes, prefers to stay small scale). I’m fascinated by the sophisticated, computerized operation. (They also have a bnb, www.dewilligenlogies.nl/nl/)

They have 80 milking cows on 180 acres of land. The cows come in for milking at 5:30 am and 5:30 pm – 10 cows on each side. One person can milk the 80 cows in an hour. The cows all have computer IDs – when their head is inserted, the computer knows the cow, how many kilos and type of food pellets every cow needs. Each cow is milked 300 days of the year and produces 30 liters of milk a day.

The milk, just five minutes old, goes to the cheese-making factory. “The difference between farmer cheese and factory is the farmer is not allowed to pasteurize milk. Milk that is three days old is used as starter milk for the cows.It takes 10 liters of milk to make 1 kilo of cheese.

We bike along the River Vecht where there are number of houseboats – we are getting closer to Amsterdam.

At Muiden, we take a bit of a detour to see Amsterdam Castle Muiderslot, one of the oldest and best preserved castles in the Netherlands. The castle was built around 1285 and has a long and turbulent history. It forms part of the Defense Line of Amsterdam and the New Dutch Waterline, both UNESCO World Heritage Sites. It has been a museum since 1878.The castle is surrounded by gardens (muiderslot.nl).

We set out again for Amsterdam, our end point, but the option to take the longer route is taken away because of concern for a severe rainstorm.

We ride fast to get to the ship before the rain, meet the ship and sail into Amsterdam, where it is already raining.

We are docked on the opposite shore from Amsterdam’s city center, but Amsterdam is so bike/pedestrian friendly, the city offers free ferries that run constantly.

We literally step out of where the Princesse Royal is docked and walk a few steps to the ferry to Amsterdam’s Central Station and the historic city center. So I hop on one to go into the historic center for a walk-about in the rain before our gala, farewell dinner.

Corrie and Arnold also help those who need to get a COVID test before traveling back to the US make the appointment (an extremely efficient system from Spoedtest.nl in Amsterdam, and helping us organize for our departure.

This is an ideal trip especially if you are traveling on your own, if you are new to biketouring, or with a family or just want a relaxing, incredibly scenic and interesting ride. The scheduling, route, itinerary, tours and excursions are excellent – and I especially love how our ship in most cases docks right at the town so we can walk off and visit.

One thought on “Bruges to Amsterdam by BoatBikeTours: The Windmills of Kinderdijk”