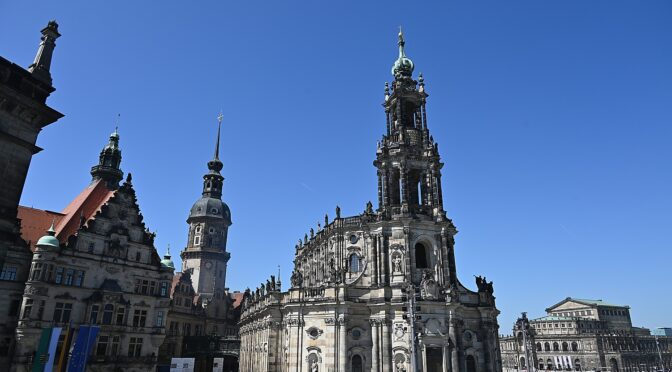 We sail on to Dresden, where CroisiEurope’s MS Elbe Princess is supposed to dock for the night, and we are invited to take a 9 pm walk through Dresden’s historic city center. We are all excited and standing around, when we just sail passed. It seems that the docking spot which is reserved for us was occupied by another ship, and because it is Sunday night, there is nobody to complain to or address the issue. So we sail on to Meissen while the ship’s manager scrambles to arrange for a bus to take us back to Dresden for the morning’s excursion.

Our excursion the next morning is first by bus for an overview and then walking, and between the two, we get to see – from the outside at least – Dresden’s highlights and get a sense of its history, but this is certainly a city that deserves more time and a more immersive experience.

Most of Dresden’s city center was destroyed in World War II, but the “suburbs” survived the so-called “moral bombing” in which 25,000 out of a population of 650,000 died. But you would hardly realize it – except that our guide, Alexandr Klein, pulls out black-and-white photos of the destruction so we can compare.

It’s fairly amazing, then, that the bombing could not stamp out Dresden’s extraordinarily rich history, heritage and culture, which in so many instances, have risen literally from ashes. They have restored and reconstructed the architecture, saving the facades where possible and in many cases reusing the stones;.

It was here, August 26-27, 1813 at the Battle of Dresden that Napoleon had his last big victory in Germany. It was fought on the outskirts of the Saxon capital of Dresden, between Napoleon’s 120,000 troops and 170,000 Austrians, Prussians, and Russians under Prince Karl Philipp Schwarzenberg. Alas, victory was short lived – a week later, Napoleon was defeated at Leipzig.

Dresden is a “green city’ boasting more trees (600,000) than humans (550,0000). We drive through an enormous park – like Central Park – where among the sites is the intriguingly named German Hygiene Museum, Europe’s only science museum to focus on the human being and body within the context of the environment and society, culture and science.

We drive by the New Synagogue, built in 2002 to replace the 1840 synagogue designed by the revered architect Gottfried Semper, that was destroyed on Kristalnacht, Nov. 9-10, 1938. At its peak, Dresden had 5000 Jews; today there are 700. “Most had escaped before World War II, so we have Jewish life again.” The New Synagogue has Star of David finial from the old synagogue. “A fireman who put out the fire in 1938 saved it, then gave it to survivors after the war.”

We pass Fletcher street. “The Soviets arrived May 8 1945. 200 soldiers had died in combat; Hitler had already committed suicide. Fletcher took white flag to surrender to the Soviets. The SS shot him in the back. He was martyred,” Klein relates.

Dresden also shows its history under Soviet occupation. There is probably no sight that better encapsulates the Soviet era than “The Red Flag” mural and wall fresco, “Our Socialist Life” on the exterior of the Dresden Kulturpalast. It was the pride of GDR architecture when it opened in 1969 as a “House of Socialist Culture”. Today it is the home of the Dresden Philharmonic.

“The revolution against Soviet rule started in Dresden and Leipzig churches in 1989. It was the only successful revolution in German history. Then the Berlin Wall came down a year later.”

We get off the bus and start a delightful walking tour through this beautiful city.

We start at Frauenkirche, the Church of Our Lady. Completed in 1743, the Baroque church was considered one of the most beautiful in Europe. After it was destroyed by Allied bombing in 1945, the ruins were catalogued and stored for its reconstruction. 4,000 of the original stones were used in the rebuilding, which began after Germany’s reunification, in 1990 and reopened in 2005. Great Britain, which was responsible for the bomb that had caused so much of the devastation, sent a gold cross to place at the top.

We see the famous Fürstenzug – the Procession of Princes – a 102-meter-long portrait of the Dukes, Electors, and Kings of the house of Wettin, together with leading German figures from the arts and sciences. Commissioned in 1870, it consists of 25,000 Meissen Porcelain tiles.

Our guide, Alexandr Klein, points out Taschenberg Palace, built in the 18th century by the Saxon King, Augustus the Strong for his mistress. (Augustus “had ambitions to be like Henry VII”; a mistress was an actual official position, he tells us). There is a bridge, reminiscent of the Bridge of Sighs in Venice, connecting it to the Royal Palace. The original building burned down and was faithfully restored in 1995 and transformed into the luxurious Hotel Taschenbergpalais Kempinski Dresden, owned by the Thai royal family (rooms can cost as much as 10,000E/night). A member of Historic Hotels Worldwide since 2017, it is within the historic city center, steps away from the most renowned sights, such as Semper Opera House, Royal Palace, Zwinger, and the Frauenkirche. (Famous past guests of the Taschenbergpalais include Prince Albert II of Monaco, designer Karl Lagerfeld, and President Jacques Chirac of France, https://www.historichotels.org/hotels-resorts/hotel-taschenbergpalais-kempinski-dresden)

We walk along a Tuscan-style arcade with 22 rounded arches leading to the Court Stables.

One of my favorite parts of this delightful walking tour is strolling along Brühl’s Terrace (Brühlsche Terrasse), also known as the “Balcony of Europe.” Our guide explains that by the 19th C, Dresden already popular for European tourists. This half-mile long promenade is built on the old city ramparts and was laid out in 1738 as a private garden; it was opened to the public in 1814.

Klein points to where novelist Kurt Vonnegut, who fought with Americans in World War II, was held as a POW in the slaughterhouse district. He wrote “Slaughterhouse 5,” a science-fiction infused anti-war novel, based on his experience.

Klein leads us to the Zwinger, a magnificent early 18th-century palace and a stunning example of Baroque architecture. Inside is The Old Masters Picture Gallery with 750 paintings from the 15th to 18th centuries, among them Italian Renaissance and Baroque masterpieces by Raphael, Titian, Correggio, and Tintoretto, and Dutch and Flemish paintings by Rembrandt, Rubens, Van Dyck, and Vermeer.

Also worth visiting (we don’t have time) is the Royal Palace, which houses some of Dresden’s most important museums, including the Green Vault and the Numismatic Collection. You can also visit the State Apartment, a suite of rooms that have been faithfully restored to their original condition.

The tour gives us an overview, but I wish we had the afternoon to explore on our own.

(You can get a Dresden museum card with gives two days and free admission to the city’s must see museums and exhibitions: Old Masters Picture Gallery with Sculpture Collection until 1800; Royal Cabinet of Mathematical and Physical Instruments; Collection of Prints, Drawings and Photographs, Porcelain Collection; The Royal State Apartments of August the Strong and the Porcelain Cabinet, Coin Cabinet; New Green Vault; Renaissance Wing; Giant´s Hall of the Armoury; Turkish Chamber; Albertinum with Art from the Romantic Period to the Present Day; Lipsiusbau Exhibition Hall; Museum of Saxon Folk Art and Puppet Theatre Collection; Special Exhibitions in the Japanese Palace; Joseph Hegenbarth Archive; Hausmannsturm, 22E pp).

We are returned to the ship for lunch, and in the afternoon have a walking tour of Meissen.

We ride an elevator to the hill top, and visit the Cathedral, a three-nave Gothic hall church built between 1260 and 1410 and preserved in its near-original medieval state. We buy a ticket to see inside where there are paintings by the renowned Lucas Cranach., and stained glass windows from the 13th century.

We walk around Albrechsburg, a palace built between 1471 and 1500 by Duke Albrecht of Saxony that dominates the city and the beautiful historic square.

After our brief walking tour with our guide, Brigetta, we are taken by bus to the Meissen “manufactory,” where you go room by room to see demonstrations of the remarkable artistry and craftsmanship that goes into making these porcelain treasures.

It is remarkable to realize that they have been doing this very same thing for over 300 years, the oldest porcelain manufactory in Europe, founded in 1710 by King Augustus the Strong, who put together a team of physicists, alchemists and metallurgists to come up with the new technology. There’s also a museum with some 2,000 Meissen items.

Back on the ship, we sail from Meissen through the late afternoon and overnight to Wittenberg.

We are always a stone’s throw from shore. We sail by people’s backyards and front yards, close enough to exchange greetings. Bicyclists keep pace and even go faster than boat, as they ride along a path beside the water. I see one man on horseback as the sun goes down. The scenery is beautiful, and the cruise so peaceful.

Dinner this evening is spectacular, beginning with an olive paste on toast, salmon with cheese, filet mignon, goat cheese with salad, raspberry/cream pie.

We cruise overnight to Wittenberg.