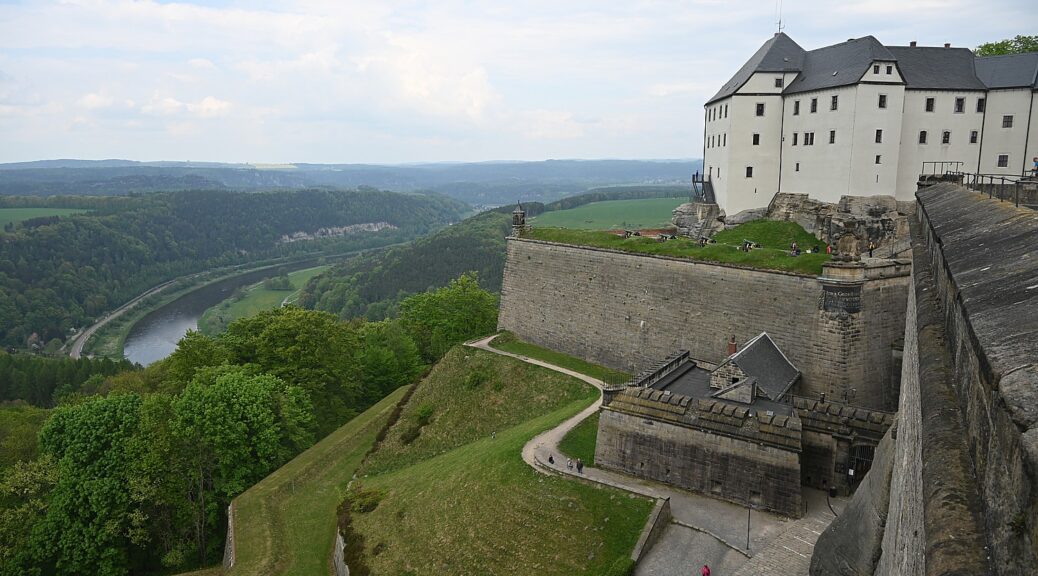 We get our first glimpse of Konigstein Fortress, perched on a 24-acre rock plateau high on a hilltop, 240 meters above the river, as our ship, CroisiEurope’s MS Elbe Princess, sails past. It is formidable. Known as the “Saxon Bastille,” it is Germany’s largest fortifications and one of the largest hilltop fortifications in Europe. It was never conquered and never invaded (though our guide tells the story of a local teenager who managed to “invade” the fortress by scaling the walls; he was initially taken into custody but released after they could not find a law to charge him with breaking, and he became a local hero).

The fortress is a complex of more than 50 buildings, some more than 400 years old, including a dramatic medieval castle, with ramparts that run 1,800 meters and walls up to 42 meters high, which for centuries was used as a state prison (political prison). The fortress has been an open-air, military history museum since May 29, 1955, and is now one of Saxony’s foremost tourist attractions, visited by 700,000 a year. ((I keep thinking it should have been used in a James Bond movie).

100 million years ago, this place would have been at the bottom of the ocean, our guide, Gerold Jahn, tells us. Now, because it is the highest perch, there are lightening conductors everywhere (100 years ago, three tourists were killed by a lightening strike) and there is a safety talk and posters.He takes us to his favorite views of the Elbe Valley and villages well below.

The fortress is a complex of more than 50 buildings, some more than 400 years old, including a dramatic medieval castle, with ramparts that run 1,800 meters and walls up to 42 meters high, which for centuries was used as a state prison (political prison), and is now one of Saxony’s foremost tourist attractions, visited by 700,000 a year. ((I keep thinking it should have been used in a James Bond movie).

Originally, there was a monastery here, which was closed after Luther’s Reformation. It took 40 years to build the fortress, beginning 1580 until 1620, just after the start of the Thirty Years War (half of all Saxony people died in that war). The fortress was built to be invincible, though in fact, it was not built for defense, but as a refuge for the townspeople, scientists, and government.

It was designed as a refuge (Dresden is 28 km away) to accommodate as many as 4000 people (the fewest number of full time residents is 40, the present number of permanent occupants). Peak occupation was during the Seven Years War, in 1756.

What I find most fascinating is how they solved all the problems – water, food and sanitation – to make this place totally self-sufficient (not just impenetrable). The secret to its steady supply of water is a 152.5 meter deep well, which is the deepest in Saxony and second deepest well in Europe – and the key to how this fortress was made to withstand any kind of siege. We get to see how it was built by local miners over a four-year period. The well is fed by rain that filters through the soil over a period of 6 to 7 months (they calculated) and naturally refills and could not be poisoned by an enemy. They devised a system to a 130-liter barrel into the well to collect the water.

Also, every household had a patch of land and was expected to cultivate their own food. The fort has a self-sufficient town with its own butcher, bakery, brewery, hospital and treasury. Even today, young children attend school at the fortress and older ones are picked up by bus.

The fortress was used to protect the Saxon state reserves and secret archives during times of war. In 1756 and 1813 and during World War II, Dresden’s art treasures were also stored at the Königstein.

Its main function since the 17th century was as a prison. Some of the more notable prisoners incarcerated at Königstein (likely after secret trial) include: the Crypto-Calvinists, including Caspar Peucer (1574–86) and Nikolaus Krell (1591–1601), chancellor of the Electorate of Saxony; Johann Friedrich Böttger (1706–1707), co-discoverer with Tschirnhaus of European porcelain; Count Karl Heinrich von Hoym (1734–1736), cabinet minister of the Electorate of Saxony; committed suicide in his cell; Mikhail Bakunin (1849–1850), Russian anarchist and revolutionary; Thomas Theodor Heine (1899), caricaturist and artist and Frank Wedekind (1899–1900), writer and dramatist.

The fortress was never bombed during World War II, even though nearby Dresden was famously destroyed, That is because it was known not to be a military base but rather, American, French and Polish POWs (mainly officers) were kept here. “They were kept in very humane conditions – one day a week they could leave to hike,” Gerold tells us.

The fortress was considered impregnable – “The only way prisoners left was when their dead bodies were thrown over the wall” – but there is a famous legend of the daring escape of a French general Henri Giraud, who was kept here 1940-1942.

“We never knew how it happened. One theory was that he was smuggled little pieces of rope that he joined together until he had 45 meters, repelled down, and that a special agent met him at the bottom with clothes, false passport and he escaped to Switzerland. Another theory is that he had inside help and the Germans wanted him to escape because Giraud was an enemy of DeGaulle and if was free, there would dissention. The French claim it was Resistance who helped him. But after only two years, he died in airplane crash in North Africa.” (I’m thinking, murder???? What a film!)

In May 1945, the 20 soldiers (more like police) here waved a white flag to welcome the Russians. “They came with art experts. The Soviets confiscated the art, but when Stalin died in 1953 and Khruschev wanted to have détente, they and gave back the art.”

“It is a masterpiece of engineering, of architecture,” Gerold, who has a background in civil engineering, tells us.

I am grateful that we have about 40 minutes to explore on our own, and I go into a marvelous exhibit about the history of this place and this area housed within the castle (a treat to see inside).

We walk down from castle the through the four gates (coming up, we used the modern elevator). Really wonderful.

Back on the ship, we sail on to Dresden.