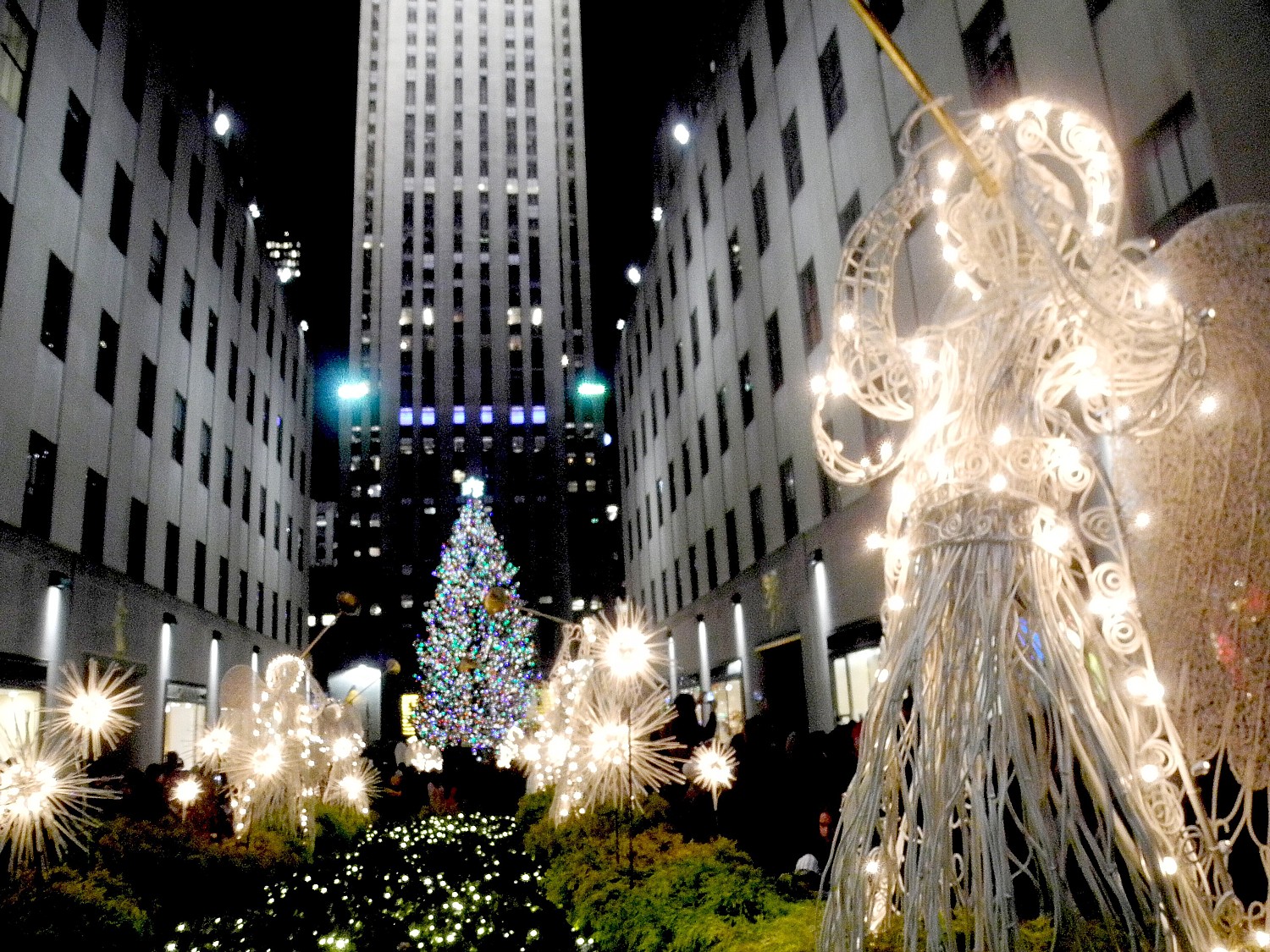 New York City’s most magical time of the year, the winter holiday season, is already underway with the annual Macy’s Thanksgiving Day Parade, continues with the iconic Christmas Tree lighting ceremony at Rockefeller Center, and constantly delights with festivals, special events and attractions, and all the dazzle of holiday decorations right through New Year’s Day.

Throughout the season, each of the city’s five boroughs welcome multicultural guests to participate in local observances of diverse holidays. Secular activities include unforgettable department store windows, artisanal markets to explore, plus attractions and cultural draws. The season concludes by welcoming in the New Year with lesser-known fireworks at Prospect Park in Brooklyn and, of course, the unforgettable New Year’s Eve ball drop in Times Square.

Here’s an overview of what to see and do by borough:

The 91st Macy’s Thanksgiving Day Parade—featuring larger-than-life helium balloons, performances by the casts of Broadway musicals, select marching bands from across the nation and celebrity appearances—kicks off the holiday season on November 23. (macys.com). (Macy’s iconic Thanksgiving Parade that kicks off the winter holiday season actually starts the night before, with a gigantic blow-up event that has become a major festival experience, drawing tens of thousands of onlookers on the streets around the American Museum of Natural History and Central Park West. This year, the event takes place from 1-8 pm; entrance is at 74th Street.)

The Rockettes high-kick their way into the festive season, as the Christmas Spectacular Starring the Radio City Rockettes returns November 10–January 1. The production dazzles audiences with extravagant costumes and fan favorites. Of note, families should mark their calendars for November 26, the inaugural Party City Kid’s Day, featuring pre-show activities to enthrall kids of all ages (rockettes.com).

November 30–January 5, the annual Brookfield Luminaries experience in the Winter Garden at Brookfield Place is reimagined. From 8am–10pm daily, visitors can “send” a wish from one of three stations to the canopy of hundreds of lanterns above, transforming the wish into a mesmerizing display of colors (brookfieldplaceny.com).

The New York Transit Museum Gallery Annex and Store at Grand Central Terminal is back with its 16th Annual Holiday Train Show. Lionel trains travel through a two-level, 34-foot-long miniature New York City and countryside scene. Vintage trains from the museum’s collection travel to the diorama’s North Pole from November 16 to February 4 (grandcentralterminal.com).

Louis Vuitton presents Volez, Voguez, Voyagez – Louis Vuitton October 27–January 7 at the former American Stock Exchange building in Lower Manhattan. Curated by Olivier Saillard and designed by Robert Carsen, the free exhibit retraces the adventure of the House of Louis Vuitton from 1854 to the present. One of the show’s 10 chapters is entirely devoted to the United States and New York City. (vvv-new-york-louisvuitton.com)

Holiday favorite ELF The Musical is in performance at the Theater at Madison Square Garden for a limited engagement. Back by popular demand, the production runs December 13–29 (theateratmsg.com).

The Metropolitan Opera presents a family-friendly holiday extravaganza, The Magic Flute. Directed by Julie Taymor (The Lion King), the abridged English language presentation is a great introduction to opera for children. Additionally, those attending the December 29 and 30 performances will be invited to participate in activities, including opera-themed “dress-up” and “show-and-tell” (metopera.org).

The Metropolitan Museum of Art once again lights a 20-foot blue spruce above an 18th-century Neapolitan nativity scene, in the museum’s Medieval Sculpture Hall. The Exhibit of the Crèche is a long-standing holiday highlight for New Yorkers and global visitors and is available to view November 21–January 7 (metmuseum.org).

Visitors can enjoy one of the City’s many outdoor skating rinks that open in October through the holiday season, such as the Rink at Rockefeller Center (therinkatrockcenter.com), Wollman Rink in Central Park (wollmanskatingrink.com) and Bank of America Winter Village at Bryant Park (wintervillage.org). The Rink at Brookfield Place opens November 1 (gpice.com).

The New York City Ballet presents George Balanchine’s The Nutcracker, one of the most beloved and anticipated holiday classics, November 24–December 31 at Lincoln Center (nycballet.com).

Other favorite venues to get into the Christmas Spirit: Bryant Park, with its massive Christmas tree, ice skating rink, festive holiday markets, cafes, and carousel (wintervillage.org) has become one of the city’s iconic holiday places.

Besides Bryant Park, there are holiday markets at Union Square, Columbus Circle, and Grand Central Terminal.

Central Park is magical in any season, but particularly for the holidays. In addition to the Wollman Rink (wollmanskatingrink.com), there is The Swedish Cottage, an enchanting place that is home to one of the last public marionette companies in the country. The cottage was originally constructed as a model pre-fabricated schoolhouse, and became Sweden’s entry in the 1876 Centennial Exposition in Philadelphia. After the exhibit, Central Park’s co-designer Frederick Law Olmsted had it placed in Central Park, where it has been headquarters for the Marionette Theater since 1939 (West Side at 79th Street). Currently playing is The Three Bears Holiday Bash, through Dec. 30 (purchase tickets, www.cityparksfoundation.org/arts/swedish-cottage-marionette-theatre). Ticket packages are available that include holiday workshops (geared to 3-8 year olds accompanied by adult): Monday, December 11 – Decorate a Dreidel, Dreidel, Dreidel; Friday, December 15 – Christmas Elf Stick Puppets; Friday, December 29 – Kwanzaa Stick Puppets.

Visiting St. Patrick’s Cathedral on Fifth Avenue is a highlight of the holidays and it is remarkable that you can just walk in and enjoy an inspirational service, but a particularly favorite place is St. Thomas Church (5th Avenue and 53rd Street, www.saintthomaschurch.org), which is famous for the Saint Thomas Choir of Men and Boys, and its annual performances of Handel’s Messiah (Dec. 5, 7). Also this year, “A Ceremony of Carols” by Benjamin Britten (Dec. 14). (Purchase tickets, www.saintthomaschurch.org/music/concerts); also take a tour of this magnificent edifice, built in 1913 in the French High Gothic style.

Families can enjoy making special holiday-themed crafts during the Holiday Workshop Weekend at Wave Hill, December 9–10 and can take home their very own natural wreaths, treasure boxes and other great keepsakes (wavehill.org).

In Downtown Brooklyn, the Brooklyn Ballet’s Nutcracker is an iteration of the holiday classic. It fuses ballet, hip-hop and various dance genres, plus reimagines Nutcracker characters and scenes to represent Brooklyn neighborhoods, such as Old Dutch Brooklyn and Flatbush Avenue. Performances are December 7–9, 11 and 13–16 (brooklynballet.org).

In Park Slope, Grand Army Plaza hosts nightly lightings of the Largest Menorah (32 feet tall) from December 12 to 19 during Hanukkah. A must-see in this location since 1984, there are concerts, gifts for children and celebrations each day through the festival of lights (largestmenorah.com).

The Gingerbread Lane at New York Hall of Science is open from November 11 to January 14. Hopeful for the fifth straight title of Largest Gingerbread Village from Guinness World Records, over 1,000 handmade gingerbread houses and structures are on display (nysci.org).

The tradition continues with A Christmas Carol at Queen’s Theatre. Scrooge and the Spirits of Christmas past, present and future are in residence in the borough December 8–22, thanks to Charles Dickens and Titan Theatre Company (queenstheatre.org).

The first ever Winter Wonderland SI at Richmond County Bank Ballparkwill feature ice-skating, rides, games, a 34-vendor holiday market and more. Conveniently located steps from the Staten Island Ferry. At dusk each evening, there is a holiday light and sound show, and the Igloo Bar is a draw for adult attendees, featuring holiday cocktails and live entertainment (winterwonderlandsi.com).

Midtown NYC showcases the “new” NYC and this holiday season is an ideal time to experience new attractions:

Gulliver’s Gate, housed in the former New York Times building on West 44th Street between Seventh and Eighth Avenues, features over 300 miniature buildings and models of iconic global landmarks. A full city block wide, the attraction is a technologically advanced, interactive and immersive world that ignites the imagination of visitors young and old (gulliversgate.com).

National Geographic Encounter: Ocean Odyssey , which opened in October, is an immersive experience in Times Square (West 44th Street, between Seventh and Eighth Avenues) that uses ground-breaking technology to transport guests on an incredible underwater journey across the Pacific Ocean (natgeoencounter.com).

Beginning in November, NFL Experience Times Square, a new attraction on the corner of 47th Street and Seventh Avenue, immerses visitors in the physical challenges of professional NFL athletes. Visitors enter as a fan, become a player and leave a champion on this hero’s journey (nflexperience.com).

New Broadway musicals will entertain guests over the holiday season. Visitors can see all current and upcoming shows at nycgo.com/broadway. Highlights include SpongeBob, sure to be a hit with families and nostalgic millennials alike, and The Band’s Visit, an artistic new work starring Tony Shalhoub, among others (spongebobbroadway.com, thebandsvisitmusical.com).

In celebration of the holiday season, this short video produced by NYC & Company captures the City’s festive essence. For a full holiday guide to NYC and more information about booking a trip to NYC this holiday season, visit nycgo.com/holidays.

The holidays are a perfect time to see a show. Broadway performs every day of the week at multiple curtain times to accommodate every schedule, including holidays. During Thanksgiving and Christmas weeks, some shows are changing their performance schedules.

“During the most wonderful time of the year, theatergoers can rely on Broadway to help them celebrate by fitting a show into their holiday plans,” says Charlotte St. Martin, President of The Broadway League. “With special matinees and evening performances, Broadway provides many additional opportunities to see a production. From comedies to dramas, old favorites and new, there are so many choices that there’s something for everyone throughout the Thanksgiving and holiday weeks.”

During Thanksgiving week, some shows will play on Thanksgiving Day, and many will play Friday matinees. Fourteen shows will be playing on Christmas Day! During Christmas week, alternate curtain times will also include Friday matinees and evening performances. Check Broadway.org to see the holiday performance schedules and easily find out where and when shows are playing.

2 thoughts on “Holidays in New York, The Most Enchanting Time of the Year”