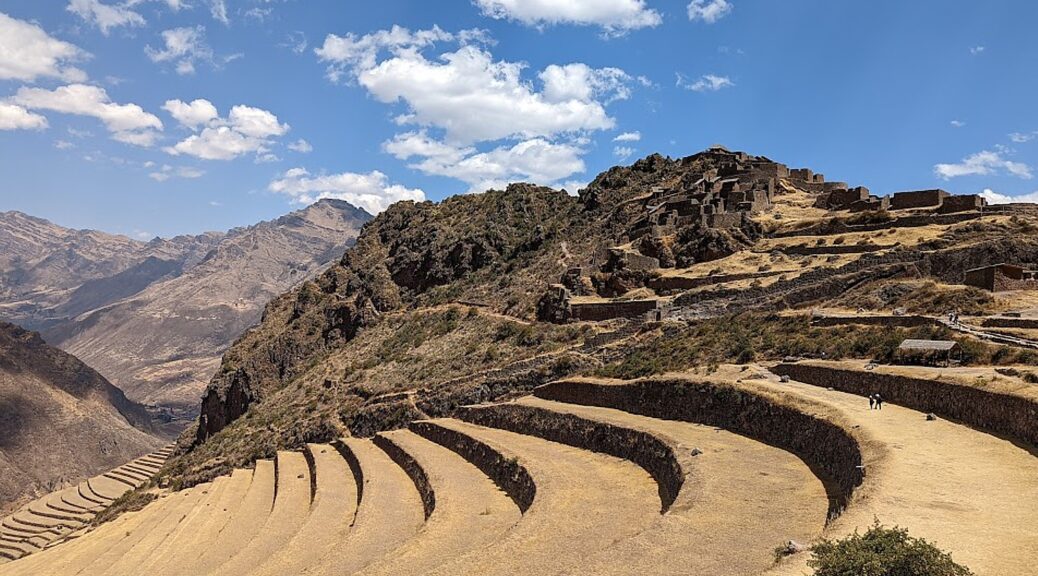 The Incan ruins at Pisac in Peru’s Sacred Valley, are our first introduction on this one-day Alpaca Expeditions tour to the massive scale of Incan building projects. Though there were settlements here before (there were two other major empires before the Inca), who built terraces, but after the Inca emperor Pachacuti conquered the area in the mid 1400s, he ordered the building of a large complex covering 162 acres, on the mountain.

Pachacuti (who also built Machu Picchu, our ultimate destination on Alpaca Expeditions’ four-day/three-night Inca Trail trek) built Pisac as a multi-purpose residence, citadel, observatory and religious site – a secluded royal retreat outside of Cusco where he and nobility could “relax” between military campaigns, undertake ritual and religious ceremonies and be a defensive refuge.  Francisco Pizarro and the Spanish conquistadors destroyed the Inca complex in the early 1530s.

In fact, it seems most of what we associate with the Incan Empire came under the rule of Sapa Inca (paramount leader) Pachacuti-Cusi Yupanqui, whose name meant “earth-shaker”. Beginning in 1438, he and his son Tupac Yupanqui began a far-reaching expansion that brought much of the modern-day territory of Peru under the ruling Inca family control.

At the time of the Spanish conquest, the Incan Empire extended 3,000 miles, connected by an elaborate network of roads, and had built these monumental structures at Cuzco, Pisac, Ollantaytambo  and Machu Picchu– without the benefit of draft animals like the horse, the wheel, iron or steel tools, written language or currency.

How was that possible?

Our Alpaca Expeditions guide Jaime explains how the Incan society was organized – its principles of labor and work.

“Taxes” consisted of a labor obligation of a person to the Empire – each man had to devote three months of the year in service either building the Incan monumental structures or in military service. The Inca rulers (who theoretically owned all the means of production) reciprocated by granting access to land and goods and providing food and drink in celebratory feasts for their subjects.

“The Inca had three layers of labor,” Jaime tells us: Anyi (reciprocity); Minka (communities work together) and Mita (a labor tax, where every man had to do two to three months of service to the government or serve in the military each year). By combining their political authority with religious authority, the people impressed to build temples and palaces did it out of devotion.

Societal behavior was governed by three moral precepts: Ama sua: Do not steal; Ama llulla: Do not lie; and Ama quella: Do not be lazy.

How long would it have taken to build Pisac? Jaime says that each ruler would have designated his own project that had to be completed in his lifetime and not left to a successor (which is why most of these sites we see were not finished).

At the high point of Pisac, 3,594 meters (11,791 feet elevation), there is a watchtower, from which guards would have sent and received messages by blowing a conch. It might announce that the Inca king was coming and to be ready, or a threat.

The Inca worshipped the mountain and the rocks, and would integrate the structure into mountain contour, building on top of the bedrock.

Jaime explains how the terraces were built – how they would build from the bottom, to the stone wall, digging a couple of feet into the ground, use a tree as a lever, filling three layers of material – soil-gravel-big stones – so that the water would drain to the lower terrace. They used a rudimentary tool – a long stick with a stone or metallic point, and one man would use it like a spade and a second would turn the soil over.

The Inca family was “pure”, but could name a non-Incan as chief. Someone could ascend to noble rank if they had a skill. An Incan ruler would have an official wife who would also be Incan, and only her children would inherit, but he could have as many concubines as they liked, and would have dozens of children.

“It was a very organized (and controlled) society.”

At another overlook, we see where some 3,000 holes have been made in a cliff – created by grave robbers. At this site, people were buried in caves with their belongings so they would have them for the next world. The king and nobles, though, were mummified and put into a mausoleum.

We also see the remains of pre-Incan cliff dwellings. “They were afraid of cannibals” who believed they could ingest their victim’s power. “It was practiced until the mid-1800s.” Also, 1000-2000 years ago, there more wild animals and the people lived in cliffs to be safe.

We drive down into the town of Pisac which was built in the valley below the ruins by Viceroy Toledo in the 1570s, where Eric has found a local Andean restaurant online for lunch.

Pisac is famous for its market. Official market days are Tuesday, Thursday and Sunday filling the Plaza Constitución but the market is biggest on Sunday when indigenous Quechua communities from the surrounding area come to town to sell their produce and stock up on supplies for the week. We have very little time to explore the market. (We need to be back in Cuzco at 6 pm for our mandatory orientation for the Alpaca Expeditions trek to Machu Picchu.)

We would also have liked time to visit the museum, Comunitario de Pisac, which opened in 2009 with exhibits on the production of ceramics and the traditional textiles produced by local Quechua communities. A room is dedicated to the Incan presence in the area covering its development from the archaic period (7,000 to 800 BC) to the period of imperial expansion of the Inca state (1400 to 1535). The museum includes a graphical presentation of the various areas of the imperial city, as well as various ceramic objects and remains (including Incan mummies).

After lunch, we drive 1 ½ hours further to Ollantaytambo, a fascinating and massive Incan site built during the Inca’s heyday which provides an excellent preview of what we will experience at Machu Picchu. Here, we see rock formations representing the Incan god, Wiracocha (the god of creation), and the Church of St. James on top of Inca site.

The large boulders, 40-50 tons each,  were so finely finished with curved and convex edges and placed, indicate that this structure would have been the temple; boulders that are basically piled up show that it was never finished. He points out the slight angle of the wall – meant to for stability in the event of an earthquake.

“They believed rocks were beings,” Jamie says. “From the quarry to the structure they may whip the rock (and not the person).“ He says that at the quarry, there would have been a model of the structure they were building in ceramic or stone and most of the carving would have been done there, where there was more room, the finishing touches would be done at the site. We see in the distance where there two quarries that supplied the stones, and walk over the terraces for growing potato, a staple food.

At the Temple of Water, we see how the Inca used water for irrigation as well as for drinking. The window opening was cut to align with the solstice, and water, diverted from the river, would be directed back into the channel.

I was concerned that I was huffing and puffing climbing around the site – realizing this was part of my acclimation to the altitude but anxious that it did not bode well for the Inca Trail trek we would be starting the next morning. I half imagined the Alpaca Expeditions guide telling me I wasn’t suited for the trek. But we pressed on.

You could easily spend 2-4 hours here – there is so much to explore – and then spend time in the gorgeous market in the absolutely charming village with its hardware stores, kitchen and home supplies. But we have to rush back – it’s about 3 hours drive back to Cuzco – to get to our mandatory 6 pm orientation at Alpaca Expeditions’ offices for our Inca Trail trek.

The next morning, when our bus taking our group to the start of the Inca Trail trek stops here in this very village to pick up a couple from their hotel here, we realize we could have organized it differently – done the orientation the night we arrived and stayed overnight Ollantaytambo in a hotel so we could have had more time to really enjoy the site and the village. (In this scenario, we still would have left our luggage back at the Amaru Inca hotel in Cuzco where we will return after the Inca Trail to Machu Picchu trek, and just had with us what we were taking on the trek. Also, instead of getting picked up at 4 am, we would have been picked up here at 6 am.)

It is also possible to combine a stay in Ollantaytambo with Machu Picchu without doing the four-day Inca Trail trek. Alpaca Expeditions has various tour options with shorter or no hiking.

The permits to do the Inca Trail trek are limited to 500 a day for all the trekking companies and get booked up months in advance.

Next: Trekking the Inca Trail to Machu Picchu

DAY 1 ON THE INCA TRAIL TO MACHU PICCHU: A TEST

DAY 3 ON THE INCA TRAIL TO MACHU PICCHU: TOWN IN THE CLOUDS, TERRACES OF THE SUN & FOREVER YOUNG

DAY 4 ON THE INCA TRAIL: SUN GATE TO MACHU PICCHU, THE LOST CITY OF THE INCAS

One thought on “Incan Sites of Pisac, Ollantaytambo in Peru’s Sacred Valley are Preview to Machu Picchu”