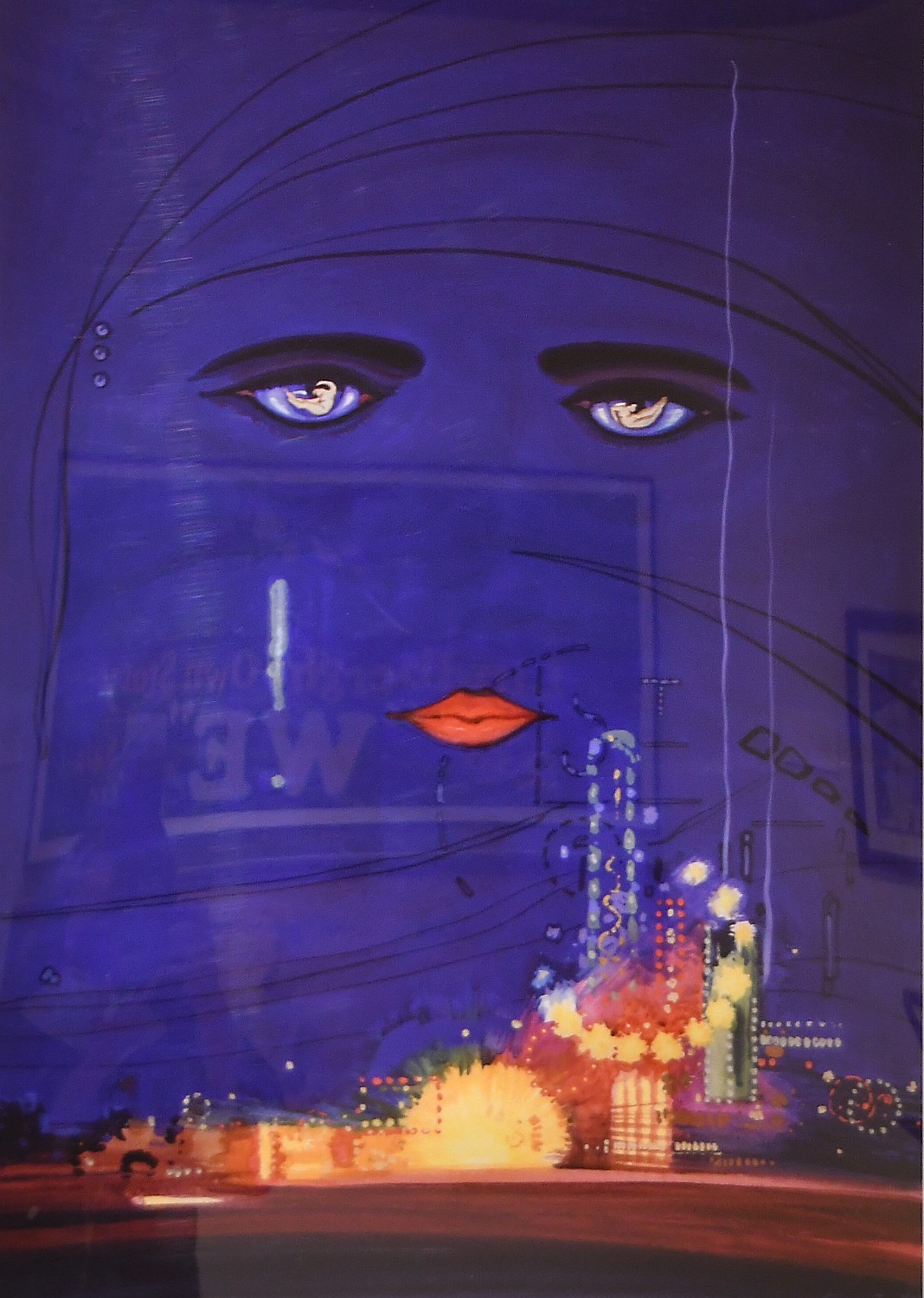 What is most remarkable about the new exhibit at the Nassau County Museum of Art, “Anything Goes: The Jazz Age” celebrating the Roaring Twenties, is the cross-connections between art, music, literature, design, furniture and fashion, and the people who were similarly cross-pollinating these cultural categories. There is a drawing by George Gershwin, another by ee cummings, the original painting by Francis Cugat (brother of Xavier, the musician) that F. Scott Fitzgerald wrote into his iconic novel, “The Great Gatsby” and had to have for its cover (and has never before been seen outside the Princeton University Library).

There are the Park Avenue Cubists, and the clique that gathered at Gerald & Sara Murphy’s beachhouse in Antibes (Sara, a famous Jazz Age muse, is the subject of a little-known Picasso drawing of her on the beach at Antibes). One room of the fantastic Frick mansion that is now home of the museum is devoted to Jazz Age music, with gramophones and Victrolas and radios that show off the design, while early records from the collection of Dr. Jay Tartell play. Even fashion and jewelry design (Tiffany is represented).

There are so many astonishments as you go through – James Joyce’s “Ulysses” was censored and burned but here in a bookcase is one of the first editions, along with a copy of F. Scott Fitzgerald’s “This Side of Paris,” based on Hobey Baker, a World War I flying ace and Princeton hockey star and in a gallery, the original Hobey Baker Memorial Trophy.

In this extraordinary multimedia exhibit, you are immersed in the masterpieces and experiments of a generation that changed the history of Modernism. The giants among the artists – Picasso, Léger, Matisse, Beckmann, Nolde, Lachaise, Man Ray, Stuart Davis, Florine Stettheimer and Tamara de Lempicka – are all represented in the show with major works, but there are so many artists – particularly women artists – who will be new for many like Anna Walinska, a teenager from Brooklyn who lived in Paris during the ‘20s and met Picasso, Matisse, Stein and others while making the drawings and paintings which are on view in a solo gallery in the show.

The exhibition tracks the progress of Modernism in art from Cubism to Neoclassicism. Composers such as Gershwin and Porter were taking syncopation and the blues to new heights at this time, and their records, sheet music, and piano rolls are on view and are heard throughout the show on ’20’s-era turntables and player pianos.

The Ballets Russes, for whom Picasso and Chanel designed productions, broke all dance conventions and inspired a new wave of fashion, with examples in the exhibition curated by noted expert on ’20’s fashion, JoAnne Olian. The exhibit’s pieces of Art Deco furniture and rare jewelry from the private collection of the Macklowe Gallery display the machine-age elegance that was in vogue.

“We’re used to Cubism today, but these guys were brave,” museum director Charles A. Riley II, who organized the show, said at the opening reception.

The show ties all the cultural strains together so you almost see the creative pollination from one discipline to another, all in an expression of a philosophy that defined the Jazz Age: “Living well is the best revenge” was the motto of an extraordinarily fortunate generation, anything but “lost,” that remains today the epitome of sheer creative freedom.

Riley noted that though a sense of artistic “freedom” and breaking social and cultural conventions was the theme of the Roaring Twenties, it was “freedom plus order.” Lindbergh’s flight across the Atlantic to Paris that so inspired the sense of adventure and daring, was also an exercise in discipline.

The show offers a comprehensive picture of the Jazz Age when World War I ended on November 11, 1918 and ended on October 24, 1929, when Wall Street crashed after its historic nine-year bull run. The commentaries and notes that accompany the exhibit are fascinating insights to the context for the creations and the people propelling them.

In addition to art and design, the exhibition brings the age of superstars vividly to life with memorabilia celebrating the Golden Age of aviation, including a leather pilot’s helmet and goggles, photographs of Babe Ruth and a seat from the original Yankee Stadium built in 1923, original Victrola turntables and the first generation of radios, first editions of monumental novels and sheet music, and the original Hobey Baker trophy, the top honor for American college hockey (all players who visit wearing their team jersey during the run of the show will be admitted for free).

As Riley, who donned his own Princeton hockey jersey, noted, Hobey Baker’s life was worthy of a movie – a World War I flying ace, at the end of the war he would likely have headed to Wall Street; he took one last flight which proved fatal.

The exhibition unveils some important historical discoveries, including previously unknown drawings by the poet cummings that were found by his dear friend Gaston Lachaise. Their friendship and collaboration is celebrated in a gallery that includes many of Lachaise’s greatest sculptures, including a monumental cast of “Elevation,” as well as his own drawings and a stunning portrait by cummings of the legendary supermodel Marion Morehouse.

A fortunate group of American artists and writers in Paris during the ’20s, many of them in Stein’s circle, were pioneering a new style of abstraction, and the show boasts some significant canvases by Davis, as well as Charles Green Shaw, Gertrude and Balcomb Greene, Joseph Stella, Carl Holty, Jan Matulka, Charles Biederman and an unknown work on paper by Betty Parsons, who would become best known as one of the great champions of Abstract Expressionism.

In another art historical coup, the show presents an unknown drawing by the model and muse Kiki de Montparnasse that had been hidden among the papers of Man Ray, whose portrait of Kiki is among the treasures on view, along with his portraits of Hemingway, Chanel, James Joyce and dancers from the Ballets Russes. The other major photographic finds in the show are by Carl Van Vechten, whose lens captured the jazz greats in Harlem nightclubs. The show also boasts an unknown drawing of Baker by the artist Paul Colin, whose posters, including rare examples included in the show, made her famous in Paris.

“When I play hockey, I leave it all on ice,” Riley said, wearing his hockey jersey.”This show is everything I’ve got – my heart and head. All laid out.”

Throughout the exhibit, there are fabulous photographs of these key figures that put you right into the moment.

The Long Island connections in the show are among the highlights. F. Scott Fitzgerald published  “The Great Gatsby” on April 10, 1925, but he started it two years before over the garage in a rented house in Great Neck. In his lecture, Scribner III, whose grandfather published the novel, will reveal the backstory of its progress from manuscript to masterpiece under the editorial guidance of Maxwell Perkins, who secured the iconic cover by Cugat. And Lindbergh took off from the storied air strip at Roosevelt Field, where Elinor Smith, the “Flying Flapper of Freeport,” set new records for altitude and endurance.

Indeed, the local connections are also in the collectors who have loaned to the exhibit, including Dr. Jay Tartell and Deborah Tartell who not only loaned the stunning gramophones, phonographs and victrolas, but also that sensational photo and autographed program of George Gershwin; and Dr. Harvey Manes, a trustee, who loaned several works.

Drawing on museum, university and private collections, including those of the Heckscher Museum, Parrish Museum, Cradle of Aviation Museum, New York University Grey Art Gallery, and Princeton University, the wide-ranging exhibition has been underwritten by the Americana Manhasset and Wheatley Plaza, longtime supporters of the museum and its mission.

In addition, the programming and publications have been sponsored by generous gifts from The Ritz-Carlton Residences and by Charles Scribner III. Each week the show will feature special programming, including live jazz in the beautiful paneled library of the mansion, lectures by experts in the arts and design, and live demonstrations of the player piano and Victrola in addition to the museum’s renowned docent-led tours and education programs.

Among the programming highlights are a May 12 lecture by Scribner, a popular speaker at the Morgan Library and Metropolitan Museum of Art, among other venues; an original cabaret musical based on the lives of Scott and Zelda Fitzgerald composed and performed by Angela Sclafani and her ensemble; and tours of Jazz Age Manhattan led by museum director Charles A. Riley II, author of two books on the period. The museum is publishing a fully-illustrated catalog of the exhibition with essays on the art, music and fashion of the era, and is re-launching the official website with special features keyed to the show.

This year’s gala ball on June 9 will be themed “All That Jazz” with guests in costumes, Angela Susan Anton, Board President, announced.

The Nassau County Museum of Art is located at One Museum Drive in Roslyn Harbor and is open Tuesday through Sunday, 11 a.m. to 4:45 p.m. Admission is $12 for adults, $8 for seniors (62 and above) and $4 for students and children (4 to12). Members are admitted free.

For more information about the museum and exhibit, call 516-484-9338 or go to www.nassaumuseum.org.