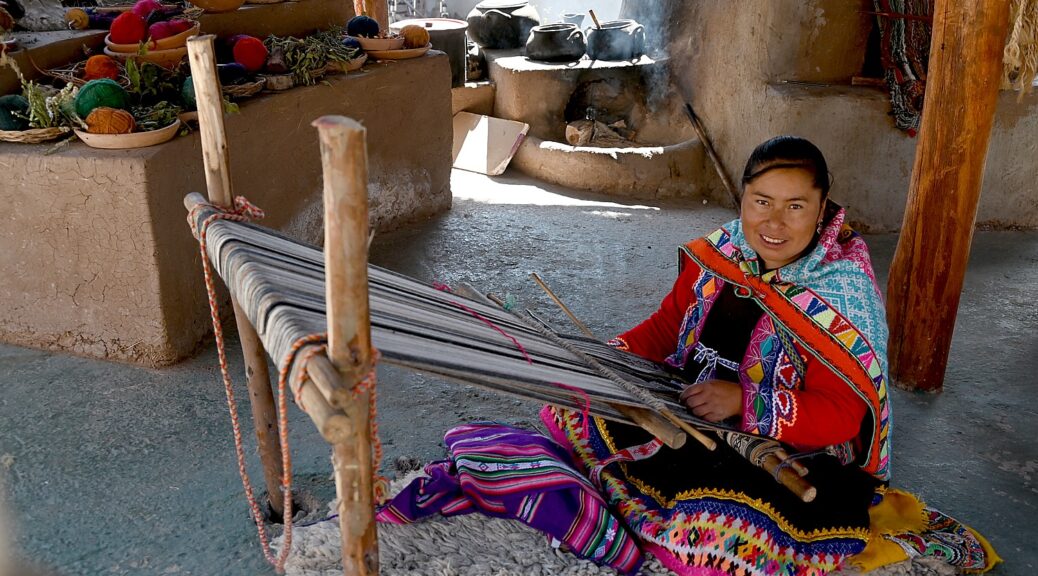 We prepare for our Alpaca Expeditions four-day/three-night Inca Trail hiking/camping trek to Machu Picchu by spending an extra day Cuzco and the Sacred Valley – the absolutely best way to begin to acclimatize to the high altitude before the trek, which goes up to nearly 14,000 feet. This is the best way to avoid debilitating altitude sickness, but also to lay the foundation for appreciating what we will see and experience along the trail.

While it would be best to have arranged two or three days to acclimate before the trek – which would also provide more time to visit the extraordinary sights in Cuzco, Pisac and Ollantaytambo – having come from a week in the Galapagos for this grand finale to Eric and Sarah’s six-month odyssey, we only have one full day before starting out on the trek, so Alpaca Expeditions’ one-day Sacred Valley tour is ideal.

Our guide, Jaime, picks us up at 8 am our charming boutique hotel, the Amaru Inca (Cuesta San Blas, 541, Cusco City Center, Cusco, 84) which must once have been a hacienda, and we set out in private car into the countryside, where we immediately see neighborhoods, villages and communities.

The road begins its twisting rise into the mountains and Jaime stops just before the Sacsayhuaman fortress at a point where we are level with Cuzco’s most famous monument, the statue of Christo Blanco with open arms that overlooks the city. Eight meters high, it was created by Cusco sculptor Francisco Olazo – a gift from Palestine in 1945 – and a mini version of Rio’s statue. From here, the Cathedral and churches and Spanish-style buildings are most prominent.

“There is nothing like Cuzco in any other part of South America,” Jamie says, “for the concentration of people and sites.”  There are some 1,250 sacred sites in Cuzco.

The hostels we stay in today were once homes – first of Inca who began to take over Cuzco in 1000 AD, then rich Spaniards who came in the first century after conquest, in 1536.

The Incan heritage pretty much had to be resurrected, because the Spanish did their level best to eradicate the culture, and especially the religion which was based on nature worship – literally building their palaces and churches on top of Incan palaces and temples -you can still see the foundation stones.

The center square, would have been the city’s market place and where religious ceremonies would have been held, was renamed by the Spanish the Plaza de Armas – the place of arms – where they would have held executions of rebels.

Our guide Jamie explains that the Inca were actually the ruling family – not the people – who basically ruled over some 50 different tribes and city-states, speaking different languages.  Some 20,000 to 40,000 Inca nobility ruled over a population of 10 to 20 million that at its peak, spanned as far as Columbia, Ecuador, Chile and Argentina. The Inca expanded its empire from Cuzco by conquest and “diplomacy” between 1000, reaching its peak in the mid 1400s, 125 years before the Spanish conquest in 1536.

What is so remarkable is the Empire the Inca built – the monumental architecture and 3,000-miles of road network reaching all corners of the empire – was accomplished without the benefit of draft animals like the horse, the wheel, without iron or steel tools, a written language or currency.

How was it possible for a few hundred Spanish conquistadors to conquer the Incan Empire with a population of 20 million? The Spanish seemed to arrive during a perfect storm of turmoil and weakness in the Empire. The Inca Emperor Huayna Capac had died in 1529 after contracting smallpox, that likely came from Maya fleeing south along the roads the Inca built; two brothers were embroiled in a civil war to become the new Emperor.

Atahuallpa, the 13th and last emperor of the Inca, was victorious in a devastating civil war with his half brother, only to be captured, held for ransom, and then executed by Francisco Pizarro.

The tribal people were not motivated to battle the Spanish invaders. Many were happy to be rid of the Inca rulers and allied with Spaniards (“The Inca weren’t very nice,” Jamie says), and for some, the Spaniards seemed to be the incarnation of the priests’ prophesy of Armageddon and to have superhuman power. The first group of 90 Spaniards arrived in Cuzco in 1533 in Cuzco and lived together with Cuzco population for three years; a second, larger, more militant group came in 1536, determined to take the Inca’s gold and silver and forcibly replace the indigenous religion based on nature worship, with Christianity.

The Spaniards intentionally built their churches and palaces on top of the Incan temples and palaces and did whatever they could to eradicate the pagan religions. (Some continued to observ  their religious rituals in secret – even up to modern day and as recently as 15 years ago would practice secretly. Today people openly practice. “The church knows our religion was respecting nature,” Jamie says.)

The Incan leader Manco realized the Spaniards weren’t leaving, so rose up against them, but the Incan weapons were no match.

After the third battle, the indigenous population abandoned Cuzco and the Spanish took over their properties.

If the Spaniards would have come 50 years later, Jaime says, the Incan Empire may have taken over Mexico and been powerful enough, unified enough to drive the conquerors out, he says.

We stop at the Manos de la Comunidad, a handicraft center where we see the different varieties of llama and alpaca, learn about how the wool is produced, the raw materials that the dyes are made from, and watch villagers at their looms, make stunning textiles (there’s also a fantastic gallery, museum and a large store).

This visit provides fascinating insights into the culture and heritage – the human ecosystem that shaped and sustained the Incan Empire – the environment that supports agriculture (enough food and calories to fuel the building of these monumental structures and support an army) and domestication of animals, how the natural materials at hand shaped the culture, and the structure of society.

You realize how critical to the success of the Incan Empire the domestication of llama and alpaca were – they could carry goods, and for producing wool for clothes. Also, the grasses were food for the animals but also used to make the ropes for bridges and hauling the massive stones (I suspect were also used to make the straight lines without the benefit of rulers.)

These finely-woven textiles and the monumental architecture were the main arts of the Incan Empire; instead of written communications they used knotted strings (quipu), which still cannot be deciphered but which (Karen postulates) might have been a kind of Morse code. The colors and patterns of clothes would communicate tribal affiliation, friend or foe.

The Inca’s success at farming had much to do with the fact the Inca calendar was tied to astronomy. Inca astronomers understood equinoxes, solstices and zenith passages and the Venus cycle. Religious leaders –the only others besides the nobles who were educated – used their knowledge as power over the people who were kept ignorant. The priests would use the solstice as if the people’s religious devotion would bring back the longer days. They couldn’t predict an eclipse, but they well understood how it operated.

The Inca also used mathematics to divide up political governance (a system of 10s), assess taxes, keep the census, and to do the calculations necessary to create such monumental architecture.

We also see guinea pigs in cages. These were used for food at important festivals, and even today are served for festivals as well as in restaurants.

But the Inca could not have accomplished what they did – labor, military might – without enough food (calories) to support the population, which is why the Machu Picchu Sacred Valley was so vital.

We stop at a famous overlook known as El Mirador (Lookout Point) from where we can see the Sacred Valley – an abundance of fertile plains in this high area of the Andes – spread out in front of us.

Manco Capac, around the year 1000, claimed to be the “son of the sun god Inti,” sent to earth to become first king of the Inca. He was known for his courage, and taught the people how to grow plants, make weapons, work together, share resources and worship the gods – in other words, set the parameters for the society. Karen suspects Manco was an agricultural genius and that was the source of his power – political and religious – over the people.

Besides military might and a brutal form of “justice,” the Inca ruled through religion – and superstition. Essentially, their religion was based on nature and the different tribes had their own local gods and idols – they worshiped the gods and goddesses of rain, lightning, rainbow (connected with fertility), moon, sea and water. The Inca imposed sun worship of Inti over other cults such as Pachamama (Earth Mother). The people drafted to build their palaces and temples did it out of devotion to god, Jaime says, rather than being impressed into service.

The success of the Inca was in cultivating crops – maize and potato –the domestication of llamas and alpacas as a pack animal and source of meat, wool and rope (the only domesticated animals in pre-Hispanic America), the terraces and irrigation technology.

The elevation of the valley provides the perfect climate for growing corn (maize), so Inca named in Sacred Valley (a golden staff also comes into play). The maize was also used to make a fermented liquor that was used in religious ceremonies, adding to the “sacred” nature of the valley.

The Inca society was a combination of feudalism and socialism. While they did not have currency and technically did not use slaves, instead, the exchange of goods and services was based on reciprocity between individuals and among individuals, groups, and the Inca rulers. Farm production was divided up with 25 percent going to the Inca rulers and nobility, 25 percent to the priests and religious institutions and half kept by the farmers. The Inca rulers (who theoretically owned all the means of production) reciprocated by granting access to land and goods and providing food and drink in celebratory feasts for their subjects.

When the Spanish came, they introduced a feudal system – where the Spanish owned all the land. That persisted up to as recently as 1969, when a socialist (nationalist) president came to power.

“The government bought the land to give to farmers, brought more freedom, and the right to go to school. For the first 15-20 years, it didn’t work well because farmers didn’t know business like the landlord, didn’t have the export connections, and were used to being bossed. The government had to step in, ‘Remember the Inca time’ – and get them to act in as a cooperative. Today, every farmer has his own land. Peru’s biggest export is avocado; its corn is shipped to Japan, Germany and Canada.”

As we drive into the countryside, we see women in traditional dress, we pass markets. Many of the houses – still made of adobe – were swept away in a massive flood and are being replaced with brick structures which do not seem completed (to save taxes?). There is an election underway and we note campaign posters painted on whole buildings.

Before the day is done, we will have a chance to explore the archeological sites of Pisac and Ollantaytambo before making our way back to Cuzco for our 6 pm orientation with Alpaca Expeditions for our Incan Trail trek the next morning.

The permits to do the Inca Trail trek are limited to 500 a day for all the trekking companies and get booked up months in advance.