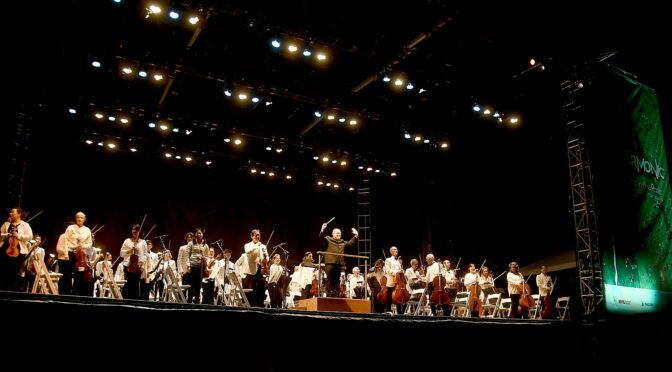 This year’s New York Philharmonic Concerts in the Parks – its 52nd summer – provided a way to say farewell to Music Director Alan Gilbert. The series, presented for the past 11 years by Didi and Oscar Schafer, was a hug and a kiss to the 100,000 music lovers who come out to the free summer concerts (“priceless music, absolutely free”), at the Great Lawn in Central Park, Manhattan; Cunningham Park, Queens; Prospect Park, Brooklyn and Van Cortlandt Park, Bronx. This season’s program was also the Philharmonic’s 175th anniversary season celebration of its hometown, featuring masterworks by Dvořák (Symphony No. 9, From the New World), Leonard Bernstein (Symphonic Dances from West Side Story), and George Gershwin (An American in Paris) — all written in New York and premiered by the Philharmonic  – and was the culmination of its season-long “The New World Initiative”.

Throughout the 2016–17 season, The New World Initiative has explored the New World Symphony’s theme of home and honors New York City and its role as an adopted home. The Philharmonic gave the World Premiere of the New World Symphony in 1893, marking the Orchestra’s first World Premiere of a work written in New York City that would become part of the standard repertoire. The Largo theme was later set to the words “Goin’ Home” by Dvořák’s student William Arms Fisher.

The New York Philharmonic’s free parks concerts have become an iconic New York summer experience since they began in 1965, transforming parks throughout the New York area into a patchwork of picnickers, and providing music lovers with an opportunity to hear the best classical music under the stars. More than 14 million listeners have been delighted by the performances since their inception.

Before the New York Philharmonic takes the stage, it has become a new custom to “Share the Stage” with local musicians. This year, that included BombaYo (Van Cortlandt Park); The Ebony Hillbillies and Zulal (Central Park), The queen’s Cartoonists and Slum Suit (Cunningham Park) and The Side Project (Prospect Park).

And at this year’s concerts in the parks series, audiences joined the Orchestra in community performances of the “Goin’ Home” theme from Dvořák’s New World Symphony, all part of The New World Initiative and the Philharmonic’s 175th anniversary season celebration of its hometown. (Dvořák’s  symphony also incorporates the Shaker hymn, “Simple Gifts.”)

We caught the concert at Cunningham Park, in Queens, which also featured fireworks display.

The program was a crowd-pleaser – the Symphonic Dances from West Side Story were simply transporting – and Gilbert looked extremely relaxed and joyful.

Alan Gilbert, who has stepped down as music director of NY Philharmonic, just revealed that he will be trading New York for Hamburg, Germany, leading the Elbphilharmonie Orchestra in the new Elbphilharmonie concert hall as chief conductor.

In a phone interview with the New York Times, Gilbert, a frequent guest conductor in Hamburg, said that the Elbphilharmonie’s vision aligned perfectly with his own paradigm for successful 21st-century orchestras. “It’s about how they connect to the cities they serve,” he said. “And one condition for that is the existence of a perfectly appropriate physical space. What’s going on there is related to what’s potentially going to happen here in New York with the idea of redoing David Geffen Hall.”

Gilbert bids farewell to New York in the parks concert program, writing, “It has been a privilege to stand upon this august platform and make decisions that have altered and enhanced New York City’s cultural landscape. When this Orchestra does artistic things, they are noticed, and they inspire others, far and wide. Ultimately, I know my tenure is just one chapter in the Philharmonic’s long story, and I look forward to seeing what comes next.”

As Music Director of the New York Philharmonic since 2009, Alan Gilbert has introduced the positions of The Marie-Josée Kravis Composer-in-Residence, The Mary and James G. Wallach Artist-in-Residence, and Artist-in-Association; CONTACT!, the new-music series; the NY PHIL BIENNIAL, an exploration of today’s music; and the New York Philharmonic Global Academy, partnerships with cultural institutions to offer training of pre-professional musicians, often alongside performance residencies. The Financial Times called him “the imaginative maestro-impresario in residence.”

Alan Gilbert concludes his final season as Music Director with four programs that reflect themes, works, and musicians that hold particular meaning for him, including Beethoven’s Ninth Symphony alongside Schoenberg’s A Survivor from Warsaw, Wagner’s complete Das Rheingold in concert, and an exploration of how music can effect positive change in the world. Other highlights include four World Premieres, Mahler’s Fourth Symphony, Ligeti’s Mysteries of the Macabre, and Manhattan, performed live to film. He also leads the Orchestra on the EUROPE / SPRING 2017 tour and in performance residencies in Shanghai and Santa Barbara. Past highlights include acclaimed stagings of Ligeti’s Le Grand Macabre, Janáček’s The Cunning Little Vixen, Stephen Sondheim’s Sweeney Todd starring Bryn Terfel and Emma Thompson (2015 Emmy nomination), and Honegger’s Joan of Arc at the Stake starring Marion Cotillard; 28 World Premieres; a tribute to Boulez and Stucky during the 2016 NY PHIL BIENNIAL; The Nielsen Project; the Verdi Requiem and Bach’s B-minor Mass; the score from 2001: A Space Odyssey, performed live to film; Mahler’s Resurrection Symphony on the tenth anniversary of 9/11; performing violin in Messiaen’s Quartet for the End of Time; and ten tours around the world.

Conductor laureate of the Royal Stockholm Philharmonic Orchestra and former principal guest conductor of Hamburg’s NDR Symphony Orchestra, Alan Gilbert regularly conducts leading orchestras around the world. This season he returns to the foremost European orchestras, including the Leipzig Gewandhaus, Munich Philharmonic, Amsterdam’s Royal Concertgebouw, and Orchestra dell’Accademia Nazionale di Santa Cecilia. He will record Beethoven’s complete piano concertos with the Academy of St Martin in the Fields and Inon Barnatan, and conduct Gershwin’s Porgy and Bess at Milan’s Teatro alla Scala, his first time leading a staged opera there. He made his acclaimed Metropolitan Opera debut conducting John Adams’s Doctor Atomic in 2008, the DVD of which received a Grammy Award, and he conducted Messiaen’s Des Canyons aux étoiles on a recent album recorded live at the Santa Fe Chamber Music Festival. Mr. Gilbert is Director of Conducting and Orchestral Studies at The Juilliard School, where he holds the William Schuman Chair in Musical Studies. His honors include Honorary Doctor of Music degrees from The Curtis Institute of Music (2010) and Westminster Choir College (2016), Columbia University’s Ditson Conductor’s Award (2011), election to The American Academy of Arts & Sciences (2014), a Foreign Policy Association Medal for his commitment to cultural diplomacy (2015), Officier de l’Ordre des Arts et des Lettres (2015), and New York University’s Lewis Rudin Award for Exemplary Service to New York City (2016).

Here are some parting shots of the meistro.