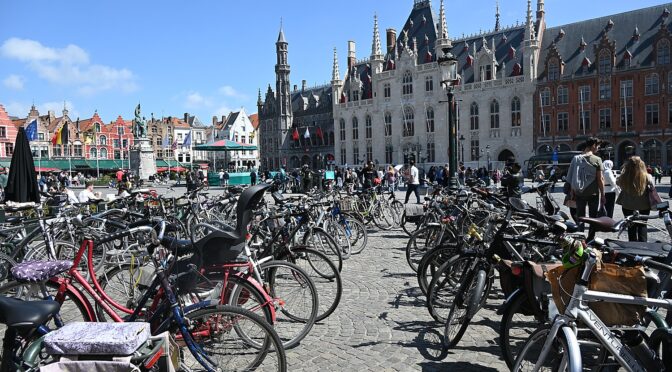 I’ve come to Bruges for an eight-day BoatBikeTours trip from here to Amsterdam and smartly (actually following the operator’s advice) have come a day early to have time to explore this UNESCO World Heritage city, known as the “Pearl of Flanders.”

So I wake in the Flanders Hotel, nestled within the historic district, enjoy a marvelous breakfast in their lovely breakfast room overlooking a garden with a koi pond, and have time to wander, immersing myself in the extraordinary beauty and peacefulness of this place, before getting myself to the ship, the Princesse Royal, that will be my floating hotel to Amsterdam.

I come upon a street market just across from one of the city’s prominent art museums, Groeninge Museum, near the Church of Our Lady, with an extensive collection of Flemish primitive, 18th and 19th century and modern art.  In my wanderings, I take note of some of the city’s museums and attractions: Historium Bruges, Gruuthusemuseum, Chocolate Story, Bruges Beer Experience (this is extremely popular and I can’t resist going inside), and Old St. John’s (Memling Museum).

The hotel has given me a late checkout, so I time my wanderings to return to collect myself and get myself to the ship.

I am greeted by our tour leaders, Corrie Stein and Arnold Thurkow, and shown to my cabin – a pleasant single with its own bathroom (!!). We are fitted for our bikes and get to take a bit of a spin that takes us to visit Bruges’ historic windmills, located on top of what would have been the city’s ramparts along the canalside bike path from our ship.

These four windmills, between the Dampoort and Kruispoort, are what’s left of 23 that once stood here, principally to grind grain, and were part of the town walls since the end of 13th century.

Sint-Janshuismill, the oldest windmill, built in 1770, is the only one still standing on its original site and is the only one with a museum inside that is open for public. Incredibly, the wooden mill is still grinding flour.

Back on the ship, Arnold leads a bike safety talk and orientation about our week-long bike trip – there is surprisingly a lot to learn about the various traffic signs and rules just for cyclists, a testament to how prevalent biking is in this region – we will even have our own trails, paths, roads and traffic signals. (Arnold, after explaining right-of-way at the yield signs – these triangles painted on the pavement –  counsels, “Don’t take the right of way. Give it.”).

After a delightful dinner that sets the tone for the rest of our cruise, Corrie and Arnold take us for a walking tour of Bruges and I get more insights into what I had been seeing on my own walks.

Corrie (as we discover throughout our bike trip, since these narrated excursions of interesting places are the routine everywhere we stop at something of interest) is a fabulous storyteller, able to impart insights and call your attention to things that would otherwise escape notice.

Interesting in the scheme of world history, Bruges, she says, was a leading trading center in the 14th century because of its innovative canals that linked the city to the sea,  the source of its wealth and prosperity; international merchants built Bruges into one of the largest Hanse cities. But Bruges was displaced by Ghent’ rise as a trading center because of technology and events in the 15th, Antwerp in the 16th century and Amsterdam in the 17th century.

Corrie calls Bruges a “Sleeping Beauty” with exquisitely beautiful buildings but, as it lost its economic base, its inhabitants got poorer and poorer. Ironically, the result was that Bruges’ medieval heritage remained intact as the city was ignored by development. But a 19th century novel, “Bruges la Morte,” by the Belgian author Georges Rodenbach was like the kiss that awakened the Sleeping Beauty. First published in 1892, it was the first work of fiction to be illustrated with photographs, and the photos spurred tourists to see the city as it was in its Golden Century, with its canals, cobbled streets and medieval buildings. UNESCO designated the entire city center as a World Heritage site. Today, some 2 million visit Bruges, providing the economic base to sustain its heritage and exquisite architecture.

Our ship, the Princesse Royal, is docked just across from Minnewater Park. We walk across an intriguing, modern red bridge into the park, one of the most romantic sites in this romantic city (you can see why Bruges attracts so many couples). Legend has it that Minnewater, the Lake of Love, is where water nymphs (“minnen” in Dutch) lived, giving the lake its name. Add to that a tragic love story and trees with intriguing shapes and you get a place overflowing with romance.

We see swans (so picturesque!) and learn that they are not only legendary in Bruges, but an obligation. Corrie relates that at the end of the 15th century, the oppressed people of Bruges revolted against the unpopular Emperor Maximilian of Austria, capturing him and imprisoning him in the Craenenburg House on the Markt Square, together with his equally unpopular chief of police, Pieter Lanckhals (he was executed). After four months, the Emperor was freed by his army. The people tried to placate him, reminding him that their revolt was because the Emperor’s wife had made promises she failed to keep. Maybe that worked, because his “revenge” on the town seems fairly tame: he decreed that ‘until the end of time’ the city would be required at its own expense to keep swans on all its lakes and canals. Why swans? Because swans have long necks, and the Dutch for “long neck” is “lange hals,” or “lanckhals”. (The beautiful benches that are so popular with couples have swans.) You can see wrought iron swans on the park benches where couples sit.

We go to a walled complex that Corrie says was built by Countess Mary of Constantinople to shelter widowed ladies, who engaged in spinning and weaving. “She took care of the ill and the poor. They wanted the sheltered life to be safe.” In 1927, the complex was taken over by Benedictine nuns.

We stop in front of Bruges’ most famous brewery, Brewery of Halve Moon, which has operated here since 1856. Bruges has been brewing beer since the Mid Ages – it was important because water was not safe, so everyone, even kids, drank beer at every meal, Arnold relates. (One of Bruges most popular attractions is the Beer Experience.)

Corrie points out a building that would have been a hospital in the Middle Ages and where there is an entrance from the canal. “They knew some diseases were contagious, so had a separate entrance for those people.”

We stop outside the Notre-Dame de Bruges, with a 115.5 meter-high church tower (the second tallest in the world, we are told). It is notable for having the only statue by Michelangelo outside Italy. Corrie relates that the statue was of a naked child and wasn’t deemed acceptable to display in Italy, so a Bruges merchant bought it and brought it here. The church has many art treasures, paintings, 13th and 14th century painted crypts and 15th and 16th century tombs of Mary of Burgundy and Charles the Bold.

We come to The Burg, the seat of power in the city: the 14th century Stadhuis, the Gothic Town Hall, two palaces of justice, the original gate to the city bordering a majestic square.

In a corner of the Burg square, too, is the Basilica of the Holy Blood. The chapel is behind a richly decorated facade which is actually a 16th century staircase connecting the Romanesque Saint-Basilius chapel on the ground floor with the neo-Gothic Holy Blood Chapel on the upper floor. It seems to me this chapel has singularly put Bruges on the map.

Originally built in the 12th century as the chapel of the residence of the Count of Flanders, the church is famous because it houses a venerated relic – a phial said to contain a cloth with the blood of Jesus Christ, allegedly collected by Joseph of Arimathea and brought from the Holy Land by Thierry of Alsace, Count of Flanders.

The relic is kept in a silver tabernacle with a sculpture of the Lamb of God in the large side chapel of the upper church.

I’m intrigued to learn more from Bruges’ visitor site: “Legend has it that after the Crucifixion, Joseph of Arimathea wiped blood from the body of Christ and preserved the cloth. The relic remained in the Holy Land until the Second Crusade, when the King of Jerusalem Baldwin III gave it to his brother-in-law, Count of Flanders Diederik van de Elzas. The count arrived with it in Bruges on April 7, 1150 and placed it in a chapel he had built on Burg Square…

“However, recent research found no evidences of the presence of the relic in Bruges before the 1250s. In all likelihood, the relic originated from the 1204 sack of Constantinople by the army of the Count of Flanders, Baldwin IX during the Fourth Crusade. Ever since, the phial has played no small part in the religious life of the city. Pope Clement V issued a papal bull in 1310 granting indulgences to pilgrims who visited the chapel to view the relic.” (https://visit-bruges.be/see/churches/basilica-holy-blood)

The relic is shown to the public every Friday and also each day from May 3-17. Outside the chapel is the Holy Blood museum, which contains the shrine for the Holy Blood and other treasures belonging to the chapel. (You can visit the first floor chapel for free, but there is a fee to go to the upper floor. https://visit-bruges.be/see/churches/basilica-holy-blood)

I see the banners that herald a Bruges tradition that dates back to 1304 – the relic of the Holy Blood carried around the city in the Holy Blood Procession on Ascension Day. This folk tradition involves everyone in the city and was recognized by UNESCO as Intangible Cultural Heritage in 2009.

In 2014, Belgian carilloneurs were also given significant international recognition. The sound of the carillons can be heard all around Bruges throughout the year, but one of the best places to listen is on the Markt Square or in the Belfry courtyard. (I get to hear it during a concert of re-orchestrated 300-year old Flemish music coordinated with the bells).

The 13th-century Belfort (belfry) with a 47-bell carillon and 83m high tower dominates The Markt Square, which is called the “beating heart of Bruges.” You can buy a ticket to climb it for panoramic views. There is the magnificent Bruges City Hall building, the Historium Bruges (fictional characters tell a story of medieval Bruges). The architecture all around the square is breathtaking – there is the imposing Provincial Court and colorful buildings with stepped gables. The scene is all the more picturesque for the many horse-drawn carriages.

There is so much to see and enjoy, Bruges really warrants a longer stay: What seems to be the most popular, must-see is the “Bruges Beer Experience” just around the corner from the Belfort; chocolate museum (Choco-Story). Also: torture museum; Diamond Museum, Lace Centre, archeology museum, Our Lady of the Pottery (historic Gothic church with baroque decor, a famous statue and a hospital now serving as a museum). (Must come back.)

I am sad to leave Bruges, but excited to start our bike journey. Tomorrow we will bike to Ghent.