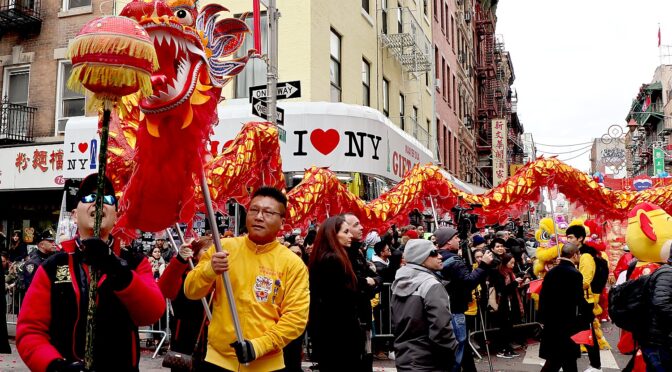 Always a show of support, solidarity and respect for the Chinese and Asian community in New York City, this year’s Lunar New Year parade in Chinatown in downtown Manhattan, welcoming the Year of the Rat, took on added urgency because of the coronavirus afflicting Wuhan, China, and the recent fire that destroyed a building housing much of the collection of the Museum of Chinese in America.

People held up signs, “Stay Strong Wuhan,” but even though there have been no instances of the coronavirus in New York City, visits to Chinatown, normally at peak during the Lunar New Year celebration, have declined and business has been affected.

The parade route went just passed 70 Mulberry Street, where on the night of Thursday, January 16, a fire destroyed most of the 85,000 items stored there for the Museum of Chinese in America, housed nearby in a new building on Centre Street since 2009. The rare and cherished items preserved the rich and challenging story of the Chinese migration to the United States through such personal objects as textiles, restaurant menus, handwritten letters, tickets for ship’s passage, traditional wedding dresses (cheongsam).

The building, a former school that educated generations of immigrants, is a community center that housed a senior center, the Chen Dance Center and several community groups, in addition to storing the museum’s artifacts that were not on display.

Political and parade officials praised the New York Fire Department, which had a prominent place – bagpipers and all – in the parade.

Meanwhile, fear over the virus has kept people from Chinatown and Chinese restaurants during what should have been the busiest time of year, the Lunar New Year celebration.

Elected officials are urging the public to take normal precautions against illness, but not to let fears concerning coronavirus stop them from participating in the event. “It’s really important in this moment where everyone is understandably worried about the coronavirus, we need to be factual, we need to be scientific, and we need to be calm,” NYC Council Speaker Corey Johnson said.

The annual event has not only paid tribute to the contribution the Asian community has made to the city, state and nation, but immigration as a whole.

New York City Mayor Bill De Blasio, reading from a proclamation, said, “As a city built by immigrations, New York is the proud home to residents who hail from every corner of the map and speak a multitude of languages. This unparalleled diversity is the source of our singularity and strength and it is exemplified by our thriving population of Asian Americans that has made invaluable contributions to the cultural, civic and economic life of the five boroughs. On the occasion of the 21st Chinatown Lunar New Year Parade and Festival, hosted by Beter Chinatown U.S.A. I am pleased to recognize the indelible imprint this vital community has made on our great and global city.

“New York is fortunate to have an abundance of organizations devoted to advancing positive change. Established in 2001, Better Chinatown U.S.A. is guided by its mission to improve quality of life in Manhattan’s Chinatown and promote it as a destination of choice for our diverse residents and visitors. Its annual Lunar New Year Parade is a much anticipated event attracting thousands of spectators from far and wide for a pageant of traditional lion dances, music ensembles, and dancers in colorful folk costumes, followed by a party in Sara D. Roosevelt Park featuring Chinese food and cultural performances.”

Congresswoman Nydia Velázquez, one of the Grand Marshals, spoke of the resilience of the Chinese community, and how the community “contributes to the fabric of our city, our nation.”

“I’m here to say that Chinatown is open for business and we are behind you and we will remain strong,” Velazquez said. “Last night, I was here dining in a restaurant in Chinatown. I welcome everyone to come here and celebrate the culture and beauty of this community.”

China’s Consul General Huang Ping said “China is doing everything to confront the coronavirus. We have mobilized forces. We have strong leadership, resources, are working with the international community. Be strong China. Be strong Wuhan.”

New York City Mayor Bill De Blasio declared the city stands in solidarity with China and the Asian community, “no matter what is thrown at us.” New York has the largest Chinese community outside Asia “and we are proud of that.” The city made the Lunar New Year a school holiday and teaches Mandarin as early as pre-K, and is actively promoting participation in the 2020 Census.

“In China, there are so many of loved ones, faced with coronavirus and we stand together as community,” De Blasio said. “We celebrate New Year together – we are united, and we celebrate this extraordinary Chinese community the largest of any city outside of Asia.”

He also presented a Proclamation to parade organizer Steven Ting day for his continued work on the parade, proclaiming February 9 “Steven Ting Day.”

US Senator Charles Schumer used a bull horn as he marched in the parade to cheer for immigration. “New Yorkers are proud people, who come from all over the world. We fight those who oppose us.”

And on that score, the parade was also used to promote the importance of being counted in the 2020 Census, with one group of even handing out flyers to recruit census takers ($28/hr, flexible hours).