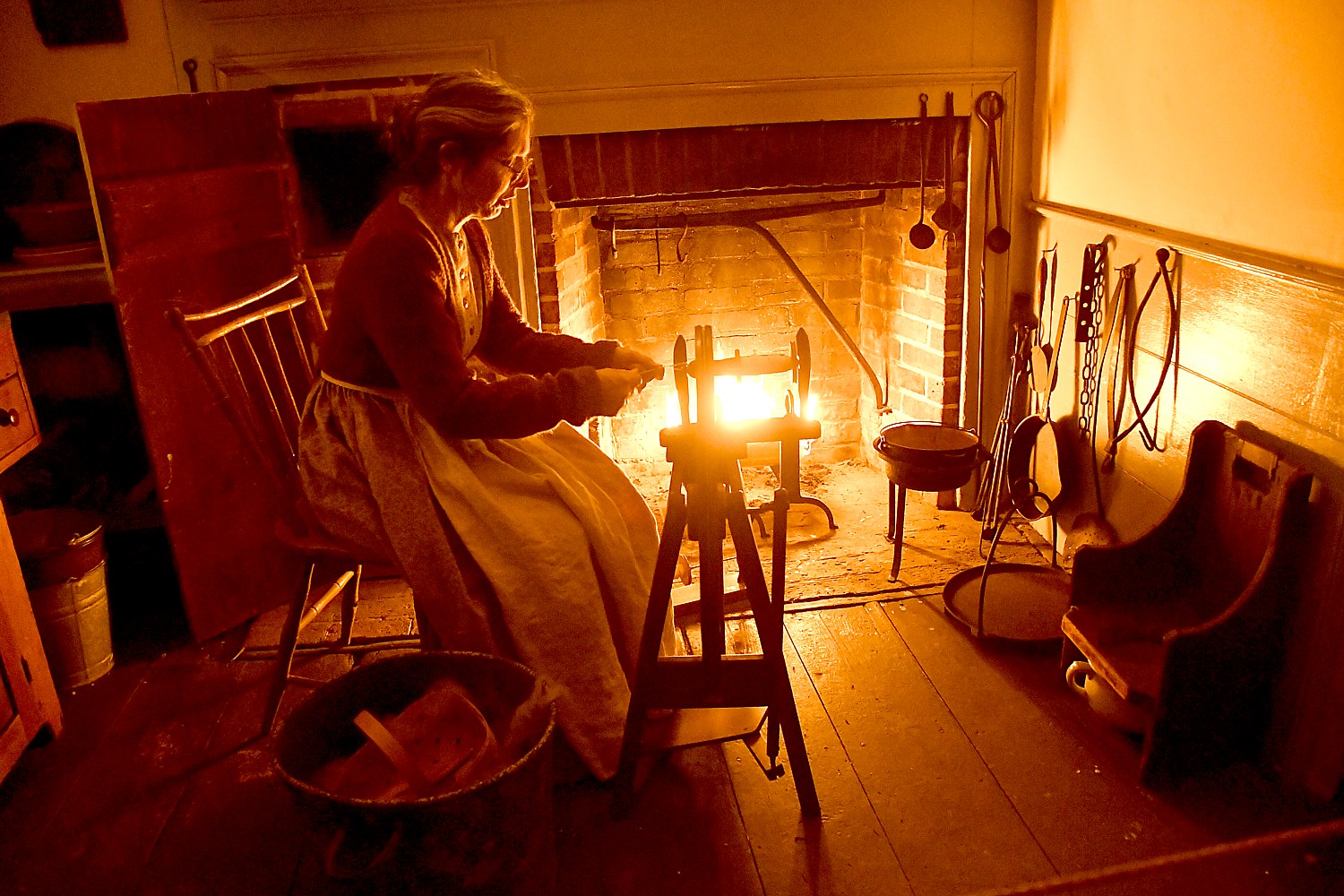 Fire light. That is the common denominator – seeing life in the orange-red glow of candlelight, a fireplace, a bonfire. One of my favorite holiday events is the Old Bethpage Village Restoration Candlelight Evening, and even the bitter cold could not keep me away.

I arrive in time for the candlelight procession into the village, to the gazebo where an 1840s brass band is playing, despite the bone-chilling cold.

The most wonderful thing about the candlelight evenings at Old Bethpage Village Restoration on Long Island, is yes, the sense of stepping back into time, into an idyllic peacefulness such as finding yourself in a Christmas card. But what I love best are the serendipitous moments when you engage the reenactors in conversation- the questions that arise just because you are immersed in that experience.

At the District No. 6 School House, which dates from c. 1845 in Manhasset, there is traditional fiddle music, played on a period instrument, a 150-year old violin that had been made in Prague, that has no chin rest or frets. We learn about the Manhasset School house – children attended the one-room school house six days a week. Music would have been widespread but there were no real professional musicians in Long Island. The school house would have been the venue for music, entertainment, and various gatherings in the evening. He tells me that all of Nassau County used to be part of Queens County, until the residents wanted to separate from New York City. He performs one of the most popular of his repertoire,“The Dancing Man,” to which his wife maneuvers a fascinating puppet-like toy to dance along.

At the Hewlett House – a grand home high on the hill, which was built by the founder for which the town of Hewlett is named – Max L. Rowland regals on a banjo, reconstructed to its period, and a concertina and because I ask, he talks about the instruments . He says that in the mid-1800s, the concertina was the most popular instrument around – because it was relatively inexpensive (costing less than a violin), and compact, easy to carry and capable of such rich sound and complexity.  It was extremely popular with sailors, who could tuck it away in their gear. Rowland can testify to it: this particular concertina has crossed the sea three times with Rowland, who lives on a boat.

There is also popcorn being made in the kitchen fireplace.

At the beautiful Manetto Hill Church, 1857, a Methodist church that originally was located in Plainview, there is singing and storytelling – the origin of holly (representing male), ivy (representing female), so the two entwined are a symbol of marriage; mistletoe and poinsettias.

The Noon Inn, which dates from 1850 and was owned John H. Noon, innkeeper, in East Meadow, is where you can get hot mulled cider and cookies, and climb the stairs to hear a string ensemble.

At the Luyster Store, which dates from c. 1840 and was built by John B. Luyster, a storekeeper in East Norwich, you see the rare craft of broom making (and can purchase the brooms that are made here). The fellow works on a machine from 1840, and you can see how much physical effort goes into it. He explains that a home would have had 2 brooms per room, or 18 per household; an ordinary broom might have cost 24 cents – but that was equivalent to half-day’s wages, or about $50 today (so his price of $20 is a bargain). This also was an enterprise that farmers would do to make extra money, and they would raise the special wheat (called “corn”) for that purpose. An interesting artifact here is the massive safe.

The Layton House is also the General Store dates from c. 1866 and was built by John M. Layton, a storekeeper. It had originally stood in East Norwich. He was fabulously wealthy as you can see by the large rooms and tall ceilings. Here, in the parlor, I meet Santa Claus who seems relaxed after his trip around the world; later, when I come back, there is a choral group. In the next room is the Layton General Store – the Walmart of its day – where you can purchase candy.

The Benjamin House, dating from 1829, was built for William Benjamin, a minister and farmer in Northville, where there is a bass and violin playing holiday melodies that would have been popular at the time – like Deck the Halls, which was a Welsh melody dating back to the 1600s. We discuss Christmas traditions of the time (gift-giving wasn’t yet a tradition, but Queen Victoria had popularized table-top Christmas trees as a loving gesture to Prince Albert).

I stop into the Conklin House last – this house dates from 1853 and was build by Joseph H. Conklin, a bayman in the village of Branch. It is small and I am surprised to see spinning being done in front of the fireplace where there is a roaring fire (so picturesque). She is so patient in explaining how it is done – how common it would have been for a farm woman to have spent some time in the evening spinning, but there were professional spinners (men) and spinsters (women) – spinning, was in fact, one of the ways a woman could have earned money. By the mid-1800s, though, people were importing finished textiles.

I usually save the Schenck House for last because each year, because it is here that I come upon the most unexpected encounters and find it the most illuminating. Instead of interpreting the holiday traditions of the mid 1800s, the Huntington Militia re-create a Colonial Christmas in the 17th century. The Schenck House dates from 1765, owned by a Dutch farmer. Here, our presenters speak in the style of the time, and celebrate Christmas of 1775.

I am swept into its history. I am transfixed talking with “Ambrose Everyman,” a fellow from 1775, an American of English descent really troubled by North Hempstead’s succession from the Town of Hempstead over the issue of rebellion against the King and Crown. His loyalties are clear. He raises the question over how the colonists are made so dissatisfied with the King – and questions the veracity of the crimes and accusations designed to foment rebellion. He notes that since the first Continental Congress, the Massachusetts faction of the Patriots have banned women from going to the tavern, banned theatrical entertainment – in effect, installed the Puritan societal structure on the colonies.

And because of the “attack against one of the colonies is an attack against us all,” he questions whether the attacks in Lexington and Concord, portrayed as a British massacre, really happened that way.  “How do we really know?” he tells me (the original “fake news”?).  Mr. Everyman was upset with the upstarts in Massachusetts who caused so much trouble, who dared to pretend to be Indians and toss tea into the sea. He called them cowards for hiding behind their disguise. He said he knew war – had fought in the French and Indian War – but was too old to fight again. If there was a break with England, he says,, his business of building and repairing houses, would be destroyed.

But, he says, he cannot express his feelings: the local Committee is strictly enforcing its ban on English tea and though it had no force of law, someone who broke faith would be shamed in the Gazetteer as “an Enemy of American Liberty,” would no longer get business, and ultimately be forced out of the community. So he keeps his views to himself. Taxes? What difference does it make to pay taxes to England or taxes to the Congress, he said. And doesn’t England deserve to get repayment for the expense of fighting for the colonies. How would those who would break from England confront the greatest army on earth? Would they get aid from foreign powers like France, when France would want to take over the colonies for itself?

He gives me the sense of what a difficult dilemma this was – the prospect of confronting the most powerful nation the world had never known, the superpower of its time – and how while there had never been consensus (New York patriots fled to Philadelphia), the forcefulness with which the revolutionaries pressed their cause, the violence, a literal civil war within communities.

He goes on to show the group of Candlelight visitors that has gathered how the owner of the House, Martin Schenck, would have celebrated St. Nicholas Day (Dec. 6), when the children put out wooden shoes, filled with a carrot to draw the horse that St. Nicholas rides through the sky on, and leaves them treats – an orange that would have been an expensive treat having been imported from Jamaica, and  skates for the young girl, a pull-toy for the baby.

Here at the Schenck House, the Huntington Militia – a group of reenactors – are dressed in the style of the militia of this Revolutionary War era. This year they fire Christmas guns – demonstrating the painstaking task of loading their muskets.

Then, at The Barn on the fairgrounds, there are a model train show, contra dancing, a brass ensemble and a delightful performance of “Scrooge’s Dream” – a condensation of Dickens’ “Christmas Carol.”