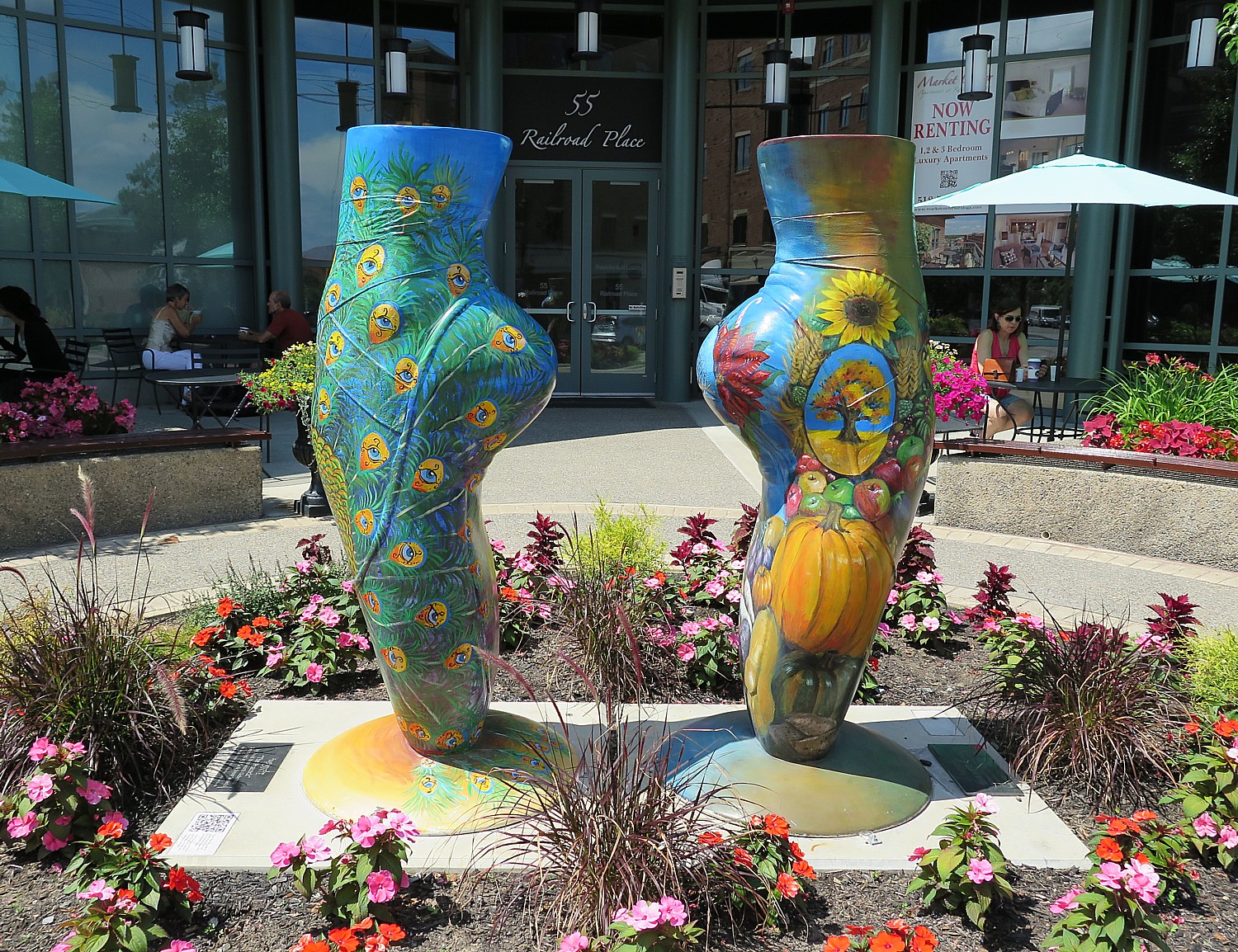 With just one full day to explore Saratoga Springs, I am still able to take in the high points that distinguish this town, which has been so popular a place for visitors going back to the 14th century, when its mineral springs were first discovered by Native Americans. Later, it became a major center for organized horse racing, a tradition which remains today, and draws the biggest crowds during the six-weeks of racing season. But Saratoga Springs, owing to the millionaires and elites and then the colleges including Skidmore, has also become a cultural mecca, especially for dance. The Saratoga Springs Performing Arts Center is the summer home for the New York City Ballet and now the home of the National Museum of Dance.

During my one full day in Saratoga Springs, after thoroughly exploring its horse-racing traditions at the race track and the National Museum of Racing, I next visit the National Museum of Dance, which is located just at the entrance to the Saratoga Spa State Park in what had been the historic Washington Bathhouse (there is still an exhibit to the historic spa). This is such a surprise.

It exquisitely reflects the visual as well as the athletics and art of dance; surprised at seeing video going back to 1895 of dance. All the dance legends are represented with stunning photos, videos, costumes.

Established in 1986, the National Museum of Dance & Hall of Fame is the only museum of its kind in the nation and one of only a few in the world dedicated to the art of dance (which is why they claim the name, “National.”)

It is set in the former Washington Bathhouse, a 1918 Arts & Crafts style building in the Saratoga Spa State Park which provided health spa treatments (there are rooms you can visit from that time).

The Museum’s archives house a growing collection of photographs, videos, costumes, documents, biographies and artifacts that honor all forms of dance throughout history.

Dancers in Film, a delightful ongoing exhibition, celebrates the relationship between dancers and film, and features both well-known dance stars and our favorite actors who have had world famous dance roles on the silver screen. Highlighted in the exhibit are Lifetime Achievement Award Recipients Ann-Margret (2010), John Travolta (2014), and Chita Rivera (2015). You will love sitting and watching the fast-changing videos. I am frankly amazed to see some of the oldest ones, even from 1895 (at the very dawn of movie-making).

Sparked by an abundant discourse both age-old and current, The Dancing Athlete is an innovative exhibition that explores the inherent connections between dance and sports, and dancers and athletes, and the influence and confluence of these forms throughout history. Through costumes, photographs, video, objects, and archival materials, the exhibit examines these relationships within several themes such as cross training and physiological impact, shared movement vocabularies, and sports-inspired choreography, among others. A select group of athletes and dancers including Lynn Swann, Sugar Ray Robinson, and Edward Villella are showcased as well as several choreographic works including Gene Kelly’s stunning  “A Man’s Game”. By highlighting the athletic prowess of dancers and injecting popular sports and athletes, boys, especially, will better appreciate dance.

Opened in 1987, the Dance Hall of Fame honors dance pioneers of all types whether they are choreographers, composers, writers, dancers, or patrons; there are more than 50 who are so far included in the Hall of Fame. Among them: Fred Astaire, George Balanchine, Agnes deMille, Rudolph Nureyev, Isadora Duncan, Martha Graham, Bill “Bojangles” Robinson, Busby Berkeley, Jerome Robbins, Alvin Ailey, Merce Cunningham, Paul Taylor, The Nicholas Brothers, Bob Fosse, Marge Champion, Tommy Tune, Edward Villella and Michael Jackson and the newest inductees, Gregory Hines and Patricia Wilde who are featured in special exhibits devoted to their careers  (see a complete list of the inductees, http://dancemuseum.org/exhibits/hof.html).

The Museum campus also includes the Lewis A. Swyer Studios, a building constructed specifically for the purpose of keeping live dance as part of the Museum’s offerings. The Swyer Studios welcome frequent master classes, lecture/demonstrations, residencies, and other programs, as well as the Museum’s very own dance school, the School of the Arts, which offers dance classes to all ages, levels, and interests. The Museum also offers a wide selection of special programs, events, and workshops throughout the year.

Twist! Jump! Play! Dance! The Alfred Z. Solomon Children’s Wing is an interactive space just for kids, with a video library, reading corner, movement and balance toys, and stage area. A Kids’ Gallery showcases rotating exhibits of children’s artwork and is where visitors can create their own masterpieces.

The museum also offers a Resource Room with thousands of books, periodicals, and print items for dance research available to the public.

When I visit, I notice young girls, their hair tied back in the bun typical of dancers, looking on with adoration. This is their Cooperstown.

There is a very good reason for the National Museum of Dance to be set at Saratoga Spa State Park: Saratoga Performing Arts Center (SPAC), a stunning amphitheater, is set in the heart of The Spa State Park and is the summer residence of the New York City Ballet as well as the Philadelphia Philharmonic Orchestra. Surrounded by 2,400 acres of green hills, geysers, natural mineral springs and hiking trails, you can enjoy jazz, pop and classical concerts. (108 Avenue of the Pines, Saratoga Springs, NY 12866, spac.org).

I didn’t get a chance to really explore the Saratoga Spa State Park, but it has a score of attractions contained within it, in addition to the National Museum of Dance and the Saratoga Performing Arts Center. It also has the Saratoga Automobile Museum, which this year is featuring as its main exhibit, “The Gavel: Cars of the Saratoga Auto Auction” which gives an insider look at the workings of the classic and collector automobile auctions that have become so popular with television viewers. Vehicles on display range from a 1931 Ford Model A Woody to a very rare 1957 Chrysler 300C standard shift, a 1957 Ford Thunderbird and a 1957 Continental Mark II. Imports represented include a 2003 Maserati Spyder convertible and a 2013 Lotus Exige Factory Cup on display.  These cars, along with hundreds of others, are on display until September 17, when they are all headed for the auction block in September at the Saratoga Auto Auction. (110 Ave of the Pines, Saratoga Springs, NY 12866 , 518-587-1935, www.saratogaautomuseum.org, Tuesday-Sunday, 10 am-5 pm).

My walking tours from the Inn at Saratoga take me passed and through Congress Park, where in 1792, New Hampshire Congressman John Gilman discovered a mineral spring. (I also take note of a free cutey-pie trolley that operates up Broadway, but I prefer to walk). In 1822, Dr. John Clarke purchased Congress Spring and surrounding land, drained the swamp and built a park where he offered concerts. He built his impressive Greek Revival home overlooking the park, as well as a bottling plant. In 1876, Frederick Law Olmsted, the famous landscape architect who designed New York’s Central Park, designed the gardens. The Park today harbors a visitor center (built in 1915 as a trolley station); the Casino (a gaming house for men built in 1870 by prize fighter, former Congressman and gambling entrepreneur who developed Saratoga horse racing, John Morrissey, which today houses the Saratoga Springs History Museum), Italian Gardens, Congress Park Carousel, and some wonderful sculptures, fountains and monuments.

At the visitor center you can pick up some wonderful self-guided tours, such as North Broadway, “a neighborhood of exceptional residential architecture”; West Side Neighborhood (“The City’s first prime residential location, where many of the people who owned, supported and worked in the bustling resort industry lived.:”and East Side Neighborhood, once home to Skidmore College, rich in history and spectacular architecture, including stunning examples of Greek Revival, Victorian, Gothic, Italianate, Second Empire and Queen Anne styles.

On the Friday night I am in Saratoga Springs, I have a plethora of choices: watching harness racing, polo matches, a performance of the New York City Ballet, and any number of live music venues, including Caffe Lena.

I wander over to Caffè Lena, a famous folk-music venue which the New York times in 2013 called “Folk Music Heaven, was sporting a $2 million renovation, its first since opening in the 1960, and had people lined up out the door hoping to get through a wait-list for that evening’s performance. It actually offers a range of styles – folk, jazz, poetry night, open-mike night – and still retains the intimacy of a small room and small stage, so you are mere feet away from the performer. “Opened in a former woodworking shop in 1960, the café has helped launch many of America’s best loved songwriters, ranging from Bob Dylan in 1961 to Sawyer Fredericks in 2014, with an dazzling Who’s Who list in between. When founder Lena Spencer passed away in 1989, Caffè Lena was converted to a non-profit institution supported by concert revenue, private and corporate donors, grants and bequests, and an ever-evolving team of volunteers.” (Caffè Lena, 47 Phila Street, 518-583-0022, Tickets: 800-838-3006, email:  sales@caffelena.org. caffelena.org.)