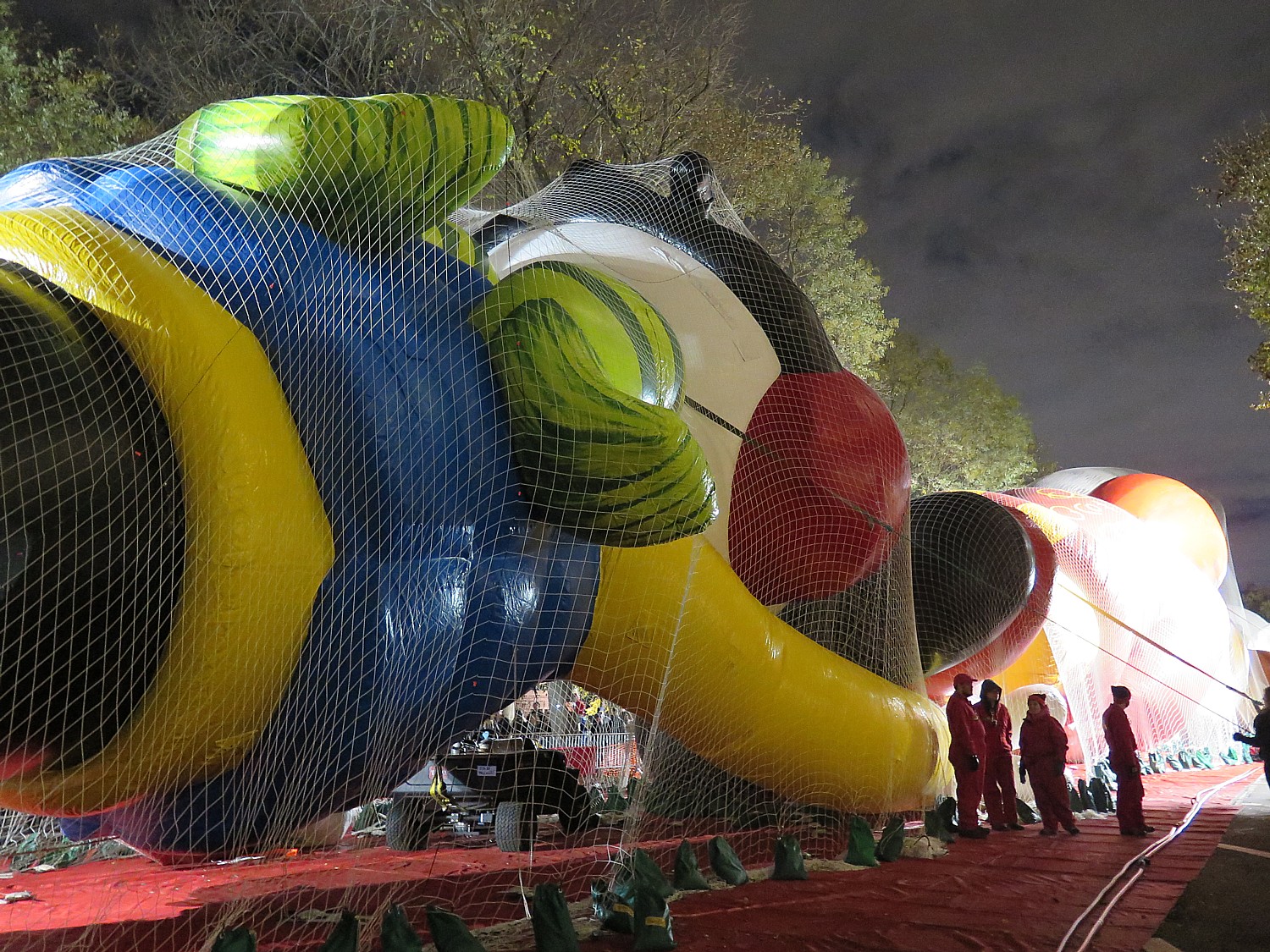 NEW YORK –This Thanksgiving, a magical march returns to the streets of New York City and to homes across the U.S. as the 91st Annual Macy’s Thanksgiving Day Parade® kicks off the holiday season with its signature spectacle of wonder. On Thursday, Nov. 23 (9 a.m.-noon in all time zones), the streets of Manhattan fill with the sound of “Let’s Have a Parade!” Matt Lauer, Savannah Guthrie and Al Roker of NBC’s “Today” will host the broadcast. Telemundo will simulcast the parade in Spanish, with the event hosted by Carlos Ponce, Jessica Carrillo and Karim Mendiburu.

But the night before, the streets around the Museum of Natural History on Central Park West are literally flooded with hundreds of thousands of people coming to delight in seeing the massive balloons – 17 giant character balloons and 28 legacy balloons, balloonides, balloonheads and trycaloons, being inflated by hundreds of volunteers.

New York City Mayor Bill DiBlasio spoke of how iconic the Macy’s Thanksgiving Parade and the Balloon Inflation events have become, and how the parade not only kicks off the holiday season for the city, but the entire nation.

“It’s an example of what makes New York City great – hundreds of thousands here tonight, tomorrow millions, and it comes off flawlessly,” Mayor DiBlasio said. “It takes a lot of work, and working together. New York City is a beacon to the world – we have people of every background, faith, nationality, in harmony, giving thanks together.

“This is a beautiful event that happens because we’re safe. Every year, the NYPD does more to keep us safe. We live in a dangerous world. We have the strongest anti-terrorism capacity of any police force in thecountry. You will see a lot of officers so people feel good, confident, calm.

“There has been no credible or specific threat against New York or the parade. But we have precautions in place. Everyone needs to help: if you see something, say something.”

Acknowledging the terror attack that took place on Halloween in which 8 people lost their lives, he said, “That attack was an attempt to under our values, our democracy. It failed. Everyone is out, enjoying this great celebration. It is important to show how it failed.

NYPD commissioner James O’Neill said that there will be 36,000 police out on the streets, criticial response teams, mounted police, long-gun teams. “This is the reality of 2017. We have 2000 more officers on patrol than last year.”

Macy’s CEO Jeff Gennette noted that the parade started almost a century ago by employees who wanted to do something for their families and local people. For the 91st edition, the line-up will feature 17 giant character balloons; 28 legacy balloons, balloonicles, balloonheads and trycaloons; 26 floats; 1,100 cheerleaders and dancers; more than 1,000 clowns; 12 marching bands; and 6 performance groups.

A special float by Delta Air Lines will debut to commemorate the season of togetherness with the gift of song, as more than 125 Macy’s employees gather to form a one-of-a-kind cross-generational choir aboard the Macy’s Singing Christmas Tree.

“It’s the beginning of a new tradition.” Gennette said.

Here are highlights from the Balloon Inflation:

Here’s more of what to look for in the Parade:

On 34th Street, Broadway’s best shows will take a star turn in front of Macy’s famed flagship with special performances from the casts of “Anastasia,” “Dear Evan Hansen,” “Once On This Island” and “SpongeBob SquarePants – The Broadway Musical.” In addition, the show-stopping Radio City Rockettes®  will bring their signature high-kicking magic to Herald Square.

“The Macy’s Thanksgiving Day Parade is one of our great holiday traditions and we’re thrilled to be able to once again bring the pageantry and spectacle to viewers across the country,” said Doug Vaughan, Executive Vice President, Special Programs and Late Night, NBC Entertainment. “We can’t wait to see all the balloons, floats and high-end entertainment that have become such an integral part of this wonderful event.”

“For more than 90 years, Macy’s Thanksgiving Day Parade has signaled the start of the holiday season for millions of families. We are thrilled to once again come together as a nation to give this gift of joy and wonder to all,” said Susan Tercero, group vice-president of Macy’s Thanksgiving Day Parade. She added, “Our incredible team has planned a fantastic spectacle featuring an amazing line-up of giant character balloons, floats of fantasy, the nation’s best marching bands and performance groups, a dazzling array of musical artists, all coming together to herald the arrival of the one-and-only Santa Claus.”

The Macy’s Parade is always a unique multi-level, magical march that provides spectators with different experiences, whether they watch it on television with friends and family or scout the perfect spot on the route to watch it unfold live. To give fans another unique viewing opportunity, Macy’s, along with NBCUniversal and Verizon will once again take viewers closer to the magic via up close and personal views of the event through a 360-degree livestream of the parade on Verizon’s YouTube page. The stream, found at www.youtube.com/verizon, will be synced with the start of the Parade.

Taking flight on Turkey Day will be the Parade’s signature giant character helium balloons. Since their introduction in 1927, these giants of the sky have featured some of the world’s most beloved characters. This year four giant characters will debut, including Olaf from Disney’s “Frozen,” Illumination presents Dr. Seuss’ The Grinch, Jett from Super Wings™ and PAW Patrol®.

The balloon line-up will also feature the return of Harold the Baseball Player, a legacy Macy’s character prominently featured in Twentieth Century Fox’s iconic holiday film classic “Miracle on 34th Street.” In celebration of the film’s 70th anniversary, the Harold heritage balloon has been recreated for this year’s Parade, painted in hues of black, white and grey, to look exactly as it did on-screen during a memorable scene in the 1947 film. In addition to Harold, the famed spokesduck, the Aflac Duck, will debut as an all-new balloonicle (a Macy’s Parade innovation of hybrid cold-air balloon and vehicle) and is sure to have fans quacking with joy and laughter down the route.

Floating down the route this Thanksgiving, the Parade’s signature floats transport spectators to worlds of wonder. Designed and created by the incredible artists of Macy’s Parade Studio, which include carpenters, painters, animators, sculptors, metal fabricators, scenic/costume designers and electricians, this year’s line-up of floats sets an unparalleled stage for entertainment. The painstaking process of creating a Macy’s Parade float is both a creative and technical endeavor. Macy’s Parade floats are often three-stories tall and several lanes of traffic wide, but must collapse to no more than 12½-feet tall and 8-feet wide in order to travel safely from the New Jersey home of the Parade Studio, to the Manhattan starting line via the Lincoln Tunnel each Thanksgiving eve. These creations are not only works of art, but also engineering marvels.

Specialty Parade entertainment always promises a unique, exciting, and sometimes humorous look at the nation’s finest performance groups. Returning to the line-up this year are the dancers and cheerleaders of Spirit of America Dance Stars and Spirit of America Cheer. These groups combined feature more than 1,000 of the nation’s very best performers recruited from small towns and big cities. Days before Thanksgiving, they will gather for the first time in NYC, ahead of their once-in-a-lifetime national spotlight. Adding to the dance floor revelry will be 34th & Phunk, a special group commissioned and produced by Macy’s with organizers from the United States Tournament of Dance. Choreographed by the legendary artist Willdabeast Adams and acclaimed dancer Janelle Ginestra, 34th & Phunk will be a one-of-a-kind hip-hop dance crew featuring performers of all ages and from all walks of life, who have a passion for dance and precision movement. Bringing a Broadway flair to the spectacle will be the talented kids of Camp Broadway, who this year have auditioned and selected dancers/singers from military bases around the nation, and who will pay tribute to America with their performance. Rounding out the performance group list are the zany Red Hot Mamas (Post Falls, Idaho) who will deliver their signature humorous take on the holiday season, along with the whimsical stars of the Big Apple Circus (New York, NY).

This year the magic of Macy’s iconic balloons and Parade artistry will head south for the winter to give fans an up close and personal experience for the holidays. Starting on Saturday, Nov. 18, Universal Orlando Resort’s destination-wide Holidays celebration begins, featuring the all-new “Universal’s Holiday Parade featuring Macy’s.” This one-of-a-kind experience is where merry and mayhem mesh to create a fantastic treat for park guests that features more than 15 incredibly detailed floats, colorful stilt-walkers and characters, and a specially created cast of all new Macy’s balloons that you can’t see anywhere else. Universal’s Holiday Parade featuring Macy’s will run daily from Nov. 18 through Jan. 6.

The 91st Annual Macy’s Thanksgiving Day Parade will begin at 9 a.m. from 77th Street and Central Park West. The procession will march to Columbus Circle, turn onto Central Park South and march down 6th Avenue/Avenue of the Americas. At 34th Street, the Parade will make its final turn west and end at 7th Avenue in front of Macy’s Herald Square. “A Holiday Treat for Children Everywhere” has been the guiding motto of this annual tradition for more than nine decades and is the mandate that continues to this day.

For more information on the Macy’s Thanksgiving Day Parade,  visit www.macys.com/parade  or call the Parade hotline at 212-494-4495. Follow @macys on various social networks and join the conversation using #MacysParade.