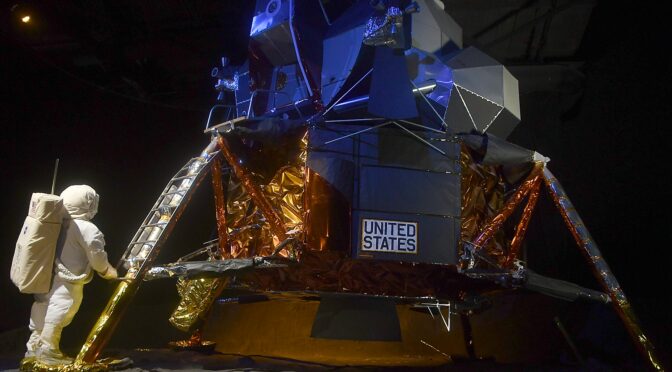 Nassau County Executive Laura Curran, who donned a replica space suit, and NASA astronaut Babylon resident Bill Shepherd were on hand at the Cradle of Aviation Museum to officially begin the countdown to the 50th Anniversary celebration of the first lunar landing, July 20, 1969. They were joined by Grumman Engineer Ross Brocco, Museum President Andy Parton and Museum Curator Josh Stoff.

“We will shine a light on one of the greatest human and technological achievements in history,” Parton said.

The events that start at 9:30 am reach a climax with a Community Countdown at 4:17 pm to collectively watch, re-experience, and honor as a community, the historic “The Eagle has Landed” Lunar Module landing on the moon. A model of the Lunar Module will descend from the ceiling, precisely on time.

Astronaut Shepherd, who was in the first crew on the International Space Station (“We turned on the lights”) and lived in space for 140 days, sees the importance of Cradle of Aviation Museum, with its active STEM education programs and the ability for people, young and old, to interact with exhibits – like climb into a Gemini capsule, land a Space Shuttle, and in the current exhibit, enter a space habitation on Mars, and the largest collection of Apollo artifacts in the world, including an actual lunar module which was built by Grumman in Bethpage for Apollo 19, a moon mission that was scrubbed.

“The lunar landing was one of humankind’s epic achievements,” said Shepherd, who will be on hand during the day to interact with museum goers. “Beyond Apollo, it ignited a process that is still going on. NASA is on course to go back to the moon, a steppingstone to planetary expedition to Mars. Children today may take part.”

It’s critically vital, he said, for children to have the opportunity to be exposed to “first-hand” science, as opposed to watching documentaries on television. “Education is turning to project-based and experiential learning, versus textbooks. Here, kids get to see for themselves. The tangible makes learning enjoyable.”

Curran pointed to the Cradle of Aviation as one of the best museums – even attractions – on Long Island. “It is such an asset in the heart of our county..

On July 20, in addition to the Apollo events, there will be former Grumman engineers and employees who helped build the lunar module and the equipment that made the space program possible, among them Ross Bracco, a structural engineer at Grumman who is now a volunteer at Cradle of Aviation Museum. Shepherd will lead two “episodes” allowing kids to design their own lunar lander.

Shepherd noted that the moon, itself, remains a mystery – how it was created more than 4 billion years ago – was it knocked off from earth or form separately? “We don’t know but maybe some kids here will research.” He said the moon has been static for 4 billion years, unlike the earth which is “dynamic” and changing, so is a time piece that can shed light on what the solar system was like 4 billion years ago. “We are learning about the moon’s relationship to the earth.”

And you can even get a whiff of what the moon smells like in one of the exhibit.

On Saturday, July 20, 2019, thousands of people will be joining together at the Cradle of Aviation Museum to celebrate the 50th anniversary of the historic Apollo 11 mission. The Cradle of Aviation, home of the Lunar Module, is celebrating all day and night with two festive events to give the community an opportunity to learn, reflect, remember, & jointly celebrate, all the wonder, achievement, and pride that is Apollo.

There will be events throughout the day:

Then, from 7-11 pm, is the Apollo at Countdown Celebration, a lively dinner and champagne toast with music and dancing, as the community comes together to watch and re-experience the unforgettable first steps on the moon at 10:56 pm with a special moon landing viewing and countdown.

Tickets to either event can be purchased at www.cradleofaviation.org/apollo or by calling Reservations 516-572-4066 (M-F) 10:00am-4:00pm) Grumman Retirees and Museum Members, may call Reservations for discounted tickets. Proceeds to Benefit Museum Education and Preservation Programs.

But the reason there is such a world-class space and aviation museum here on Charles Lindbergh Avenue, named for the famous aviator, is that this is indeed the cradle of aviation – it is located on what was Mitchel Air Force Base Field, which, together with nearby Roosevelt Field and other airfields on the Hempstead Plains, was the site of many historic flights , most significantly, where Lindbergh set off for his historic transatlantic solo flight to Paris and it was on Long Island that so much of the aviation industry and innovations happened. In fact, so many seminal flights occurred in the area, that by the mid-1920s the cluster of airfields was already dubbed the “Cradle of Aviation”, the origin of the museum’s name.

The events and exhibits also pay homage to Grumman engineers who designed and built the lunar exploration module (LEM), and there is an actual LEM on exhibit – the only actual LEM of the three modules on exhibit (the three that went to the moon remained there). This one was built by Grumman for Apollo 19 but that mission was scrubbed.

You can also see mock-ups of Grumman engineers in a “clean room” building a LEM.

Cradle of Aviation museum has the largest collection of Apollo artifacts anywhere – the space exhibits are phenomenal and include simulators and a real moon rock.

And so it was fitting at one of the Apollo 50th events held in recent weeks, the Gold Coast International Film Festival screening of “First Man,” as part of its Science on Screen series, three former Grumman engineers who worked on Apollo project related their experience.

Howard Frauenberger, who was a co-op engineering intern running technical tests on the Lunar Excursion Module landing gear and in the Cold Flow area for final ascent & descent stage system tests before delivery to NASA, reflected,  “Had we never had the Apollo1 tragedy, where three astronauts were lost, the likelihood of doing a successful lunar landing was low…The  post-fire evaluation of the design of command module found so many things inadequately or improperly or stupidly designed- not the least was the hatch which opened in instead of out so that in a pressurized environment, it couldn’t open. NASA’s oversight over all the contractors doubled or tripled. So the prevailing theory is that if that fire hadn’t happened, design defects could have caused a situation where Apollo 11 couldn’t land.”

Richard Dunne, who was the chief spokesman for the Grumman Corporation, which  designed  and  built the Apollo  Lunar Module: “The fire forced a redesign of everything in the command module and lunar module.” He also reflected on how close it was that the United States might not have won the space race at all “Two weeks before Apollo 11 launched, the Russians attempted moon shot, but it exploded. The way the United States knew about it was because our spy satellites detected it.”

Mike Lisa, who worked as an engineer on the Lunar Excursion Module in 1963 until the program ended and spent 36 years at Northrop Grumman, said, “The most important thing was to bring the astronauts back healthy. A device called a tumbler would grab the LEM on both sides and flip it around – tumble and turn – to shake anything that might have been loose inside. On this particular day, I was working in a semi-clean room – we wore white jackets and different hats to show what we working on – and tumbling, there was a clink and a nut fell on the floor. The NASA inspector was there and shut the room down for a whole week, but we all had to be on station, 24/7, waiting for permission to reopen.”

Cradle of Aviation Museum originally opened with just a handful of aircraft in the un-restored hangars in 1980. A major renovation and expansion program in the late 1990s allowed the museum to re-open in a state-of-the-art facility in 2002. Additional expansion plans are currently under development. The museum is an educational center preserving Long Island’s contribution to aerospace, science and technology by inspiring future generations through learning.

The Cradle of Aviation Museum and Education Center today is home to over 75 planes and spacecraft representing over 100 years of aviation history and Long Island’s only Giant Screen Dome Theater.  The museum has been celebrating  “Countdown to Apollo at 50” sponsored by the Robert D.L. Gardiner Foundation, through much of the year, showcasing Long Island and Grumman’s significant role in the Apollo program. The Museum was recently recognized and listed on New York State’s National Register of Historic Places as a significant part of American history. The museum is located on Museum Row, Charles Lindbergh Blvd., in East Garden City.  For more information call (516) 572-4111 or visit www.cradleofaviation.org.