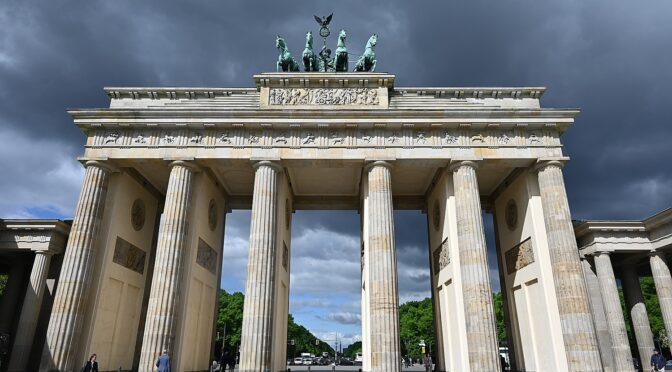 Berlin is a surprise. The last time I was here, which was just after the fall of the Wall, it seemed dark, grey. Berliners were literally chipping away at the Berlin Wall, selling the graffitied pieces (the first act of Capitalism).

Now, I find the city bright, bustling and building. And an interesting amalgam of how Germany’s various historical époques, even the Soviet era, have been integrated in the reconstructed city after World War II.

What is most interesting to me, especially as we stop at the Brandenburg Gate, is how Nazism seems to have been ripped out from the roots, like weeds from a garden.

There is still some evidence of Soviet control, especially as we go through what would have been East Berlin (later, at Potsdam, we will learn the backstory of how Berlin was divided).

The Elbe Princesse is docked in a lovely neighborhood park in one of the city’s 12 districts. We have a bus-tour today, which I am grateful for because the city is really vast and I only have one day here, but it is soon obvious, you need to spend at least two or three days.

Our guide, Sylvia, gives us a bit of history as we travel from district to district, neighborhood to neighborhood.

We drive around the Victory Column – Hitler had it moved in the 1930s as part of his plan to make Berlin the capital of the World, Germania. To cement his dictatorship, the Nazis set fire to the Reichstag, and blamed the opposition as an excuse to exert martial law.

We get out to walk around, stopping first at the new memorial to the Sinti and Roma murdered in the Holocaust. Out of 2.5 million Sinti & Roma, only 5000 survived (the German word for gypsy, Zigeuner, means trash and is forbidden).

Very close to the Brandenburg Gate is the Reichstag – the Parliament Building. People are lined up to tour the building, and can go up to a modernized glass dome.

The Brandenburg Gate, which dates from 1791, was part of the original wall around Old Town, and is the only one of 18 historical gates still remaining. “It survived 300 years, 2 world wars, 2 dictatorships, 1 wall.”

In 1806, Napoleon arrived in Berlin after defeating Prussians, entering through center of gate. He promptly “expropriated” the sculpture on top of the gate.

For 20 years, the Gate was in a no-man’s land between East and West Berlin, and could not be visited. Then, in November 1989, the wall came down.

All the buildings that flank the Gate were built after 1989, Today, the US Embassy and across from the embassy, a Holocaust memorial that opened in May 2005, 60 years after the end of World War II in Europe.

New York architect Peter Eisenman, who won a design competition to establish a central memorial site, the Memorial to the Murdered Jews of Europe, placed 2,711 concrete slabs of different heights that appear as graves or coffins (the heights, Sylvia said, are supposed to represent the number of Jews killed in a place). The 19,000 sq. meter area is open day and night. The memorial is intentionally set on a slight slope and its wave-like form is different wherever you stand.

The memorial to the Shoah is supplemented by the underground information center, also designed by Eisenman. In a space covering 800 square meters you can find information on the victims and the locations. Themed rooms such as the Room of Dimensions, the Room of Families, the Room of Names and the Room of Sites deal with the fates of individuals, with photographs, diaries and farewell letters. Short biographies take the victims out of their anonymity. Historical photographs and film footage show the sites of persecution and extermination. (Cora-Berliner-Straße 110117 Berlin, www.stiftung-denkmal.de/en)

In the Museum Island complex we see where there are still holes from bullets and artillery fire in the Roman columns are the city’s most important museums (which were in the Soviet zone, so that the Allies had to build comparable museums): the Altes Museum (Old Museum), the Neues Museum (New Museum) the Bode Museum, the Pergamon Museum and the Alte Nationalgalerie (Old National Gallery). The collections in these buildings encompass over 6,000 years of art and cultural history.

Sylvia tells us that because all the city’s important museums wound up in the Soviet zone, the Allies built comparable institutions in their quarter.

We pass the magnificent Berlin Cathedral, which dates back to the 15th century,.

As we pass the Royal Library, Sylvia relates that on May 10 1933, Nazis entered Royal Library, stripped the shelves, and burned the books in the square. “It’s important to keep people stupid to impose dictatorship,” she remarks. I mutter something about a Tennessee legislator who, when asked what they should do about banned books, said, “They should burn them, I guess,” to which one of my traveling companions from Munich recoiled in horror. (Max Planck and Albert Einstein gave lectures here, Sylvia notes.)

We go by Alexanderplatz, which was a market in the Middle Ages. (I spot “Stop Wars” as graffiti painted on a nearby building. There are also Ukraine flags on many buildings.)

We drive down an avenue that leads toward Frankfurt and the border with Poland. After WWII, Stalin renamed it for himself, but when Stalin died, it was renamed Karl Marx Allee (a German Jew and the ideological founder of Socialism).

The mark of East Germany’s time as part of the Soviet bloc is very clear when we arrive at a long, long wall – Sylvia said that the “first generation wall” was built in less than 24 hours. “Germans went to sleep on the night of August 12 and woke up on August 13 to find a 43 km wall built in middle of night, to separate east from west.”

Soon after the fall of the Berlin Wall and reunification of East and West Germany, 118 artists from 21 countries were invited to paint murals along a 1316-meter long stretch of the wall – the longest continuous section of the Berlin Wall still in existence. It officially opened as the open-air East Side Gallery on September 28, 1990, and a year later, was made a protected memorial.

Sylvia points us to the mural that is very possibly the most famous: “The Kiss” by Russian painter Dimitri Vrubel in 1990, It depicts Leonid Brezhnev, the General Secretary of the Soviet Union at the time, and Erich Honecker, the General Secretary of the Socialist Unity Party of the GDR, based on a photograph taken in 1979, on the 30th anniversary of the founding of the GDR. “The photographer got two years in prison.”

Sylvia also points out Berlin’s pride and joy, the Berlin Television Tower, built in the 1960s. At 368m, it is the tallest building in Berlin. (You can go to the top for a 360° panoramic view of the city.)

We are returned to the Princesse Elbe for lunch and then set out again by bus to Potsdam – famous as the place where the Allies decided Germany’s fate, split Europe, Germany and Berlin into sections, and launched the Cold War.

Potsdam, about a 45 minute drive from where we are in Berlin, is one of Germany’s most beautiful cities, and a UNESCO Heritage site.

We stop at Glienicke Bridge, known as the “Bridge of Spies”. Built in 1907, it was used as an exchange point between the Soviets and the Allies. In 1961, during the Cold War, no civilians were allowed on the bridge, only military, diplomats. To distinguish between the American and German Democratic Republic sides, you can see the dark green versus light green colors. The first exchange came in 1962: Francis Powers, who was taken prisoner in 1960 when his U-2 spy plane was shot down over Ukraine and sentenced to die, was exchanged for Soviet Colonel Rudolf Abel, a senior KGB spy. (The 2015 Tom Hanks thriller, “Bridge of Spies” depicting the events was actually shot here – they closed the bridge for a week).

We stop at Cecilienhof Palace, where the Potsdam Conference took place in 1945, and are able to walk around the grounds. The palace was built in 1917 by Crown Prince Wilhelm, grandson of Queen Victoria, who would have been next emperor if Germany had won World War I. It hardly looks like a palace – he built it in Tudor style of a country manor to honor his grandmother. Today it is a hotel and museum.

What I hadn’t known before is that Harry Truman, who had just become president after Franklin D. Roosevelt’s death, got a phone call while here, ‘The baby is born,” code for the atom bomb was ready. He gave the order from here to bomb Hiroshima, seemingly as casually as that.

The Potsdam conference also lacked another major leader, Winston Churchill. In his place, a new Prime Minister. Clement Attlee. Stalin took advantage of them both.

Sylvia relates the back-story of how Stalin snuckered Truman and Atlee: on the last morning, Stalin drew a line in red pen through Germany and basically, said, “That’s mine.” “Potsdam set up the Cold War, a proxy war,” she says.

We next go to Sanssouci, Frederick II (Frederick the Great)’s fabulous palace. (We wander the outside, but do not have time to go into it).

Sanssouci Palace is like a mini-Versailles, with stunning formal gardens. The gardens were Frederick’s passion, and he built them even before the palace. It was the first royal park ever to be open to the public, and for free. (Versailles Palace was built first then garden, but was solely for royal use.)

Frederick loved this place – it was his private refuge and he even banned his wife from visiting. He wanted to be buried at Sanssouci and had a crypt built, but his nephew buried him elsewhere; then, 200 years later, Frederick was reburied here, as he wanted, with his 11 dogs. We notice that people leave potatoes at the gravesite. “The Seven Years War was under his administration.  Potato, brought from the Indian countries of America, was a fast solution to hunger.”

Potsdam, a UNESCO World Heritage Site since 1990, became the residence for Prussia’ royal family, spawning many fabulous buildings and palaces, making Potsdam one of the most-visited cities in Germany and deserves a full day visit (you can get to Potsdam by train from Berlin).

Our tours of Berlin and Potsdam have been a very good introduction, but I would have liked to spend another two days in Berlin and a full day in Potsdam. But I am doing what many American travelers to Europe are doing this year and doubling up on trips from my bucket list. So the next morning, I get myself to the Berlin railway station, heading to Bruges. for my BoatBikeTours bike trip from Bruges to Amsterdam by bike and boat!