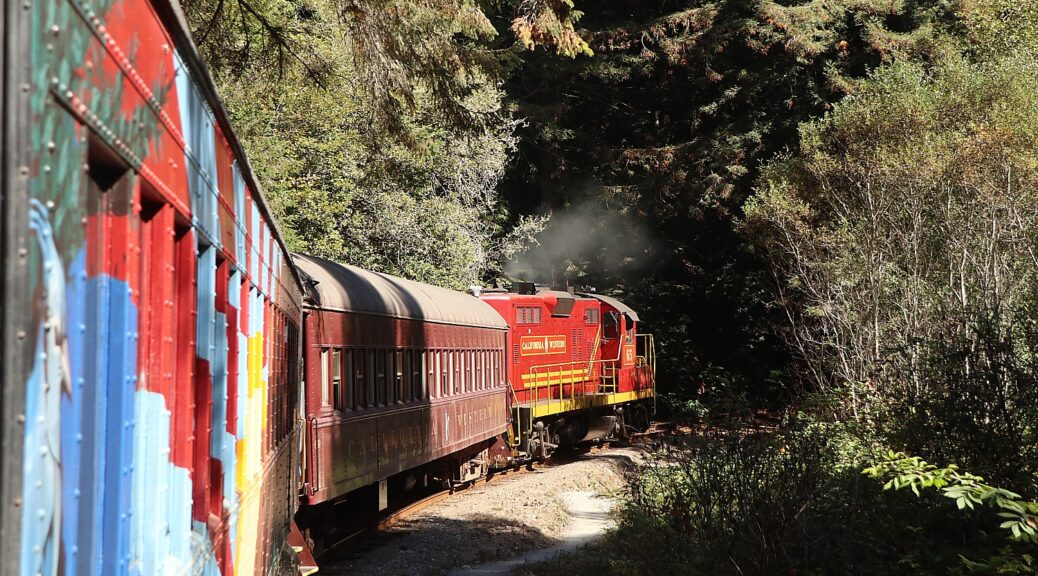 Our Mendocino, California weekend sojourn continues. From the Brewery Gulch Inn, where we stayed our first night, it is a picturesque 20 minute drive up the coast to Fort Bragg for the Skunk Train, a vintage steam train that weaves through the redwood forests of the Noyo River Canyon. That was alluring enough, but what really captured our imagination was the idea of riding a “railbike” on the same train tracks through the forest. Railbike?

Train buffs will be absolutely ecstatic to visit the historic train station, walk across the tracks to a fantastic model train exhibit and historical society exhibit housed in appropriately aged buildings (so atmospheric), then board the train for a fairly short ride about 3 ½ miles down the track along the Pudding Creek, to Glen Blair Junction before returning, for a total of 7 miles. Weather permitting, you can ride an open car or sit inside the vintage cars.

Since 1885 the historic Skunk has made its way through these old-growth redwood groves, over scenic trestle bridges, through tunnels, and into the heart of the Noyo River Canyon, primarily for logging purposes. Today, the repurposed train offers five trains that ply two different routes and two different railbike experiences.

Two of us have already gotten onto our railbike (it seats two people) – custom-built, patent pending, specially designed like a recumbent, where you sit back, outfitted with electronic-assist, and virtually silent so you can really appreciate the forest.

We take the more modest of the railbike trips that are offered, The Pudding Creek railbike trip, which gives you an excellent taste and can be done by just about anyone. It is 7 miles roundtrip traveling along the same tracks as the scenic train – in fact, the trips are coordinated so the railbikes leave first, then the train, then the train leaves and the railbikes follow. (Note: it is downhill most of the way but uphill most of the way back, along a grade that is higher than most railroads – no problem, you have the motor assist!). There are two guides who accompany us – one in front and one in the back. People follow one after another but everyone is independent.

One person is designated the “driver” (the other is the passenger) who is given an orientation before we set off how to brake and use the electronic assist; the passenger just pedals (it is manageable for a parent and young child). It is fun, and you get this wonderful opportunity to just chat and be together as you roll through the forest.

The Puddle Creek railbike excursion takes less than two hours, including time at Glen Blair Junction where we get off (as the railbikes are reversed for the return), and can walk a delightful forest loop trail.

This gives the historic train time to arrive, the train passengers to also get out and stretch, and depart before the railbike riders start back. The guide gives us some narration here and points to where the train tunnel has collapsed.

While Eric and I set out on the railbike, Sarah boards the train at the Fort Bragg depot for the relaxed, scenic 7-mile roundtrip journey on the Pudding Creek Express, traveling along the same Pudding Creek Estuary through primeval ancient redwoods forest to the Glen Blair Junction.

Trains also stop at Glen Blair Junction for 15 minutes, allowing the passengers to get off and explore. But if you would like to spend more time walking the trails among the redwoods, you can stay behind and catch the next train (roughly two hours later). You can bring a packed lunch (to enjoy at the picnic tables set out there.

We organize it so I switch off with Sarah who has come on the train so she can experience the railbike and I can experience the train on the way back (how clever of me since the return was more uphill). Both were delightful experiences and the length well suited to families with young children.

On the way back I hear the narrator say these were some of the first tracks ever laid down by the California Western Railroad in 1885 and have been used in some fashion just about ever since. He claims it is also the most crooked train in the West, possibly the world (though I would need confirmation of that). 1940s music is playing as we roll along. I mostly stay in the open car but wander through the passenger cars to see what that is like.

The Skunk Trains operate with both Diesel-Electric engines and a #45 Baldwin 2-8-2 Mikado Steam Engine, the Super Skunk, pulling the passenger cars, including a bar car with snacks, non-alcoholic drinks, beer, wine, and spirits, as well as an open air car.

Train buffs will love the back story of this historic train: the Fort Bragg Railroad was formed in 1885 to make transporting lumber easier, eventually being incorporated into the California Western Railroad, commonly known as The Skunk.

The train played a vital role transporting families and workers to their logging camps along the route, making The Skunk a different type of railroad, the website notes: It not only was key to the area’s economic activity but also its social and cultural life. “No other logging railroad in America has made the deep impression on American life that was created by the line from Fort Bragg – first by the natural beauty of its route and later, by the distinctiveness of its equipment,” the website boasts.

The nickname “Skunk” originated in 1925 when motorcars (actually railbuses or railcruisers) were introduced on the line. These single unit, self-propelled motorcars had gasoline-powered engines for power and pot-bellied stoves burning crude oil to keep the passengers warm, but the fumes they emitted had a very pungent odor that people living along the line said smelled like skunk. “You could smell them before you could see them.” (No longer the case.)

The California Western Railroad was first operated as a division of the Fort Bragg mill (Union Lumber Company, Boise-Cascade). In the mid-1960s, Arizona-based Kyle Railways began managing the railroad and purchased it in 1987. In August 1996, a group of local Mendocino Coast investors purchased California Western, marking the first time in its 111-year history that the line operated as an independent business. Today the Skunk Train is owned and operated by Mendocino Railway.

The Pudding Creek train operates year-round and the railbikes operate rain or shine, so just bring raingear if the weather isn’t great).

Train buffs should consider the longer excursion, the two-hour Wolf Tree Turn a scenic 16-mile roundtrip journey departing from the Willits valley floor that takes you over the summit of the line (1740 feet elevation), through Tunnel #2, and down into the Noyo River Canyon where you are immersed in the redwood forest that made Mendocino County famous. The train stops briefly at Crowley, giving passengers the opportunity to visit one of the oldest and most iconic trees along the route, the Wolf Tree (named for the large growth off of one side which woodsmen called “wolf trees”) (Adult: $49.95; child: $29.95; Infant: $10.95; Dog: $10.95).

There is a much longer, more ambitious railbike experience, as well: a four-hour excursion that travels the Redwood Route takes you 25 miles along the meandering Noyo River and deep into old-growth redwood groves on a section of track now reserved exclusively for the railbikes ($495/railbike for one or two people).

From here, it is a very short distance to go to Glass Beach in Fort Bragg – one of the absolute highlights of this place. The intriguing name and spectacularly picturesque scene belie the origins of the beach and why it is covered with tiny, shimmering pebbles of sea glass like gemstones: Rather than the sea glass floating in on waves from various places and mysteriously collecting here, the sea glass is in this space because it was once a garbage heap and the glass bottles tossed away over the years have broken down, smoothed and rounded by the rhythmic waves. There is a finite amount of glass so though it is illegal to remove any glass, people take what they think is an insignificant amount, and over the years, has drained the beach of much of what it used to have. Still, it is magical.

The water crashes against rocks just off the shore here, making for dramatic scene (but not suitable for swimming or letting kids venture into the water). You can hike north up to Pudding Creek Beach where a paved multi-use trail crosses over an old train trestle; other trails go south from Glass Beach to other glassy beaches.

Glass Beach is at the southern end of the sprawling MacKerricher State Park in Fort Bragg, which is noted for birdlife and harbor seals.

From here, we follow the Brewery Gulch Inn’s concierge recommendation to lunch at Princess Seafood in Noyo Harbor, an actual fishing port where various restaurants have sprung up to serve the fresh catch. Princess Seafood not only is totally operated by women, but the fishing boat that brings in its catch is run by women, as well.

We take the short drive into Mendocino to explore this charming place.

You literally step across Main Street from Mendocino’s charming shops and eateries to enter Mendocino Headlands State Park, a 347-acre park that envelops this enchanting village. The coastal trail is nothing less than spectacular: dramatic 70-foot bluffs providing views of rocky offshore islands, tide pools and beaches below. The hiking trail begins at the Ford House Visitor Center and continues for some 2 miles around the entire bluff of the headlands to the north side of town.

Our hike starts overlooking Noyo Bay, then snakes around to open views of the Pacific.

One of the highlights of this incomparable trail is Portuguese Beach, named for the Portuguese sailors from the Azores who were among Mendocino’s early settlers. The tide is low enough when we take the stairs down to Portuguese Beach to come upon these fabulous formations of driftwood, and can see at water level the rock arch. Eric can’t resist and with great abandon, plunges into the frigid water. The beach, its sand surprisingly soft, is aptly named, since it is reminiscent of the beaches in Portugal’s Algarve.

Continuing on the trail, we see remnants of the logging that was Mendocino’s primary industry, and, at a promontory about half-way along the trail, you take a small path to a blow hole/punchbowl where the ocean smashes up through a hole in the rocks, with a roar and a splash.

Rounding the bend, there are dramatic rock formations. Offshore and north of the west end of Little Lake Street is Goat Island, a large flat offshore rock that is part of the California Coastal National Monument where you are also likely to see various shorebirds and seabirds. Indeed, it is a good idea to bring binoculars because whales and birds can be seen throughout the year.

The visitor center for Mendocino Headlands State Park is in the Historic Ford House on the south side of Main Street near the beach. It is worth a visit especially if you are interested in local history and the flora and fauna you are likely to encounter at the beaches and on the trails nearby. Walking tours are also available. There are public restrooms at the north and south ends of the Headlands- on Heeser Drive and near the Ford House.

The Headlands trail is a fabulous place to watch the sunset – the sun literally falls into the ocean – before we head to our next destination, Little River Inn.