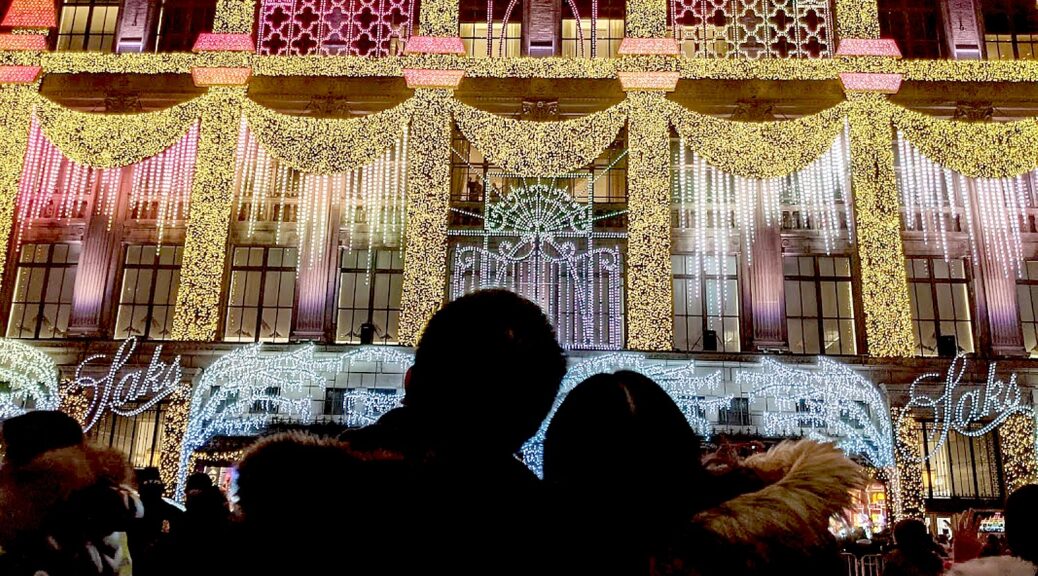 Take  a winter holiday stroll through mid-town Manhattan. There are many changes this year – mostly the absence of thick crowds, circles delineating social distancing for queues into shops, outdoor dining constructions bathed in warm light. The animated shop windows New York is so famous for – Macy’s, Saks (masks on the figures), Bergdorf Goodman– are more low key this year, themed around thanking all those who are getting us through this darkness and cheering on New Yorkers. Bergdorf Goodman, for many years in a row, getting my award for best, wins again this year with its stunning windows with dramatic messages of  Love, Hope, Goodness, Joy and Gratitude. And there are clever innovations to spread cheer: New York’s iconic symbols illuminated on the sidewalks, like a yellow cab. Saks still has its marvelous sound-and-light show illuminating its entire façade, just across the street from the Rockefeller Center tree, but it is pared down to just a few minutes so people don’t stand around too long. And there are security controls to minimize crowding and direct people to the entrance for ice skating or tree viewing. Even Atlas, the mighty ancient Greek Titan holding the heavens on his shoulders, is wearing a mask.

Come, walk with me:

WHERE TO GO FOR HOLIDAY CHEER: NOTHING STOPS NYC’S TRADITIONS, ICONIC EVENTS 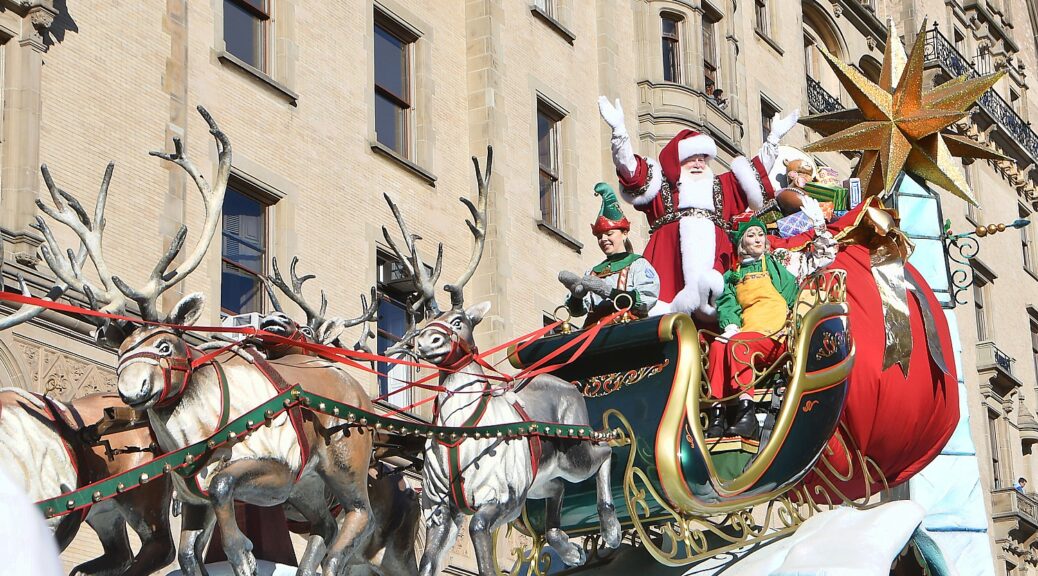 Here are some of the festive events, performances and activities across the boroughs to celebrate the holiday season in New York City.

Balloon Inflation, November 27, 1-8 pm: Head up to the American Museum of Natural History on November 27 from 1 to 8 pm to watch the balloon inflation at West 79th Street and Columbus Avenue but be prepared for long lines (entrance at 73rd and Columbus.)

Holiday Lights at the Bronx Zoo, November 21–January 5, Fordham, the Bronx: Returning for the first time since 2007, the stunning light displays at the Bronx Zoo will cover several acres in a walk-through experience with wildlife-themed LED displays, custom lanterns and animated light shows.

The Origami Holiday Tree at the American Museum of Natural History, November 25–January 12, Upper West Side, Manhattan: This beloved tradition includes a 13-foot tree and 1,000 origami models. The signature Origami Holiday Tree, themed “Oceans of Origami” this season, has been a part of the celebrations for more than 40 years.

Historic Richmond Town Candlelight Tours, December 14–21, Staten Island: This Christmas season, experience the tastes and scents of centuries past at Historic Richmond Town. Step back in time while touring the unique New York City which is illuminated by candles and oil lamps.

11th Annual Latke Festival at the Brooklyn Museum, December 16, Prospect Heights, Brooklyn: One of New York City’s most unique and delicious holiday tasting events, the Latke Festival is a charity event that celebrates the best and most creative potato pancakes.

Four Renditions of the Holiday Classic A Christmas Carol

An unforgettable Broadway experience, Christmas Carol at the Lyceum Theatre will run November 7-January 5 with a new, enchanting interpretation of this holiday masterpiece.

For a unique venue, head to the 1832 Merchant’s House Museum in Greenwich Village, as an actor portraying Charles Dickens shares this memorable story November 29–January 4.

The Players Theatre will bring Charles Dickens’ timeless tale to life in their 11th annual A Christmas Carol the Musical December 1–20 in Greenwich Village.

Three Extraordinary Versions of The Nutcracker:

The Salzburg Marionette Theatre’s The Nutcracker is coming to Flushing Town Hall in Queens on December 4 with a historical puppet cast bound to entertain children and adults alike.

The Brooklyn Nutcracker at Kings Theatre transforms familiar characters and scenes to represent the diverse traditions and vibrant culture of Brooklyn on December 14.

The Shops at Columbus Circle has kicked off its fourth year of Broadway Under the Stars, a five-week series of free public performances taking place this holiday season.Select cast from today’s hottest Broadway musicals will perform against the backdrop of the destination’s famous 12 massive stars. These stars, one of the largest specialty crafted exhibits of illuminated color displays in the world, are suspended from the 100-foot-high ceilings. Performances, lasting 20 minutes,  begin at 5 pm and are free to attend and open to the public, no reservations or tickets are required. (Nov. 11, Waitress, Chicago, Oklahoma!andThe Lightening Thief; Nov. 18, Come From Away, Rock of Ages; Nov. 25: Dear Evan Hansen, The Illusionists, Frozen; Dec. 2: Beetlejuice, Tootsie, Mean Girls; Dec. 9: Phantom of the Opera, Wicked). Additional Broadway Under the Stars offerings include specialty cocktails from the Shops at Columbus Circle’s Restaurant and Bar Collection which includes Monday night drink specials like Center Bar’s Pomegranate Smash cocktail ($16). Visit www.theshopsatcolumbuscircle.com for more information and list of events and happenings.

Shop at Your Hotel: Several hotels are home to retail pop-ups this holiday season, partnering with iconic stores to make shopping easier than ever for visitors. ​

Loews Regency New York Hotel and Bloomingdale’s are teaming up to bring a curated selection of holiday gifts to the lobby lounge November 29-December 24, including on-site monogramming of leather gifts by ROYCE New York.

Conrad New York Midtown is launching the first FAO Schwarz Holiday Suite, filled with shoppable toys, stuffed animals and gifts that will be restocked for visitors who book a stay in the suite November 18–January 5. Additionally, all guests during this time period will be able to order gifts on demand to their suite or home address.