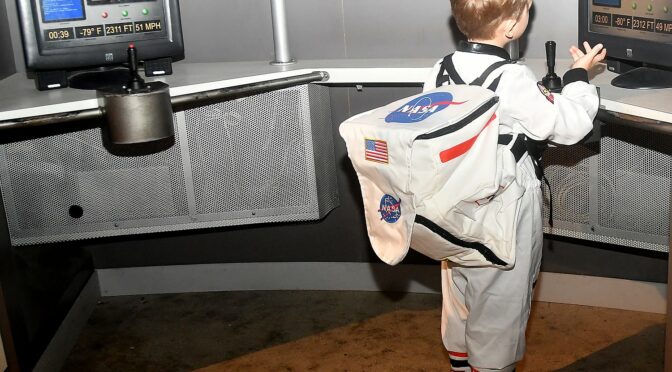 Throughout this year, the Cradle of Aviation Museum in Uniondale, Long Island, not far from where the lunar module was designed and built by Grumman engineers in Bethpage and a stone’s throw from Roosevelt Field where Charles Lindbergh took off for his historic transatlantic flight to Paris, has been hosting special events to mark the anniversary, use it for STEM education and inspire a new generation eager to reach for the stars.

The events climax on July 20, when at the exact same moment as Neil Armstrong made his “giant leap for mankind”, a replica lunar module will descend from the ceiling. Museum goers also can see an actual lunar module, one of the six that Grumman built (three are still on the moon, and the other three are in the Smithsonian’s National Air & Space Museum in Washington DC, the Kennedy Space Center in Florida and here at the Cradle of Aviation Museum).

One of the extraordinary exhibits on view at the museum now is “Space: A Journey to Our Future,” which is on view through August 18, 2019, an absolutely thrilling, immersive exhibit which takes you from the dawn of man’s earliest visions of space exploration to the heroic achievements of the past, the unfolding discoveries of today, and the frontiers of the universe that lie ahead. You get to touch actual rocks from the lunar surface and the red planet, explore a futuristic Lunar Base Camp while walking through a full-size space habitat and work pod, get an up-close look at a wide range of artifacts from the space program and experience the past, present and future of space through these and dozens of other displays, interactive (try your hand at landing the space shuttle!) and experiences.

Also, as part of this special celebration, the museum is showing Todd Douglas Miller’s new documentary film, “Apollo 11: First Steps Edition,” a special giant-screen edition created exclusively for science centers and museum theaters, like Cradle’s Dome Theater. With a newly-discovered trove of never-before-seen 70mm footage and audio recordings, APOLLO 11: First Steps Edition joins Neil Armstrong, Buzz Aldrin and Michael Collins, the Mission Control team and millions of spectators around the world, during those momentous days and hours in 1969 when humankind took a giant leap into the future.

The “Apollo at 50: Moon Fest,” on July 20 will be a family festival (9:30-5 pm, with activities 12-4pm) with visits from Long Island Space Shuttle Astronauts including Bill Shepherd (Babylon) and Charlie Carmada (Ozone Park). All day activities include virtual reality experiences, model rocket launches, and a countdown at 4:18 pm to collectively watch, re-experience, and honor as a community, the historic “The Eagle has Landed” Lunar Module landing on the moon. As a special bonus, all museum attendees will get a free showing of the new highly-acclaimed documentary, Apollo 11 First Steps Edition in the immersive Dome Theater. (Tickets: $20)

Then, in the evening, there will be a Countdown Celebration, a lively dinner and champagne toast with 1960s music and dancing, as the community watches and re-experiences the unforgettable first steps on the moon at 10:56 pm with a special moon landing viewing and countdown. There will also be photo opportunities in a re-created 1969 living room.  (The dinner event ticket includes admission to Apollo Moon Fest events during the day; tickets: $125).

The Cradle of Aviation Museum and Education Center is home to over 75 planes and spacecraft  representing over 100 years of aviation history, from hot air balloons to the lunar module, in eight galleries, a planetarium and Long Island’s only Giant Screen Dome Theater.

The Cradle of Aviation Museum commemorates and celebrates Long Island’s part in the history of aviation and space exploration. It is set on land once part of Mitchel Air Force Base which, together with nearby Roosevelt Field and other airfields on the Hempstead Plains, was the site of many historic flights. In fact, so many seminal flights occurred in the area, that by the mid-1920s the cluster of airfields was already dubbed the “Cradle of Aviation”, the origin of the museum’s name. The Museum was recently recognized and listed on New York State’s National Register of Historic Places as a significant part of American history.

The museum originally opened with just a handful of aircraft in the un-restored hangars in 1980. A major renovation and expansion program in the late 1990s allowed the museum to re-open in a state-of-the-art facility in 2002. The museum is undergoing a major fund-raising campaign for a future expansion.

It is remarkable to contemplate that within a century, aviation went from the Wright Brothers to the moon, from a dangerous sport to mass transportation and commercial enterprise, and Long Island played a significant part.

It starts with Long Island’s geography: a natural airfield, on the eastern edge of the United States, the western edge of the Atlantic Ocean, adjacent to a major population center, and Hempstead Plains, the only natural prairie east of the Allegheny Mountains, writes Joshua Stoff, Curator, Cradle of Aviation Museum.

We trace flying back to the Wright Brothers at Kitty Hawk, NC in 1903, lasting 59 seconds over a distance of 852 feet but Stoff notes that the first recorded aircraft flight took place on Long Island, in 1896 when a Lilienthal-type glider was flown from the bluffs along Nassau County’s north shore. By 1902 gasoline-powered airships were flown over Brooklyn (why doesn’t Long Island get more credit?). By 1910, there were three airfields operating on the Hempstead Plains, Long Islanders were building their own planes, and there were several flying schools and aircraft factories that made Long Island “the center of the aviation world.” Exhibits show artifacts of these early pursuits.

Belmont Park hosted the 1910 International Aviation Meet of the greatest aviators from America and Europe.

“The period between 1918 and 1939 is considered the ‘Golden Age of Aviation’ when flying went from being a dangerous sport to a major commercial industry,” Stoff writes. Most famous of all was Charles Lindbergh’s historic solo transatlantic flight, from Roosevelt Field to Paris, in 1927. “This single event revolutionized aviation as nothing else before or since…

“By the early 1930s Roosevelt Field was the largest and busiest civilian airfield in America with over 150 aviation businesses and 450 planes based there. In 1937 the first regular commercial transatlantic airline service in America was begun at Port Washington as huge Pan American Martin and Boeing flying boats departed and arrived regularly at Manhasset Bay.”

World War II sparked aviation and demand for aircraft. The two biggest aircraft companies, Grumman, was founded in Long island in 1930; Republic in 1931. They produced most of the military aircraft; other companies, Sperry, Brewster, Ranger, and Columbia, also contributed to the war effort. By 1945, 100,000 Long Islanders were employed in the aircraft industry.

Though aircraft are no longer manufactured on Long Island (the Grumman plant in Bethpage is now a movie and television studio), it is surprising to realize that there are still 240 Long Island producing parts for virtually every American aircraft that flies.

Long Island’s important contribution to aviation is brilliant displayed in exhibits throughout the halls.

Thomas J. Kelly, of Cutchogue, retired president of the Grumman Space Station Integration Division and formerly lunar module engineering director, writes that there is still some Long Island left on the moon – six spacecraft built on Long Island remain on the moon,

Designing and building those craft, as part of the greater challenge of beating the Russians to the moon by 1969, was a monumental endeavor. Writing on the occasion of the 30th anniversary of the moon landing, Kelly reflected, “For some 7,000 Grumman employees, however, it was far more intimate than an issue of national prestige. We felt personally empowered to put Americans at the edge of a frontier that even today seems incomprehensible. Yet not only did we succeed in meeting the mission; the efforts of our nation’s commitment to lunar exploration also inspired people around the world and showed the finest possibilities of human achievement and of creating technology that now helps to power our society…

“Nobody at Grumman who worked on the LM will ever forget it. Even the 12-and 14-hour weekdays, the frustrating paperwork and the sheer complexity of designing, building and testing the module could not dim our dedication. From the sweeper to the chief engineer, we all knew that we were part of a majestic endeavor, that we were making history happen.”

At the gala, I meet Richard A. Hoffman sitting in front of the museum’s own actual lunar module, built by Grumman in Bethpage. He was a metallurgist who determined what the different parts should be made of aluminum for the struts, titanium for the propellant tanks, stainless steel propellant lines, high output silver and silver oxide batteries. He had to figure the pyrotechnics that would cause the four bolts that secured the module on the descent, to burst at just the right time with guillotine cutters for lift off from the moon. Hoffman told me he came to Grumman in the summer of 1963, and got a job there right after graduating Brooklyn Polytech in 1964. He was in just the right place at the right time, when Grumman started working on the Apollo program and he was transferred to engineering.

Next: Apollo Astronauts Look Back During Gala at Long Island’s Cradle of Aviation Museum Marking 50th Anniversary of Lunar Landing