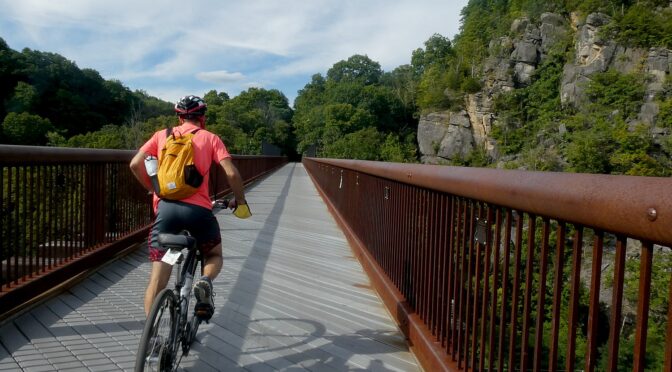 The ambitious New York Empire State Trail is taking shape, linking and connecting and improving existing trails for a 750-mile network that will enable bikers, hikers, recreational users go from New York City to the Canadian border, and from Buffalo to Albany. And it seems like it is on track for completion by the end of the year, when it would become the longest multi-use state trail in the nation.

We headed out to one of the trails, Wallkill Valley Rail Trail, newly incorporated in the Empire State Trail, with signage and improvements (new trestles, bridges, widened paths, improved drainage), from New Paltz, which itself is a hub for some marvelous multi-use trails that collectively form the Hudson Valley Greenway Trail (www.ny.gov/empire-state-trail/routes-empire-state-trail).

It was pure delight. The linear trail through forests, beside and over creeks, passed dramatic rock formations, is 22 miles long (so 44 miles, out and back). Because of time limitations (and the fact the trail has some closures north of the Rosendale Trestle, midweek, for improvements that are expected to be completed in October, check the site), we only went seven miles north of the parking lot at Sojourner Truth Park in New Paltz, but can’t wait to return to do the rest, another 7 miles north to Kingston, and 7 miles south to Gardiner. The northern half of the trail, from New Paltz to Kingston, has been incorporated into the Empire State Trail, with new signs and improvements.

Shortly after the Wallkill Valley branch of the New York Railroad closed in the 1980s, the Wallkill Valley Land Trust purchased the12-mile stretch of the corridor between New Paltz, south to Gardiner, leading to the opening of the first stretch of trail in 1993. Today, the trail stretches a total of 24 miles and runs along its namesake river from Gardiner to Kingston.  In 2009, the northern section was purchased, extending the linear park 11.5 miles north from Rosendale through Ulster to Kingston, incorporating the dramatic Rosendale trestle, a 940-foot bridge across the Rondout Creek that provides one of the most thrilling parts of the ride. This portion of the trail, from New Paltz to Kingston, has been designated as part of the statewide Empire State Trail, which, when complete next year, will stretch 750 miles, running from New York City to Canada and from Albany to Buffalo. (info at Wallkillvalleylt.org,  845-255-2761).

The sights are marvelous, and the trail very pleasant.

We find our way from the New York Thruway to the Sojourner Truth Park along the river (where you can rent kayaks),  park the car and set off, north.

We soon come to a repurposed train station, now the Rail Trail Cafe, right on the trail.

About a mile north of the village, the trail crosses the Wallkill River on the Springtown Truss Bridge, featured in the movie “A Quiet Place” with magnificent views.

The trail passes besides orchards, organic farms, lakes, streams and the Wallkill River.

In Rosendale, the most memorable feature of the trail can be found, the Rosendale Trestle. This 940-foot-long continuous truss bridge carries the trail 150-feet high over the Readout Creek, and spans both route 213 and the former Delaware and Hudson Canal.

We ride a little further north beyond the Rosendale Trestle, and come to the Binnewater Historic District where local quarries produced Rosendale cement. (I subsequently learn The Rosendale Cement Works near Limewater employed 5,000 workers and produced 4,000,000 barrels of cement a year at the peak of its activity at the turn of the century. Rosendale cement was used in the Brooklyn Bridge, the pedestal of the Statue of Liberty, the U.S. Treasury Building, as well as in many other structures around the country. The decline of the cementworks in this area is what accounts for the rail line being abandoned, and subsequently repurposed for the recreational trail. You can still see mines used to extract the cement,)

Here, though, we see magnificent rock formations – what looks like a cave from which it feels as if air conditioning were flowing and we sit on a boulder to have a snack before turning back.

Notes about the trail say that were we able to continue biking north, we would come to great views of Third Lake, Fourth Lake, and Fifth Lake before passing under Interstate 87 alongside Hickory Bush Road. The northernmost stretch of the trail runs through a scenic forested area before reaching its terminus at a parking area off of New York State Route 32 just south of Kingston. However, the City of Kingston and Ulster County are exploring options for extending the trail into the city. Meanwhile, the Empire State Trail is adding roadway enhancements to run the trail along roadways into the city, where it can connect with other projects currently underway, including the Kingston Point Rail Trail and the Ulster County Midtown Linear Park which runs out towards the O&W Rail Trail.

Riding back, we come to the Café in the Woods, set up for musical performances, where you can purchase food from what looks like a gypsy caravan, and an outdoor kitchen with a wood-burning stove.

Here is where we see Happy Trails Bike Rental (917-443-3600; call in advance) set up right on the trail, (you should call in advance to make sure he’s around). (There are a couple of bike rental shops in the area).

It’s late afternoon by the time we ride back south to the Sojourner Truth Park, but if we had time, we would have wanted to complete the trail the further 7 miles to Gardiner.

The southern end of the Wallkill Valley Rail Trail is at Denniston Road in the Ulster County town of Gardiner. True to the corridor’s original use as a rail line, the trail is generally flat. However, especially at this southern end, the trail is unpaved and best suited in the summer for hikers or for bicycles with wider tires.  (www.traillink.com/trail-itinerary/wallkill-valley-rail-trail)

New Paltz has become a regional hub for trails, with the Wallkill Valley Rail Trail running as the spine through the village. To the east, carrying the Empire State Trail up from New York City, is the Hudson Valley Rail Trail (which I have done in the past and found fantastic). This trail connects with the Walkway Over The Hudson’s western end in Highland – which has become one of New York State’s most popular attractions –  and as a part of the Empire State Trail’s investment, was recently extended from its previous terminus in the town of Lloyd all the way through to New Paltz where it connects with the Wallkill. Running west from New Paltz, a newly opened River-to-Ridge Trail  amidst the magnificent scenery of the Shawangunk Mountains.

Indeed, the next weekend, we return to bike the River-to-Ridge Trail (www.openspaceinstitute.org/places/river-to-ridge-trail) which was created by the Open Space Institute in partnership with Mohonk Preserve (www.mohonkpreserve.org) with support of the Butler Conservation Fund and only opened in 2018. This is a surprisingly hilly, gravel trail, about six miles long, that runs from the Wallkill River up through newly protected lands adjacent to fields, to 90 miles of carriage road trails on the grounds of the Mohonk Preserve, Mohonk Mountain House, and Minnewaska State Park Preserve.

Developed and managed by the Open Space Institute, the trail is a scenic and recreational off-road loop. It meanders through farm fields and over gently rolling hills, connecting New Paltz directly to the Shawangunk Ridge and 90 miles of recreational carriage roads and trails at the Mohonk Preserve and the Minnewaska State Park Preserve (https://parks.ny.gov/parks/127); the Wallkill Valley Rail Trail; and the Empire State Trail.

We also go for cider tasting, fruit picking, and have pizza, prepared in a wood-burning stove, enjoyed at an outdoor table (with strict COVID-19 protocols), rounding out a sensational day.

About 400 miles of the Empire State Trail network had already existed – the absolutely fantastic Erie Canalway, 326 miles from Buffalo to Albany (which we have done on the annual 8-day, 400-mile Parks & Trails NY Cycle the Erie supported biking/camping trip, ptny.org), during which you see unfurled before you 400-years of American history. Improvements to connect the Canalway have also been made.

Most notable is the work done to connect the trails on the north-south routes, from New York City (where you can ride the fabulous Hudson River Park), all the way up to Canada. This involved some 60 different construction projects, all engaging local stakeholders.

When the full 750 miles of continuous route is finished, The Empire State Trail will be the longest multi-use state trail in the nation. (see https://www.ny.gov/programs/empire-state-trail)

The Empire State Trail within the Champlain Valley goes from the Capital District to Whitehall, Wherever feasible, it is off-road along Champlain Canal towpaths. The 120- mile section from Whitehall to the Canada border at Rouses Point is on-road route primarily intended for bicyclists.

The Empire State Trail within the Erie Canalway include proposed new trail sections and link Buffalo to the Capital District.

Also, Rails to Trails Conservancy (railstotrails.org), Great American Rail-Trail, which would link up 3,700-miles of multi-use trails from Washington DC on the east coast to Washington State on the west coast (www.railstotrails.org/greatamericanrailtrail/vision).