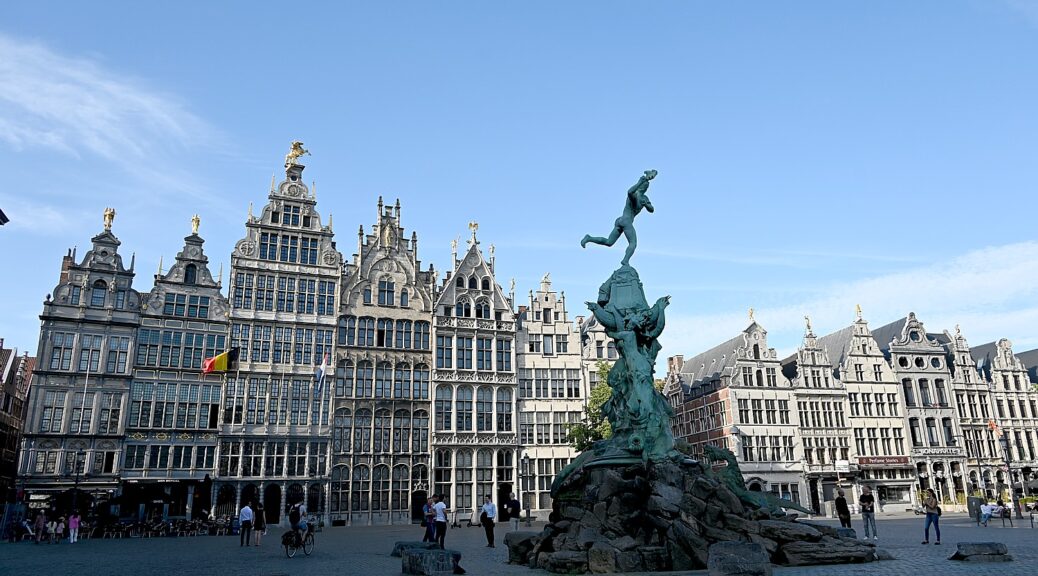 Our BoatBikeTours route on Day 4 of our Bruges-Amsterdam bike tour into Antwerp would normally involve going through an interesting 500-meter long tunnel. But our leader, Arnold Thurko, tells us that the 1930s-vintage elevators broke and they haven’t been able to find the spare parts to fix it, so we ride over a bridge and take a ferry into the city instead, which proves a delightful ride with gorgeous views of the city and a fun (quick) ferry ride.

We park our bikes (Arnold stays with them) and go off with our leader, Corrie Stein, for a guided walking tour of Antwerp’s historic city center.

Antwerp’s Golden Age was the 1500s (earlier than Amsterdam), largely because of the advantage its Suikerrui (canal) provided traders by connecting the city to the sea. (Today it is closed off but you can visit the De Ruien, the underground waterway. You get to walk along old vaulted ceilings, narrow canals, bridges, sewers and sluices, and see the city’s underbelly. You can visit The Ruien by booking a guided group walk, walk on your own with an interactive tablet at fixed times or navigate a small section of The Ruien by boat. Go to www.deruien.be).  I have this on top of my list for a return visit to Antwerp.

Antwerp was apparently spared bombing in World War II. As a result, we can still marvel at the City Hall, which dates from 1560, and a magnificent square ringed with Guild Houses, one for each guild and each with its own decoration.

The square has as its center the Silvius Brabo statue, a mythical Roman soldier. According to legend, Corrie relates, a giant, Druon Antigoon, who lived on river, would demand a toll from people who wanted to pass the bridge over the river Scheldt. If they refused, the giant would cut off their hand and throw it into the river. Brabo killed the giant, cut off his hand and threw it into the river. This is supposed to have been the origin of the city’s name, Antwerp, translated as “hand throw.”

We walk over to the Cathedral of Our Lady, built 1550-1800 in Gothic style. The belfry, 1339 meters high is included in the Belfries of Belgium and France list of UNESCO World Heritage Sites. The cathedral possesses some major works of art: including three major works by Baroque painter Peter Paul Rubens (two of which were confiscated by Napoleon and moved to France but returned to the Cathedral in the 19th century).

We get back on our bikes and ride to where our ship, the Princesse Royal, is tied up at the dock, and walk a few blocks away to the Red Star Museum, which BoatBikeTours has arranged for us to visit.

This is a fascinating museum that is a kind of bookend to our Ellis Island Immigration Museum in New York City. Indeed, Ellis Island is where 2 million Europeans who boarded the Red Star Lines at Antwerp to come to America would have wound up. But this museum does more – it tells the age-old story of migration through individual people, going back to the Neanderthal, and why migration is such a fundamental quality of being human.

The commentary doesn’t shy away from condemning phrases (that are factually true) – for example, describing the brutal, impoverished conditions these desperate people were escaping, or taken by force as slaves, or fleeing persecution, and up to modern day anti-immigrant policies and speech that has lead to the plight of so many undocumented immigrants.

Between 1892 and 1954, 12 million immigrants came through Ellis Island, with a whopping 1,004,756 entering the United States in 1907 alone. Of these, only 2% were turned away (and if were sent back, it was at Red Star’s expense, which is why, we learn, the line was so very scrupulous with their own medical evaluations)

Anti-immigrant fervor took hold in the United States after World War I; the Great Depression, effectively brought an end to migration to America. By then, almost 20 million Europeans had emigrated to America – settling the West, populating the factories of new Industrial cities. The Red Star Line ceased sailing in 1934.

The exhibits are candid about the difference in how the wealthy traveled in such luxury and style compared to those in steerage. You get to see how passengers in different classes were treated – ‘livid’ – don’t disguise how tough steerage was (but compared to what leaving?). The inescapable conclusion that steerage class was actually key to the company’s revenue and profit.

The exhibits are remarkably personal. It is amazing to see these old photos and recognize the buildings, to see postcards, passports, ID papers, and personal effects.

What I loved most is the display on the first floor which so vividly conveys the central theme: there has always been migration, from beginning of man – and they personalize with one representative person for each era – even Neanderthal.

They show what compels migration in a honest way.

Interestingly, for many, Antwerp became their final stop and today there are some 170 nationalities in Antwerp (another similarity to New York City). You can see it in the faces of school children on their outings, in restaurants that represent all nationalities.-Vietnam, Indonesia, Argentina, Italy, France.

This is the evening we are on our own for dinner. (I miss out on visiting the Red Building, which houses an important museum, but even though it is closed, you can take escalators up eight floors to see the photos of people, old and young, then climb two stories higher to the top for a view.

I go off to wander Antwerp myself and on my way back to the ship, find myself in Antwerp’s Red Light District.

I have a story to tell when we are all back on board.

The Oklahoma couple says they wound up at a French restaurant, Bistro de Pottenbrug. They saw steak on the menu and wind up feasting on flattened pig heads, escargots, eel soup in creamy base.

She asks what others’ weirdest meals have been:  Anne’s weird meal – bone marrow from buffalo; Janet’s was fish eye. Lindsey says, “Last night’s pressed pig head – but it could have been marketed better.”

What is so notable about Antwerp, which is still a major industrial city, is that in one view, you can see dozens of wind turbines, coal being shipped, even a nuclear plant billowing smoke, which we see as we sail out of Antwerp the next morning.

Antwerp is really worth a longer stay. The Antwerp City Card provides free entrance to the city’s top museums, churches, attractions and public transport; as well as some great discounts (www.visitantwerpen.be/en/antwerp-city-card).

We leave Belgium and continue on into The Netherlands.