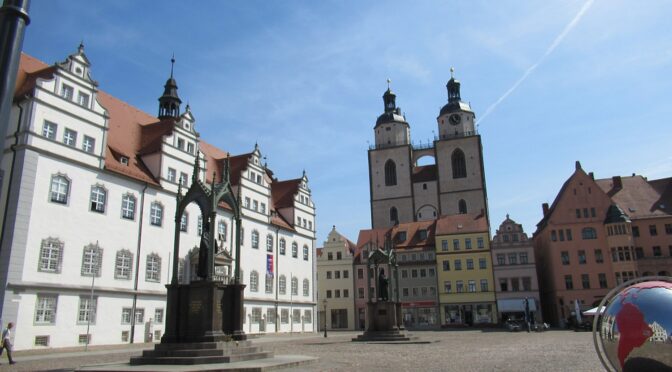 Our ship, CroisiEurope’s MS Elbe Princesse, sails early in the morning of Day 6 of our Prague-Berlin river cruise for Wittenberg, reaching this historic city, the epicenter of the Reformation lined with noble Renaissance-style houses and a marvelous way of preserving history, in the early afternoon.

The Martin Luther House, which was once an Augustinian monastery and now is the Reformation Museum, listed as a UNESCO World Heritage site, is a complete surprise – I might even say a revelation. I never expected to be so fascinated, so captivated by the unfolding of Martin Luther’s personal story so vividly depicted in the furnishings, artifacts, portraits and seeing where he actually lived, preserved pretty much as it would have been when he lived here. You begin to appreciate how one man could set a movement of such enormity – the Reformation! – into motion, how a single person could captivate and change the world.

I start off fairly disinterested but as I go through the house – the museum contains 1000 original objects from the Reformation over the centuries to the present including the many publications he put out – the answer comes quickly: the Guttenberg printing press (there is even a replica). You realize that Luther and the Guttenberg printing press were like today’s social media influencers. Indeed, by 1520, Luther had become a media sensation, unlike anything anyone had seen before.

Among Luther’s ideas that were heretical to the Catholic Church: Sins cannot be redeemed simply through confession, but faith; he reduced the seven sacraments to two, baptism and holy communion; he called ordination, confession, and last rites as “tricks of priests” to exert power. He called for the abolition of celibacy (and used that as the reason he got married, so he would not be a hypocrite); and said, “A Christian is free, subservient to no one (but subservient to all)” and he called upon the “electors and sovereigns” to implement the Reformation.

But the most controversial, which really roiled the entire institution, was the idea you can’t buy redemption with an Indulgence (the next day in a church in Magdeburg, we see the wooden box that would have been used to collect the Indulgences), and that priests can’t rid people of sin,

In June 1520, a Papal Bull accused Luther of 41 errors and gave him 60 days to recant. Instead, he created a media spectacle and burned the papal bull and other items.

Luther basically removed priests as the middle man between a Christian and his faith, and is most famous for translating the Bible into German, to make it more accessible (if I remember correctly, Jesus did the same thing to the priests).

Luther had been a monk and his wife, Katharina von Bora, a nun, given over to a convent because her family could not afford to support her, lived here for 35 years.

In what would have been their bedroom, we learn that Katarina fled the nunnery to marry Luther. A monk at the time, Luther said he should practice what he preached – abolition of celibacy. There is a wonderful quote from him (just about everything he said was dutifully transcribed by adoring followers) describing the surprising changes in his life after marriage, and the pleasures of being part of a couple. They had six children of whom four survived to adulthood.

We also see the living room where he would meet guests, have discussions with adoring followers. It’s like being in “the room where it happened” – where these ideas were formulated, transcribed, transmitted.

The couple became well to do after their marriage. Katarina, who clearly did so much to propel Luther (among the journal accounts is how she poured beer for the guests), farmed, and rented rooms to students.

Having been informed the day before to the importance of artist Lucas Cranach the Elder by my traveling companion, I am alert to seeing several Cranach paintings here, including the first authentic portrait of Luther, several others of Luther, and his monumental panel of 10 Commandments. (The English-language audio tour is invaluable to appreciating what you see.)

At this point, I am admiring of Luther and how he democratized religion, breaking the theocratic authority of the Pope and priests. But I later learn that in two of his later works, Luther expressed violent antisemitic views and called for the burning of synagogues and expulsion of Jews (I wonder if Luther regarded Judaism as a rival for worshippers.)

Luther wrote of a sculpture depicting an antisemitic scene, “Here in Wittenberg, in our parish church,” Luther wrote, “there is a sow carved into the stone under which lie young pigs and Jews who are sucking; behind the sow stands a rabbi who is lifting up the right leg of the sow, raises behind the sow, bows down and looks with great effort into the Talmud under the sow, as if he wanted to read and see something most difficult and exceptional; no doubt they gained their Schem Hamphoras from that place.” The inscription “Rabini Schem HaMphoras” was installed above the sculpture 27 years later, in Luther’s honor.

My traveling companion on the ship – who is from Munich – has told me to look for the sculpture in the church which I assume (incorrectly) is the Castle Church where Luther posted his Theses.

I still have about an hour to explore Wittenberg on my own (the rest of our group are all French-speaking and led by a guide) – really not enough time. I would have loved to have the whole afternoon to wander. But, armed with an excellent map that pinpoints 36 important sites, I set out with an aim of finding the church and the sculpture.

I head to the old market square and the Stadtkirche, also known as the Wittenberg Town Church of St. Mary’s. It was here that Luther delivered most of his sermons, and is the site of the first celebration of Mass in German instead of Latin. Wittenberg in general—and the Stadtkirche in particular—is considered the heart of the Protestant Reformation. There is a statue of Luther outside.

But on the map, behind the church, I see a street name, Judenstrasse (Jew Street) that suggests the Jewish Quarter would have been right here.

I later learn (from an article in Smithsonian, “Hatred in Plain Sight”)  that around the back of the Stadtkirche set into the facade is the carved sandstone sculpture depicting a rabbi lifts the tail of a pig to look for his Talmud that Luther referred to, that I was looking for.

“The sandstone sculpture is a once-common form of medieval iconography called a “Judensau,” or’Jew’s pig.’ Its existence predates the Nazi period by nearly 700 years. Sculptures of Jews and pigs started appearing in architecture in the 1300s, and the printing press carried on the motif in everything from books to playing cards well into the modern period,” Carol Schaeffer writes in the Smithsonian. “Today, more than 20 Judensau sculptures are still incorporated into German churches and cathedrals, with a few others in neighboring countries. At least one Judensau—on the wall of a medieval apothecary in Bavaria—was taken down for its offensive nature, but its removal in 1945 is thought to have been ordered by an American soldier. The Judensau in Wittenberg is one of the best preserved—and one of the most visible. The church is a UNESCO World Heritage site.”

(Later, at the Museum of Jewish Heritage in New York City, I see the newly opened exhibit, “The Holocaust: What Hate Can Do,” showing how centuries of culturally-embedded anti-Semitism paved the way for the Holocaust. See: https://goingplacesfarandnear.com/the-holocaust-what-hate-can-do-at-museum-of-jewish-heritage-holds-lessons-warning-for-today/).

There was an effort in Wittenberg to “solve its Judensau conundrum” by turning the site into a Mahnmal – a memorial to the Jewish people.

“After five years of deliberation, those in charge of the project decided that the Judensau would remain—but they would add a memorial to the Jewish people. Unveiled in 1988, it is now installed on the ground in bronze. Two crossing lines are surrounded by text that reads: “The proper name of God, the maligned Schem-ha-mphoras, was held holy by the Jews long before the Christians. Six million Jews died under the sign of a cross.” Alongside those German words is a Hebrew quotation, the beginning of Psalm 130: ‘Out of the depths I cry unto Thee, O Lord’,” Schaeffer writes.

Neither of these are included on the map, and I miss them entirely, thinking that the sculpture is in the Castle Church.

But I do find the Cranach House. I’ve become fascinated with Lucas Cranach who turns out to have been an apothecary as well as important artist whose portraits filled the Luther House, and whose works decorate many church altars (including the one we had just visited in Meissen). You can visit the original apothecary (it’s still a pharmacy), and then go through to a courtyard where the Cranachs would have lived and today there is an art school. He and his son also served as Wittenberg’s burgomaster (mayor).

I later learn how important Lucas Cranach the Elder was in popularizing – spreading – the Reformation. Cranach was the court painter to the electors of Saxony in Wittenberg, ground zero for the Protestant Reformation. His patrons were powerful supporters of Martin Luther and he embraced the movement, using his art to spread the new faith. Cranach made numerous portraits of Luther – several that we see in the Luther House – and provided woodcut illustrations for Luther’s German translation of the Bible. Cranach became such a close friend of Martin Luther that he was best man at Luther’s wedding and later godfather to his son. At some point, the duke gave Cranach the monopoly for selling medicines at Wittenberg and a printer’s patent with exclusive privileges as to copyright in Bibles. Cranach’s presses were used by Martin Luther. His apothecary shop was open for centuries, and was only lost by fire in 1871.

I notice that apartments on the second floor of many buildings through the town have names of their important occupants: Maxim Gorki (1903), Johann Christoph Friedrich von Schiller, German playwright, poet, and philosopher. Jeremias Trautmann, German physician who performed the first completely documented cesarean section, in Wittenberg, Germany, on April 26, 1610.  And very close to the Castle Church, one name really stands out: Harriet Beecher Stowe (who wrote “Uncle Tom’s Cabin”), who lived here in 1852.

I make it to the famous door of the Castle Church where, on October 31, 1517, Martin Luther is said to have posted his 95 Theses, challenging the notion that indulgences can buy salvation, setting off The Reformation.  The old wooden Theses Door was lost when the church was destroyed by fire in 1760. In 1858, King Frederick William IV of Prussia funded the bronze door with the Latin theses.

I don’t have time to go into the Castle Church (the Elbe Princesse group that was guided did). You can also pay a small fee to climb the tower.

I really would have liked more time to explore Wittenberg, a truly beautiful and well preserved historic village. (You can purchase an audio tour of the sites.)

We get back on the bus and then back on the ship for lunch, and then a relaxing afternoon sailing to Burg. In the evening, we have another marvelous dinner and entertainment. Tomorrow, we discover why Magdeburg is so interesting.